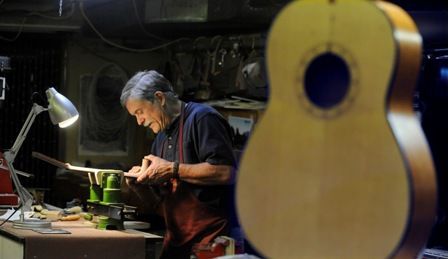 Luthier Andy Bennett can spend 200 hours or more on a single guitar. Photo by Jerilee Bennett, the Gazette 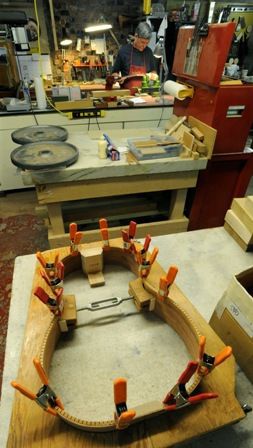 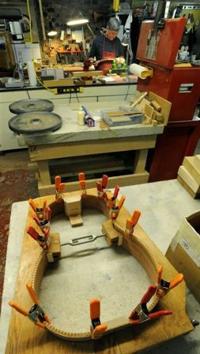 Andy Bennett works on the neck of a guitar in his workshop in the basement of The Dulcimer Shop in Manitou Springs. Photo by Jerilee Bennett, the Gazette

Andy Bennett holds a guitar neck in the works. Bennett has been building guitars for more than 40 years. The wood and how it is put together help create each guitar's unique sound. Photo by Jerilee Bennett, the Gazette

Luthier Andy Bennett can spend 200 hours or more on a single guitar. Photo by Jerilee Bennett, the Gazette

Andy Bennett works on the neck of a guitar in his workshop in the basement of The Dulcimer Shop in Manitou Springs. Photo by Jerilee Bennett, the Gazette

Andy Bennett holds a guitar neck in the works. Bennett has been building guitars for more than 40 years. The wood and how it is put together help create each guitar's unique sound. Photo by Jerilee Bennett, the Gazette

Down a wood staircase behind a shop counter in Manitou Springs lies a dark, cool world of musical magic.

Bennett is a guitarmaker — or luthier — and he has been making and repairing guitars and dulcimers from this warrenlike basement for five years.

Amid a renaissance of interest in acoustic guitars and instrumentmaking, the 61-year-old is pursuing a craft he learned 40 years ago, and fine-tuning it into an art form.

“Andy, first of all, is one of the best craftsmen I’ve ever seen,” said Paul-David Almond, a local musician who has played guitar around the Springs for 22 years and owns nearly a dozen guitars.

“He has elegant designs, and the tone he gets out of his guitars, especially for the size, is just phenomenal.”

Instrumentmakers in the Springs echo Almond; Nathan Fisher, a guitar repairman with clients who own Bennett guitars, said Bennett is a “meticulous craftsman.”

No two instruments are alike with their variations in wood and styling, and design touches such as abalone-shell inlays. It explains why someone would pay $6,200 for a Bennett guitar, as a customer on Martha’s Vineyard recently did.

“That guitar will be a collector’s item,” said Bennett’s older brother, Reb, a retired luthier. “Nobody has a guitar like that. He’s going to open that case up and people will fall over backwards.”

What sets Bennett apart from most instrumentmakers is that he has had a career as a luthier, his brother said.

Many luthiers are retirees who take up guitarmaking or folks who make them as a hobby; few devote their livelihoods to the profession, like Bennett has since he accepted his brother’s invitation to work in his small guitar shop in Longmont in 1970.

Bennett learned under Reb and his partner, banjo- and guitarmaker Monty Novotny, at NBN Guitars. It became well-known among musical legends including James Taylor, Paul Simon and Stephen Stills of Crosby, Stills and Nash.

NBNguitars.com includes an archive of news stories at the time documenting the shop’s cult status, including photos of Stills and others playing NBN guitars.

Boulder in the 1970s was a popular destination for many popular musicians including members of Buffalo Springfield and James Gang, Elton John, Tom Petty and John Denver, according to GetBoulder.com, and many of them showed up at NBN.

Catering to the greats created many fond memories for the Bennett brothers.

“We would shut down and play volleyball and drink beer when they’d show up,” Andy Bennett said. “We just sat there with our mouths open and watched these guys play guitar.”

Those days are long over. Reb Bennett is retired, and Novotny died several years ago.

But Andy Bennett is carrying on from his Manitou workplace. He figures that during his career, including a 15-year stint at Guild Guitars in Maryland, he has made or helped create more than 90,000 guitars.

He stepped away from guitarmaking a few times, working in carpentry and Pilates-equipment industries.

Bennett came to the Manitou Avenue shop after hearing the owners, Bud and Donna Ford, were looking for a guitarmaker. Bud Ford said he knew of NBN Guitars from an instrument show they had all attended in the early 1970s in Kansas. Ford was happy to bring Bennett to the shop, and Bennett embraced his basement workspace.

Wood is stacked along each wall and piled on chairs and worktables: mahogany from Honduras; rosewood from India; cherry, maple and birch. Some of the wood is nearly as old as Bennett’s guitarmaking career. It comes from a business Ford purchased in the late 1970s and had been piled in the basement for nearly 30 years when Bennett was hired.

Wood is an essential part of the luthier’s craft; it can make or break an instrument’s sound, and it gives handmade guitars individual voices.

“The woods are the whole deal,” Bennett said. “This was a tree in Africa probably 10 years ago, and all the trees are different.”

Bennett’s guitars are expensive partly because of the time each takes to create. He spends 75 to 200 hours on each guitar, and he makes about 12 a year.

The process begins with wood selection; he then planes the wood with old, industrial-era equipment to a thin sheet he can shape into the guitar back, sides and front. After the parts are roughed, Bennett shapes them with heat and water and fits all the parts together. He carves the guitar necks by hand, and finally coats the instrument with several layers of shellac and varnish — a two- or three-week process.

Despite the tough national economy, Bennett’s businesses hasn’t slowed down. In fact, there’s a six-month wait for people interested in buying his guitars, which sell for about $2,000 to more than $6,000.

Even after so many years, each guitar is a new experience for Bennett.

“Somebody asked me what I’d do if he moved on down the road,” Bud Ford said. “I said, ‘Well, after I finished crying, I’d figure it out from there.’

An Aurora woman has built a business out of making artsy running jackets.