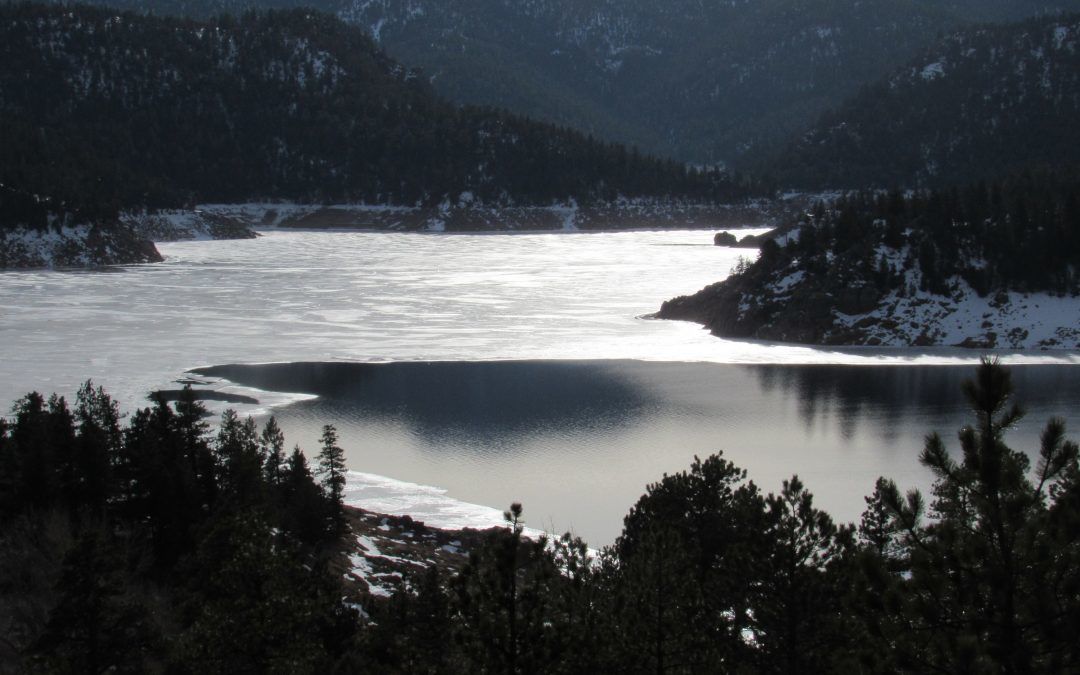 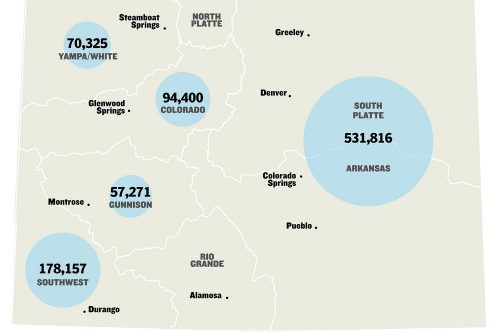 If drought and climate change continue to sap the river’s flows, and a legal crisis erupts with downstream states, six of the state’s eight major river basins could be forced to give up water. The Front Range and Eastern Plains are most vulnerable if shortages hit the river downstream and could lose as much as 97 percent of their Colorado River supplies. 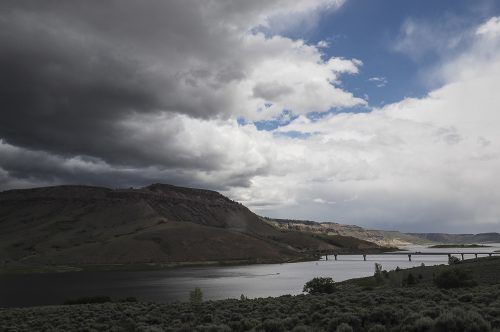 Water sufficient for more than 1 million homes on the Front Range could be lost, and thousands of acres of farmland on the eastern plains and Western Slope could go dry if the state can’t supply enough water from the drought-stricken Colorado River to downstream states as it is legally required to do, according to a new study.

Among the key findings:

• In the next 25 years, if the state does nothing to set more water aside in Lake Powell, the Front Range could lose up to 97% of its Colorado River water.

• All but two of the state’s eight major river basins, under that same “do nothing” scenario, also face dramatic water cutbacks.

• If Colorado, Wyoming, Utah and New Mexico increase their water use by as little as 11.5%, as predictions indicate they will by 2037, the risk of a legal crisis spurring such cutbacks on the river doubles, rising from 39% to 78%, under one scenario, and 46% to 92% under another.

“That’s an important takeaway because when you begin to realize the extent of potential damage, whether it is on the (Western) Slope or the Front Range, then we all come to the realization that we have a shared risk,” Mueller said.

The study was conducted by Boulder-based Hydros Consulting and released in June. It looked at different scenarios for the way river conditions and reductions to diversions could play out, as well as ways to reduce the risk cities and farms face, including spreading the cutbacks proportionately among all the river basins, something that isn’t typically done.

‘A bit of scare tactics’

Front Range water utilities are wary of the study and have begun a new round of analysis to determine if they agree with the results.

Alex Davis is a water attorney for the city of Aurora. At a recent forum on the risk study, she said that the chances of a Colorado River crisis were being exaggerated. And the study acknowledges that under some scenarios the risk of such a legal crisis is low.

“All of this talk is helpful to get people to think about the issue, but it also seems like a bit of scare tactics. If the Lower Basin states did try to do something, there would be a whole number of reasons (they would not get far),” she said.

Including the fact that the Lower Basin states continue to overuse their share of the river by about 1.2 million acre-feet a year. Before Colorado and its Upper Basin neighbors were asked to cut back, the Lower Basin would have to do additional cutbacks as well, she said.

Though the Colorado River flows west, and originates in Colorado’s Never Summer Mountains in Rocky Mountain National Park, a large volume of its flow, more than 530,000 acre-feet annually, are pumped east through the Continental Divide to the state’s Front Range cities, including Denver, Colorado Springs, Pueblo, Boulder, Fort Collins and Broomfield, among others. That’s enough water to supply 1.06 million homes or to irrigate more than one-half million acres of crops.

Because these water users built their tunnels and reservoirs decades after the 1922 Compact was signed, they could be among the first to be cut off. Denver’s largest storage pool, Dillon Reservoir, was completed in the 1960s. Front Range cities and farms would lose 97% of their Colorado River supplies if those diversions were completely shut down, according to the study.

“You have to start with the fact that 50% of the water on the Front Range comes from the (Western) Slope. Should the Upper Basin fail to meet its delivery obligation, half of water use on the Front Range would be curtailed. That’s an enormous problem,” said Brad Udall, a senior climate and water scientist at Colorado State University’s Colorado Water Center.

Other parts of the state also face risk, some more than others. The Yampa River Basin, home to Steamboat Springs, would lose slightly more than 70,000 acre-feet of water, or 30% of its Colorado River supplies.

The Gunnison Basin, where agriculture controls historic water rights that predate the compact, is better protected, with the potential to lose just over 57,000 acre-feet of water, or 10% of its share of the river.

But a large swath of the southwestern part of the state would also be hard hit. Despite the historic farm water rights in this region, several small communities and irrigation districts built reservoirs after the compact was signed, just as cities did on the Front Range, meaning that those stored water supplies are also at high risk. In this basin, 178,000 acre-feet of water, roughly 36% of its Colorado River supplies, could be lost, according to the study.

The likelihood of ongoing drought and hotter summers only deepens the uneasiness over the river’s ability to produce the amount of water the state once relied on.

“We don’t expect to see cooler temperatures in the future, we expect to see warmer temps,” Mueller said. “If that is true, then we have to plan on reduced water supplies within our state.”

The study comes as the Colorado Water Conservation Board (CWCB), the lead water policy agency in the state, is examining whether to launch a massive, voluntary conservation program that would allow the state and its neighbors to save some 500,000 acre-feet of water and store it in a newly authorized drought pool in Lake Powell. The pool, to be used only by the Upper Basin states, could help protect Colorado and its neighbors if drought and climate change continue to sap the river’s flows.

Michelle Garrison is a modeler with the CWCB who has analyzed the study’s results. She said the scenarios it considered are important for comparative purposes and may help the Western Slope and Front Range collaborate on any water cutbacks, something that hasn’t always occurred in the past.

“It’s a tough one,” she said. “The hydrology in the Colorado River has always been extremely variable and it’s predicted to become even more variable. But I’m really pleased to see them sharing their results.”

In places like the Yampa Basin, if the state cut back water use based strictly on prior appropriation, where water right dates determine who gets water first in times of shortage, Stagecoach Reservoir, the most significant storage pool in the valley, could be shut off because its storage rights date only to the 1980s. And residents would be hard-pressed to cope if another long-term drought drained the river and their only source of stored water was no longer able to refill.

Kevin McBride is manager of the Upper Yampa Water Conservancy District, which owns Stagecoach. He, like dozens of other water managers across the state, is still contemplating the options. (Editor’s note: McBride serves on the board of Water Education Colorado, which houses Fresh Water News.)

“Generally being safe from drought is what it’s all about,” McBride said. “But how do you get there?

“It’s complicated and it comes down to how it’s done.”

McBride and others on the Western Slope are asking for another round of modeling that would examine more equitable ways to cut back water use, so that no one takes the brunt of the reductions.

With insurance, or without?

Others have suggested that the state should let the rules embedded in the 1922 Compact and Colorado’s water rights system play out, rather than creating an expensive, legally complex water conservation program.

Anne Castle, a senior fellow at the University of Colorado’s Getches-Wilkinson Center for Natural Resources who specializes in Colorado River issues, said that going without a major conservation program carries its own set of very high risks, such as decades of expensive lawsuits or unplanned water shortages.

Over the next several months, the state will continue to examine how best to protect its Colorado River water as part of drought planning work it is engaged in with the other Upper Basin states. Late next year, all Colorado River Basin states will begin negotiating a new set of operating guidelines for the entire river system, designed to bring it back into balance and slash the risk of major cutbacks.

“Truly, one of the points of this risk study is to make sure that anyone who is at risk understands the risk,” Mueller said. “If you’re a water planner, it may set off some alarm bells. But we don’t want people to panic. The hope is people will look at this and say, ‘Our community is at risk … what are we going to do about it?’”

Jerd Smith is editor of Fresh Water News. She can be reached at 720-398-6474, via email at jerd@wateredco.org or @jerd_smith. Fresh Water News is an independent, non-partisan news initiative of Water Education Colorado.

The game we see in Washington is not usually the game being played. And there’s no bigger football than conservation right now.