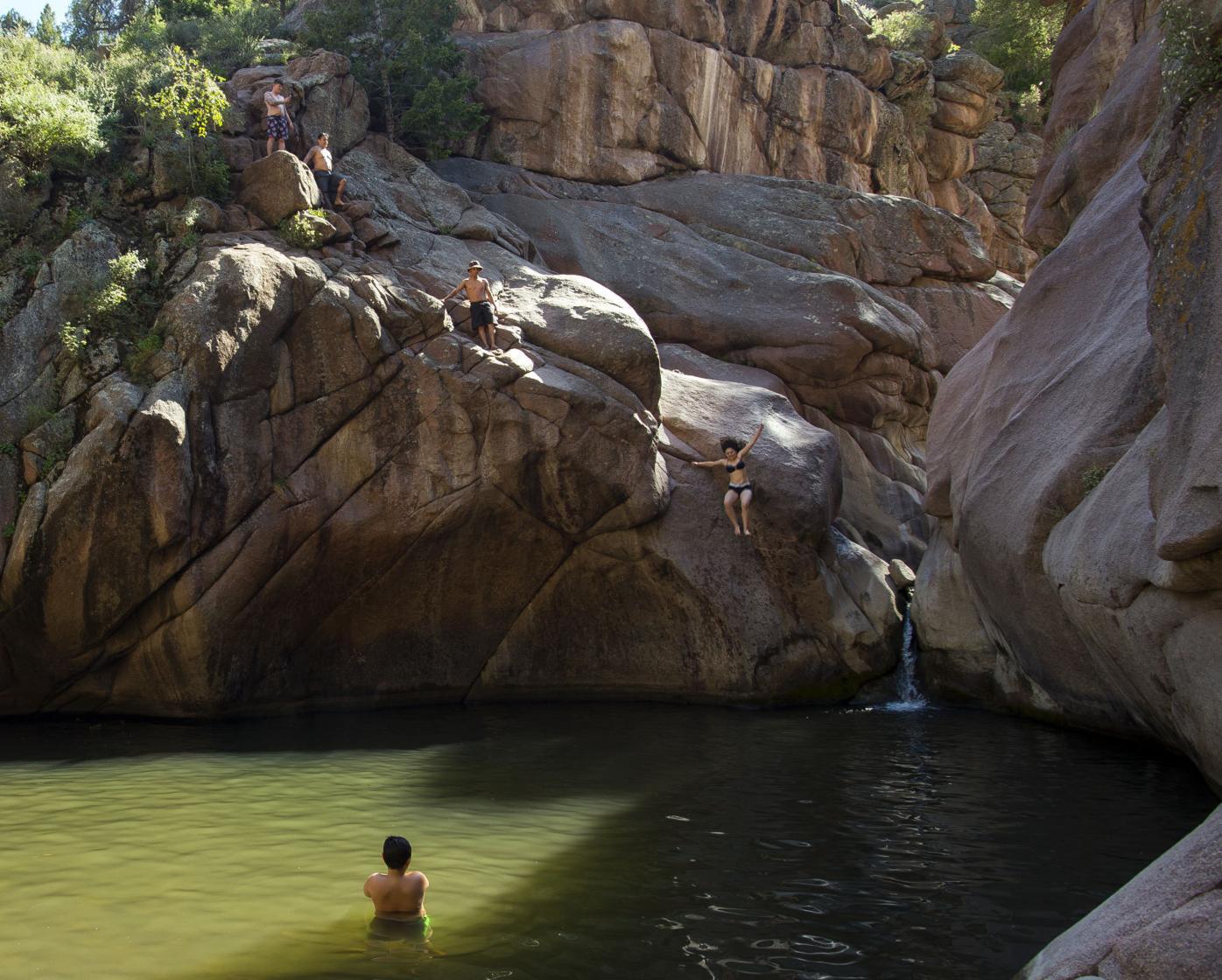 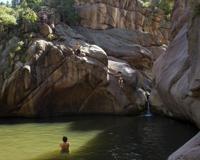 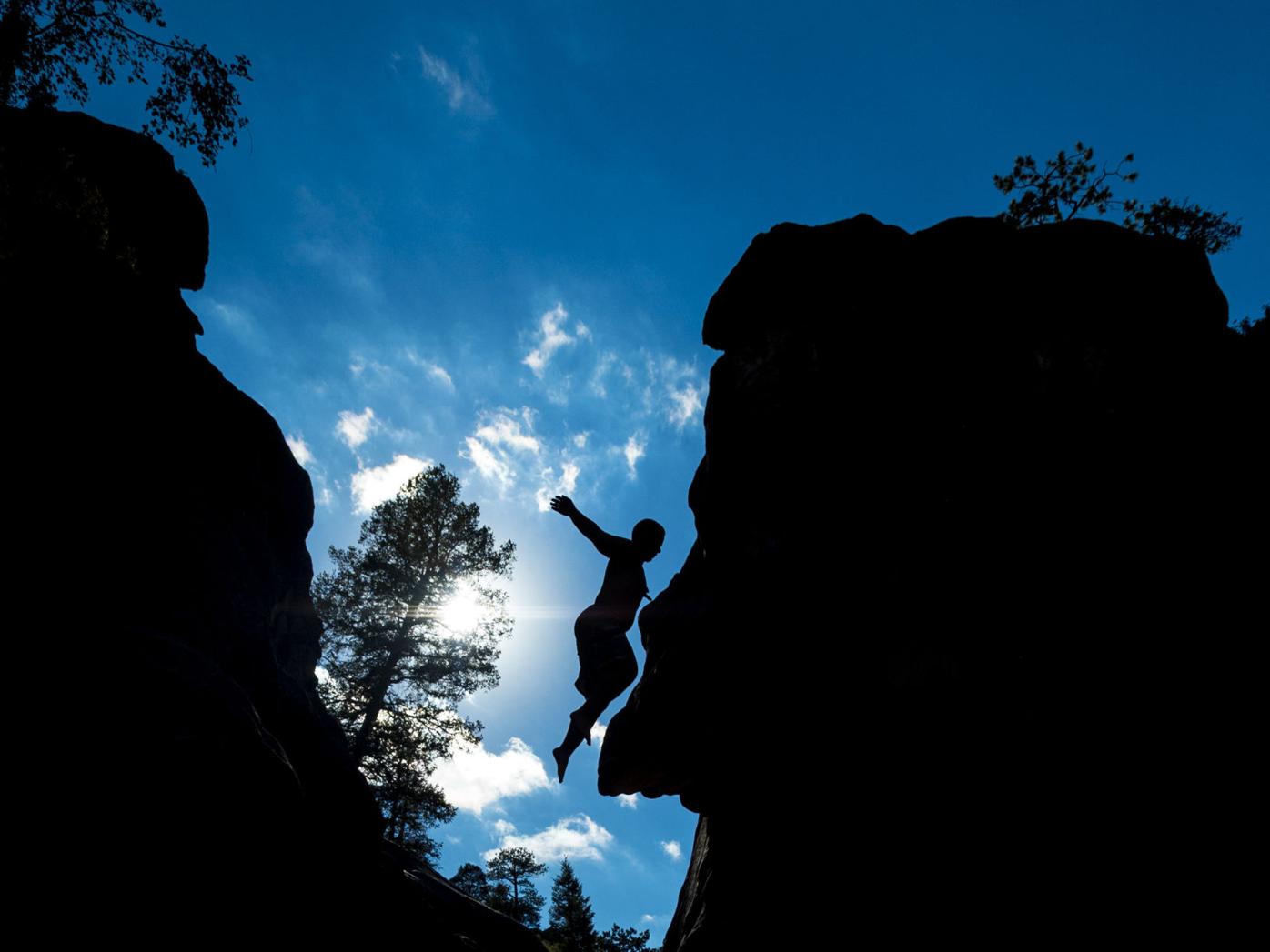 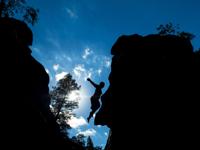 Jump Off A Cliff (Into Water, Of Course) If you're an adrenaline junkie, one Colorado activity you'll love is cliff jumping. A couple places perfect to take the leap are the Devil's Punchbowl near Aspen and Guffey Cove near Divide. Keep in mind that this is a dangerous sport and you'll be participating at your own risk.

Jump Off A Cliff (Into Water, Of Course) If you're an adrenaline junkie, one Colorado activity you'll love is cliff jumping. A couple places perfect to take the leap are the Devil's Punchbowl near Aspen and Guffey Cove near Divide. Keep in mind that this is a dangerous sport and you'll be participating at your own risk.

New this summer at the popular Paradise Cove diving and swimming hole near Guffey: no alcohol, no loud music, no unleashed dogs and no parking outside designated areas.

And as of a few weeks ago, there's a $6-per-vehicle daily fee to access the remote, 80-acre spot formally known as Guffey Gorge.

But some in pursuit of paradise are ignoring the changes, said Park County Sheriff Fred Wegener.

"It's still used heavily," he said Monday. "And folks disregard the signs. They park anywhere they want. And we're still getting folks climbing the rocks to jump in the water hole and getting hurt."

At least three people injured themselves over the past few weeks by diving from 80-plus-foot granite cliffs into the waterfall-fed natural pool, Wegener said. A damaged ankle, a separated shoulder and other injuries have been reported, he said.

Over the Fourth of July holiday last year, a woman was airlifted to a hospital after she belly-flopped from an 83-foot ledge.

Signs warn users of potential dangers from cliff diving, which is not prohibited but cautioned as risky.

"It is a beautiful spot," Wegener said. "Please enjoy it responsibly."

The Bureau of Land Management's Royal Gorge Field Office has been working for years to make environmental and safety changes to curb misbehavior at the off-the-beaten-path recreation area in Park County.

"As stewards for this unique area, we are committed to keeping Guffey Gorge healthy and productive," Field Manager Keith Berger said in a December news release, when his office finalized the stricter rules.

The regulations are based on a 2015 management plan and intended to "reduce conflicts among users, reduce public health and safety concerns, and reduce impacts to natural resources that have resulted from significant increases in visitation over the past five years," according to Berger.

Record numbers of users have turned Paradise Cove - revered for its gorgeous scenery, swimming, hiking and picnicking - into party central in recent years.

But while having fun in the sun, some visitors have gotten drunk, littered, polluted Fourmile Creek with human waste, blasted music and blocked the roadway, among other undesirable conduct, neighbors said during a public input period in 2016.

The area is surrounded by private land, and residents have been complaining for years about the lack of control at the site.

"It's a complete disaster," said Kaleb, who declined to give his last name and lives a few miles from Paradise Cove. "Nobody ever used to know about it, and now everyone knows about it."

Paradise Cove had been a swimming hole for locals but with social media has become a popular destination.

"As its popularity increases, it's becoming more difficult to protect the natural setting and ensure public safety," Berger previously told The Gazette.

The new regulations were to have taken effect last summer but were delayed, as the fee system was finalized, Berger said.

The daily fee is projected to raise up to $26,000 annually and pay for improvements, such as lavatories, as well as maintenance and staff, he said. Payment can be made on site and will be charged through Sept. 30, then resume again next May.

The changes have produced mixed reactions from cove-goers, some of whom support more oversight and a user fee. Others have told The Gazette that making the unusual natural area a bona fide attraction ruins the appeal.

To enforce the rules, BLM rangers and sheriff's deputies routinely patrol the site.

Drivers who park in undesignated spots can be ticketed with a "parking where prohibited" violation, the sheriff said.

One highly anticipated trail in the Pikes Peak region could be finished next month, while the opening of another has been delayed.