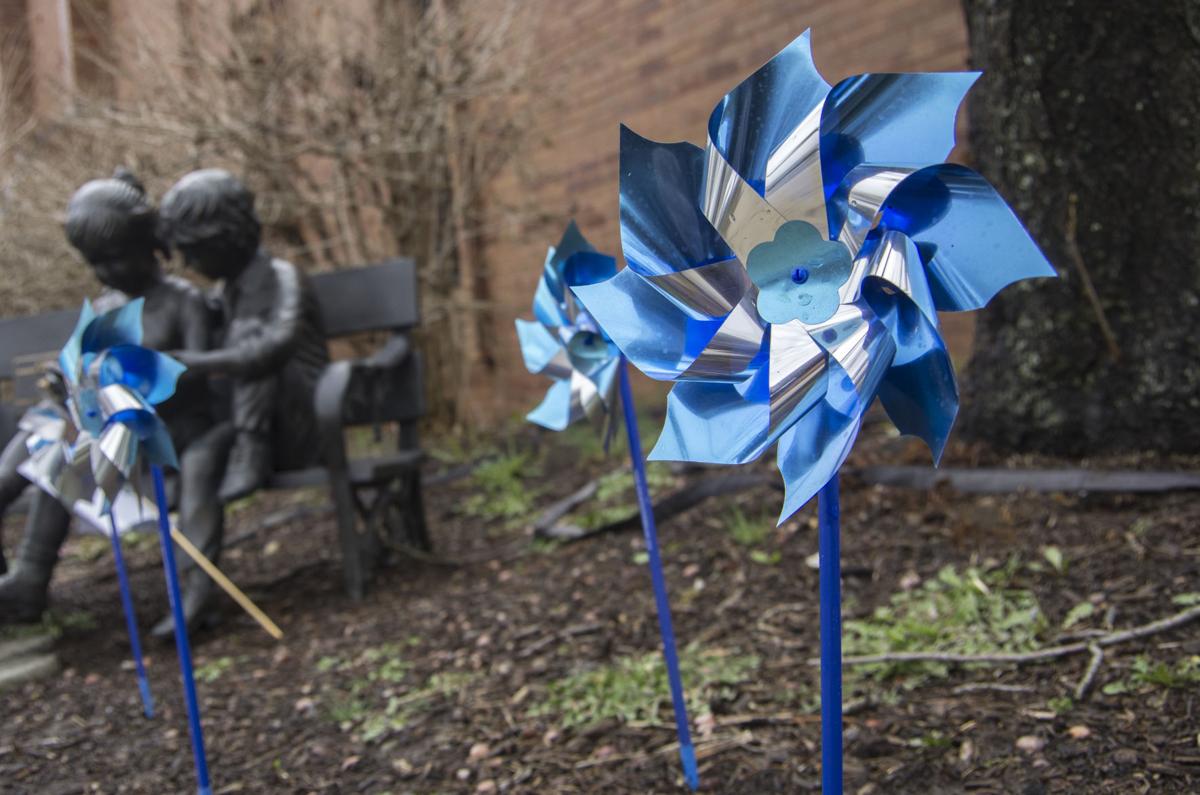 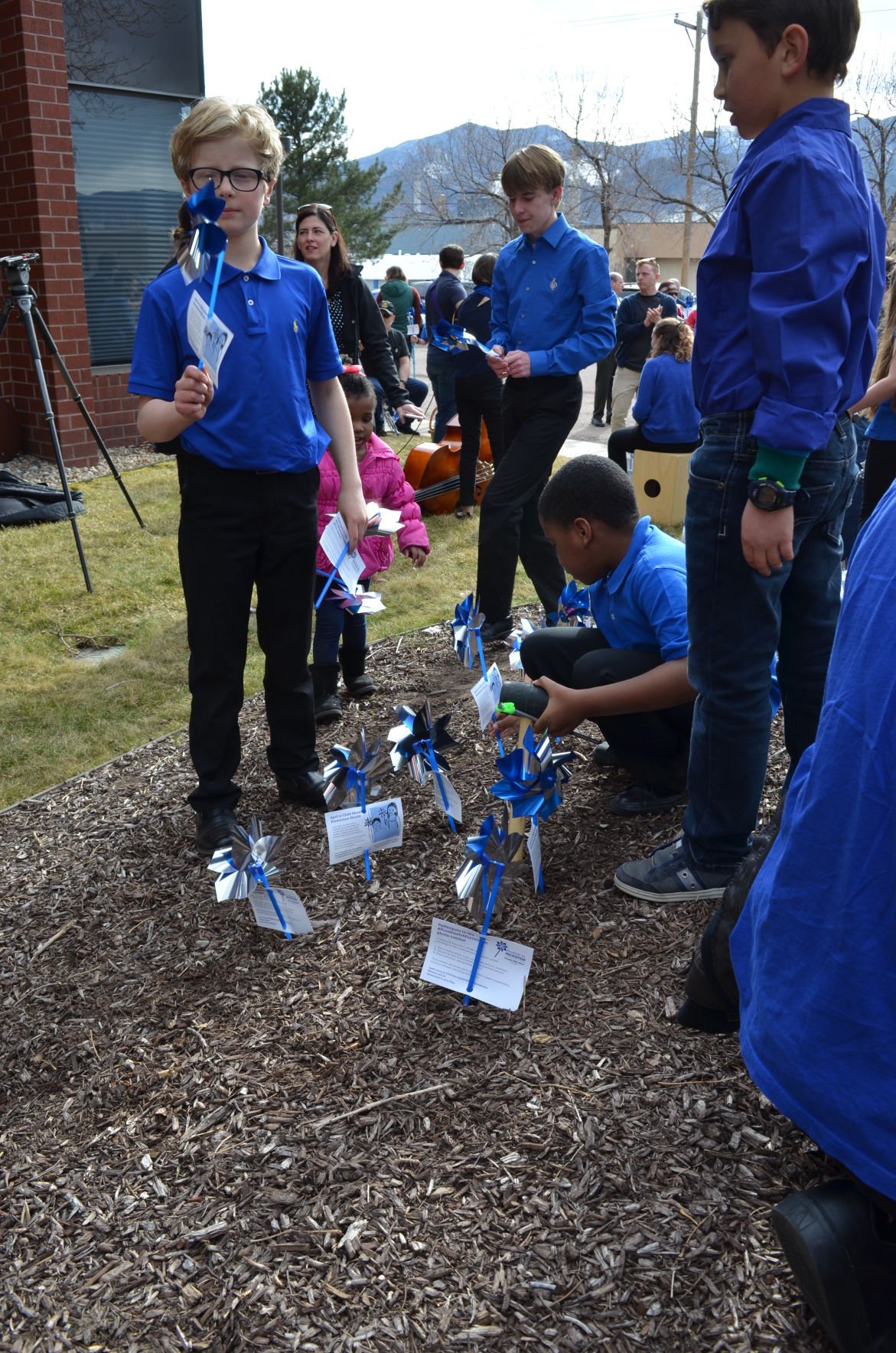 A group of children with the Colorado Springs Conservatory sung about home April 1 then planted more than 200 pinwheels in front of the Conservatory to mark the start of Child Abuse Prevention Month. Photo courtesy of El Paso County 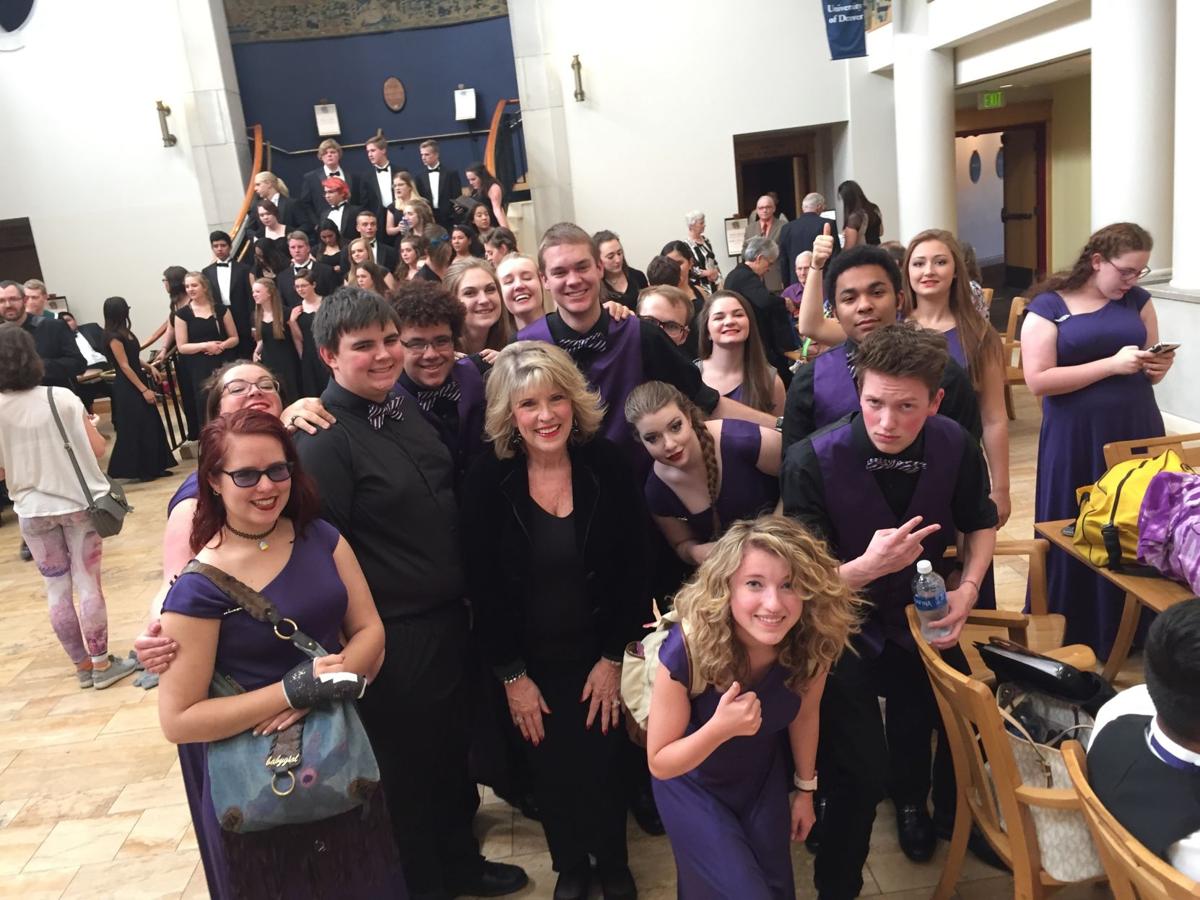 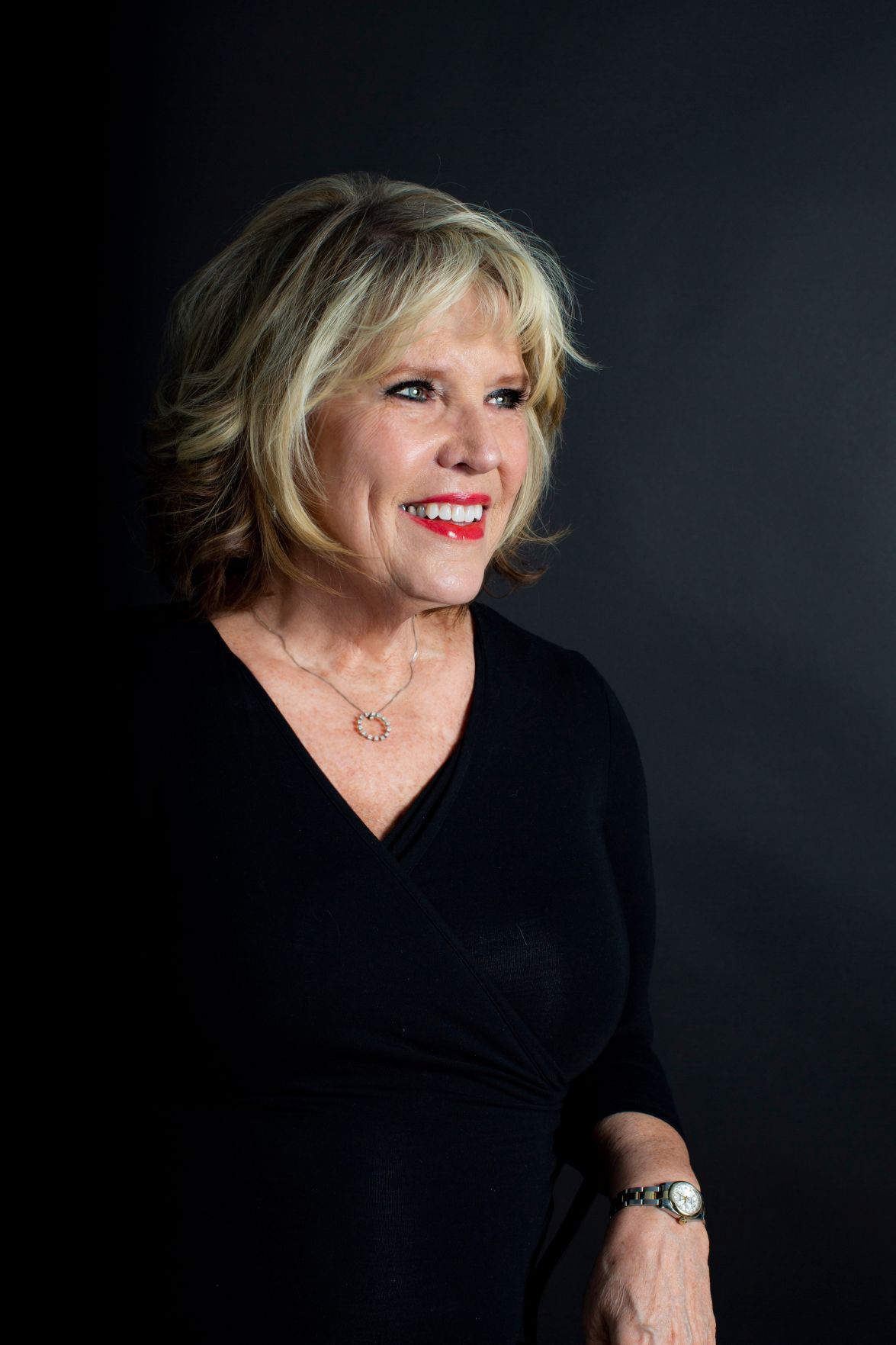 Paula Baack spent 46 years as a teacher to kindergarten through college students in Nebraska, Arizona and Colorado. She retired from Air Academy High School in 2017. Courtesy photo

A group of children with the Colorado Springs Conservatory sung about home April 1 then planted more than 200 pinwheels in front of the Conservatory to mark the start of Child Abuse Prevention Month. Photo courtesy of El Paso County

Paula Baack spent 46 years as a teacher to kindergarten through college students in Nebraska, Arizona and Colorado. She retired from Air Academy High School in 2017. Courtesy photo

No one talked to her about what she should do if she suspected a student was at risk.

No one talked about those kinds of things, at all.

“We were given no training. I never really thought, as a young teacher, of looking out for an abused child,” said Baack. “I believe we were still in that mindset, where … what you do behind closed doors is nobody else’s business.”

Today, in Colorado and every state that doesn’t place the responsibility on all adults, teachers are among a group of professionals considered “mandatory reporters,” meaning they’re legally required to report suspected child abuse.

With school off and society isolated behind closed doors as part of sweeping efforts to slow the coronavirus curve, many are worried that a steep drop in the number of calls to child abuse hotlines is the opposite of good news.

“Of course, during the school year, we might see more reports from mandatory reporters than in the summer,” said DHS spokeswoman Kristina Iodice. “But we have never experienced a kind of drop in calls that we have experienced recently.”

Intake workers also say there’s been an increase in the severity of reports coming in during the shutdown, said Julie Krow, the department’s executive director.

While only a fraction of calls — from mandatory or citizen reporters — are confirmed cases that enter the legal system, workers who deal with the human side of the statistics say the recent drop has them worried about what's happening, effectively, off the grid.

Colorado schools should prepare for possibility of not reopening in the fall, Polis tells superintendents

“Child abuse and neglect was already a crisis. So now, it’s still a crisis, and it’s going to be a bigger crisis,” said Keri Kahn, communications manager at CASA of the Pikes Peak region, a nonprofit organization that trains and supervises volunteers who advocate in court for the victims of child abuse, neglect, and severe domestic conflict. “We expect to see a rise in the cases that are coming through the system after kids are back around mandatory reporters again, when they’re back in school.”

Each year, the majority of calls to child protective services comes from mandatory reporters, and a significant number of those calls are from teachers, school staff and child care providers — up to 55% in El Paso County, depending on the time of year.

That’s because teachers get to know children and families in a way few other professionals can.

“We see them almost every day. We have the opportunity … to check in with families face to face, if nothing else when they are picking up or dropping off children,” said Noreen Landis-Tyson, president and CEO of the nonprofit Community Partnership for Child Development, which runs preschool and Head Start programs in Colorado Springs. “Over a period of time, you get to know families well. You get to know what’s stressing them out, what is typical behavior for a particular child, and what is atypical.”

When teachers have that level of connection with children and families, they’re able to ask the kinds of questions that, worst case, might reveal troubling details that spur a deeper investigation.

More often, though, such interactions allow teachers to clear up misconceptions, and lead to understanding and the extension of additional support during tough times.

“We come from a strength-based approach. We don’t judge parents, we ask questions,” Landis-Tyson said.

“We’re on the phone with families constantly, and we’re doing Zoom meetings and virtual learning, but it’s not the same thing,” Landis-Tyson said. “It worries the heck out of us that we don’t have that one-on-one contact, either with children or families at this point.”

With the stress of job losses, health worries and the added pressure of supervising both learning and free time for kids who are now at home round the clock, the factors weighing on families in the pandemic era are a new kind of powder keg, said Krow.

“If there is domestic violence in a home, that could be an additional stressor in a family that has everybody there at the same time,” she said. “So there are a number of reasons that we think the (child abuse) reports should at least be stable and perhaps be increasing at a time of significant stress for our community.”

After the stay-at-home order was put in place, El Paso County saw a spike in felony domestic abuse cases, compared to the same time last year, and an increase in the severity of cases, said 4th Judicial District Attorney Dan May.

It’s not just oversight from teachers that’s gone away. With closures and safer-at-home orders still in place and probably extending well into summer, children are less likely to be in places — yards, parks, grocery stores — or participating in programs where they are visible to adults outside the family.

“I think the greatest concern is the inability for society to maintain an outlook for these children, society being neighbors, being the community,” Baack said. “It takes a village to raise a child. Well, that village right now has no contact with that child.”

A village’s legal, if not moral, responsibility to its children changed dramatically after the Child Abuse Prevention and Treatment Act of 1974, which provided federal funding to states, public agencies and nonprofits to establish systems for identifying, prosecuting and preventing child abuse.

In Colorado, failure to report suspected child abuse or neglect is a Class 3 misdemeanor for a mandatory reporter.

By the time Baack was in her second decade as a Nebraska teacher in the 1980s, she said she had a better understanding of her role as a gatekeeper, and also how to navigate the delicate and emotional minefield of her new responsibilities as a mandatory reporter.

Before a child could “pour out their heart,” Baack said she had to let them know that if what they were about to divulge constituted abuse, she was required, by law, to make a report. It wasn’t a betrayal of confidence, but her duty.

“What that did for teachers was actually a wonderful asset. It’s great teachers were afforded that tool, so that they could have that conversation,” said Baack, who retired in 2017 from Air Academy High School.

Looking back on her 46-years teaching music education and vocal performance to students at the kindergarten through college levels, in Nebraska, Arizona and Colorado, Baack said that, on average, she made between three and five reports each school year.

“My family was an abusive family. My mother and father raised me in a way there were times I feared for my life, and I’m not being over dramatic,” said Baack. “I’m sure that honed my ability to look at kids and watch kids and see the interactions and understand that there might be something that might not be going the way it should be in that home setting.”

Even so, she said she never made a report just based on hearsay or a “hunch.”

“Abuse has so many different meanings. Now we know it’s not just physical, it’s emotional, it’s neglect,” Baack said. “But kids can truly fall down. Parents can have a bad week. That doesn’t necessarily mean the home life is bad forever.”

Making a call, as to whether a situation is abusive, likely means spending the rest of your life second guessing that decision. The last thing a teacher wants to do is cause more trauma, but what if a decision not to act led to more harm?

“I think teachers tiptoe on eggshells,” Baack said. “But I also know my colleagues; if they see something that is emotionally fraught and they feel so strongly that this has got to be stopped, they will report it.”

When they can’t see it, though, they must trust in the safety mechanisms already in place, in school districts and communitywide, and hope students and parents do, too.

“I just think on a big philosophical level it has made all of us pause and reflect on just how powerful the school is as an institution in our society ... and in just how many ways we take care of the youth and families in our communities," said Bridget O’Connor, principal at Lewis-Palmer High School. "Every school and every district is really just trying to leverage every asset we have to continue to meet the needs of those students and those families."

Each state has its own child abuse reporting guidelines. Some require anyone who suspects abuse make a report, while others — including Colorado —encourage everyone to be vigilant, but only classify certain professionals as mandatory reporters. Here, that group includes doctors and teachers, as well as firefighters.

Since the Colorado Springs Police Department's school resource officers can't be at schools, they’re being “proactive” about staying in touch with at-risk families, said Sgt. Jason Newton, spokesman for the department.

“Of course, this isn’t an ideal setting, so we’re going to miss some … " Newton said. “But we’re doing everything we can to do welfare checks, maybe go to their home check on them, make a phone call for the kids that aren’t showing up to the Zoom classrooms.”

With oversight from mandatory reporters limited, the most important message Krow has for the community at large is: If you see something, say something. Call 1-844-CO-4-KIDS if you suspect abuse or neglect, or 911.

“The community plays an important role in preventing child abuse and neglect. That can mean anybody in the community. If you are not sure, go ahead and report," she said. "You might also be able to do something preventative. Listen to a friend or family or neighbor that is experiencing a lot of stress. We have a great community and there's many things that our own community can do to help during this time."

CASA of the Pikes Peak Region needs volunteers to advocate for abused and neglected children as the organization strives to meet its Vision 2020 goal of serving every child in need by the end of the year.

Community members who are interested in becoming CASA volunteers can learn more about the program at a virtual information session, by Zoom meeting, 11:30 a.m.-12:30 p.m. Tuesday.

To receive a link and login information, send an RSVP email to Uriko Stout at urikos@casappr.org.

If you suspect child abuse or neglect

One new coronavirus death and six new infections were reported in El Paso County on Sunday as the number of infections statewide grew by 410.