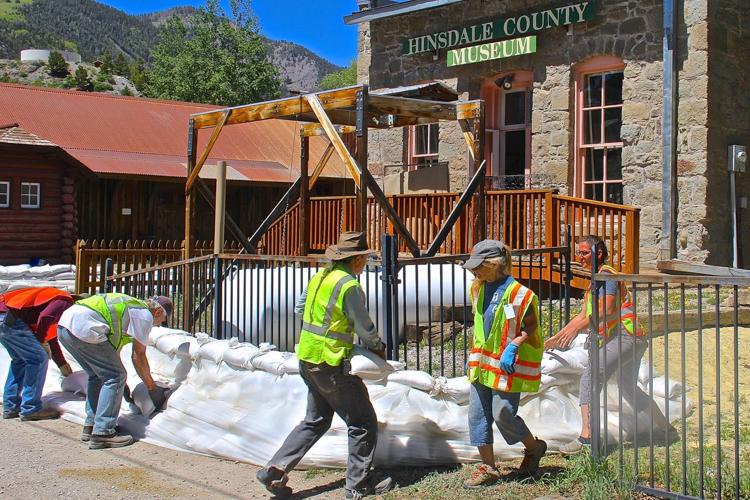 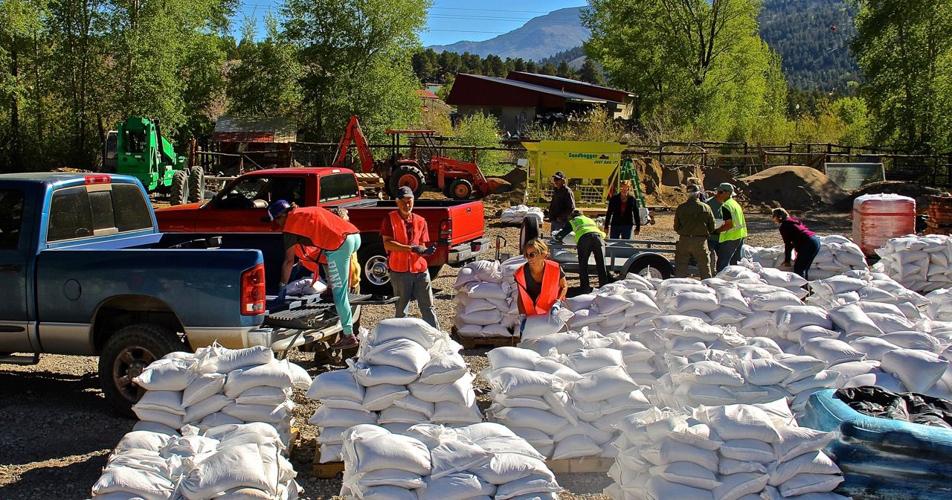 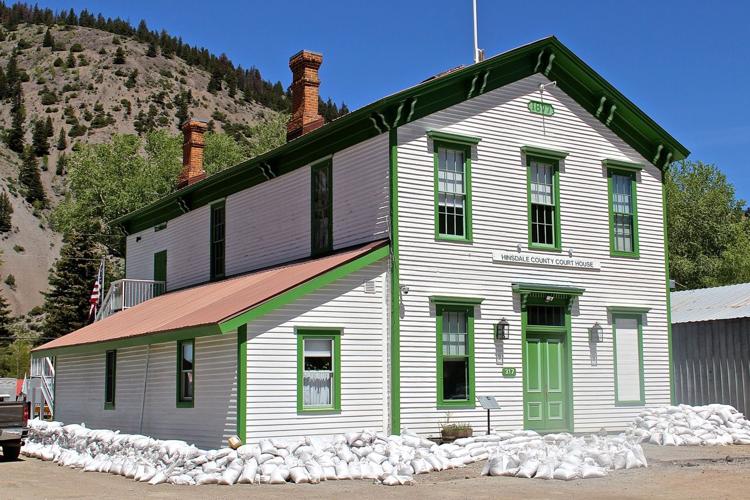 Sandbags have been placed along the Hinsdale County Courthouse in Lake City, among buildings being prepared for potential floods.

Sandbags have been placed along the Hinsdale County Courthouse in Lake City, among buildings being prepared for potential floods.

Rivers are raging at or near flood levels across Colorado, with plenty of snow yet to melt on many mountain ranges. With more runoff on the way and the rainy season approaching, communities are bracing for impact.

In Lake City this week, a small team finished building a deep channel 1,000 feet long — a diversion in case Henson Creek’s banks are breached, said the team’s Michael Davis. Another berm is being built closer to town to protect the historical buildings and unpaved roads.

“That means they’re coming from areas that have not slid in the past 300 years, and that also means we’re changing the topography of the mountains. So where we once had a dense forest of mature trees that held the snow and the rains, we now have a new slide chute.”

A slide chute for that debris to come rushing with water down into the creek, potentially building up, clogging and starting a chain of events that people on this side of the San Juan Mountains haven’t dealt with in generations.

Experts don’t predict a catastrophe, said Davis, among those deployed by the state Division of Homeland Security and Emergency Management. But he’ll help prepare residents and the waves of Texans who summer here. “We’re planning for the worst and hoping for the best.”

So it goes elsewhere in Colorado, where snowpack levels this week were absurdly high and deceiving (1,491% of normal Tuesday in the San Juans, for example). The numbers don’t indicate big snow as much as snow clinging much longer than usual. In several basins, almost half of the accumulations are waiting to melt.

The cool spring has moderated the runoff, a relief for Butch Knowlton, La Plata County’s emergency manager facing the increased chance of flooding after last summer’s 416 fire. “We couldn’t have written a better prescription,” he said of the weather patterns.

But he echoed his counterpart in Silverton: “We aren’t out of the woods yet,” Jim Donovan said.

San Juan County’s rivers are high enough to create “minor flooding,” Donovan said. “But we still have a lot of snow in the mountains, so we’re not assuming anything.” And that runoff plus heavy rain would create “a very unpleasant situation,” Knowlton said.

Heading into June, the Colorado Water Conservation Board warned that the delayed snowmelt might heighten the flooding risk and that the month is expected to be a wet one statewide. Predicting long-lasting high water, the board said unforeseen conditions, such as sustained warmth or rain, have led to floods even in years of low snowpack.

Flash flood advisories and warnings have lingered in several parts of Colorado this month. In Huerfano County, fear of washouts and mudslides remain after last year’s major wildfire. County officials and others with La Veta could not be reached Tuesday as they spent the day in debris management workshops.

On the other end of the San Luis Valley, residents of Del Norte and South Fork can’t remember when the Rio Grande looked so high. “We’re definitely seeing debris building up and water in places it hasn’t been in quite a few years,” said county spokeswoman Emily Brown.

Stretches of the river have been closed to boating and fishing, and RV parks were on voluntary evacuation last weekend. First responders are preparing equipment and sandbags, as they are in Lake City.

Volunteers have filled more than 20,000 bags, Davis said. On Monday, residents lined up in trucks and trailers to pick up free batches of 50.

"One lady came and got her 50, and she went home and did what she felt like she needed to do around her property and still had a few leftover," Davis said. "Well, instead of setting those aside in reserve, she brought those back. She thought one of her friends or neighbors would need some. I thought that was really cool."

A look back at Colorado's record-breaking ski season

Colorado ski resorts reaped the benefits of a very snowy winter in increased visitors and extended ski seasons, even using the busy season to …