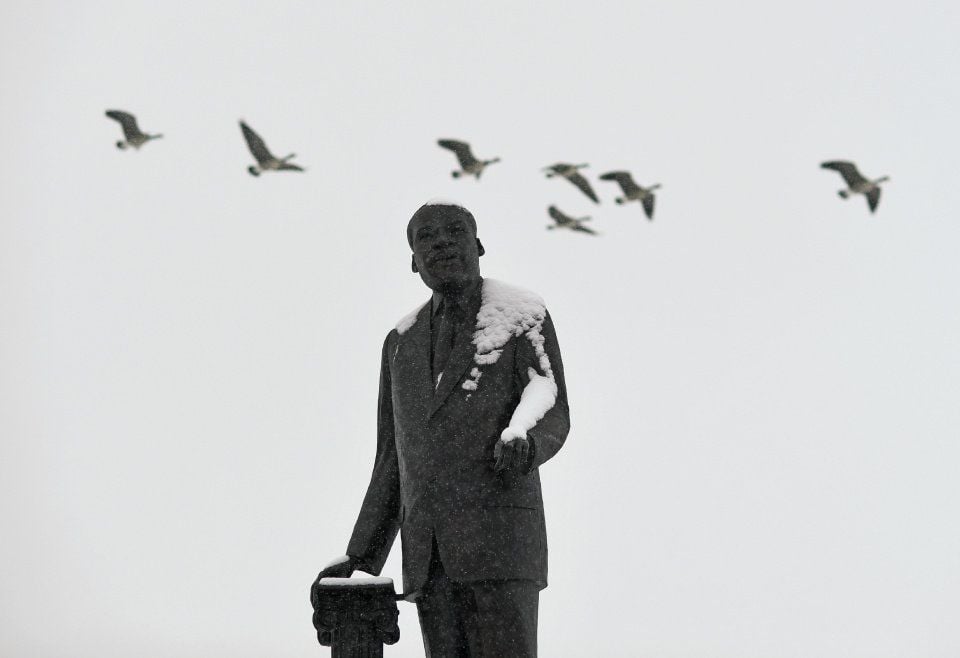 Martin Luther King Jr. is rightly lauded today as a crusader against the evil of American inequality and segregation.

But in 1965, at the height of King’s crusade, his critics, who were many, called him a communist. Be sure of this: Getting slandered with inaccurate names is part of the price, yesterday and today, of battling for change in America.

Lerone Martin, a professor at Washington University in Saint Louis, is finishing a book that reveals how the FBI smeared King as a communist.

“You can claim someone is a communist and that means they are anti-America and you can completely write off their claims as anti-American,” Martin says by phone from his home.

“To be communist is to be an atheist. You don’t believe in God. And what that did for Martin Luther King was rob him of any kind of moral authority. To say he was a communist, that was to say he was immoral.”

Want to take a 203-mile, one-day bike ride through the mountains? | David Ramsey

The FBI employed a surprising ally when smearing King. Under the direction of the often-befuddled FBI director J. Edgar Hoover, the organization reached out to Elder Lightfoot Solomon Michaux, a pioneering African American evangelist. Michaux became a friend and reliable ally to Hoover, who despised King.

In a 1964 press conference, Hoover said he doubted King’s sincerity as a minister or voice of righteousness. Instead, Hoover said, King was “the most notorious liar in the United States” and “one of the lowest characters in the country.”

Michaux served as an echo for Hoover. In the late 1940s, Michaux launched the first nationally broadcast religious radio show. On “The Radio Church of God” Michaux told hundreds of thousands of listeners that the Hoover-King feud was King’s fault.

King’s defiance of Hoover, Michaux said, opened “an avenue through which the Communists can infiltrate this country.” Michaux worried all African Americans would be damned by association with this “avenue.”

But that was only the start. What followed was one of the most bizarre and depressing scenes in 20th-century American history.

On April 1, 1965, according to Martin’s reporting, King and leaders of the Southern Christian Leadership Conference met at the grand Lord Baltimore Hotel, which is still welcoming guests in downtown Baltimore. King and the leaders were organizing a voter registration drive and economic boycott in Alabama as part of a push to pass the landmark 1965 Voting Rights Acts.

Michaux opposed the push. He believed, Martin says, the lone solution to American segregation and racism was Christian salvation. Only Jesus could transform men’s hearts, Michaux preached. Michaux declined to concern himself with mere laws.

King and SCLC leaders were met with what Martin describes as a “sacred ambush.” Michaux considered himself a prophet, and on this strange day in April, he and more than 100 of his followers marched outside the Lord Baltimore in a protest of King’s protest movement. Michaux’s march, Martin says, had been cleared with the FBI. Agents made sure hotel security did not hinder Michaux and his followers.

Michaux’s followers were singing and chanting while dressed in sack cloths, an Old Testament sign of mourning. Michaux told reporters an Alabama boycott would “destroy the progress the Negro has made” and “throw thousands of Negroes in Alabama out of work and into bread lines.” King and the SCLC leaders, Michaux said, were “communist infiltrators” who had rejected God and his teachings.

Michaux placed his faith in Hoover. He was convinced King’s efforts were doomed. He believed King, who was seeking a better America, was anti-American.

Michaux sought to silence King. The quickest and easiest method? Call him a communist.

“That way, Michaux could dismiss everything King was calling for,” Martin says. “King’s very voice could be dismissed. ‘Oh, he’s a communist. Don’t listen to anything he has to say.’”

In 1963, King delivered his majestic “I Have A Dream” speech on the steps of the Lincoln Memorial as part of a nation-altering March on Washington. King dreamed of an America that would, finally, embrace its revolutionary promise of equality.

A few days later, Michaux preached his rebuttal. Stop marching, Michaux ordered African Americans. Instead, Michaux called for his followers to “seek to do the will of God and be blessed.”

Michaux was blind to a crucial truth.

King, the man he slandered, was doing the will of God.

Washington's NFL franchise will change its nickname. That's good news, and nothing but.