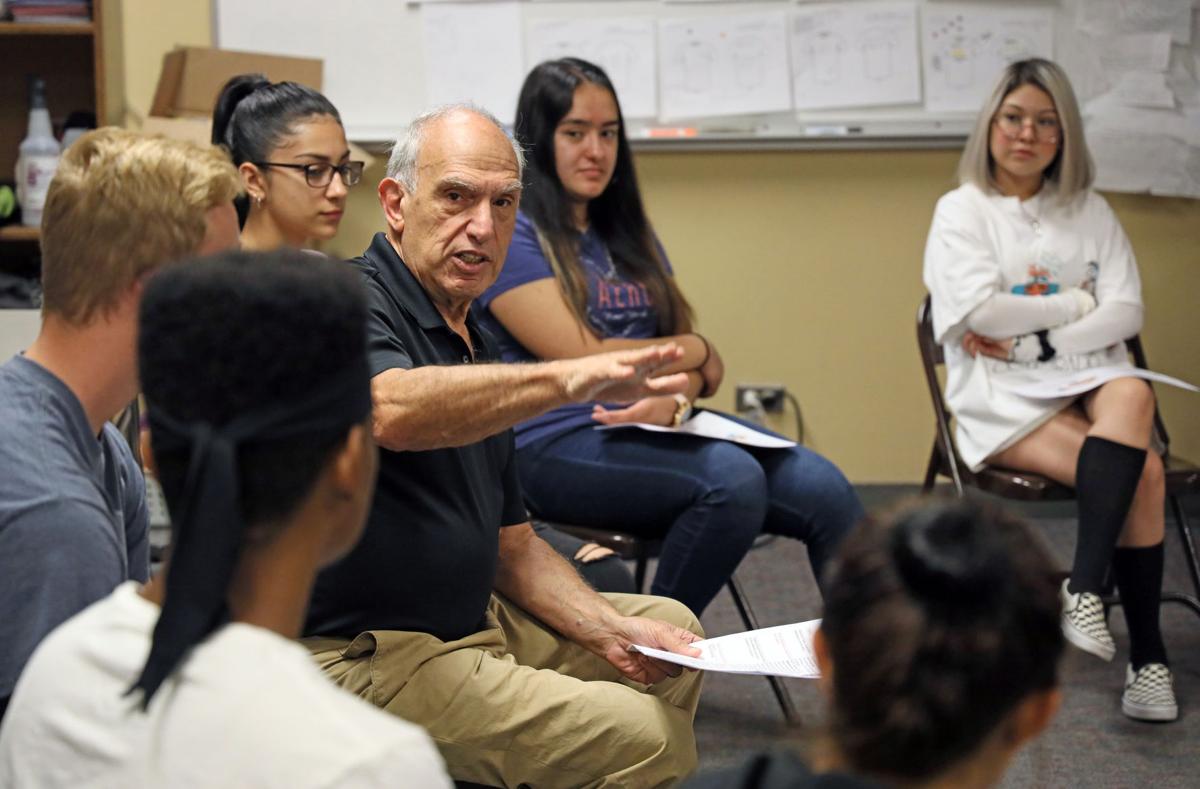 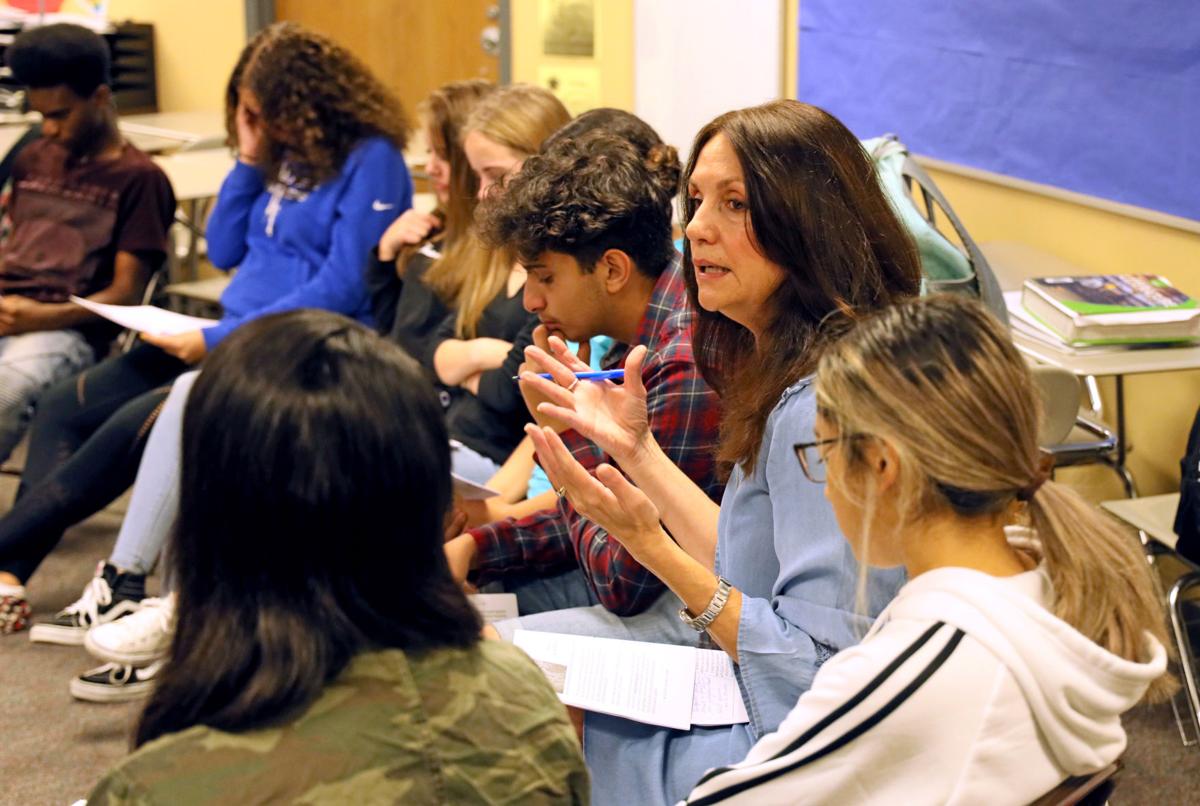 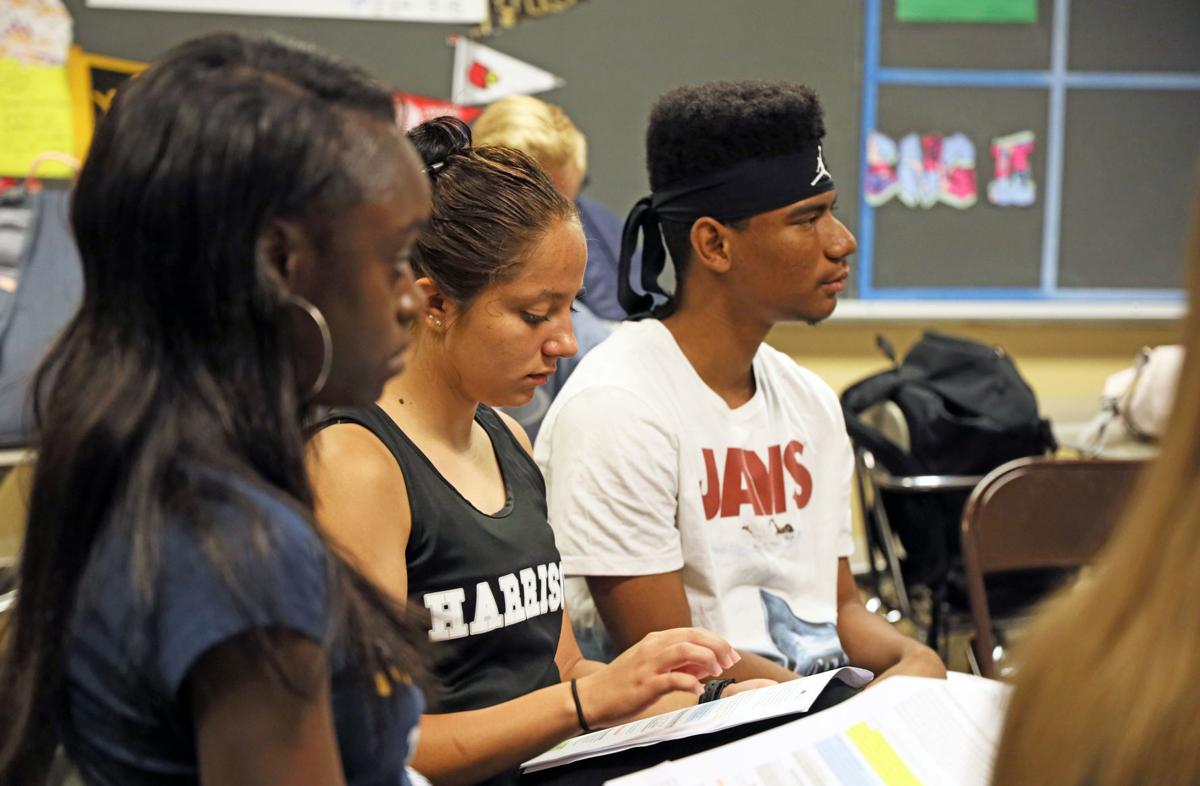 Harrison High School students recently took a training to become Restorative Justice mentors, to help their peers who have been involved in conflicts or other altercations at school.

Harrison High School students recently took a training to become Restorative Justice mentors, to help their peers who have been involved in conflicts or other altercations at school.

A high school freshman who’d had a conflict with another student in a classroom warily approached a circle of five adults and students.

After the fight, the teen was sent to the office, but the principal thought instead of suspension or expulsion, perhaps another means of resolution would work better.

The boy’s behavior was causing angst among his teachers because he was a good student.

“This is a restorative justice conference,” one student replied.

The boy bolted for the door.

A senior stood up, went to the door and said, “Come back, we’re here to help you.”

Slouching, with arms crossed, the offender sat down.

“You look like an athlete,” said one of the adults.

The boy cracked a slight smile.

“What sports?” the adult asked.

The adult told the boy he’s a former soccer coach.

“I wouldn’t have you on my team, though, not with that attitude,” the adult said. “You’d poison the team.”

Two seniors in the circle who were on the varsity basketball team agreed.

“Yeah, coach wouldn’t put up with that,” one said.

After a period of silence, Jeanette Holtham, founding president of The Youth Transformation Center in Colorado Springs, told the boy the group convened because of the altercation and asked if he could tell them what happened.

“There was a lot of reluctance,” she said, remembering the incident. “He didn’t want to talk.”

Holtham tried a different tactic, asking how everything was going at home. The boy lived with an uncle.

The boy gave short, cryptic answers to questions like, “Do you feel safe?” and “Is there anything you need help with?”

Suddenly, the teen started to cry large tears and said, “Six months ago, I had to watch my mother and my siblings get murdered. The bullet missed my head by an inch, and my brother disappeared, and I couldn’t find him.”

Trauma with a capital T.

“Have you ever had this conversation with anyone?” Holtham asked.

“Do you need some help with that?” Holtham said.

Holtham worked to connect the student with mental health services.

The basketball players told the boy they’d talk to the coach about getting him on the school’s JV team.

One said, “We’ll be the brother you’re missing right now.”

A few weeks later, Holtham was walking in the hallways of the school, and the same boy turned around and flashed her a peace sign.

“Everything was going good for him; I was so happy,” she said.

“He was bottling all this up, and if we hadn’t have had that restorative justice circle, where would he be?”

This real-life example of the confidential restorative justice method Holtham has run for 16 years for juveniles is not unusual. Students often act out in school because of problems they haven’t shared or reached out to find assistance.

“The bottom line is we want to keep these kids in school,” Holtham said.

When students get suspended or expelled, they fall behind in school work and get labeled as “bad,” she said.

“That sends them closer to the road we do not want them to take — the juvenile justice system.”

Many students do not have the guidance, inspiration and motivation from their families to help them overcome their challenges, and that’s where restorative justice steps in.

Offending students work with trained adults and peers to understand the harm their behavior caused and make good on it. The program worked with 18 youth offenders last school year.

“It means a great deal to them when you sit and talk it out in a circle and give kids the skills to communicate in a way that’s respectful,” Holtham said.

A Transforming Safety grant of $144,000 annually for the past two years has enabled Holtham’s nonprofit center to expand and add three more schools this year, for 13 schools in Harrison School District 2.

Training on the restorative justice process, along with coaching and mentoring schools on the methodology are provided.

The Youth Transformation Center is one of numerous grantees for the legislatively driven program to revitalize Colorado Springs’ southeast corridor, where poverty and crime are higher than in other parts of town.

In previous years, the center has trained staff in other Pikes Peak region school districts.

But, “This is the first time in 16 years we’ve been able to do a more whole district approach,” Holtham said, “and that makes a huge difference.”

About 80% of cases that qualify for restorative justice practices involve interpersonal conflicts between students involving gossip, name-calling, bullying or romantic relationships, or anger at a teacher, for example.

The infractions generally are “smaller things we can work through versus having a big consequence,” said Harrison School District 2 Superintendent Wendy Birhanzel, one of two superintendents leading the district.

“We wanted to expand because we wanted to use discipline as a teachable moment,” she said. “If you expel or suspend kids and behavior doesn’t change, the system is broken.”

Students need to learn how to get along with each other and others who might not have the same views or opinions, Birhanzel said.

The first is being used in eight D-2 elementary schools, where students learn listening skills, self-expression, kindness and respect for others. Nearly 445 classroom connection circles were held last school year.

“The circle format gives them a voice and confidence to talk about their feelings, thoughts and beliefs,” Holtham said. “We use these a lot for classroom management.”

The underlying concept: “The better I know you, the less likely you are to hurt me.”

Birhanzel said schools have seen relationships improve among students as well as staff.

Nineteen students at Harrison High School recently were trained as mentors for their peers in the restorative justice program, to help them problem-solve and move beyond their misbehavior.

Students take responsibility for their actions and making amends.

“So kids learn from their mistakes instead of being punished for everything,” Birhanzel said. “We’re starting to see the change.”

Anecdotal feedback shows the idea works, and Holtham said she expects suspensions and expulsions in Harrison D-2 to decline.

“Failure is not an option with this grant,” Holtham said. “This is going to transform southeast Colorado Springs. People are now recognizing we can’t keep kicking kids out of school. We need this human capital. We need to prepare them for the workforce and life in general.”