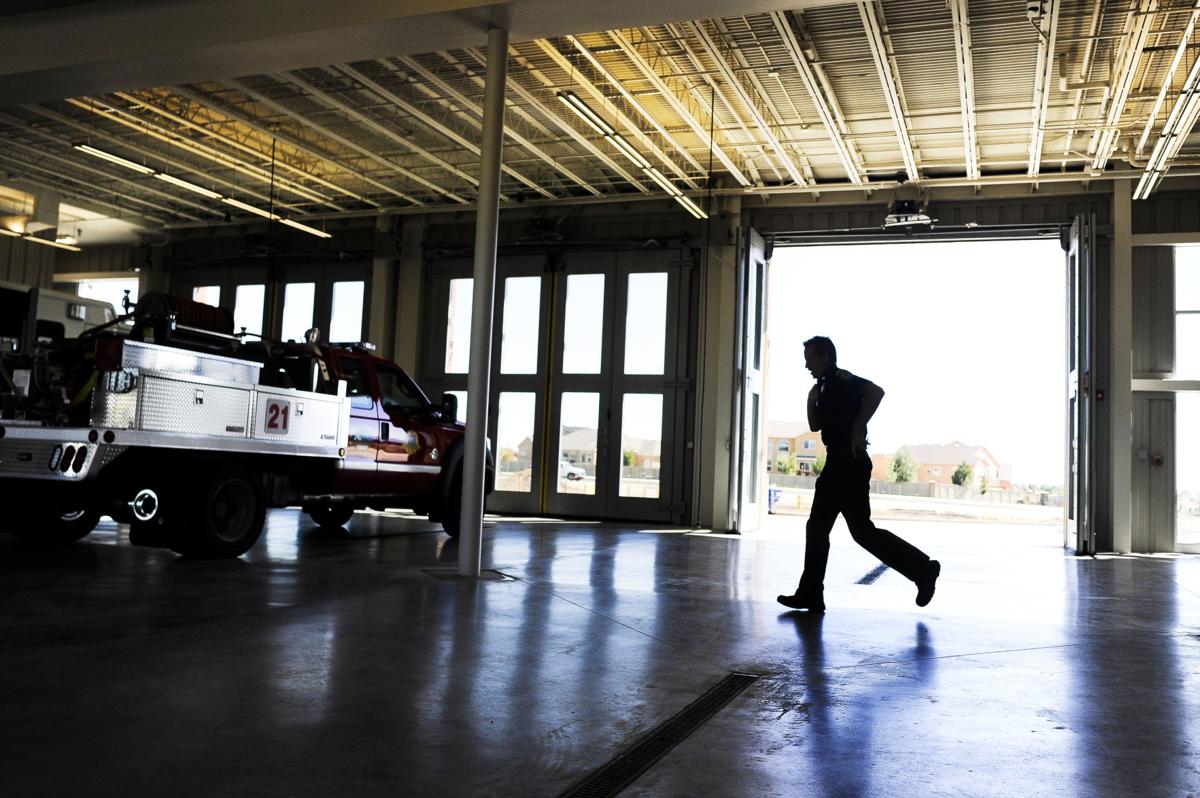 Lt. Brian Keys runs to his engine at Fire Station 21 after being called out to a traffic accident in 2013. The construction of the fire station near Powers and Dublin Boulevards made it unnecessary for residents in Cumbre Vista I and II and other nearby neighborhoods to continue paying property taxes to Black Forest Fire Protection/Rescue Protection District. Photo by Michael Ciaglo, The Gazette 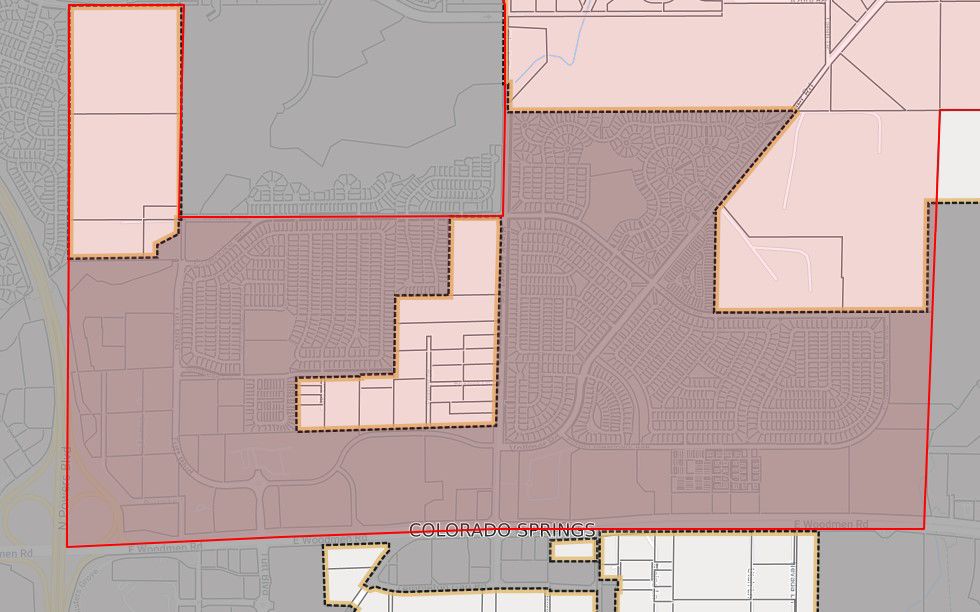 The dark pink area shows homes near Woodmen Road and Powers Boulevard that are in Colorado Springs city limits and within the Black Forest Fire/Rescue Protection District.

Hundreds of northeast Colorado Springs residents have been paying twice for fire protection for years.

However, many residents likely don’t realize they are paying hundreds of dollars extra each year in property taxes for fire protection because of the way the bills are written, said resident Colleen Murphy, who is advocating for change. The tax bills that residents receive list Black Forest Fire/Rescue Protection District and the city of Colorado Springs separately, but it’s likely unclear to many residents that fire protection is included in the city services, she said.

Residents living northeast of East Woodmen Road and North Powers Boulevard in developments including Cumbre Vista I and II, Forest Meadows, Lodges at Black Forest and the Woodmen Vistas neighborhood, are among those paying about $300 to $400 annually to Black Forest Fire District in addition to city taxes, she said. El Paso County assessor’s maps confirmed the neighborhoods are in the city and in the fire protection district.

Murphy has raised the issue with the Colorado Springs City Council and the Black Forest Fire District and both have told her they have been trying to solve the problem for years.

City residents are receiving property tax bills from the Black Forest Fire District because when the homes were built the city didn’t have a fire station to serve the new homes, according to the homeowners association for Cumbre Vista I and II. The association had been urging fire and city officials to address the issue but they haven't succeeded, according to an email sent to association members.

In 2013, the city built a fire station near Powers and Dublin Boulevards, making the property taxes charged by Black Forest duplicative, the email said.

“There is absolutely no reason that this continues to exist the way it does,” said Dave Mersman, a member of the HOA board and the chief financial officer for Keller Homes, a developer in the process of turning the HOA board over to residents.

Black Forest Fire Chief PJ Langmaid said the Fire District's board passed a resolution two years ago stating its intent to exclude residences within the city, but the city has failed to bring the issue before a district court.

"I just think the City Attorney’s Office is so overworked and understaffed they have not been able to get it finished," he said.

In the meantime, Black Forest Fire District staff continue to respond to emergencies in the area that is also paying for city fire protection, he said. The situation is not totally unique as other rural fire districts near Colorado Springs have also had to provide fire protection within city limits as subdivisions have grown faster than fire protection services, he said.

The city does not expect a change to the Black Forest district boundaries soon because lawyers for both sides still need to finish agreements, Sam Friedman, City Council constituent response specialist, told residents in an email. The property owners in the city also cannot be excluded from the fire district until it finishes paying back a bond. The properties must contribute to the bond repayment until it's paid off because they were part of the district when the bond was issued, he said.

“Be aware, it is our understanding that the properties impacted by this exclusion process may not see tax relief until January 2023,” he wrote.

However, Langmaid said the properties could be excluded from most of the taxes owed to Black Forest and just pay tax on the bond, which would be a much cheaper bill for property owners. The bond is expected to be paid off in 2021, he said.

Councilman Andy Pico told Murphy he would request an update on the issue during a board meeting in July. But he informed her that he didn’t expect much progress.

“The city has been trying to get this done since 2016. This will still take awhile,” he said in an email to Murphy.

The City Attorney's Office has not been able to get answers from the Black Forest Fire District's attorney and that's been part of the delay, Pico said.

The city does not track how many property owners are paying the city and the Black Forest Fire District for fire protection, said Jamie Fabos city spokeswoman. She also said the issue was not one of double taxation.

Fabos also said it was up to property owners to apply for exclusion from the fire district.

Murphy said she asked Langmaid to exclude her property from the district and he told her that the process between the city and the county was moving forward and she should get in touch with her city Council representative.

Another resident paying twice for fire protection, Kerri Pritchard, raised the issue two years ago and was told by city and fire officials the problem was convoluted and would take time to sort out.

“Nobody wants to give any answers,” she said.

Pritchard is particularly concerned about paying for fire protection twice because residents in the area already pay some of the highest property taxes in town in part because of Woodmen Heights Metropolitan District and the Woodmen Road Metropolitan District, she said. When she moved from the Briargate area, her annually property taxes went up from about $1,600 annually to about $4,600, she said.

Two local fire protection districts say taxpayers need to pony up so the agencies can keep their stations running smoothly and emergency services up to par. But the Tri-Lakes Monument and Donald Wescott fire protection districts have starkly different reasons for the request: one is serving a growing population as developments spring up in the northern part of El Paso County; the other is working with a shrinking tax base because the Colorado Springs Fire Department now serves much of the district. Fire protection districts are primarily funded through property taxes they levy. Unlike fire departments, such as those in Fountain or Colorado Springs, the districts are independent from municipal government entities.