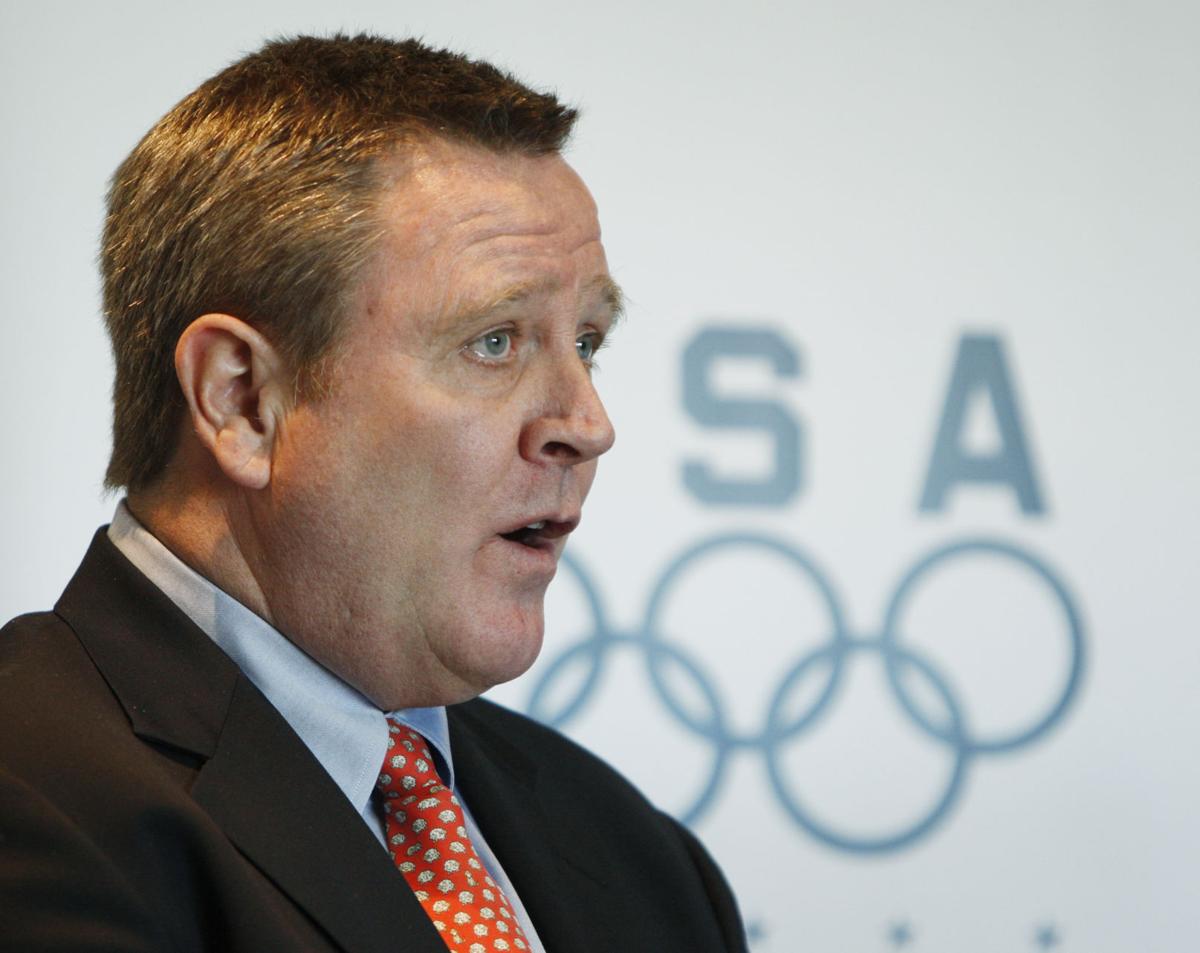 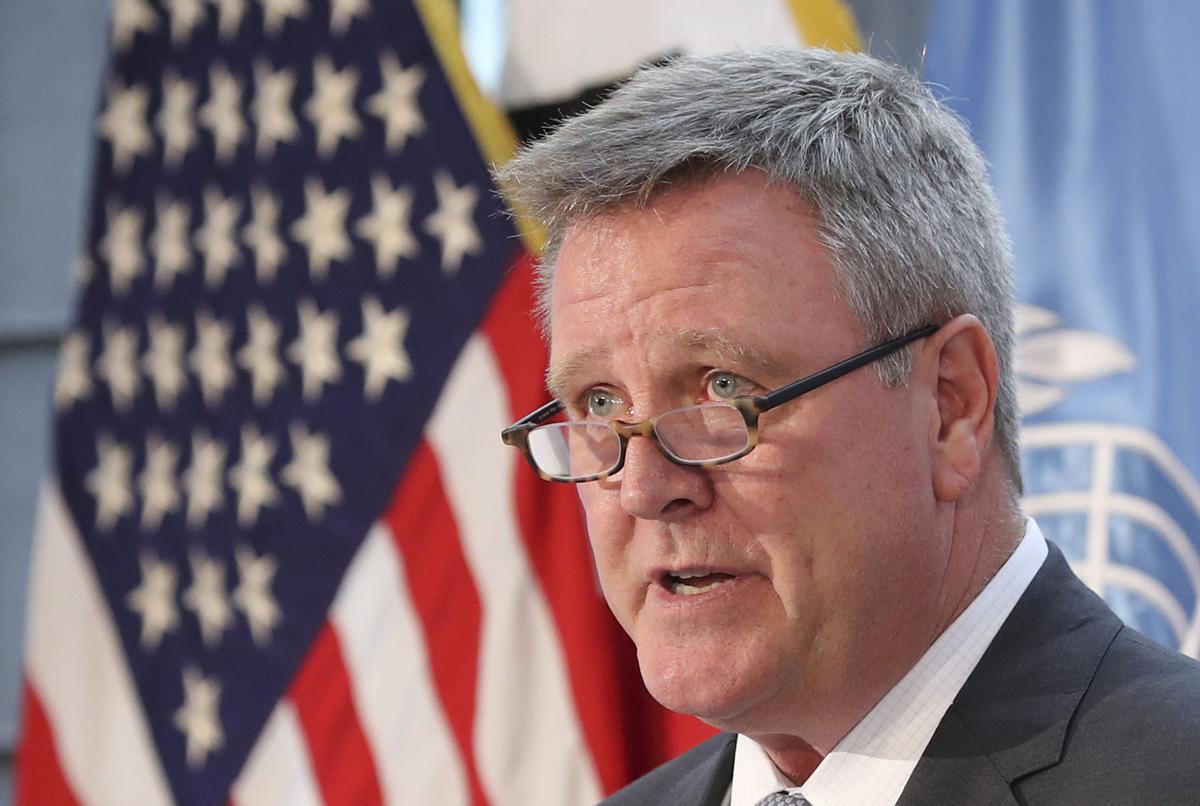 Scott Blackmun, then-CEO of the U.S. Olympic Committee, speaks in August 2017 at Yongsan Garrison, a U.S. military base in Seoul, South Korea. 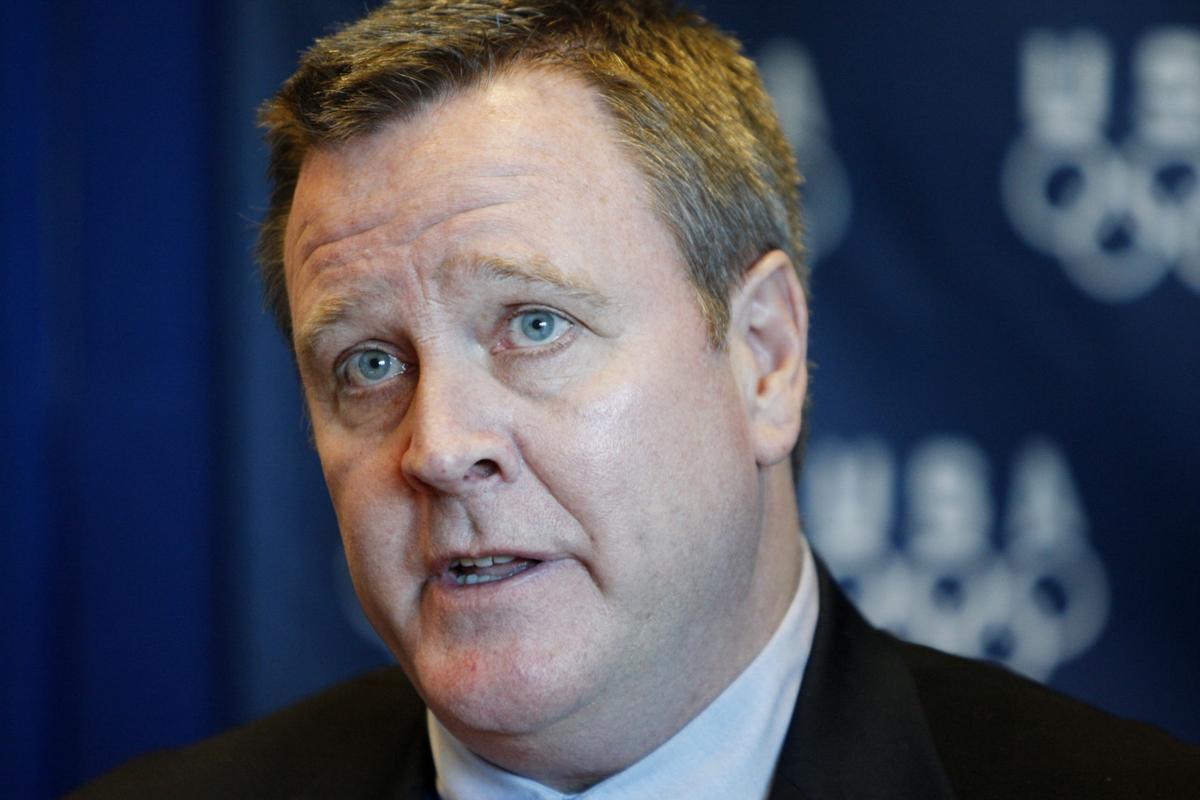 Scott Blackmun responds to questions at a news conference at the United States Olympic Training Center where he was named CEO of the U.S. Olympic Committee on Wednesday, Jan. 6, 2010, in Colorado Springs, Colo. (AP Photo/ Ed Andrieski )

Scott Blackmun, then-CEO of the U.S. Olympic Committee, speaks in August 2017 at Yongsan Garrison, a U.S. military base in Seoul, South Korea.

Scott Blackmun responds to questions at a news conference at the United States Olympic Training Center where he was named CEO of the U.S. Olympic Committee on Wednesday, Jan. 6, 2010, in Colorado Springs, Colo. (AP Photo/ Ed Andrieski )

Top leaders at the U.S. Olympic Committee in Colorado Springs were complicit in a yearlong “concealment” of abuse allegations that led to the sexual assault of dozens of gymnasts, says a scathing internal review released Monday.

Olympic Committee CEO Scott Blackmun and his top deputy for athlete performance were told of the perverted practices of USA Gymnastics team Dr. Larry Nassar more than a year before his attacks on athletes became public, but they didn’t prevent him from further attacks.

“Inaction and concealment had consequences: dozens of girls and young women were abused during the yearlong period between the summer of 2015 and September 2016,” the report found.

The report claims Blackmun deleted email traffic that referenced Nassar and did not tell the Olympic Committee’s board of directors about the allegations. They found out about the scandal in a newspaper report.

The report, commissioned by the USOC, found it was among several oversight bodies that “facilitated” thousands of sexual assaults by Nassar on hundreds of victims. 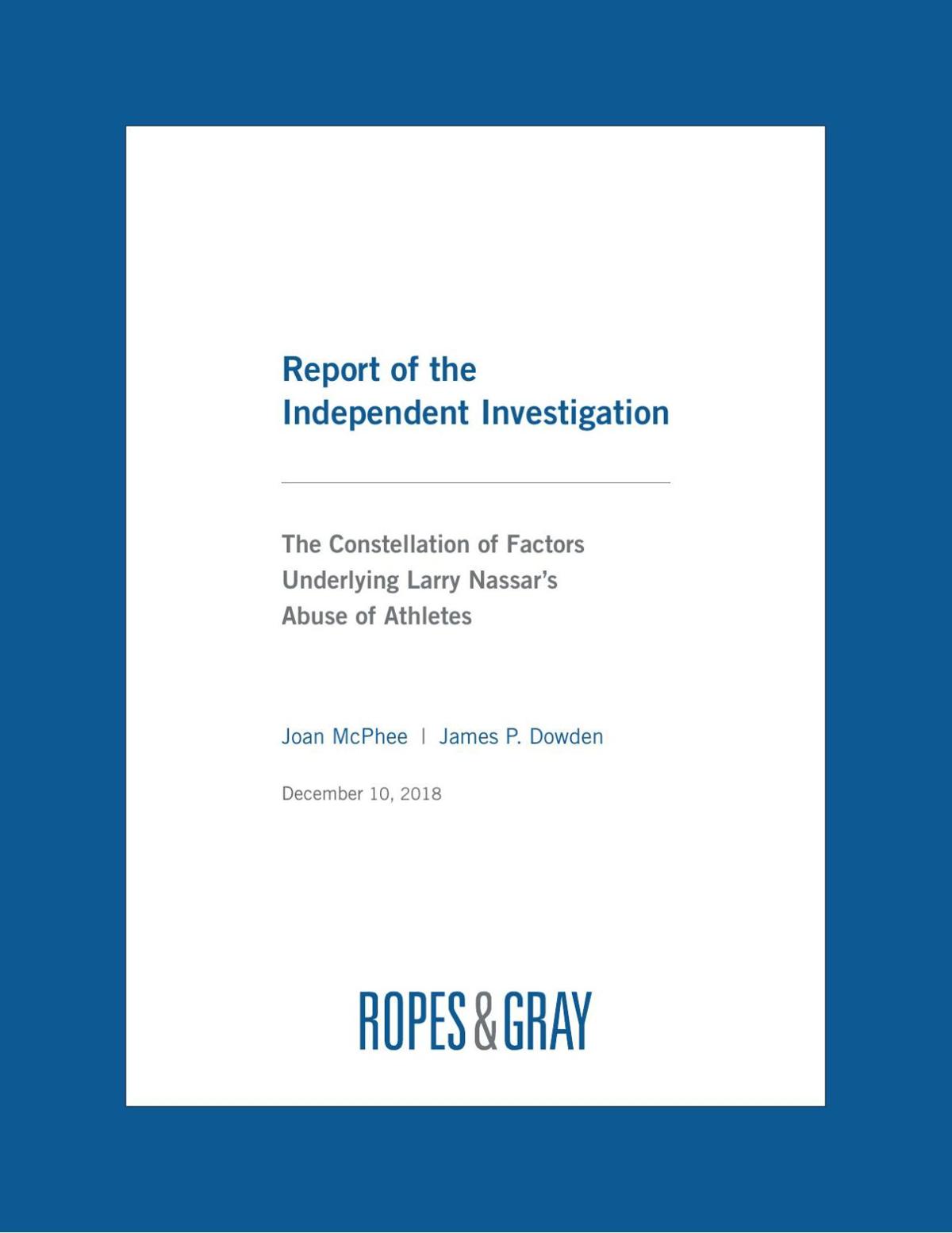 The long-anticipated report says leaders failed to protect athletes and failed to heed athletes’ calls for help while ignoring red flags that should have led them to take action.

Although Blackmun at first told investigators that, within weeks of learning of the athlete concerns about Nassar, he had initiated an internal review of the allegations to make sure the USOC was doing “the right thing,” investigators found no documentary evidence showing such steps were taken and no one who could recall such a review.

David Ramsey: US Olympic Committee CEO Scott Blackmun's failure to expose Larry Nassar will be part of his legacy

The report concludes that “no such conversations were had and no such steps were taken.”

“Numerous institutions and individuals enabled his (Nassar’s) abuse and failed to stop him, including coaches at the club and elite level, trainers and medical professionals, administrators and coaches at Michigan State University and officials at both United States of America Gymnastics and the United States Olympic Committee,” the report said.

The report had one immediate impact: USOC fired its deputy for athlete performance, Alan Ashley, on Monday after it was revealed that he, along with Blackmun, knew about the Nassar case but failed to act.

Nassar was sentenced in January to up to 175 years behind bars for what was described as a prolific pattern of sexual assaults on athletes. But investigators say much more than a perverted doctor allowed so many attacks to take place.

“What happened cannot be explained by Nassar, whose conduct, however reprehensible, was a manifestation of a far broader constellation of factors and conditions in elite gymnastics and Olympic sport that left young athletes vulnerable to abuse and led Olympic organizations astray from the priority of athlete safety,” the report said.

Critics of the Olympic Committee hailed the report as a step toward transparency.

“I’m very heartened at the report, because it isn’t a whitewash job at all and actually connects the dots for everybody about the priorities of the Olympic Committee that have kind of gone off the rails,” said August Wolf, a track and field athlete who competed in the 1984 Olympics and this year founded Olympians Rising, a nonprofit that advocates for athletes’ rights and reform at every level of the USOC. “Hopefully, the USOC is going to take heart in this, take a real hard look at their priorities and process and adjust things that we’ve been saying all along need to be adjusted quite aggressively.”

David Ramsey: US Olympic Committee CEO Scott Blackmun's failure to expose Larry Nassar will be part of his legacy

The report came as no surprise at USOC headquarters, which has undergone unprecedented turmoil this year with the departure of Blackmun and a shake-up of its board of directors as the nation’s Olympic sports have been roiled by sexual assault scandals that have spread far beyond gymnastics.

“This year, the USOC has already taken important actions to strengthen athlete safeguards and help the USOC be more effective in our mission to empower and support athletes,” new CEO Sarah Hirshland said in a statement.

“Sexual abuse, harassment and discrimination have no place in the U.S. Olympic and Paralympic community, and it’s on all of us — member organizations, institutions and individuals alike — to foster a healthy culture for competitive excellence. We will use the findings … to do everything possible to prevent something similar from happening in the future.”

The USOC board is set to meet Friday in San Francisco, where the Nassar report will top the agenda.

The report claims Blackmun knew of the sexual abuse allegations within gymnastics in 2015 but did nothing more until the doctor’s actions were made public by an Indiana newspaper a year later.

During that time, Nassar still had free reign over Olympic facilities, and no steps were taken to prevent him from finding more victims, the investigation found.

“According to witness interviews, USOC board members remained unaware of the allegations and the potential ongoing threat to athletes until the Indianapolis Star published its account of Nassar’s abuse in September 2016,” the report said.

While Blackmun was told that the Nassar case was reported to the FBI and they were investigating, investigators found he did not follow up with federal agents or other law enforcement.

“Nor did Mr. Blackmun initiate any internal review or other assessment to gather facts regarding Nassar, the athlete concerns, the scope of the alleged misconduct or Nassar’s ability to gain access to athletes at USOC-owned and operated facilities, such as the U.S. Olympic Training Center in Colorado Springs, Colorado,” the report said.

The report was issued by a law firm hired by the USOC to conduct the investigation.

“Investigators from the global law firm Ropes & Gray LLP, led by partners Joan McPhee and James P. Dowden, had complete control over the investigation, the questions asked, the documents reviewed, and the findings made,” the law firm said in a statement.

The investigators concluded that the Olympic Committee leaders were focused more on making money and winning medals than properly supervising the governing bodies it oversees. The USOC controls the charters of more than four dozen Olympic sports, giving it broad power to discipline misconduct. But those powers were not brought to bear, the report found.

“As the USOC was adapting its governance model and increasing its focus on generating revenue and medals, the USOC was also adopting a service-oriented approach toward the NGBs that involved providing resources without accompanying oversight,” the report found.

The Olympic Committee said Monday that the findings of the report will lead to changes.

“The USOC will share information about additional actions it is taking as a result of these findings,” the USOC said in an email.

The report also will spur action in Congress, where lawmakers have spent much of the past year studying sexual assault in Olympic sport.

The USOC gets its authority from federal law. The Ted Stevens Sports Act puts the Colorado Springs committee in charge of picking teams and ruling over governing bodies.

The USOC used that authority last month in a move to pull the charter from USA Gymnastics.

The gymnastics organization has pledged to fight the removal of its charter, which would remove its status in Olympic sports.

Gymnastics, which filed for Chapter 11 bankruptcy this month, issued a statement praising the report.

“We are indebted to the brave women who came forward and have made our sport safer by speaking out against the horrific acts of Larry Nassar,” the statement said.

“USA Gymnastics is one of the organizations that let them down, and we are working to regain their trust and that of the entire gymnastics community.”

Congress has made some changes, including a provision that requires the USOC and its governing bodies to report allegations of sexual assault to police.

Congress also is pushing to allocate more money to the USOC’s U.S. Center for Safe Sport, a Denver-based nonprofit charged with investigating alleged sexual assaults, maintaining a roster of those banned from sports for sexual abuse and educating athletes and coaches.

The USOC also awaits a review of its governance and its relationship with the 50 sports governing bodies it sanctions. That won’t be ready until 2019.

Still, Susanne Lyons, who will take over as USOC board chairwoman next month, said the review is an important step.

“The USOC board commissioned this independent investigation because we knew we had an obligation to find out how this happened and to take important steps to prevent and detect abuse. We now have a much more comprehensive view of individual and institutional failures,” Lyons said in a statement. “Everyone in the Olympic and Paralympic community, including the USOC, must learn from the report and take appropriate actions to strengthen protections for athletes. We recognize that we must do more, and we will do more.”

USA Gymnastics filed a Chapter 11 bankruptcy petition on Wednesday as it attempts to reach settlements in the dozens of sex-abuse lawsuits it faces and to forestall its potential demise at the hands of the U.S. Olympic Committee.