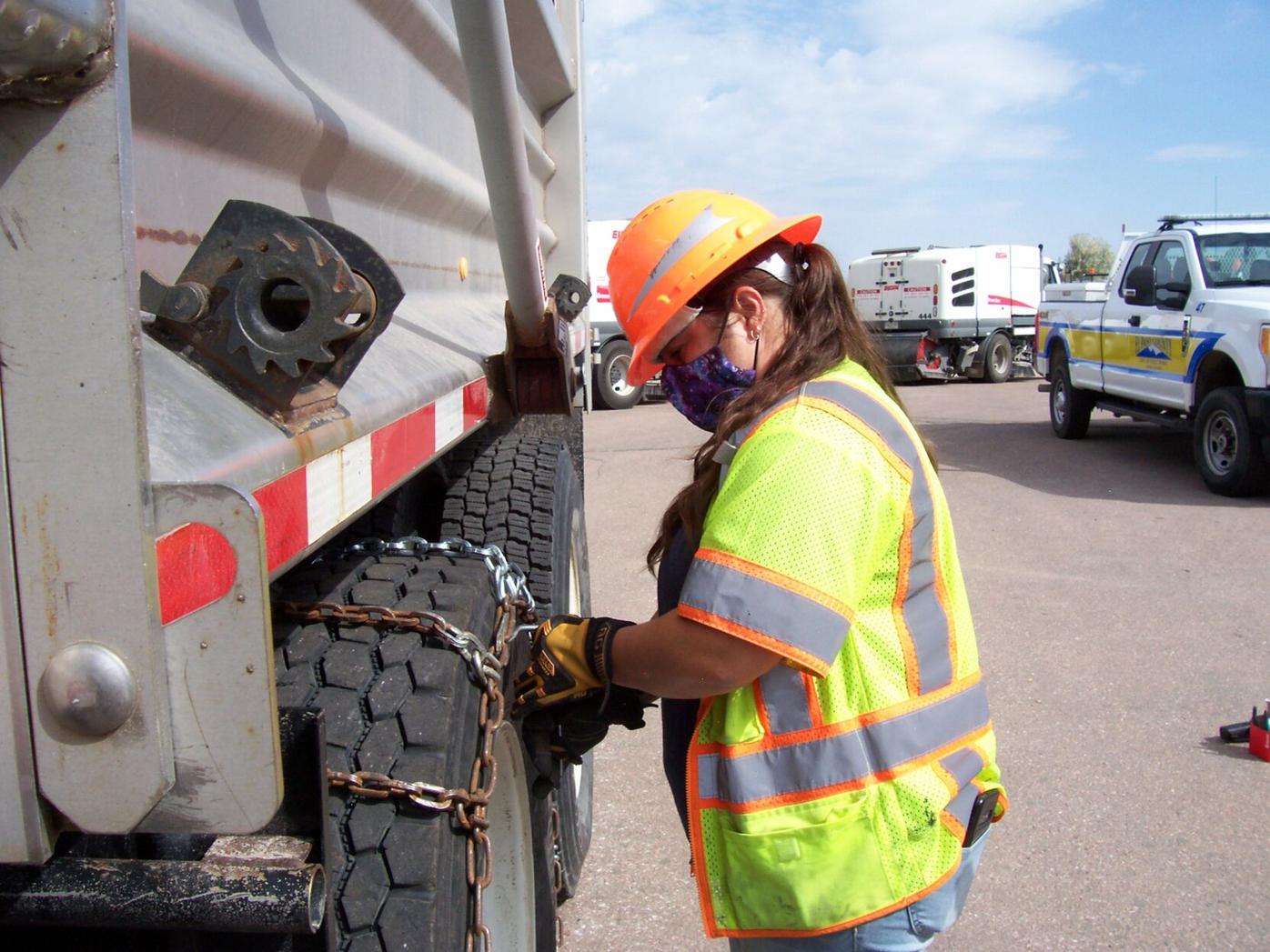 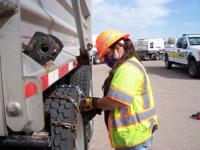 Maintenance worker Erin Vera practices putting chains on one of the large snow removal trucks. Vera is one of a dozen women who operate these vehicles. The El Paso County Department of Public Works has been busy training workers and preparing equipment for the winter months ahead. 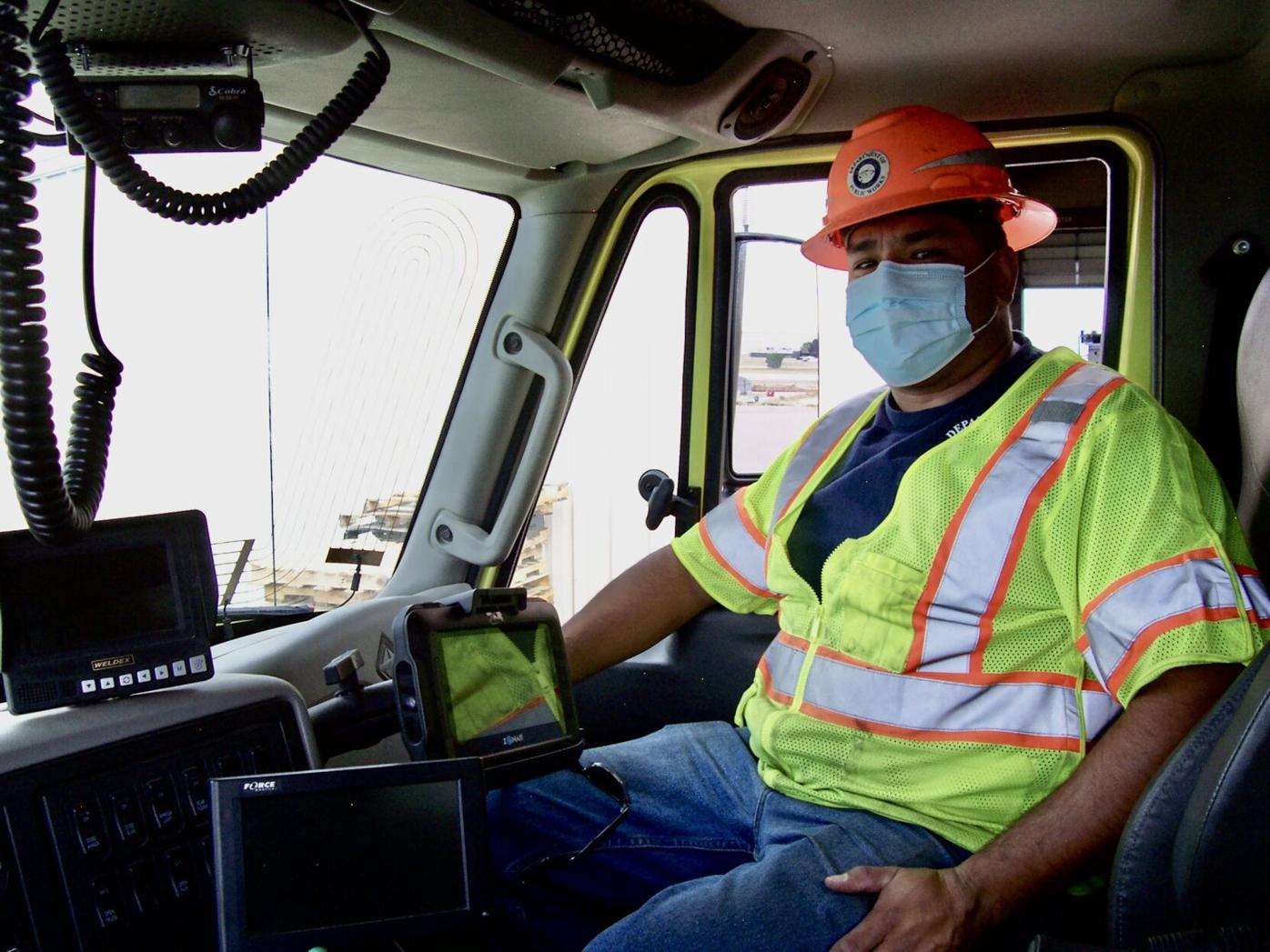 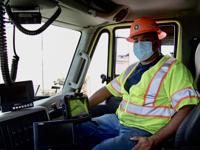 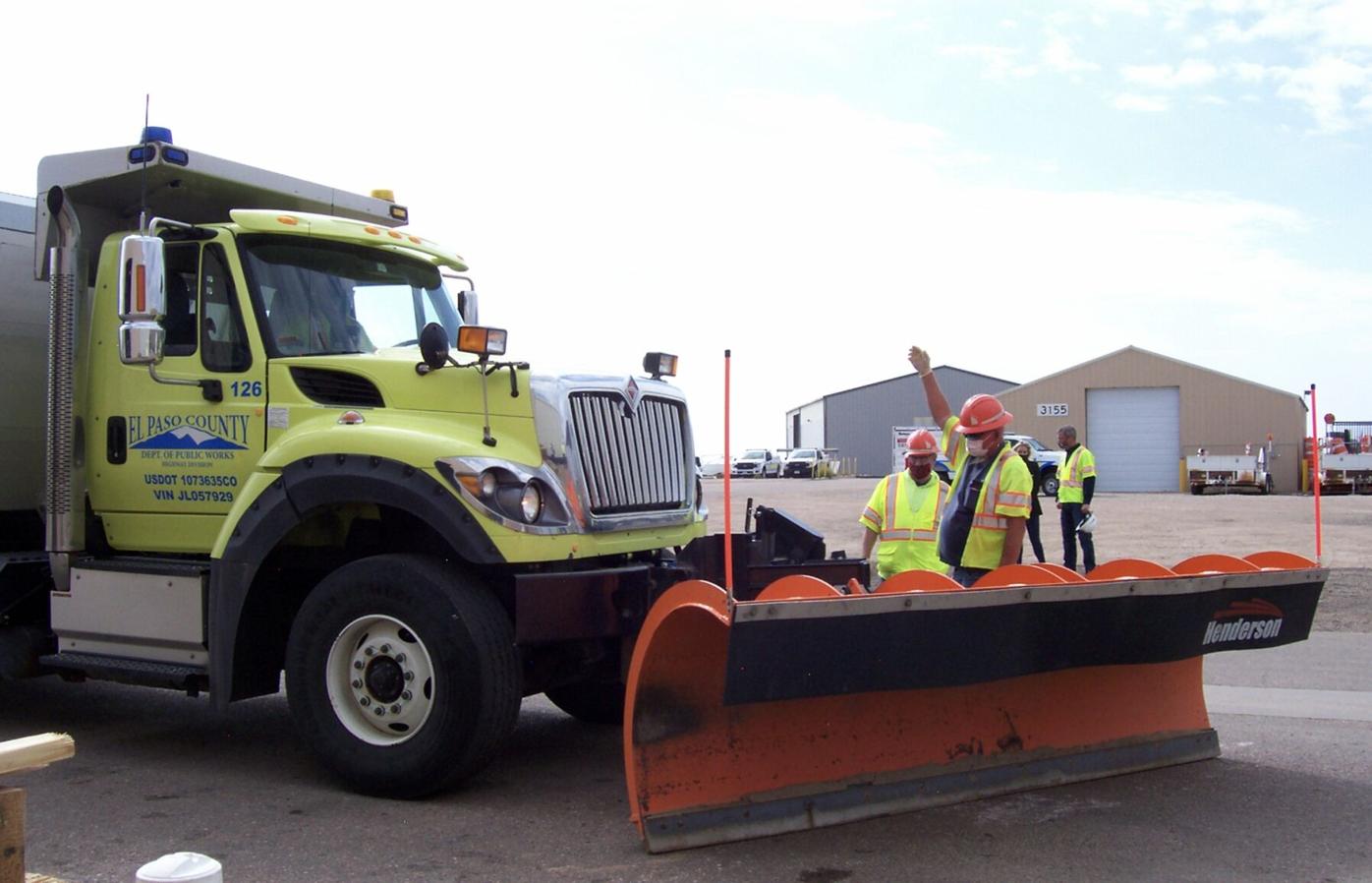 Maintenance workers are trained on installing a plow attachment to snow removal trucks. 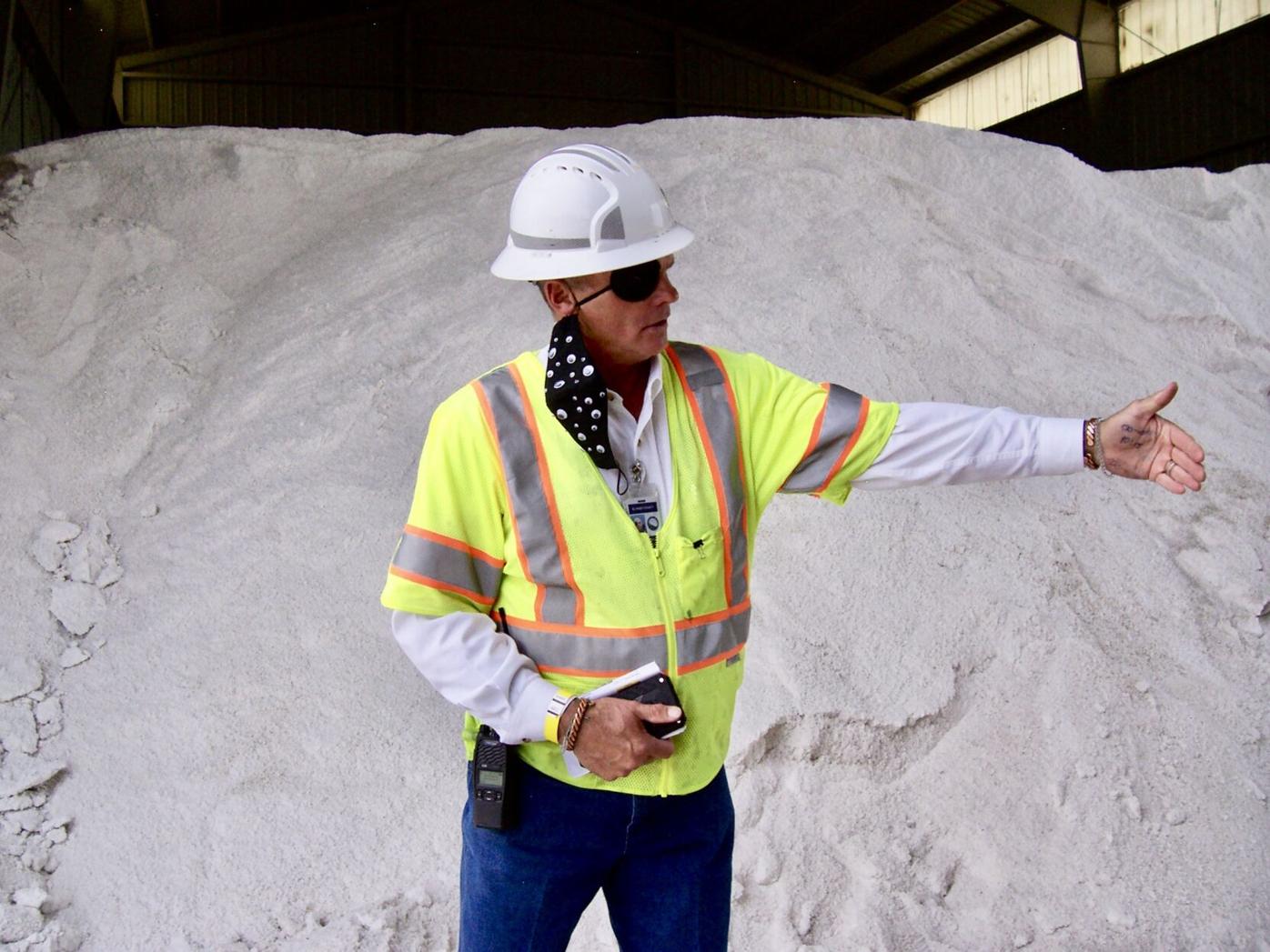 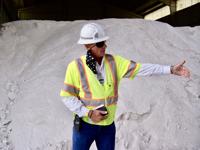 Training Manager Scotty Hall stands in front of a 3,000-ton stockpile of salt.

Maintenance worker Erin Vera practices putting chains on one of the large snow removal trucks. Vera is one of a dozen women who operate these vehicles. The El Paso County Department of Public Works has been busy training workers and preparing equipment for the winter months ahead.

Maintenance workers are trained on installing a plow attachment to snow removal trucks.

Training Manager Scotty Hall stands in front of a 3,000-ton stockpile of salt.

The inevitable snow season is coming to El Paso County.

Well, we’ve already gotten a sneak peek. In September, Colorado Springs already had a taste of what is looming on the horizon, and citizens were reminded of what it takes to weather a snowstorm.

The El Paso County Department of Public Works last week hosted a media event to facilitate an inside look at just what is involved with training staff and preparing equipment for the winter months ahead. Over 2,200 miles of paved and gravel roads located in El Paso County neighborhoods outside the city limits and excluding CDOT highways are covered by Public Works. This is an area larger than the state of Rhode Island.

Around 120 county maintenance workers have just completed two weeks of snow training. In past years this training only took one week, but due to COVID-19 precaustions, training groups this year were smaller, necessitating a longer overall period of training.

Scotty Hall, training manager for Public Works, says the county is …“stocked and ready to go. The No. 1 thing is safety for not only our citizens, but also for snow plow operators … Drivers put their lives on the line!”

There are currently 3,000 tons of rock salt and sand are stockpiled, waiting for the next storm. A brine mixture comprised of salt and water is the first line of defense to getting ahead of an oncoming storm. As storms roll in, this brine (using as little salt as possible) is sprayed on asphalt roads melting snow and providing a Teflon-like barrier between the pavement and oncoming moisture. As conditions change and likely worsen, a sand mixture is spread as roads are being plowed.

Forecasts are constantly changing, so the drivers of around 34 county trucks stay in constant touch with the snow foreman. Trucks are typically pre-positioned as storms bear down, leading to increased efficiency and a timely response. Their focus is primarily on treating hills, bridges, curves, and areas by stop signs.

There is minimal guessing in this digitized era, explains maintenance worker, Michael Hernandez. Controls within the truck cab include small computer screens, easy-to-manipulate joy sticks, and a back-up camera to track use of the plow and the amounts of brine and sand mixtures used. A Zonar checklist digitally documents all precautions taken prior to heading out into a storm.

Hernandez notes that most drivers treat snow-removal vehicles as they would an emergency vehicle, giving them room to work. He asks that citizens give trucks a wide berth due to blind spots and difficulty making fast stops. “Just let us know you are there,” he suggests.

County workers have a list of suggestions for drivers as winter approaches:

2. Keep an emergency kit in your vehicle including a phone charger, food and blankets.

3. Stay clear of snow removal crews, and do not pass.

4. Remember that private citizens are responsible for keeping their driveway and sidewalk free of snow.

5. Be aware of road conditions before going out, and stay home if possible.

6. Having a 4-wheel-drive vehicle does not ensure it is safe to drive the speed limit.

8. Keep chains or cables in your vehicle for use in an emergency.

Hall reminds the public that you can’t shovel snow into the roadway — El Paso County has a statute preventing removal of snow from personal property and depositing it into a public right of way. Courtesy and common sense is mandated to ensure that sidewalks and streets are as safe as possible during and after snowstorms.

The county’s maintenance workers, including a dozen women, are now trained and ready to protect the public from expected winter ice and snowstorms.

Who doesn’t welcome the sight of a working snow removal vehicle when safety is an issue?