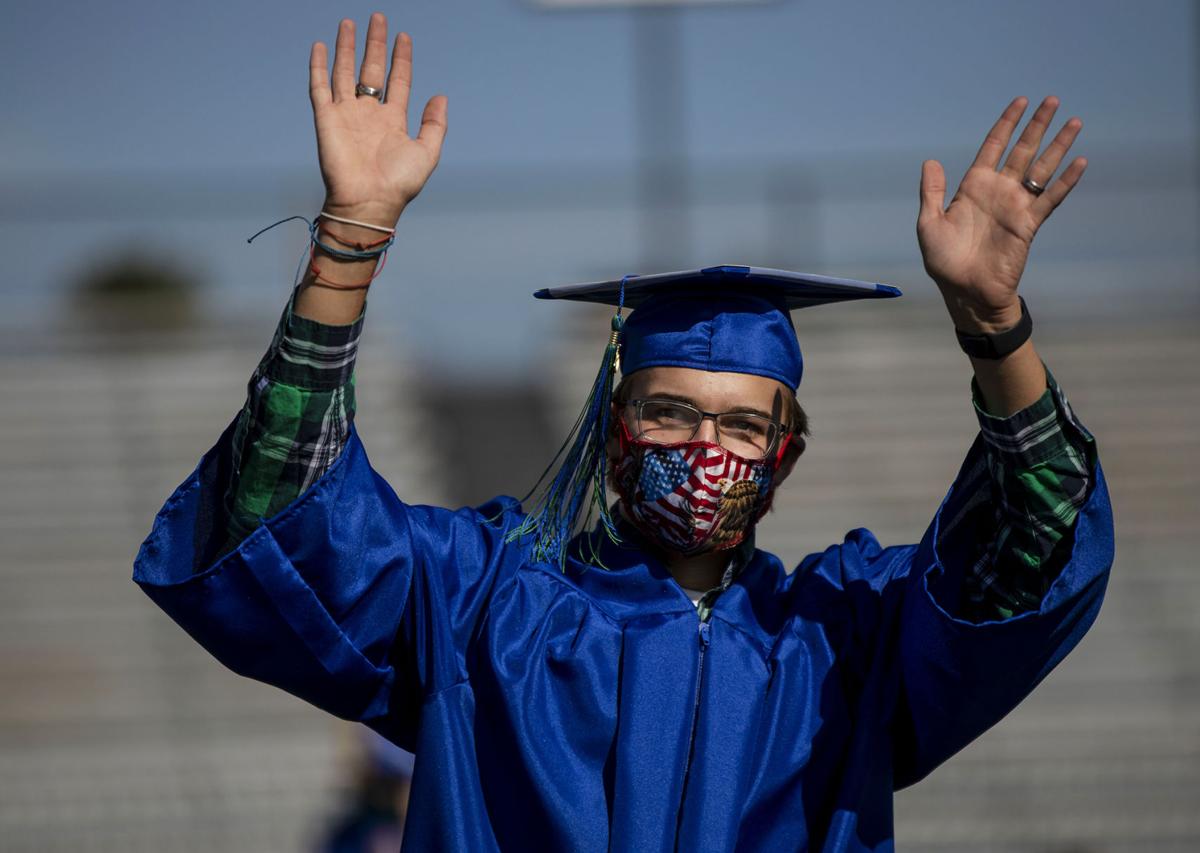 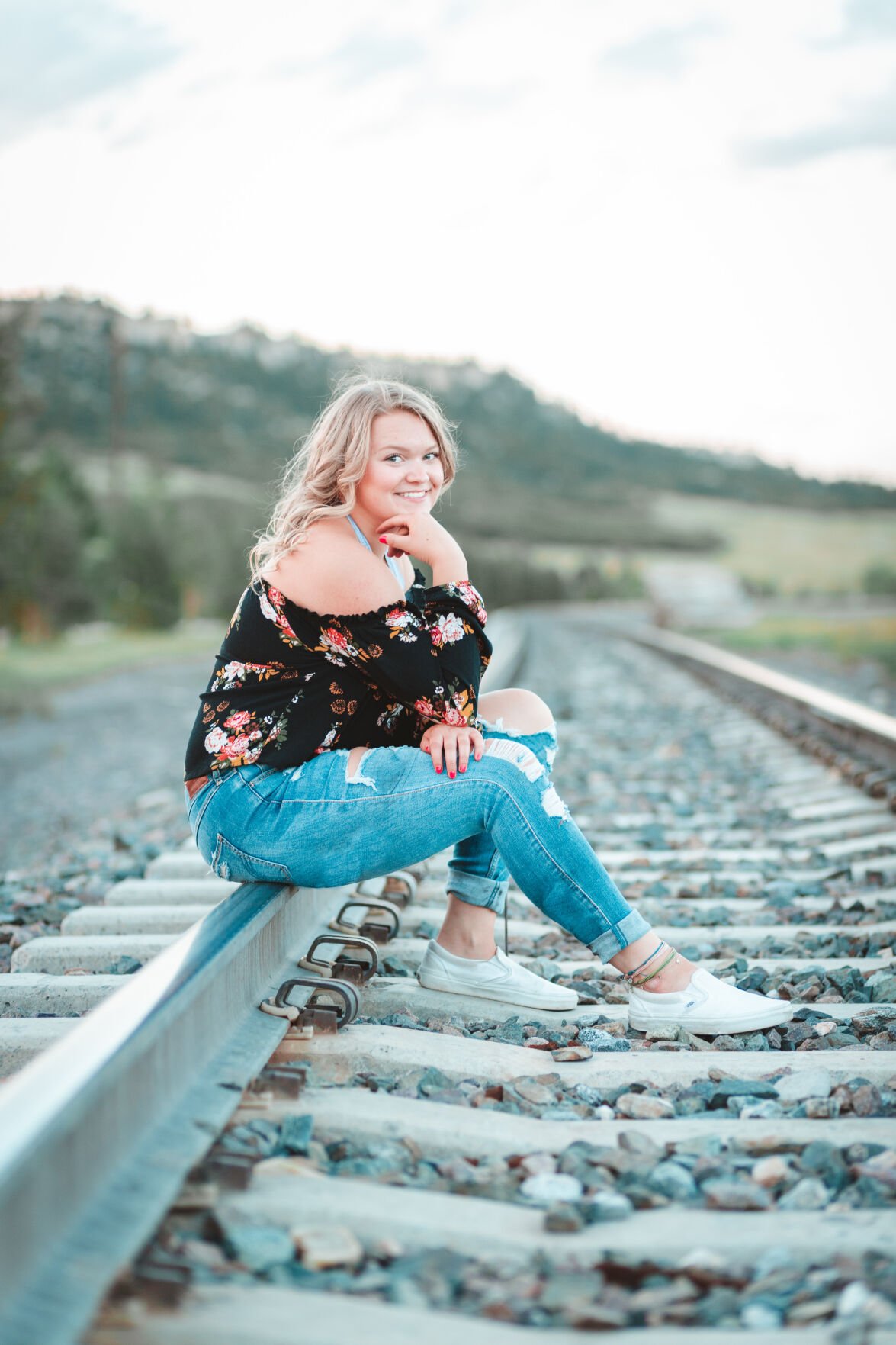 Widefield High School senior Sami Price said she can’t wait to wear the prom dress she bought last year at this year’s prom, which will be outside at the district stadium. (Courtesy photo) 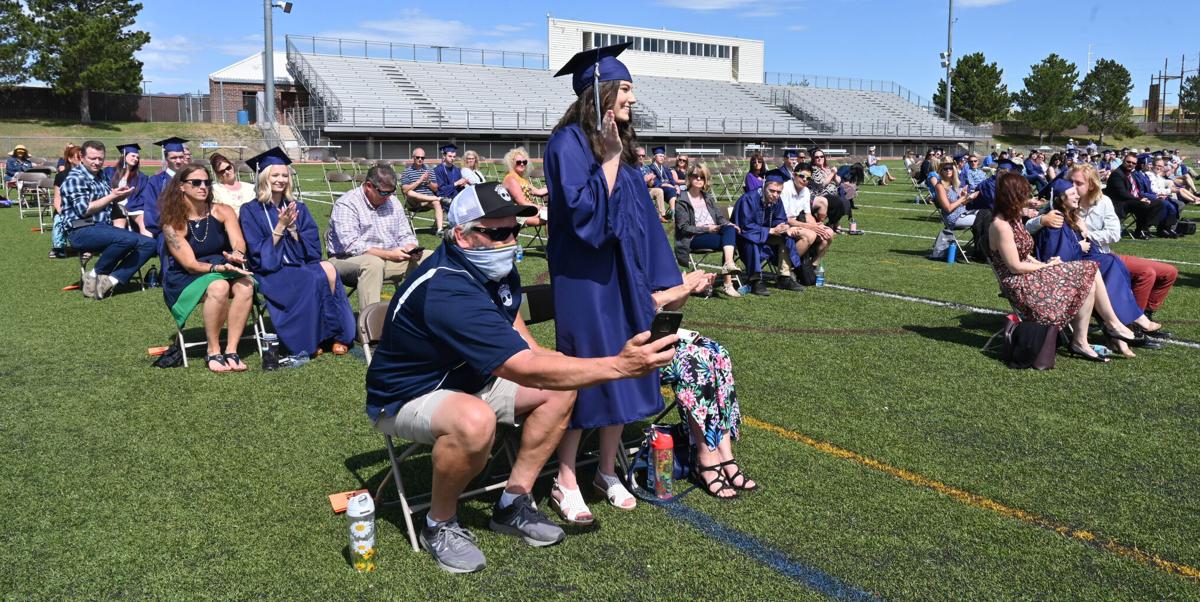 At last year’s graduation for Academy High School at the Academy D-20 stadium, graduates were seated between two family or friends and 6 feet apart from others, in keeping with COVID-19 guidelines. In this file photo from June 28, 2020, Jenna Richards has her name called as her dad, Jeff Richards, leans forward in his seat to capture the moment on his cell phone camera. (Photo by Jerilee Bennett, The Gazette)

At last year’s graduation for Academy High School at the Academy D-20 stadium, graduates were seated between two family or friends and 6 feet apart from others, in keeping with COVID-19 guidelines. In this file photo from June 28, 2020, Jenna Richards has her name called as her dad, Jeff Richards, leans forward in his seat to capture the moment on his cell phone camera. (Photo by Jerilee Bennett, The Gazette)

For the past year, Widefield High School senior Sami Price has stared at the prom dress she's never gotten to wear because COVID-19 forced proms to be canceled last year.

The dress is finally going somewhere.

“The return of prom is shining light on what has been a very dark year, especially for seniors,” Price said. “Although it won’t be the traditional prom that’s often a rite of passage in high school, we still get something in a year where everything has been taken away from us.”

With just a month or so until classes end, high schools are finalizing the revival of traditional activities for seniors amid the ever-changing pandemic.

“We were waiting so we could be sure we’d be successful, and now everybody feels pretty confident,” said Christine O’Brien, spokeswoman for Harrison School District 2 in Colorado Springs.

Last year became even more of a race to provide graduation ceremonies, with the county obtaining a variance in mid-May to allow altered in-person, outdoor celebrations.

Some proms, including for Fountain-Fort Carson School District 8, are being held outside. D-8’s will be at Guy R. Barickman Stadium at Fountain-Fort Carson High School. That will also be the site of the district’s graduation ceremonies on May 29, when masks will be required for graduates and antendees.

“Throughout the pandemic, we’ve taken the approach of, ‘We’ll find a way,’” said D-8 spokeswoman Christy McGee. “We’re saying ‘Yes’ to bringing back the end-of-year milestone events in a safe way.”

About 80% of the district’s employees have been vaccinated, she added.

Last year, for the first time in 23 years, district ceremonies were held at Garry Berry Stadium because of social distancing and capacity restrictions.

But, “Due to some scheduling conflicts and the ability to host more people outdoors, we put the World Arena on hold this year,” Ashby said.

Students from D-11’s four traditional and four non-traditional high schools will graduate outside May 18-21 at the district’s Garry Berry Stadium.

The number of guests per graduate is being decided, Ashby added. Last year, each graduate could invite two people, but officials are hoping to allow more this year.

There won’t be any limits on the number of guests at Harrison and Sierra high schools, D-2's O’Brien said. Both schools will hold ceremonies on May 27 at UCHealth Park Rocky Mountain Vibes Ballpark Stadium on Tutt Boulevard.

Sierra High will continue a new tradition started last year: a drive-through parade and photo session for graduates on May 22 in the school parking lot as well.

Each Fountain-Fort Carson graduate can receive four tickets for guests to attend commencement in the district’s 5,000-capacity stadium, McGee said.

Last year, no audience was allowed. Extra spacing again will be in place for social distancing, she said.

Widefield D-3 also is providing seating for up to four guests per graduate at its graduations, said spokeswoman Samantha Briggs. Guests will need tickets to attend.

Ceremonies for Widefield and Mesa Ridge high schools, as well as an alternative high school, Discovery, will be held at the D-3 stadium and practice field.

“While it might not be traditional, we’re happy to be able to provide something in terms of a celebration,” Briggs said.

Widefield’s proms also will be at the district’s CA Foster Stadium at Widefield High.

"I can't wait to spend quality time with my friends before we head off into different directions upon graduation," 17-year-old Price said of her May 1 prom.

But she's disappointed all her relatives won't be able to see her graduate in person.

"My whole family watched my brother graduate in 2018, yet they’ll get to watch on a screen for me," Price said. "I’m thankful that restrictions have lightened up, it’s just still not the same."

Some proms are limiting attendance. At The Classical Academy, a K-12 charter school in Academy School District 20, only juniors and seniors are allowed at the April 28 festivities, which will be at a site in Larkspur in nearby Douglas County. TCA's graduation ceremonies are still being decided, spokeswoman Tisha Harris said.

Only seniors and early graduates of Woodland Park High School will be admitted to its prom, set for May 1 in the high school gym.

The football field will become graduation central on May 28. Spectator access has yet to be determined, according to Woodland Park RE-2’s website.

Mask-wearing at events is up in the air, as Gov. Jared Polis turns over pandemic control to county leaders on Friday.

Widefield D-3 is waiting on direction from county health.

Fountain-Fort Carson will require masks, as will Colorado Springs D-11

“We will also continue to monitor the COVID situation as we move forward,” Ashby said.

Editor's note: This article has been updated to reflect that Fountain-Fort Carson's graduation will require masks be worn.