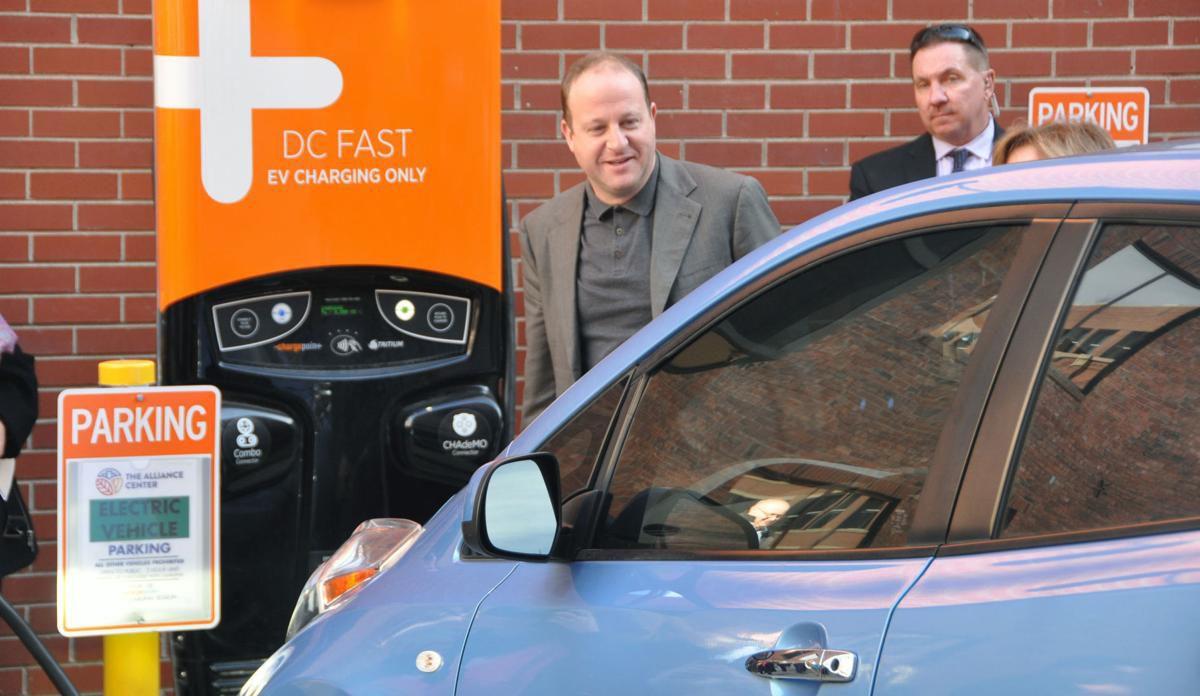 Colorado Gov. Jared Polis plugs an electric vehicle into a charging station before announcing executive orders aimed at increasing the number of zero-emission vehicles on state roads at a news conference Jan. 17 in Denver. 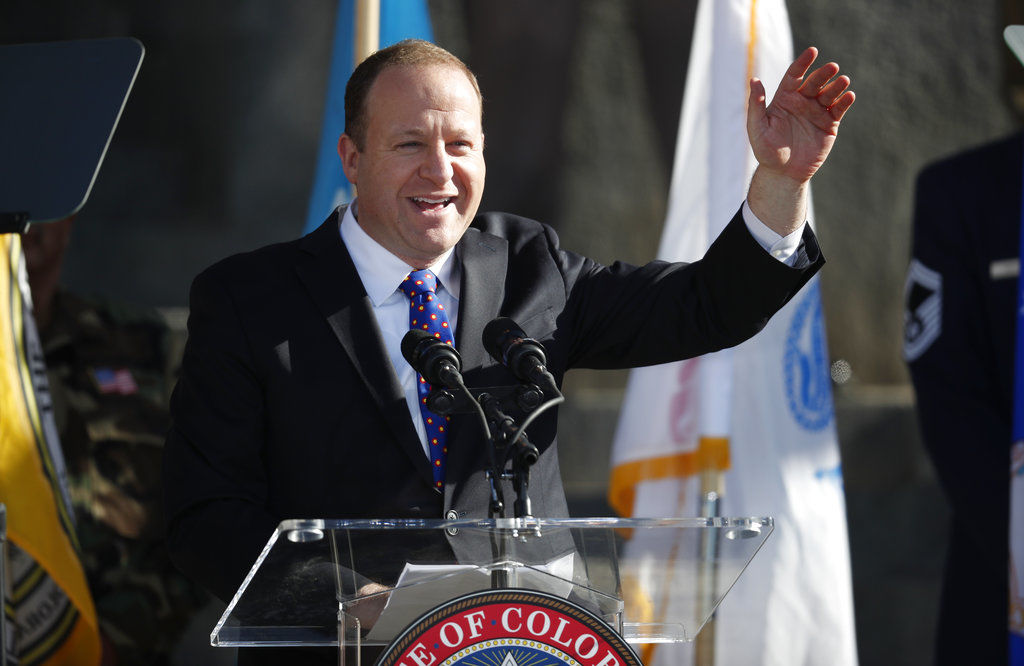 Colorado governor Jared Polis waves to the crowd after concluding his speech during the inauguration ceremony Jan. 8 in Denver.

Colorado Gov. Jared Polis plugs an electric vehicle into a charging station before announcing executive orders aimed at increasing the number of zero-emission vehicles on state roads at a news conference Jan. 17 in Denver.

Colorado governor Jared Polis waves to the crowd after concluding his speech during the inauguration ceremony Jan. 8 in Denver.

Citing his pledge to fight climate change by moving the state toward all-renewable electric power by 2040, Polis said the order will make it easier for residents to adopt electric vehicles while saving consumers money and providing widespread public health benefits.

“The time to act is now,” Polis said after arriving at a press conference in Denver’s Lower Downtown neighborhood in an electric car and plugging it into a charging station.

“I’m proud to say that in the absence of national leadership, states like Colorado, along with local governments and private and public companies, are leading the way on climate.”

The sweeping order signed by Polis — the first in the Democrat’s 10-day-old administration — directs state public health officials to send proposed zero-emission vehicle standards to the state’s Air Quality Control Commission. The rule, modeled on one adopted by California and nine other states, would require automakers to sell more qualifying vehicles each year.

“There are electric vehicles sold in other parts of the country that aren’t sold in Colorado,” Polis said. “It’s about increasing availability for consumers, having better prices for consumers, helping consumers tap into the savings from lower fuel costs. It’s really making sure we make electric vehicles, zero-emission vehicles more drivable and more affordable all over our state.”

In addition, the order creates a working group involving state agencies to support electric vehicles and directs the Colorado Department of Transportation to come up with a program promoting the vehicles.

It also steers the remaining proceeds from the state’s $70 million emissions-fraud settlement with Volkswagen toward “electrification of transportation,” including helping pay for public transit vehicles, school buses and trucks.

Tim Jackson, president and CEO of the Colorado Automobile Dealers Association, threw a flag on the proposal.

Noting that three-quarters of Colorado’s passenger vehicles are pickups and sport utility vehicles, he said in a statement that “Colorado’s challenging driving conditions” aren’t as suited to electric vehicles as other states.

“There is a reason you don’t see electric vehicles pulling horse trailers or hauling six kids to their events,” Jackson said.

He added: “Colorado’s consumers are also free to choose to purchase electric vehicles that are readily available on the market. Colorado’s consumers do not need the government telling them what vehicles they should buy. Let’s keep car-buying decisions in the hands of our citizens, not unelected California bureaucrats.”

Leading Senate Republicans blasted the executive order and suggested Polis, who has a background as a tech entrepreneur, let the free market do its job.

“This action does not encourage our automotive industry to innovate, it forces them to do so, and the result will undeniably be increased costs for Coloradans and lackluster, rushed products,” said Senate Assistant Minority Leader John Cooke, R-Greeley, and Senate Minority Whip Ray Scott, R-Grand Junction, in a statement.

“While the governor is correct in showing growth in the purchase of electric vehicles, what he forgets is that those in the lower and middle class of Colorado are undeniably sticking with gas-powered automobiles due to their overwhelmingly lower costs and reliability,” they said. “As the market brings down the costs of new technologies, demand will follow. Until that time, overreaching mandates will only impair the market’s ability to effectively respond.”

But one of their Republican colleagues, state Sen. Kevin Priola of Henderson, disagrees — and stood alongside Polis when the governor unveiled his orders.

“I look at it as a conservative, dollars-and-cents, good for the public, good for the consumer issue,” Priola told Colorado Politics. “There’s really no reason to stick with internal combustion vehicles.”

Priola said it was an easy decision to purchase an electric vehicle when he replaced a car last year.

“I did the math, and it was a no-brainer,” he said, adding that he’s paying about 2 cents per mile in fuel costs now, compared with 14 or 15 cents per mile before he went electric.

Priola said critics who claim that what Polis is doing amounts to market interference are off base.

“When internal combustion engine cars became ubiquitous 80 or 100 years ago,” he said, “there was a lot of (public) investment in infrastructure. Horses didn’t need asphalt. It’s a natural progression.”

Priola is a lead sponsor of bipartisan legislation to put set rules so utilities can build charging stations around the state, encouraging electric vehicle drivers to conquer what he called the last remaining obstacle — “range anxiety.”

The state already does plenty to encourage electric and other low-emission vehicles — from a $5,000 tax credit to a program that builds fast-charging stations along highways — but Polis said it isn’t enough if the state wants to have nearly 1 million electric vehicles in operation by 2030, a goal set by Polis’ predecessor, former Democratic Gov. John Hickenlooper, a year ago.

“In order to achieve the goals set by the state, achieve our climate targets, and reap the billions of dollars in economic benefits, we will need to accelerate transportation electrification,” Polis said in the order.

It’ll be a steep climb from the estimated 12,000 electric vehicles that were registered in the state in late 2017, but Polis noted that Colorado has already seen annual growth rates topping 50 percent.

“As we continue to move towards a cleaner electric grid, the public-health and environmental benefits of widespread transportation electrification will only increase,” Polis said in a statement.

Colorado is a national leader in electric vehicle sales, with the vehicles making up 1.57 percent of total light vehicle sales in 2017 — nearly double the 0.82 percent national average for the year, according to market data compiled by the Alliance of Auto Manufacturers.

In August 2018, the share in Colorado rose to 2.46 percent, putting the state’s percentage of electric vehicles sold for the month behind only California, Oregon, Washington, Hawaii and the District of Columbia.

According to a 2017 study cited in the executive order, a “large-scale transition” to electric vehicles by 2050 will yield $43 billion in net savings to Colorado consumers, including $4.1 billion in electric bill savings for all customers and $29.1 billion in savings by the vehicle’s owners. The reduced greenhouse gas emissions are projected to save an additional $9.7 billion in health costs, the study found.

“This is a really big deal,” said Kelly Nordini, executive director of Conservation Colorado. “It’s exciting for consumers. What the governor is saying to the auto industry is, ‘Bring all your different models of electric vehicles to Colorado so that we can have more choices.’ That’s really good for consumers and really good for clean air.”

She called the executive order a “good first step” for Polis as he makes good on his pledge to make Colorado a leader in combating climate change.

“He knows, Colorado is on the front line on this — wildfires, extreme weather, air quality impacts — and we’ve really benefited from the renewable energy economy, so we can keep growing that. It’s good for the economy, good for our air and good for climate change,” she said.

U.S. Rep. Ken Buck, who is running to head the Colorado Republican Party, now ranks among the few Republicans in Colorado supporting a state bill that fellow party members say has the potential to bankrupt the party.