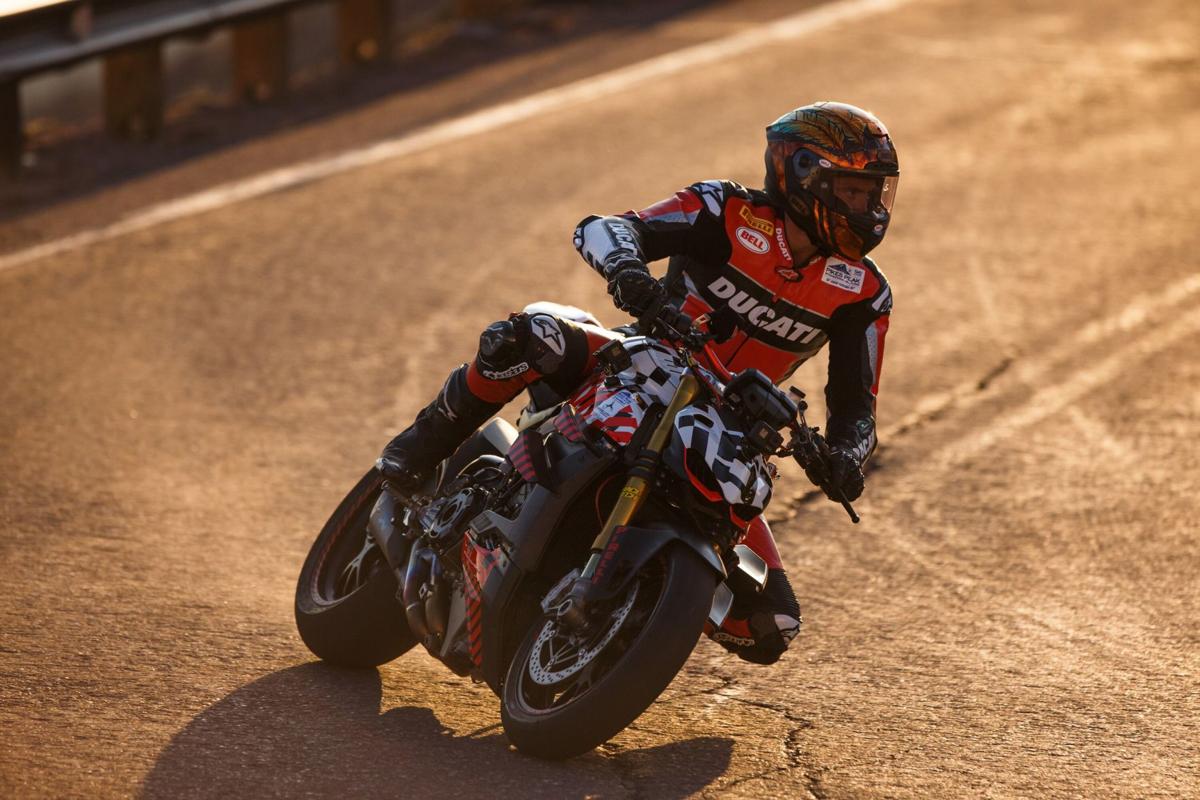 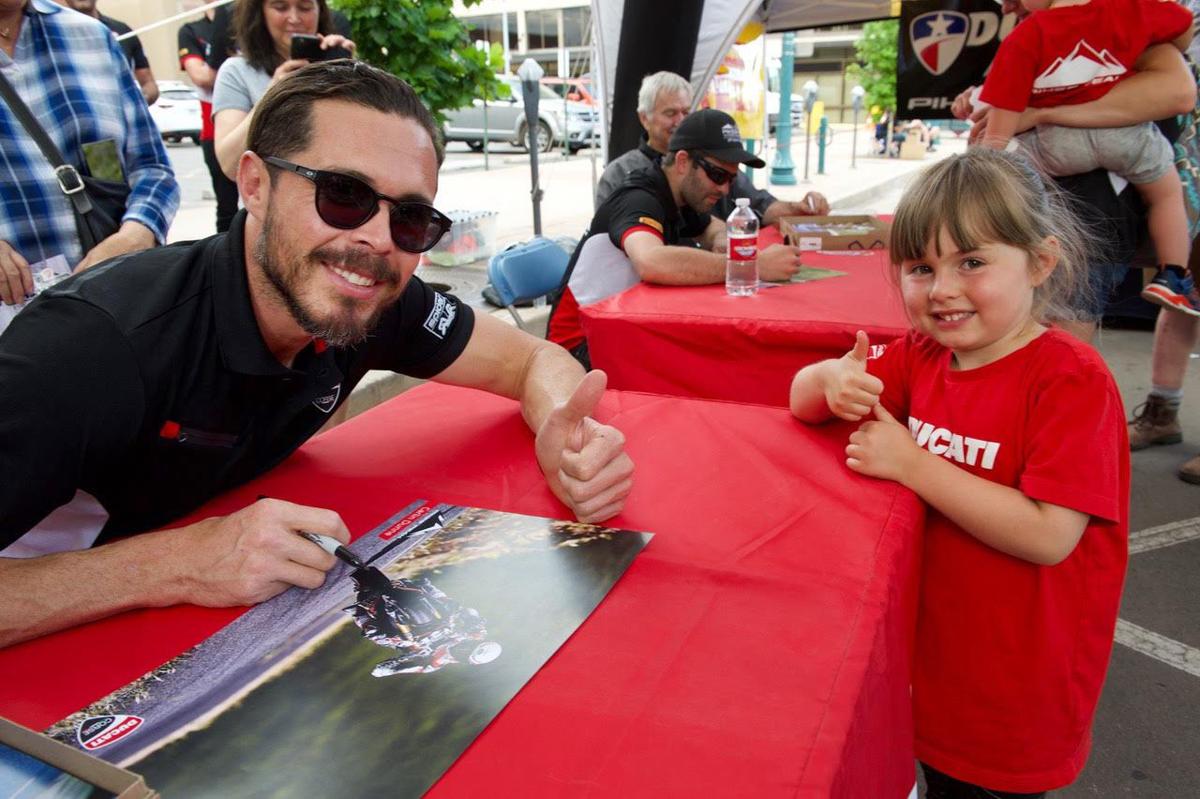 Photo by Ford McClave/Special to The Gazette 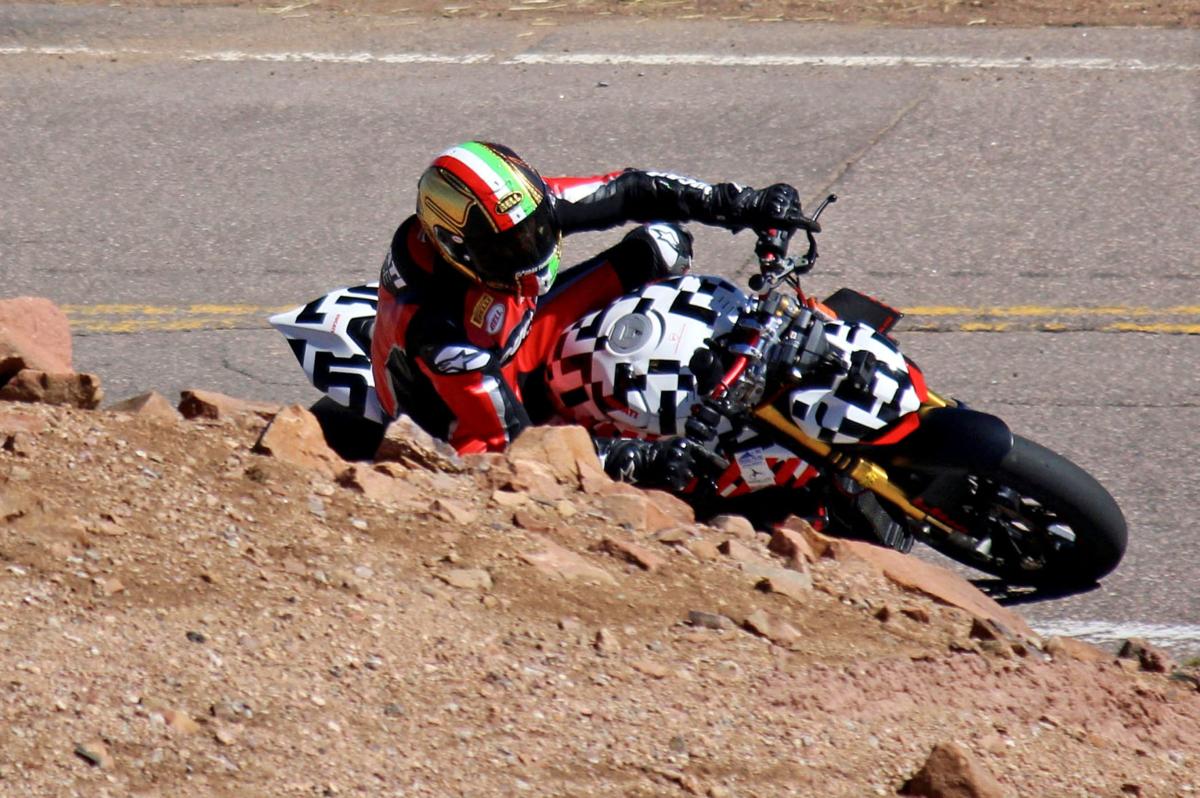 Carlin Dunne rounds the final turn of the 2019 Pikes Peak Hill Climb. The four-time champion hit a bump on the final straight stretch that sent him flying over the edge of the road in a fatal crash.

Photo by Ford McClave/Special to The Gazette

Carlin Dunne rounds the final turn of the 2019 Pikes Peak Hill Climb. The four-time champion hit a bump on the final straight stretch that sent him flying over the edge of the road in a fatal crash.

When Carlin Dunne’s mom got the phone call, she wept.

“He was my baby boy,” Romie Gallardo said Wednesday between tears.

His legacy is that of a son first. But “Carli,” as friends and family still call him, was everything.

Dunne died Sunday after his Ducati Streetfighter V4 Prototype crashed in the final blink of The Broadmoor Pikes Peak International Hill Climb. He was 36, a world-class motorcycle racer at the top of his sport, a human at the top of his race. His bike wrecked 20 yards shy of the finish line.

For years he ran a Ducati shop in Santa Barbara, Calif., with his father, Trevor Dunne, a former pro rider from South Africa. Carlin’s impact was felt in Italy, where the Ducati factory lowered its flags to half-staff. It was felt from Baja, Mexico, to Colorado, two places where his ashes will be spread. Dunne made himself from a 13-year-old working in a California seed factory into a global icon in racing — against his humble wishes.

“I am completely overwhelmed and grateful for all the love and support from around the world that’s been shown to him. I had no idea,” his Mom said by phone. “I always thought he was special, but I’m the mom. I’m supposed to. It’s just he just never thought he was a big deal. He never thought he deserved any more than the kid pulling up in the junky truck with a dirt bike in the back. And I think that’s because that kid was him.”

That kid rose to be a brother to grown men older than him. He was a big brother first to his sister, Daniella. She’s a 31-year-old equestrian whom Carlin adored. “She truly lost her big brother,” Gallardo said.

The racing world lost a lovely man. Dunne was the kind of guy who donated two years of his career, in his prime, to mentor new riders. He was a hilarious storyteller who inevitably turned the story to poke fun at himself. He almost always had his dog at his side — Sonny, a blue heeler, who ran alongside Carlin on mountain bike trails in the hills near Santa Barbara.

I spoke to five people Wednesday who knew Carlin. They are so lucky they did.

And right now they are hurting.

When Jason Chinnock got the text message, the CEO of Ducati North America was humming down U.S. 24 on his bike, alongside his father. They were just outside Manitou Springs as the message arrived: “Jason, call me.” Chinnock looked at his dad and said, “He didn’t make it.” And he swore.

Jason and Carlin were tight for over a decade. They had plans to mountain bike with their dogs this summer. They’d taken one of Jason’s favorite photos together, on a mountaintop near Sundance in Utah. There was something that Jason never told Carlin, and now he’d like to.

“You reflect on a lot of things in a time like this. Job, life, everything. And Carlin was 11 years younger than me,” he said. “But I looked up to him like he was the big brother I never had.”

Dunne wasn’t a series racer. He didn’t bounce between tracks to enhance his rep. Instead, he cherry-picked the biggies that carry earthly, not worldly, meaning: Baja, Bonneville, Pikes Peak. Trophies might as well have been toothpicks. “He was chasing something different,” says Chinnock, a graduate of Air Academy.

“He wasn’t racing another person. He’s racing nature. He’s racing the mountain,” Chinnock said. “He gravitated toward those sorts of competitions. The trophy wasn’t in his thinking.”

Dunne combined Hollywood looks with the humility of a man who wants no part of Hollywood.

“He’d get mad at me because we’d make our ‘super-slick’ videos,” Chinnock said. “He felt the videos made us look too much like superheroes. He wanted them to see us as regular people.”

Carlin was no regular person. He spent his life trying to make the rest of us feel comfortable.

Three motorcyclists have died in the Hill Climb in the past six years. Dunne won the race four times, yet not one of his friends, family or colleagues began with his transcendent talent on a bike — perhaps the finest testament to him as a man.

Dunne was all a superstar should be. Imagine Tiger Woods quitting golf for two years to teach lessons. (One mentee was the man who won the 2019 motorcycle title, Rennie Scaysbrook.) Or picture Peyton Manning stopping practice to offer pointers to a young quarterback. That was Dunne, who once astounded Ducati engineers when he felt the tire pressure on his bike was off by a half-pound.

“Cool Hand Luke. He was Cool Hand Luke,” said Paul Livingston, a close friend since 2008 and team owner of Spider Grips. “He’s got that twinkle in his eye. Guys wanted to be like him.”

When Paul and Becca Livingston got the phone call, they were in the waiting area at the base of Pikes Peak. Becca was like a second mother to Carlin. She broke down.

“He was careful, and not in the tiptoeing way. He was careful and thoughtful,” said Becca Livingston. “He didn’t do a single thing without considering how it would affect other people.”

Seventy-two hours after, the Livingstons had to pull over into a rest stop to talk about Carlin.

“You always know these things can happen. This sport has hazards,” Paul Livingston said. “But not with ‘Carli.’ Tell you the truth, I thought he was immortal. I believed he was immortal.”

A GoFundMe account was created for Dunne’s mom. In the first 8 hours, donations ballooned to $23,540. Their tradition — mother and son — was to share a phone call the night before every race. His final words before his final race was no different: “I love you, Mom.”

Dunne’s ashes will be brought to the Hill Climb in 2020.