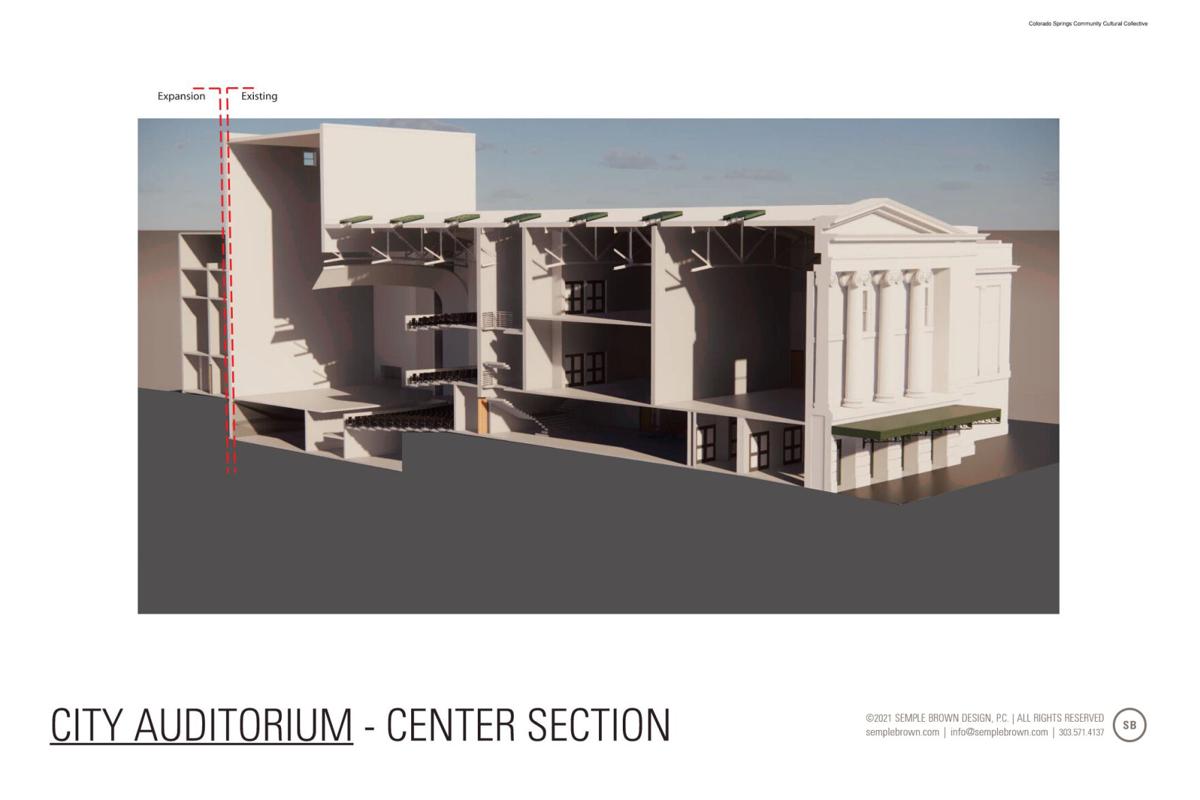 The plan to renovate the Colorado Springs City Auditorium would add a second and third floor for rehearsal, office and banquet space among other uses. An addition on the back of the building would house needed backstage space with dressing rooms and other necessary space. A portion of the basement could be turned into a speakeasy style bar.

A new nonprofit has agreed to secure $53 million by March 2023 in promised donations, grants, tax credits and other funding sources to renovate the Colorado Springs City Auditorium ahead of possibly taking ownership of the building.

The Colorado Springs Community Cultural Collective agreed to raise the money among a host of other steps as part of a recently finalized memorandum of understanding with the city that could set the stage for a renovation that could possibly add a restaurant, bar, rehearsal space, offices for nonprofits and updated theater space, among other additions.

"We have this incredible opportunity to create a vision that will serve in the same vein that the building was built in, in a relevant and updated way," she said.

Following renovation, the auditorium is envisioned as a self-supporting cultural hub and midsize venue that could draw in tourists, she said. Weise previously led the Colorado Springs Conservatory, a nonprofit expected to be a core tenant in the new building. The conservatory provides education in music, theater, drama, film and other arts.

As first steps, the Community Cultural Collective expects to identify $5 million in funding by February 2022, prepare a business plan for operations of the building, hold public meetings and begin designs under the recently reached agreement, according to a city news release. 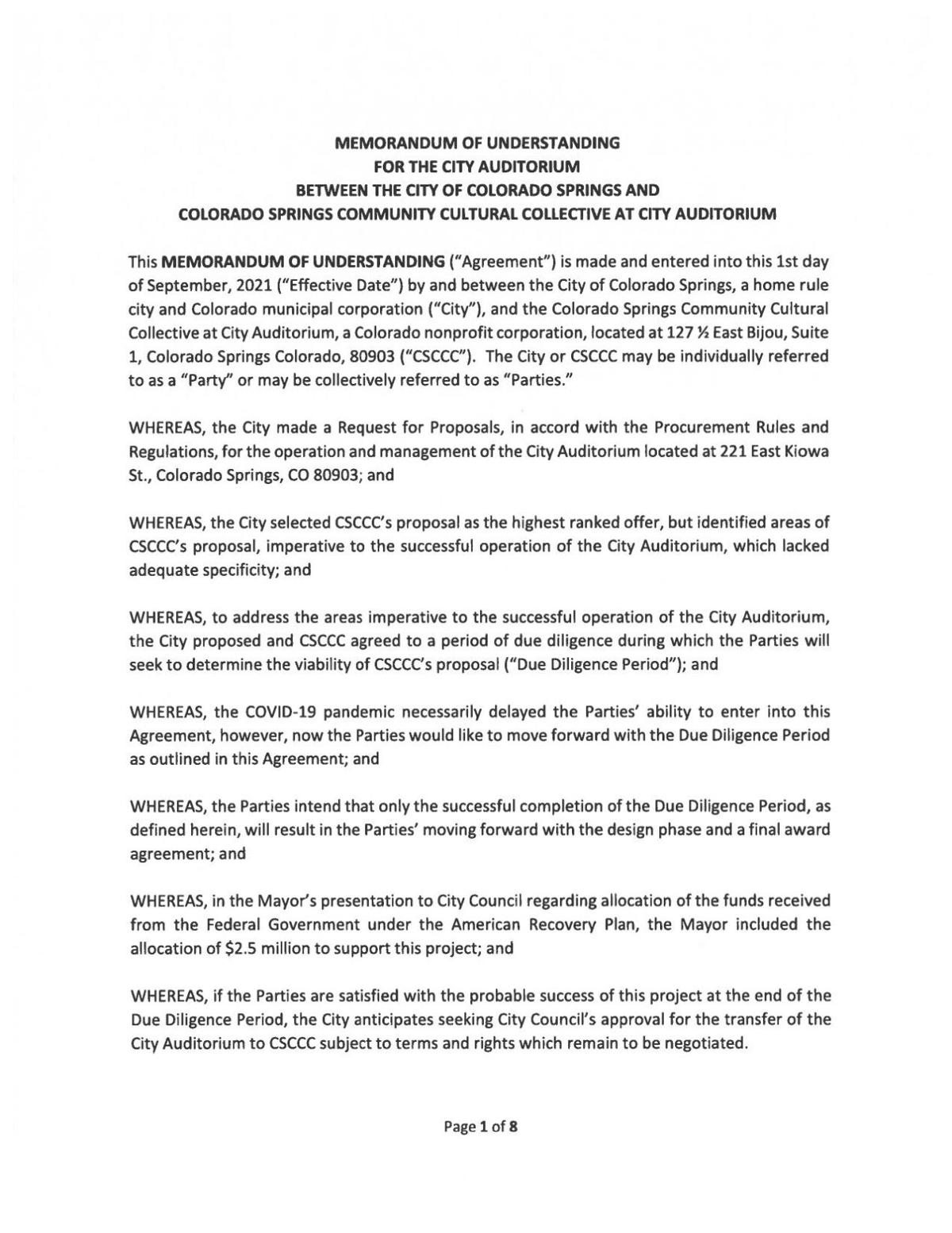 The nonprofit must secure the estimated $53 million the renovation is expected to require through promised donations, grants and tax credits and other funding sources by March 1, 2023, the release said. However, the city and the nonprofit could agree to extend the deadline, said Vanessa Zink, a city spokeswoman.

Successful completion of the agreement would not trigger a transfer of ownership. The nonprofit and the city would still have to reach an agreement on the design, construction, financing, ownership, professional management and operation of the building, the city statement said.

The nonprofit would need to have ownership of the building for the project to qualify for tax credits, city officials said previously.

The Colorado Springs City Council has already informally agreed to set aside $2.5 million of the $76 million the city received in American Rescue Plan money meant to revive the economy.

City Council President Tom Strand said he is still "on the fence" about the project and would be watching the progress that the nonprofit makes. He has heard from people who are concerned about the city losing control of the building.

"It’s almost a 100-year-old building that is historic and I want to preserve that history and I want to make sure we use that building to the benefit of all half-million people that we have got in the city," he said.

The city anticipates seeking the City Council's approval to transfer the building to the nonprofit, Zink said.

The nonprofit has an initial vision for the building to add new second and third floors that would fill currently unused space with rehearsal studios, office space and room for a large banquet hall. The square footage would be expanded from about 31,000 to about 90,000, Weise said previously.

The main performance and gym area may be remodeled into a modern venue with seating for 600, down from about 2,400. The gym floor would come out and an orchestra pit could go in. Mechanized seating that rolls into the wall could free up the floor to allow a standing event or tables.

An addition on the back of the building would house dressing rooms and space to work on sets and lighting, a necessary area the building is missing altogether, Weise said, previously.

The Lon Chaney Theatre, which seats about 230 people, could be moved from the east side of the building to the west side to free up space for street-facing businesses, like a restaurant.

Diverse tenants could help make the building sustainable and fill the building with life from 6 a.m. to midnight, she said.

"She’s about to turn 100 years old and I feel like she is an auntie that can only do so much right now and if we afford her the opportunity to have this moment and surgery. ... She’ll wake up after surgery and have another 100 years," Weise said.

Next week, the design team expects to visit the building for the first time in about two years to take inventory of its condition and do surface-level evaluations for hazardous materials, such as asbestos and lead paint, said Chris Wineman, a principal with Semple Brown Design. The group will also be evaluating how to protect items that need to be preserved such as the pipe organ, he said.

The Community Cultural Collective will hold public meetings this fall and winter for residents to provide input and feedback on the proposed facility uses and renovations. To sign up for notices about the meetings email PublicEngagement@CommunityCulturalCollective.org.

A grand vision for the Colorado Springs City Auditorium is in the works to transform the nearly 100-year-old building into a hub for the arts,…