Teens don't act like they want to hang out with their parents, but they really do, and providing more positive bonding time with adults can help decrease the likelihood of suicide, a new suicide-prevention initiative advises.

A grassroots movement a year in the making has produced a nine-point flyer to guide parents in helping youth navigate the often-troubled teen years.

“We talked to a lot of teens and got educated from outside experts,” said Kimberley Taylor-Beer, one of four primary authors of the flyer.

“It was an all-hands-on-deck collaboration created by local parents for all parents.” 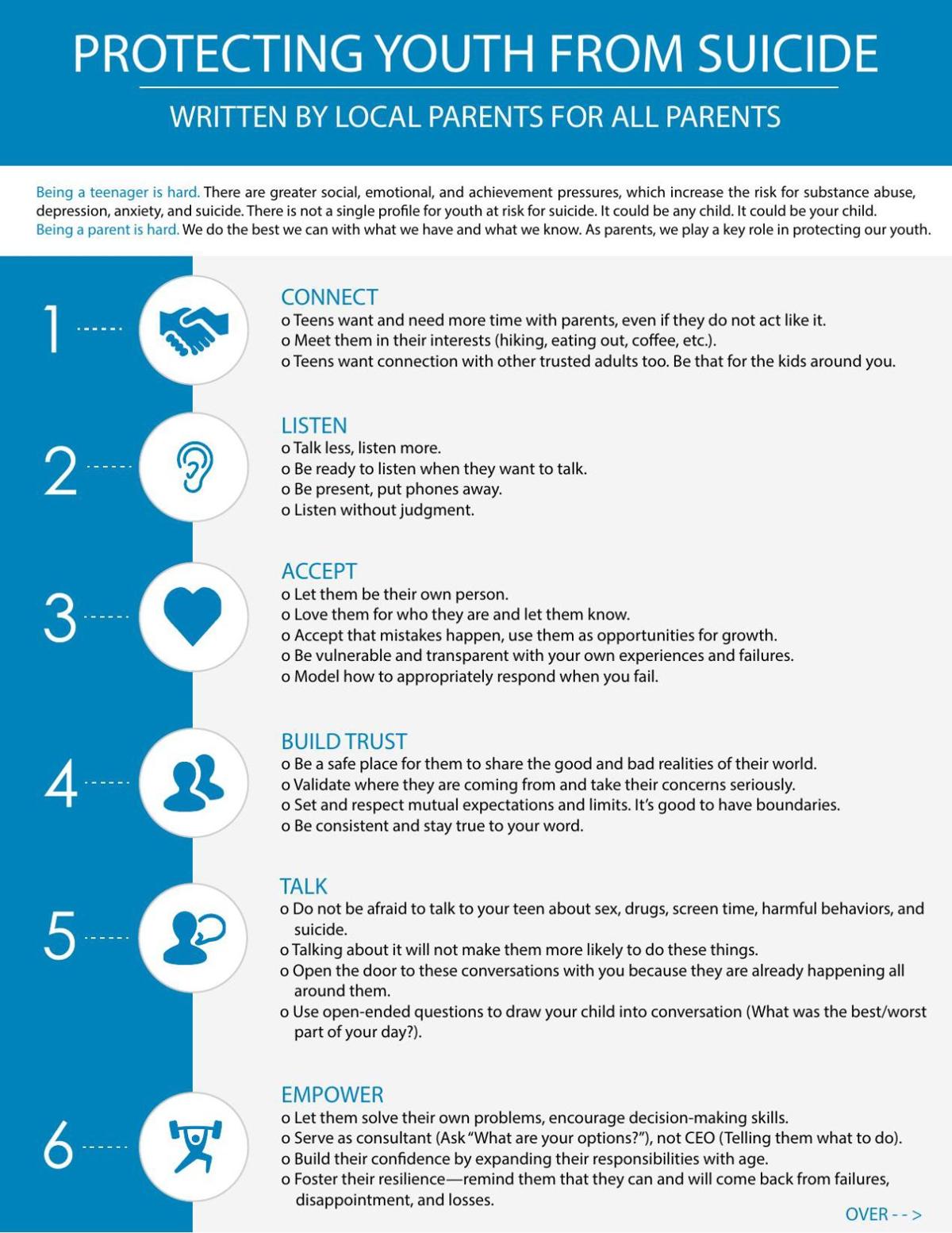 Each section offers simple tips for how parents can accomplish those elements with their teens.

The topic became a concern after teen suicides in El Paso County doubled in 2015 and hit a record high of 15 in 2016.

A common misunderstanding is that teens want parents to back off from their lives as they mature and move toward independence, Taylor-Beer said.

“So many parents take a hands-off approach with their kids, when the opposite is needed,” she said.

Teens need and secretly desire more time with their parents and other trusted adults, the flyer states. For example, going for a hike or grabbing a cup of coffee can provide the time for teens to open up and talk about what’s going on in their lives.

Listening without judgment also is important, the flyer points out, as is valuing teens for who they are, not what they accomplish.

“We’re such an achievement-oriented society that some parents push their kids so hard that it’s not healthy for the kids,” she said.

Family activities such as game nights, seated dinners and excursions also are among the factors listed as being necessary for teens to develop healthy minds and good coping skills.

Taylor-Beer attributes a decrease in teen suicide in El Paso County in the last few years to the work group’s prevention efforts and hopes the new flyer will provide further assistance to families.

However, this year has already been rough, with seven teens under 18 dying by suicide since Jan. 1, according to the coroner’s office.

Mental health impacts from the pandemic have not yet been fully been realized, experts warn. It's a worrisome addition to the stressors teens already face, Taylor-Beer said, including sexual activity, drug use, bullying, social media shaming, cutting, suicide ideation, family problems and other difficulties.

“Talking about these things will not make teens more likely to do them,” she said. “That’s a big misconception that professionals say is not the case.”

The flyer is available on the county public health department’s website at https://www.elpasocountyhealth.org/sites/default/files/2020-07/Parent%20Flier%206.26.30%20Combined.pdf.

JUUL Labs Inc. violated the Colorado Consumer Protection Act through its marketing of electronic cigarettes to children, and was responsible for creating the teen smoking epidemic in the state, according to allegations in a lawsuit introduced on Tuesday.