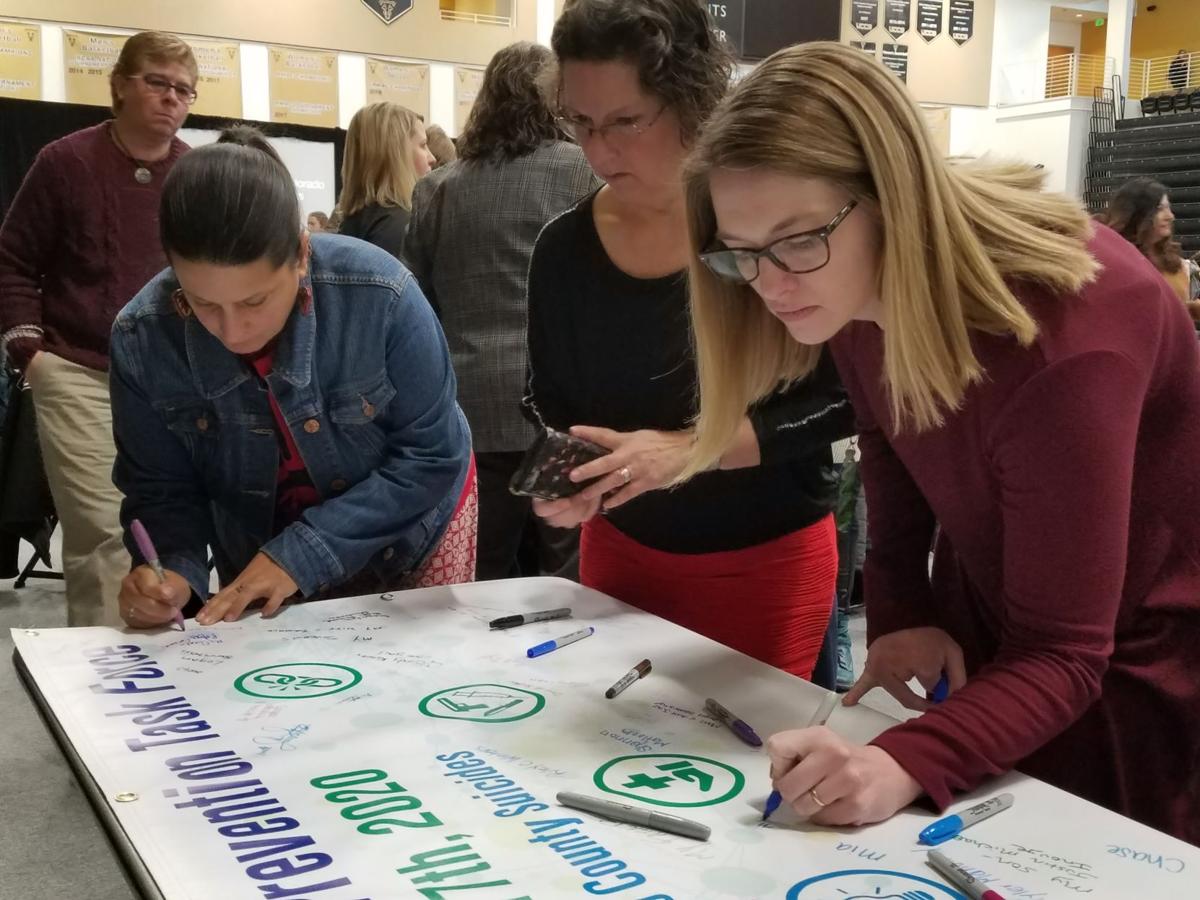 Attendees at Friday's "First Annual El Paso County Suicide Prevention Task Force: Call to Action" event signed a banner in memory of someone they knew who died by suicide, committing to work to lower the county's suicide rate by 20% by 2024. 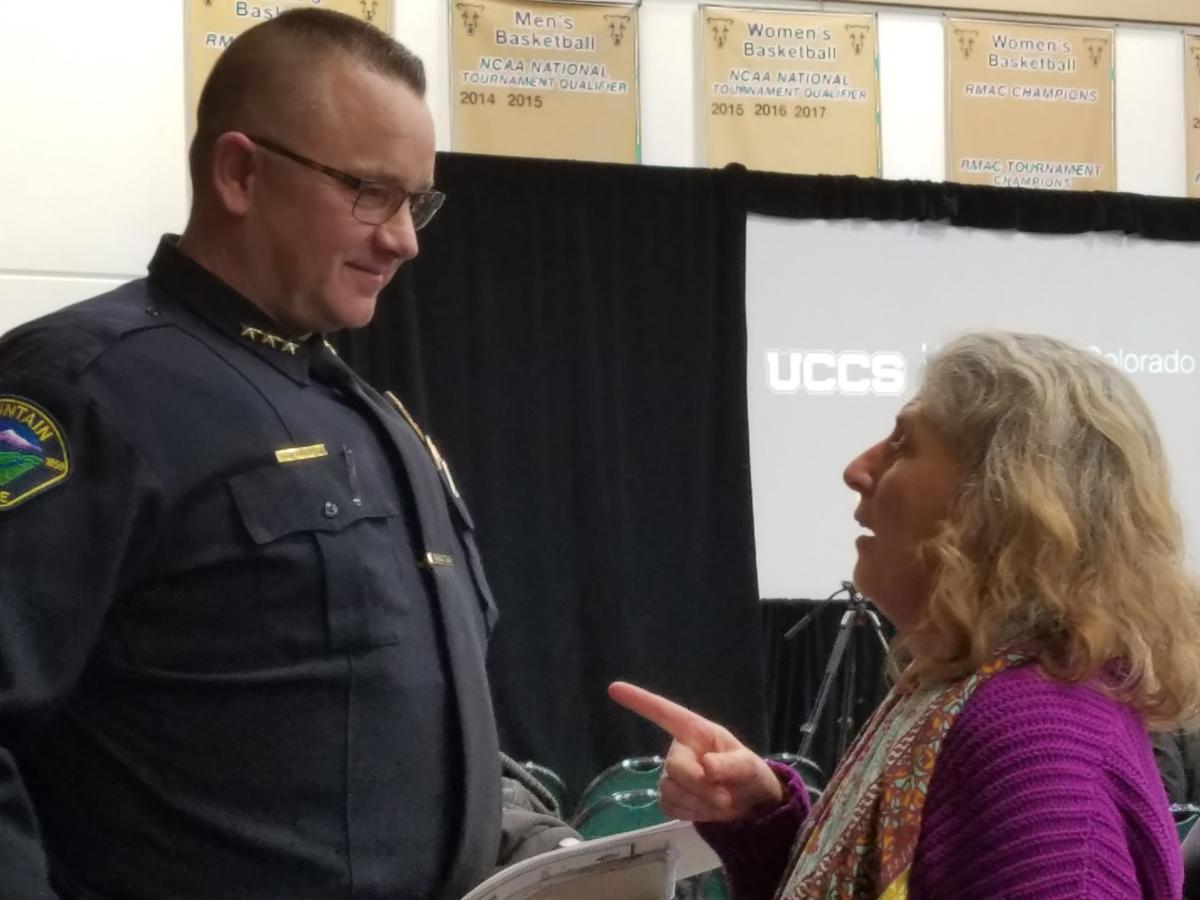 Attendees at Friday's "First Annual El Paso County Suicide Prevention Task Force: Call to Action" event signed a banner in memory of someone they knew who died by suicide, committing to work to lower the county's suicide rate by 20% by 2024.

No state has succeeded in demonstrating a measurable reduction in deaths by suicide, according to Sarah Brummett, director of the Colorado Office of Suicide Prevention.

Colorado is aiming to be the first.

More than 600 people filled an events center at the University of Colorado at Colorado Springs Friday with a singular topic in mind: reducing El Paso County’s suicide rate by 20% over the next five years.

“This is an important, personal and emotionally charged topic,” said Duane France, a veterans services specialist and one of the organizers of the new El Paso County Suicide Prevention Task Force, which took root at Friday’s conference.

The goal, France said, is to work with existing efforts and create new ideas in forming a communitywide public health approach to suicide prevention.

Steps include defining the problem, identifying the risks and protective factors, developing and implementing action plans, spreading the word, and evaluating and refining the process.

“It’s going to take everybody’s effort, everybody’s blood, sweat or tears, all 600 of us and all the nearly 1 million people in El Paso County,” said Chris Heberer, chief of police and public safety director for the city of Fountain.

“How many people do we have to save for it to count? One, in the realm of suicide.”

With the state’s epidemic-level suicide rate — 20.3 deaths per 100,000 residents in 2017 among all age groups, compared with the national average of 14 deaths per every 100,000 — Colorado is now ground zero among all states for finding solutions .

In 2015, industry experts identified siloed services and pockets of progress rather than widespread improvement as stumbling blocks to overcoming the nation’s concerning rise in deaths by suicide.

Nearly five years ago, a national group asked Colorado leaders to form a new initiative, the Colorado National Collaborative for Suicide Prevention. The groundwork is now coming to fruition.

The emerging project is an experiment to determine whether a communitywide public health approach can reduce self-inflicted fatalities.

Brummett said El Paso County’s suicide rate, which at 22.4 deaths per 100,000 residents in 2017 was  higher than statewide numbers, along with existing programs and deep-seated community attentiveness led to it being one of six Colorado counties forming task forces to execute action plans.

The intent is for the model that’s born out of the initiative to be successful enough that it can be replicated as a blueprint for other states, Brummett said.

“It’s not a school issue or just for hospitals or mental health professionals to fix,” she said. “Suicide prevention happens at the community level, and without community input there can be no success.”

Different strategies will be employed for different groups of people, from teens, young adults and working adults to seniors, military veterans, the LGBTQ+ community and people with disabilities.

Connectedness with other human beings and the communities in which people live and work is a necessary key to preventing suicide among all demographics, speakers said.

“We’re afraid of liability, of being responsible for someone’s life, and if we know the signs, our first instinct is to send them away to therapy, the crisis center, the hospital, and all of that is probably needed and is part of the puzzle,” she said. “But we forget human connection and how powerful it is.”

Feeling needed, valued and loved is a basic human desire, said David Galvan of Education for a Lifetime.

Wallace is calling for safe storage of guns in homes of vulnerable family members — unloaded and secured with trigger locks, cable locks or key-locked cases, or stored off-site — as well as locked prescription medications and alcohol, since many people ingested alcohol at the time of taking their lives.

People who attempt suicide often have a mental illness or breakdown, but Wallace said 90% have other risk factors, such as relationship problems, financial issues, military exposure, a criminal past, substance abuse, a suicide of someone they know, sexual abuse and others.

“Suicide is an impulsive decision for most people,” he said, adding that only one of 10 people who attempt suicide will go on to complete suicide during another attempt.

“If we do nothing else but limit access to highly lethal means we can reduce suicide,” Wallace said.

Earning a living wage, having enough food in the house, being able to find adequate mental health treatment and care, and providing follow-up to families that are touched by suicide are among the other areas needing attention, speakers said.

Several pointed out that El Paso County has made strides in decreasing teen suicides in the past two years, largely credited to concerted communitywide focus, similar to what’s being formed now for all age groups.

Morgan Lavender, a graduate student at UCCS and student and wellness educator, said with suicide being the leading cause of death for teens and young adults ages 10 to 24 years old in Colorado, such issues as high levels of stress, anxiety, sleep difficulties and depression are taking a toll.

“We need to find ways to promote human-to-human, peer-to-peer interaction stripped away by social media,” she said.

Among support groups at UCCS are one that promotes practicing happiness through finding self-love, compassion and reducing societal pressure from social media; another for sharing positive experiences and encouraging optimism and self-forgiveness; and Fitness Buddies, which encourages movement, enhances a sense of belonging and improves emotional well-being through support.

The strategies are working, Lavender said. In the 2017-18 school year, one in 2.6 students seeking mental health assistance at the college's wellness center were classified as emergencies; in 2018-19, the number improved to one in seven.

“The community needs approachable and affordable programs,” Lavender said. “Encouraging social connectedness will be what helps us fight this. Reducing mental health issues and stigma is the work of every person.”

Counselors and social workers from Widefield School District 3 were among the participants.

Like most others in the region, the district has been affected by suicide, said spokeswoman Samantha Briggs.

"It's good to see what solutions we're coming up with as a community," she said. "The turnout is amazing; it shows there's a need and a desire to help."

Children’s Hospital Colorado in Colorado Springs has begun an initiative to build “resiliency” among children through coaching in two local schools.