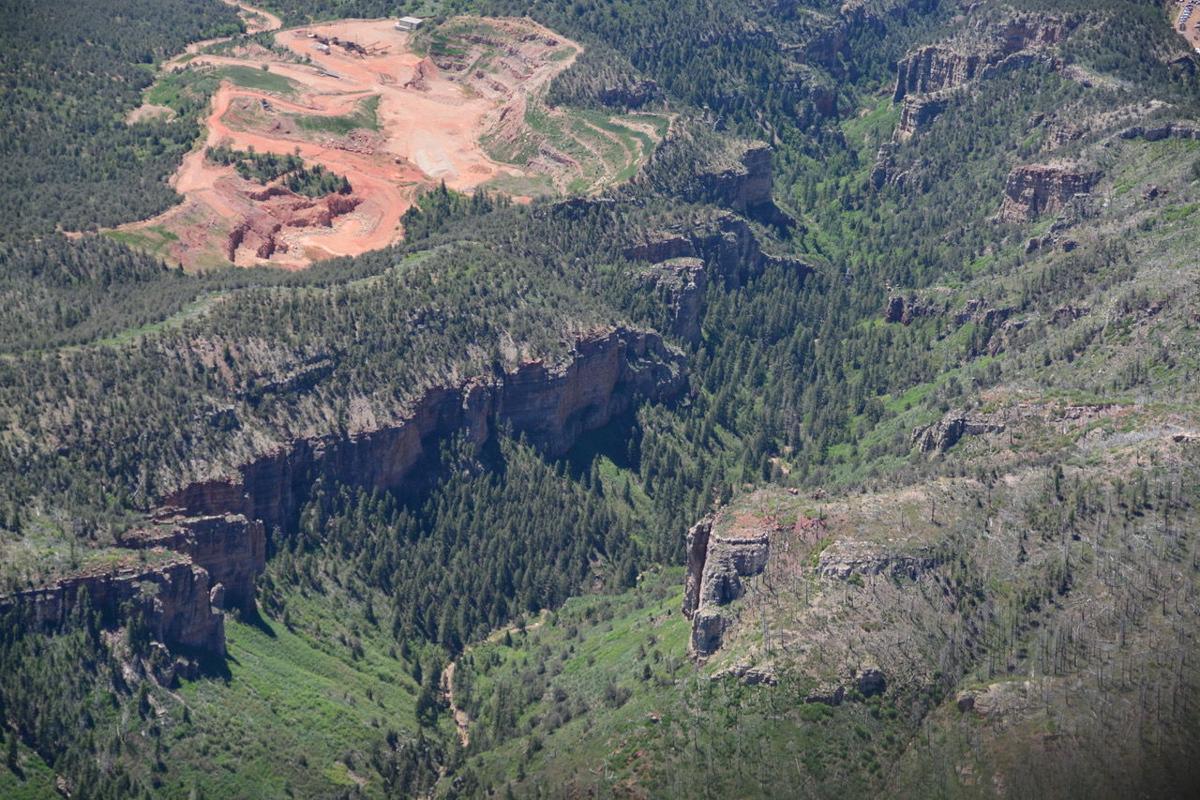 Black Canyon quarry is seen from a flight over the Waldo Canyon burn scar. Planners are eyeing the quarry for potential recreation access. 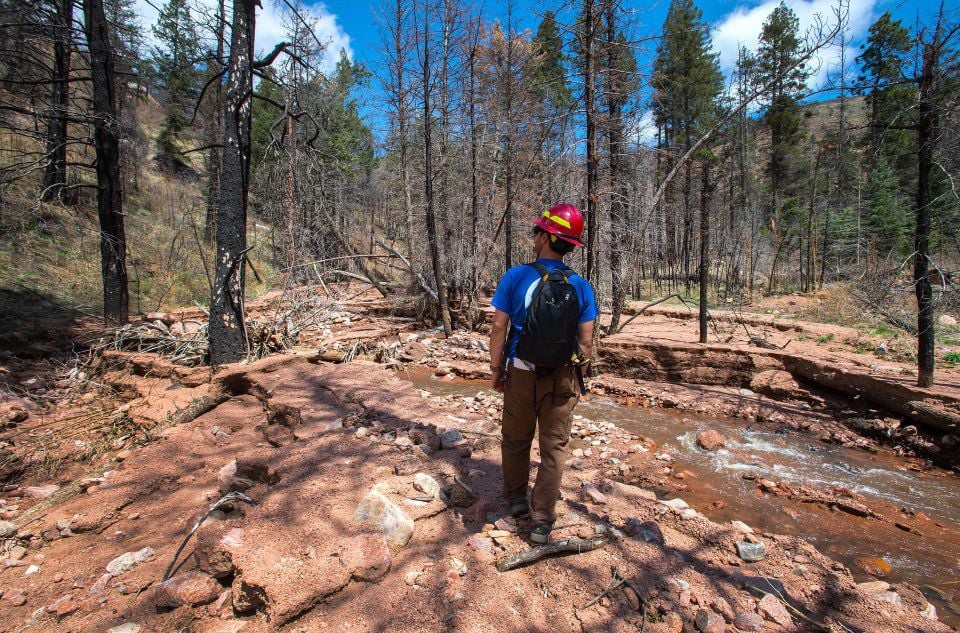 Joe Lavorini of Rocky Mountain Field Institute surveys the flood damage to the Waldo Canyon Trail just past the loop hiking clockwise in May 2015. 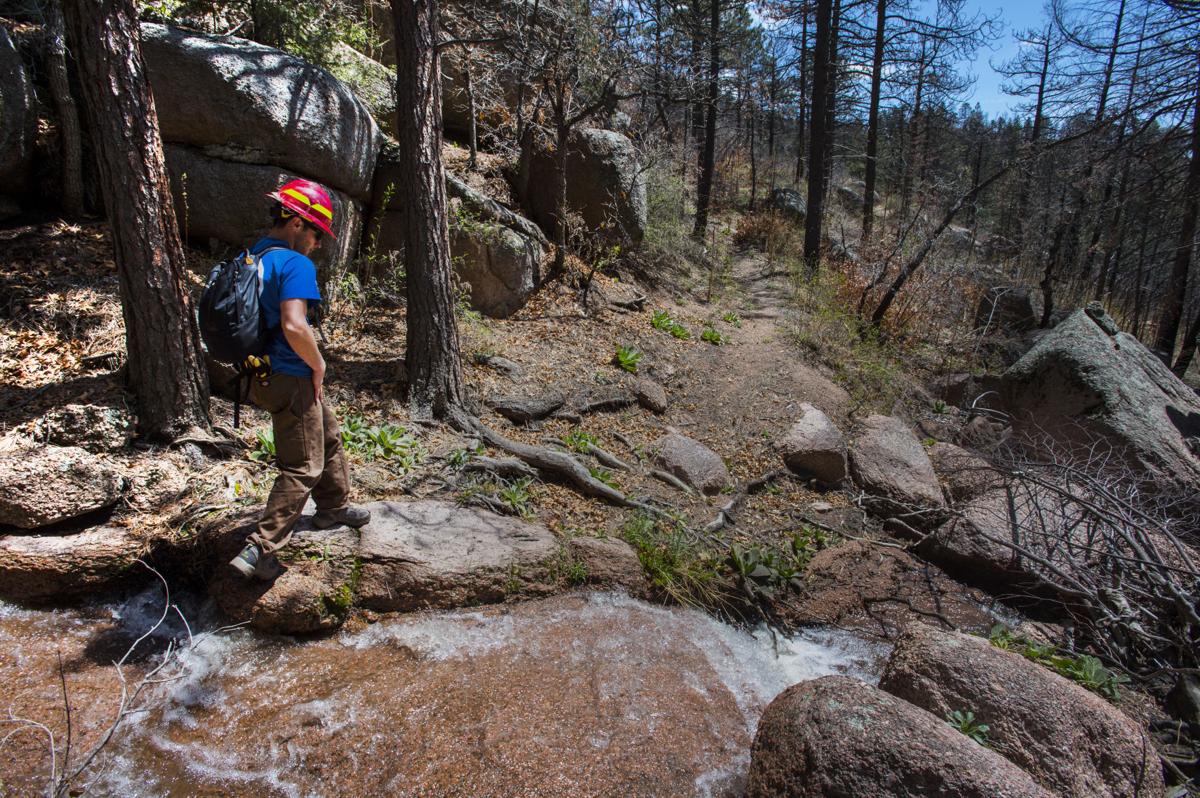 Joe Lavorini of Rocky Mountain Field Institute crosses a stream while hiking the Waldo Canyon Trail in this file photo from 2015. A return to the trail has been greatly anticipated since the fire devastated the area in 2012. File photo by Christian Murdock

Black Canyon quarry is seen from a flight over the Waldo Canyon burn scar. Planners are eyeing the quarry for potential recreation access.

Joe Lavorini of Rocky Mountain Field Institute surveys the flood damage to the Waldo Canyon Trail just past the loop hiking clockwise in May 2015.

Joe Lavorini of Rocky Mountain Field Institute crosses a stream while hiking the Waldo Canyon Trail in this file photo from 2015. A return to the trail has been greatly anticipated since the fire devastated the area in 2012. File photo by Christian Murdock

Those plotting the future of recreation in Waldo Canyon think they have a game changer.

That’s what Jennifer Peterson calls the Black Canyon Quarry, the mountainside scar on Colorado Springs’ west side, bordering the land beloved by hikers before the 2012 wildfire.

Peterson, the Rocky Mountain Field Institute’s executive director, convened land managers and advocates last summer for talks that started with the question: With the once popular trailhead off U.S. 24 deemed off-limits by U.S. Forest Service and highway officials, where could people be given access?

The quarry “could be the answer we’ve been looking for,” said Susan Davies, executive director of the Trails and Open Space Coalition.

It was the unwritten subject in Peterson’s recent message to Waldo’s interested parties, letting them know that next month’s open house would be moved to Jan. 22 “to allow sufficient time for important project developments to be finalized.”

Britt Haley, the city’s Trails, Open Space and Parks program manager, said TOPS’ sales tax revenues would be “the likely source of funding” for the land. An appraisal has been ordered for the 182 acres, she said, but a report has yet to come back.

At that size, the quarry’s “got potential to be way more than just a trailhead,” Peterson said. “There’s a lot of stuff that could happen. Like a true outdoor recreation hub.”

The exploration comes a year after another quarry emerged on city parks’ radar. While it was trying to get state approval to mine Hitch Rack Ranch, Transit Mix Concrete announced it would be willing to sell Pikeview Quarry for a long-desired bike park — what some viewed as a political tool for a proposal that would ultimately be rejected.

Pikeview is now under Castle Concrete Aggregates, as is Black Canyon. Both quarries are on a path to reclamation, but company President Jerry Schnabel declined to provide a timeline. (When the bike park was floated, Transit Mix said reclamation could be finished 20 years ahead of schedule).

Occasional stockpiles are sold from Black Canyon, but the revenue stream “has been very minimal,” Schnabel said. “Our preference would be to put it to the best public use possible.”

The Gazette previously reported on Pikeview’s “history of slope failures and rockslides,” as described by the Colorado Geological Survey. Black Canyon would be stabilized before any sale, Schnabel said. “We’d make certain the slope is very stable so the city doesn’t end up with a bigger problem.”

For recreation planners, the property seems too enticing to ignore. “It could provide the in-town access that people are craving,” Peterson said.

A conceptual map depicts nearly 30 miles of trail from four access points. One is marked at Black Canyon, on the road that splits near the Cedar Heights neighborhood gate. As it is, the road traveled by concrete trucks would be “woefully inadequate,” Peterson said, requiring widening.

But if accessible, city dwellers would have the quickest access to Waldo Canyon so far envisioned. As mapped now, the trail would follow a scenic rim, passing through the burn scar and following a good portion of the former loop.

The concept’s other three access points are along Rampart Range Road. From the Springs, adventurers would either catch the seasonal dirt track from Woodland Park or take it from Garden of the Gods — either way traveling more or less than an hour to the trailheads.

Without Black Canyon, “the overall vision can still be successful, but it would need to be scaled back,” said David Deitemeyer, city parks’ senior landscape architect. “And I do think Rampart Range Road poses some potential impacts to the overall success if that was solely used.”

Haley said TOPS’ working committee could discuss the quarry at its next meeting Oct. 2.

A tour of Colorado's state parks by the numbers

A new state park was announced for Colorado last week, but it could be a while before managers have a plan in place for access. In the meantime, get caught up on the vast and varied roster Fisher’s Peak joins. We give you the numbers.