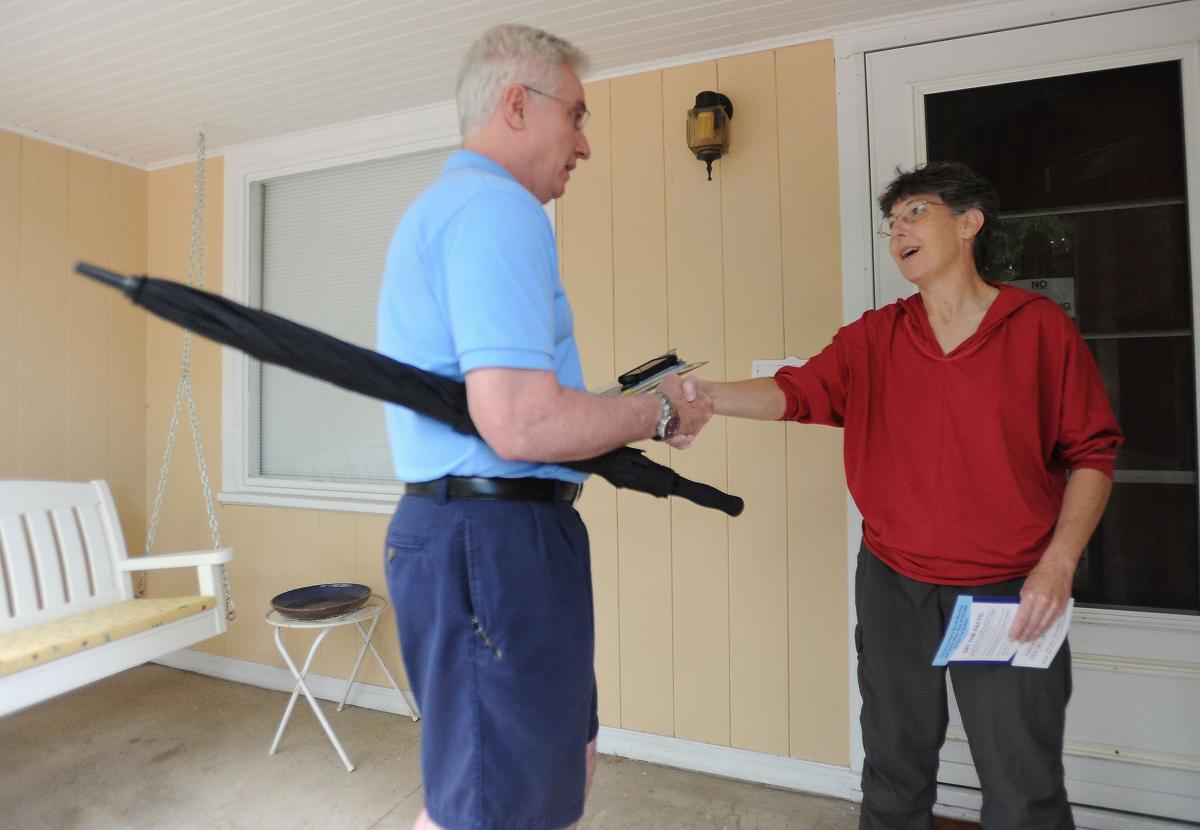 Penni Duncan pledges her support to Sen. John Morse when he visits her home on Tuesday, August 13, 2013. Every afternoon, Morse has been visiting his constituency at their homes to inform them of the Sept. 10th recall election. (The Gazette/Jerilee Bennett) 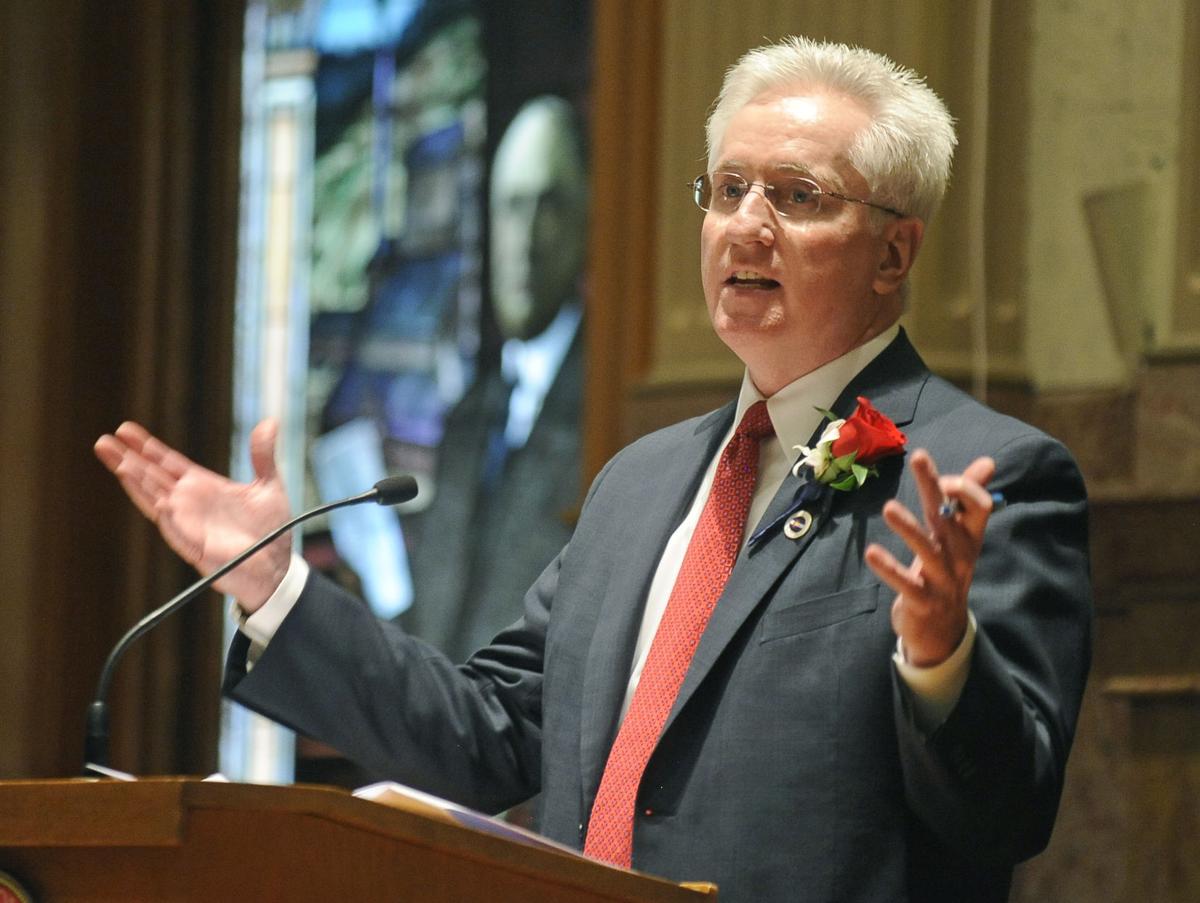 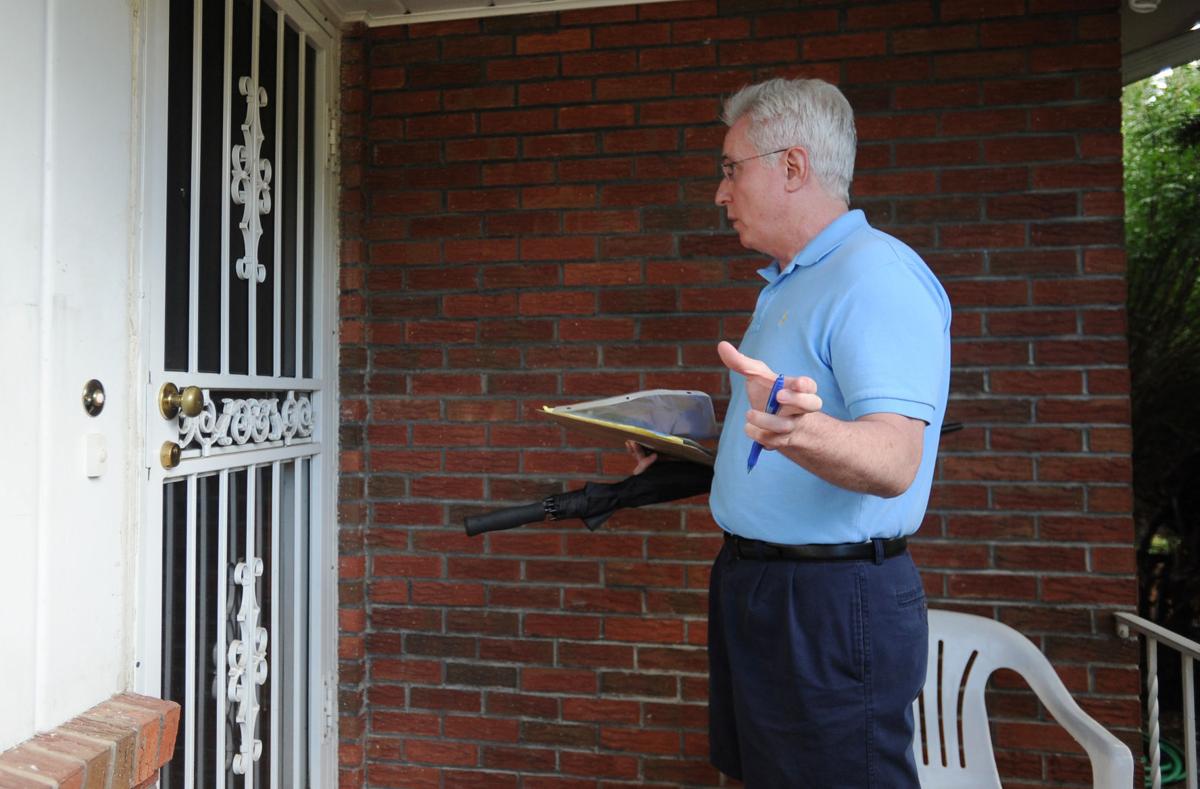 Colorado State Senator John Morse has been going door to door every afternoon to try to build support for the upcoming recall election on Sept. 10. He talks to a man through his front door who said he would give him his support on Tuesday, August 13, 2013 in Colorado Springs, Colorado. (The Gazette/Jerilee Bennett)

Penni Duncan pledges her support to Sen. John Morse when he visits her home on Tuesday, August 13, 2013. Every afternoon, Morse has been visiting his constituency at their homes to inform them of the Sept. 10th recall election. (The Gazette/Jerilee Bennett)

Colorado State Senator John Morse has been going door to door every afternoon to try to build support for the upcoming recall election on Sept. 10. He talks to a man through his front door who said he would give him his support on Tuesday, August 13, 2013 in Colorado Springs, Colorado. (The Gazette/Jerilee Bennett)

The rain had barely ebbed and the flash flood warning passed when Senate President John Morse knocked on the first door Monday evening in the West Divine Redeemer neighborhood.

That's the norm when the embattled state senator knocks on Democrat-friendly doors looking for supporters in Senate District 11.

On the line is the elected office he has held since 2006, when he defeated Republican Ed Jones with 60 percent of the vote to become the first Democratic senator from El Paso County since 1974.

When a door opens a few blocks farther down, Morse explains to Devin Wade that the National Rifle Association is attempting to oust him from office because of five gun bills lawmakers passed during the 2013 legislative session.

"We just don't think it's the right use of the process," Morse says. "It's something that should be decided on Election Day."

Wade, who listens to Morse for several minutes, doesn't commit to voting one way or the other.

"I think it's respectable that you come door to door," Wade says. "I think the process is there for a reason. That's why this country works."

From there, things get better for Morse. In a little more than an hour, four voters promise to check "no" on their recall ballots when they get them in the mail and promptly send them back.

"It's highly effective. That's why we commit to doing this," Morse said. "It's tedious. It's boring. But it works."

A few hours later, a Denver District Court judge put a serious hitch in those promises to mail back ballots promptly.

Because of a ruling by Judge Robert McGahey, there won't be any mail ballots in the Sept. 10 recall election - not even for absentee voters or those who have requested mail ballots permanently.

Instead, voters will have to cast votes at early voting centers or special voting service centers on Election Day. The ruling was challenged Wednesday by Pueblo County Clerk and Recorder Gilbert Ortiz.

If the Colorado Supreme Court upholds the ruling, it will likely make things tougher on Morse.

"None of my campaigns have been easy," Morse said, who narrowly won re-election in 2010 against the GOP tidal wave that year. "This one will be very, very close because the opposition is so committed.

"People say, 'I haven't even heard of it' . that's what we'll be fighting against," he said.

The committed opposition is a group from across the state loosely organized as the Basic Freedom Defense Fund. The group targeted four Democratic lawmakers who supported gun legislation and were able to force recall elections in two districts: Morse's and that of Sen. Angela Giron, D-Pueblo.

In El Paso County, paid and volunteer petition gatherers collected more than 16,198 signatures turned in to the secretary of state.

The group's efforts were fueled by people angry over the gun laws, which they say violated their Second Amendment rights, and over a controversy regarding public comment, which was limited on the legislation.

Morse points out to anyone who happens to be home that 6,061 of those signatures were rejected for a variety of reasons.

"There's all kinds of forgery that took place," Morse says. "One woman signed the petition who died two years ago."

Accusations of fraud and forgery were submitted to the El Paso County District Attorney's Office by Democrats, but there have been no charges or formal investigation.

Only 7,178 signatures were needed to take the recall to voters.

Morse also likes to point out that makes him the second-easiest lawmaker to place on a recall ballot in the state.

The threshold for forcing a recall election is collecting at least 25 percent of the number of voters who cast ballots in the last election for that official. Of the roughly 66,241 voters in Morse's district that year, only 28,712 people voted, or 43 percent. Today, there are 69,085 voters in Senate District 11, which has changed slightly since redistricting.

The ballot will include 200 words from those trying to oust Morse from office and 300 words from Morse in his defense.

Voters will be asked whether Morse should be removed from office.

A second question will ask: If Morse is recalled, who should replace him?

So far, only Republican Bernie Herpin, a former Colorado Springs City Council member and active gun rights supporter, has turned in the 1,000 signatures needed to get his name on the ballot.

The ruling from McGahey, however, has extended the deadline for signatures, allowing other candidates until Aug. 26 to get on the ballot.

The Libertarian Party, which sued for the extension and won under constitutional grounds, said Jan Brooks will attempt to collect the required signatures.

"This return to proper constitutional law gives us, the El Paso County Libertarians, the privilege of putting forth an excellent candidate," Liz Oldach, the party's El Paso County chair, said in a statement Wednesday.

In a district with more voters registered as independents than Republicans or Democrats, that might be a significant addition to the ballot.

The recall process has been a saga played out in district court amid challenges and legal arguments full of interpretations and politics. It's the first time in state history that a state-level elected official has faced a recall election.

Morse has one more legislative session - five months long - in office before he is term-limited.

He isn't going down without a fight.

Will Heberlein says he'd never heard of the recall when Morse arrives on his front porch.

Morse describes the five gun bills at issue: universal background checks, public fees for background checks, a ban on high-capacity magazines, allowing confiscation of firearms from those accused of violent domestic abuse, and a mandate that concealed carry training occurs in person not online.

"Those all sound like very reasonable things for me," Heberlein says. "Thank you for helping me have more information."

Heberlein promises to send back the mail ballot with a "no" vote when it comes - which likely it never will.

• The El Paso County Libertarian Party announced it will try to obtain 1,000 signatures on petitions so its candidate, Jan Brooks, can have a spot on the ballot.