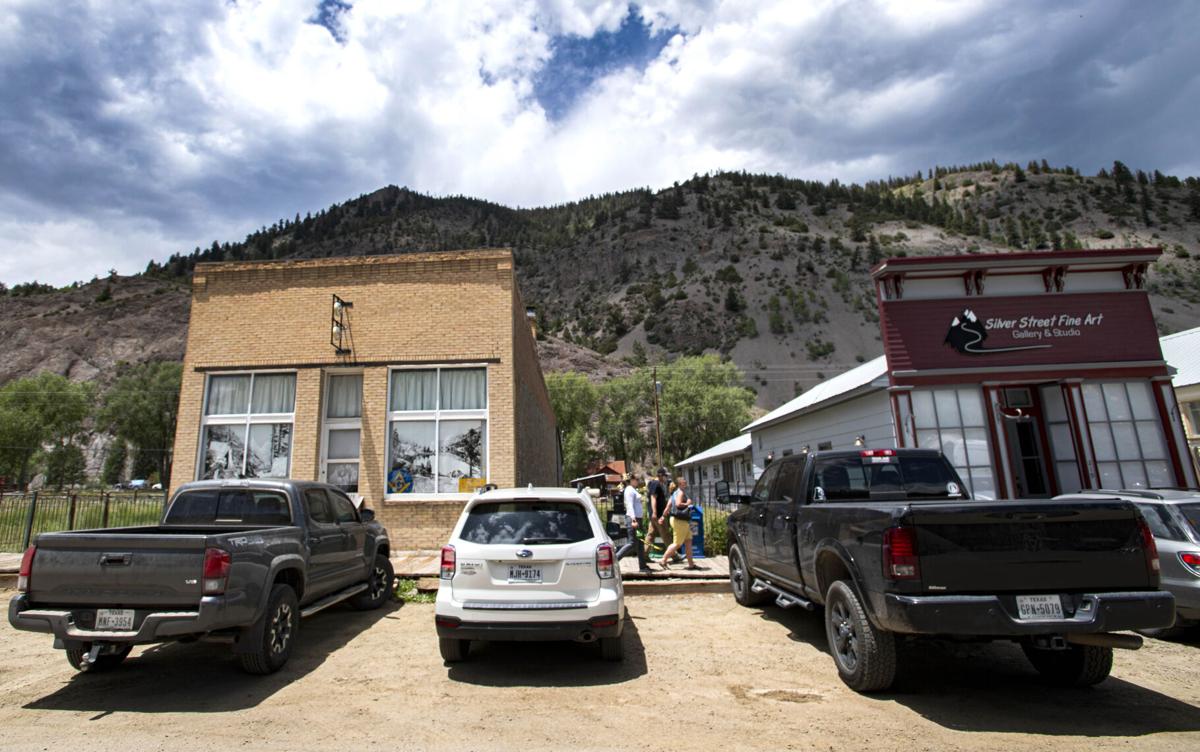 A row of vehicles with Texas license plates line Silver Street in Lake City this month. Colorado mountain towns, such as Lake City, are worried about the spread of COVID-19 as tourists from hot spots such as Texas and Arizona vacation in their communities. 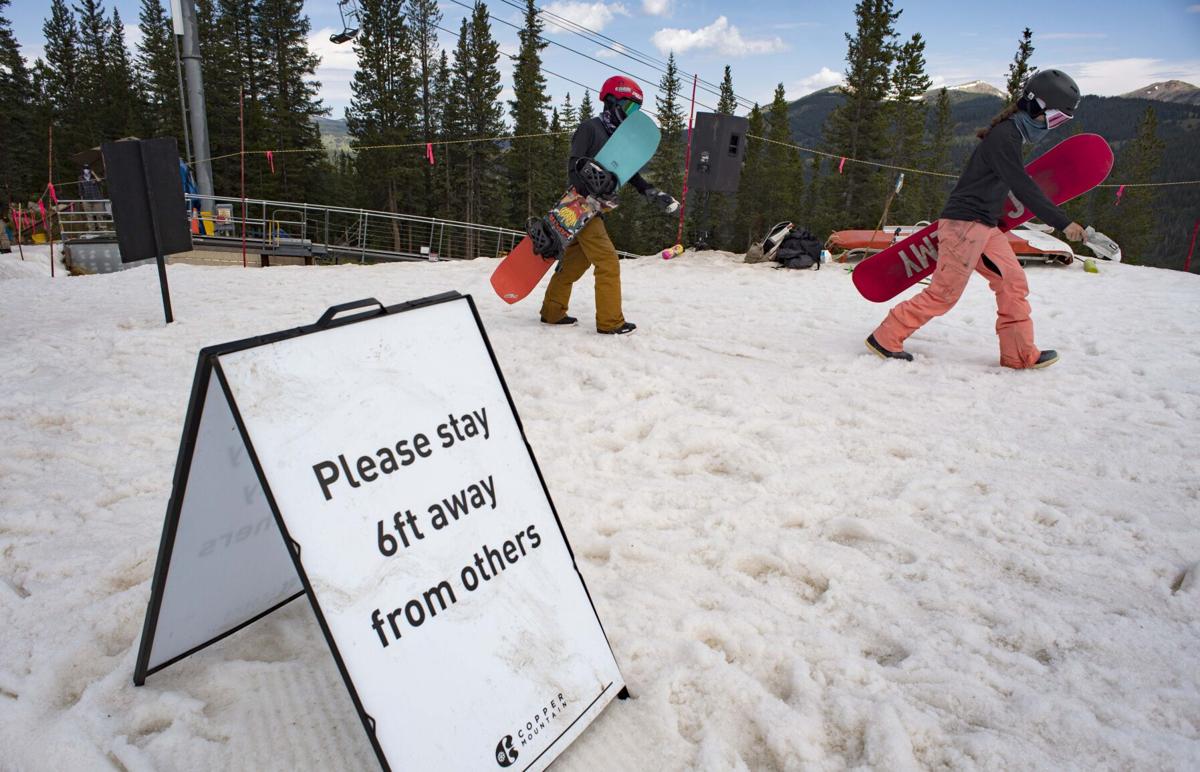 Snowboarders practice social distancing as they use Copper Mountain’s Central Park on Thursday during Woodward Copper’s day camp. The ski resort’s overnight camps were canceled because of the COVID-19 pandemic, but daily classes are being offered through Aug. 15.

A row of vehicles with Texas license plates line Silver Street in Lake City this month. Colorado mountain towns, such as Lake City, are worried about the spread of COVID-19 as tourists from hot spots such as Texas and Arizona vacation in their communities.

Snowboarders practice social distancing as they use Copper Mountain’s Central Park on Thursday during Woodward Copper’s day camp. The ski resort’s overnight camps were canceled because of the COVID-19 pandemic, but daily classes are being offered through Aug. 15.

CREEDE — The mayor was not flipping hot dogs as he normally would be here on such a sunny, summer day.

When he's not tending to official business in this historic tourist town in southwest Colorado, Jeffrey Larson fires up the grills of the Best Little Dog House. But as the crowds have returned to Main Street, the grills have remained cold.

Local health officials have been tallying more positive cases of COVID-19 in recent days; the list was approaching 20 heading into the weekend, which might not seem like many.

Polis says US coronavirus testing 'is a complete discgrace'

But it seems so to some within this year-round population of about 300. They know the situation of their nearest medical facility — typically fewer than 20 beds available. They know testing is limited, aware of infections going undetected. And they look to Main Street and realize their population has once again quadrupled, the Texans and Oklahomans and other out-of-staters back again for their second homes, and this time, suspicious minds wonder if they've brought along the world's infamous, invisible invader.

Usually this time of year, there's a celebratory buzz about Creede. Now the repertory theater has gone dark, silent with the churches. The people are here, but sometimes it can get so quiet that they can hear the paper flyers waving in the wind, asking them to please mask up.

Folks got nervous back in June, Larson said. There was a dance at a bar, before bars were ordered to close statewide. One attendee later reported testing positive.

The bars closed. As did a gift shop for a while, because an employee tested positive.

Now the grocer is nervous, Larson said. One positive test from a worker, and the only substantial food shelves around for many miles could shut down.

"And that would be a disaster for Creede," Larson said.

Creede might be a cautionary tale for Colorado's much-beloved mountain towns, whose economies depend on visitors and seasonal residents. But now these places find themselves in a Catch-22.

The money is flowing, but could that be at a cost to health?

"There's certainly that nervousness," said Eagle County Commissioner Kathy Chandler-Henry, representing one of Colorado's early sites of outbreak; outsiders had come to the ski slopes with the virus. This week, the county's emergency manager warned of another "critical tipping point."

And the alarm has been sounded in other parts of the state boasting similar alpine beauty, destinations assumed to be escapes from everything else.

But with the coronavirus, that would be an incorrect assumption, Larson said. "It is here."

On the other side of Slumgullion Pass from Creede, Larson's counterpart is hearing businesses had their best June ever. Lake City again has the look of "North Texas," as it's colloquially called, with that state's license plate seen in every direction, the college colors flying from porches. The majority of Lake City homes are second homes.

"We hope for the best," said Mayor Bruce Vierheller, pleased to still see no spread in town. "But we're taking it day by day, week by week."

He knows, of course, that Texas is one of America's hot spots for the virus. Near the end of June, the state's public health department grimly reported one out of every 10 test results coming back positive.

Cases have soared there, as they have in Arizona and Florida — two other states along with Texas that Colorado's top epidemiologist mentioned in a press conference Thursday with Gov. Jared Polis.

In announcing the state's mask order, Dr. Rachel Herlihy listed "importation of cases from outside of Colorado" as among factors contributing to what she described as a "rapid increase" of infection here.

In a previous press conference following July 4, Polis was disturbed by an estimated 75,000 and 100,000 Texans, Arizonans and Californians coming to Colorado for the holiday weekend.

"People can drive here, and frankly we don't know who they are, where they are," he said. "It's one of the reasons that we need a nationally-coordinated strategy on coronavirus that thus far has been lacking."

The governor has encouraged "the vast, great outdoors" as part of his guidance. And people are indeed flocking.

And while that would seem good, there's been "some confused emotion" around business and safety, Wood said. "The busier we get, the more concern there is."

Concerns were enough heading into the summer for Gunnison County commissioners to draft a resolution barring second homeowners from returning. That was swiftly scrapped with the Texas attorney general threatening to sue.

"That wasn't in trying to push out second homeowners; it wasn't trying to say you're not important," said Jonathan Houck, chairman of the commissioners. "It was a capacity issue."

It was the local hospital at the time counting 24 beds and no intensive care units, Houck said. And it was the tense episode the county had experienced in the early stages of the pandemic, becoming one of the nation's most infected locales. The highway signs told travelers to turn around.

Also, it was somewhat personal, Houck admits. His wife had started feeling exhausted and then tested positive. Their teenage son felt a constant headache. Their teenage daughter couldn't taste anything.

They all recovered just fine. Business, too, has recovered.

And now, Houck said, the valley is bracing for more sickness.

"The response was really quick and people collectively understood the idea of flattening the curve," he said. "Now I think a lot of mixed feelings came when this heightened awareness started to wear off. 'OK, we've flattened the curve, now what?'

"So that's been one of the hard things to lead through and manage through, because the outward appearance is we're relatively stable. Getting folks to understand the long haul of this has been a challenge."

With the five-day average for cases doubling this week, Eagle County rolled back group sizes allowed in the resort towns along Interstate 70. Troubling trends are also being noted farther west through Glenwood Canyon.

A Garfield County news release this week reported an average of more than 49 cases a week for the past three weeks. "This is a marked increase from May when the county was experiencing approximately eight cases per week," the release said.

Gov. Jared Polis is hoping his statewide mask order helps to decrease numbers, as health officials have suggested. Local orders had been in place, including in Gunnison County. Some have scoffed at masks, Houck said, while others wouldn't mind repeating history: During the Spanish flu, the town of Gunnison declared a "quarantine against the world," going as far as arresting violators of the rules.

This is a complicated time in which requesting something like a mask is a complicated request. It's been a hard sell in Creede, Larson said, thinking of a friend, an elderly woman at the grocery store.

Her job has been giving masks at the door for anyone not wearing one — what the boss has deemed essential in the fight to stay open. Larson's friend has left discouraged many days.

"She says people get offensive and mad at her when she asks them to wear a mask," he said. "She said, 'Don't they understand this is the way we make our living?'"

Towering at 14-feet tall while sitting down, Halvor Flowstone is sure to be a favorite photo opportunity for families touring Colorado during …