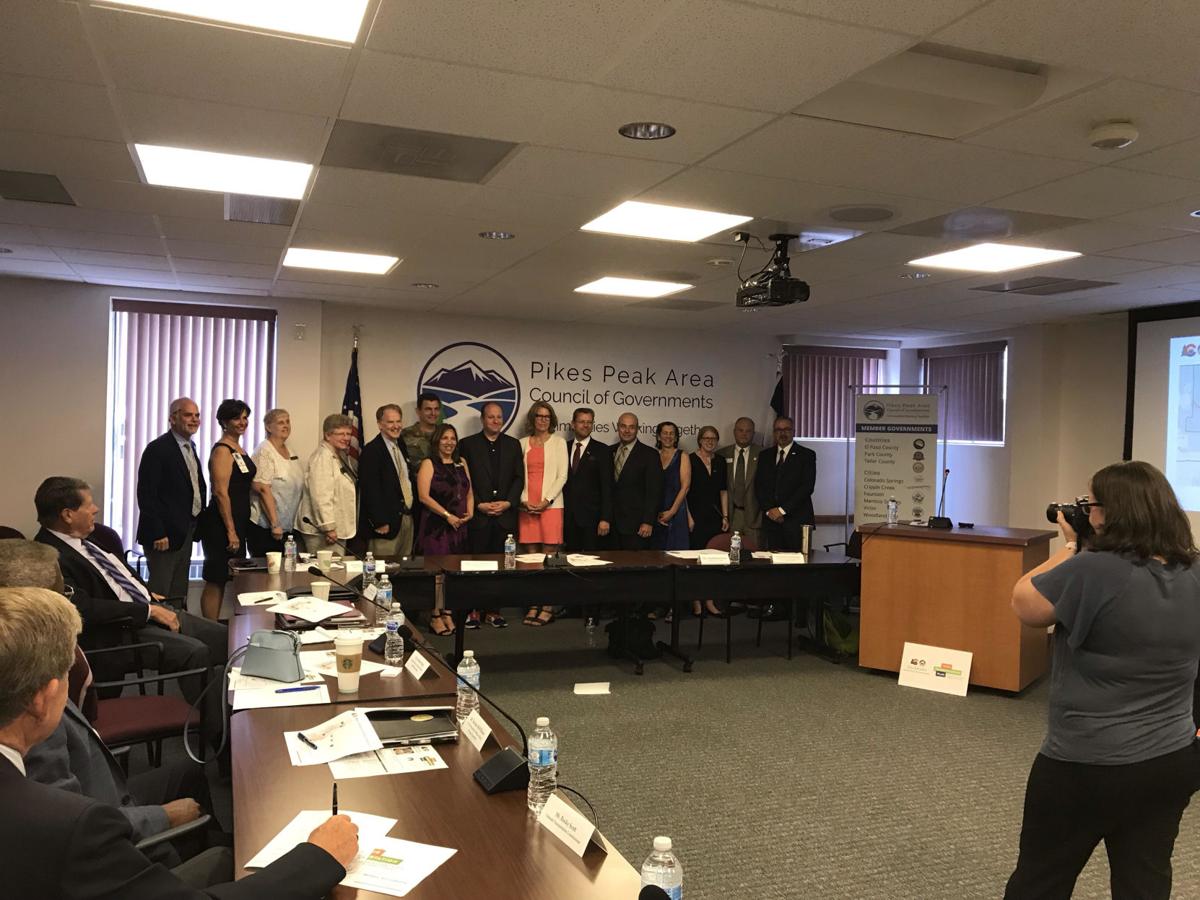 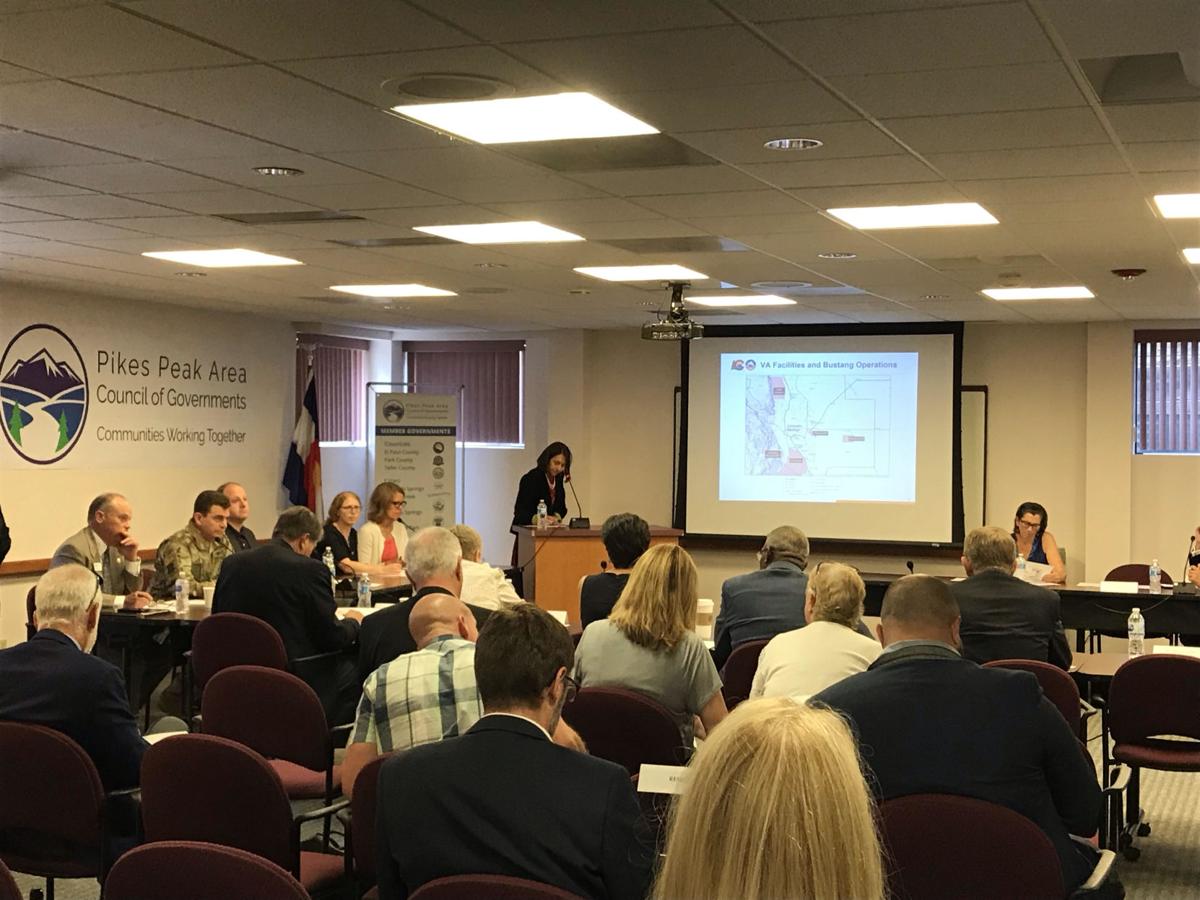 Colorado is seeking $25 million in federal funds for a series of projects that would make it easier and safer to get to military posts in the Colorado Springs area, state officials said Wednesday.

The grant from the U.S. Department of Transportation would help foot the roughly $130 million bill for improvements on Colorado 94, South Academy Boulevard, Interstate 25 and an entrance road to Fort Carson, Gov. Jared Polis told local military and community leaders during a meeting at the Pikes Peak Area Council of Governments’ 7th Street headquarters.

The majority of the money, $84 million, is expected to be spent on I-25 improvements.

“The vitality of the Pikes Peak region is a key part of Colorado’s success, and we want to make sure that our pillars in the Pikes Peak region, like our military installations, can be accessed safely and predictably, even as the civilian population continues to grow,” Polis said.

The bid for federal funding comes as state officials touring Colorado gauge transportation needs in all 64 counties. CDOT officials will return to El Paso County for a public meeting Aug. 6.

If the grant is not awarded, officials said many of the projects will be completed using $103 million committed by CDOT, El Paso County and the Pikes Peak Rural Transportation Authority.

“There is always a chance that we will not get the grant, but that does mean our commitment goes away,” said CDOT Executive Director Shoshana Lew.

• Widening of South Academy Boulevard from two lanes to three lanes between I-25 and Bradley Road.

• Capacity upgrades on about 7 miles of I-25 between South Academy Boulevard and Sante Fe Avenue, including median barriers, wider shoulders and bridge improvements.

• Reconstruction of Charter Oak Ranch Road from Santa Fe Avenue to Fort Carson’s Gate 19 and other improvements at the road’s intersection with Santa Fe Avenue, which will improve the gate’s capacity to handle the thousands of vehicles that pass through it every day.

CDOT applied on Monday for the money from U.S. DOT’s Better Utilizing Investments to Leverage Development, or BUILD, grant program.

This year, the program has made $900 million available for road, bridge, transit, port and rail projects across the country, according to a news release from the federal agency.

The $25 million requested by Colorado officials is the maximum available through the BUILD program.

Winners likely will be announced in a few months, Lew said.

Support from local governments and the military likely will give the application a competitive edge, she said.

“We know that these are projects that are important to the U.S. military,” Lew said.

The application’s emphasis on access to military installations could appeal to federal officials, but CDOT and the Pikes Peak Area Council of Governments are hopeful that the projects will improve transportation efficiency and safety for all residents.

At Wednesday’s meeting, CDOT officials presented maps showing increased congestion on the area’s major highways through 2045, which was framed as a hindrance to veterans’ mobility. El Paso County has the largest number of veterans in the state, officials said.

While no concrete plans exist to expand El Paso County’s public transit services in the near future, officials discussed the possibility of extending the state’s Bustang and Outrider bus routes in the area. Better public transit would improve access to VA facilities for the area’s 100,000 veterans and service members, officials said.

Design plans are in the works for some of the road improvement projects, including for Charter Oak Ranch Road and I-25, said CDOT Regional Transportation Director Karen Rowe. If the state wins the grant, officials are aiming to start construction in the spring and complete the projects by the end of 2022, she said.

Polis was optimistic that improved interconnectivity between the area’s military installations and increased transportation efficiency will make El Paso County a more attractive location for development.

“We think that these improvements could help also pave the way for Space Command to come here to Colorado,” Polis said.

One lane of northbound Interstate 25 will be closed from 6 p.m. Wednesday to 6 a.m. Thursday near the East Greenland Road interchange, where w…

Evan is a 2019 intern at The Gazette. He is a Colorado Springs native who is currently a student at Northwestern University.