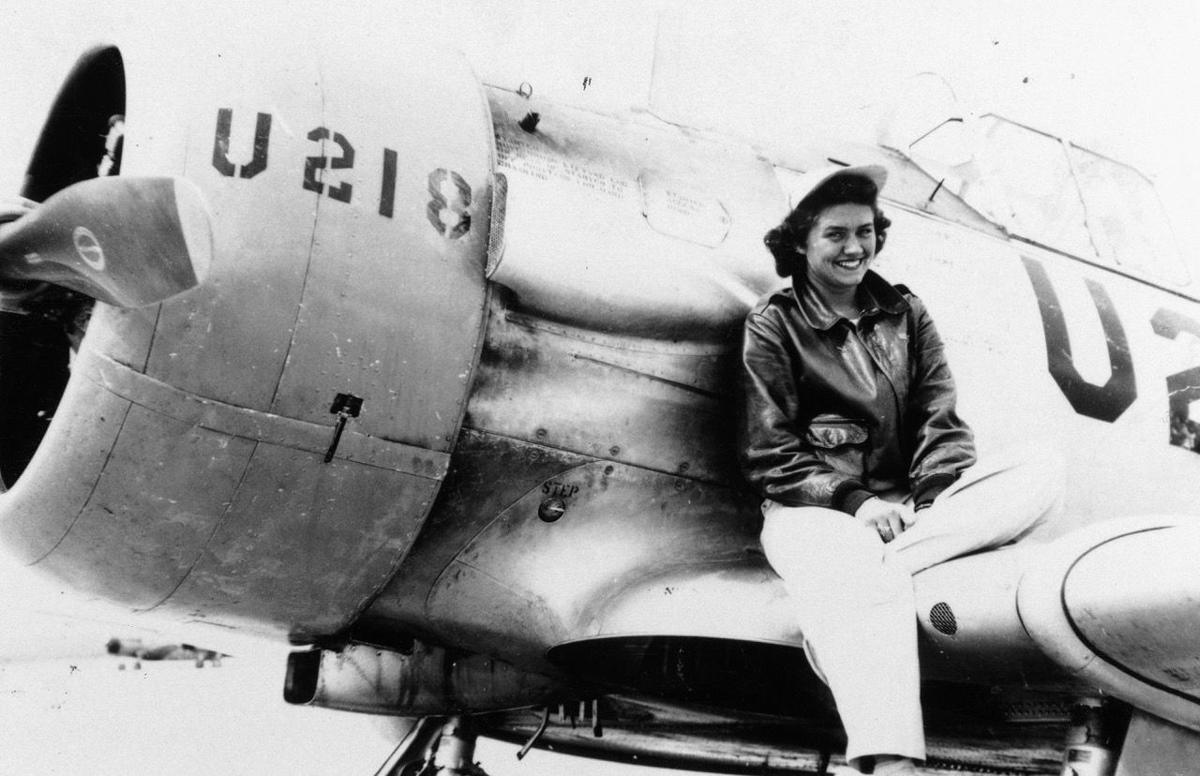 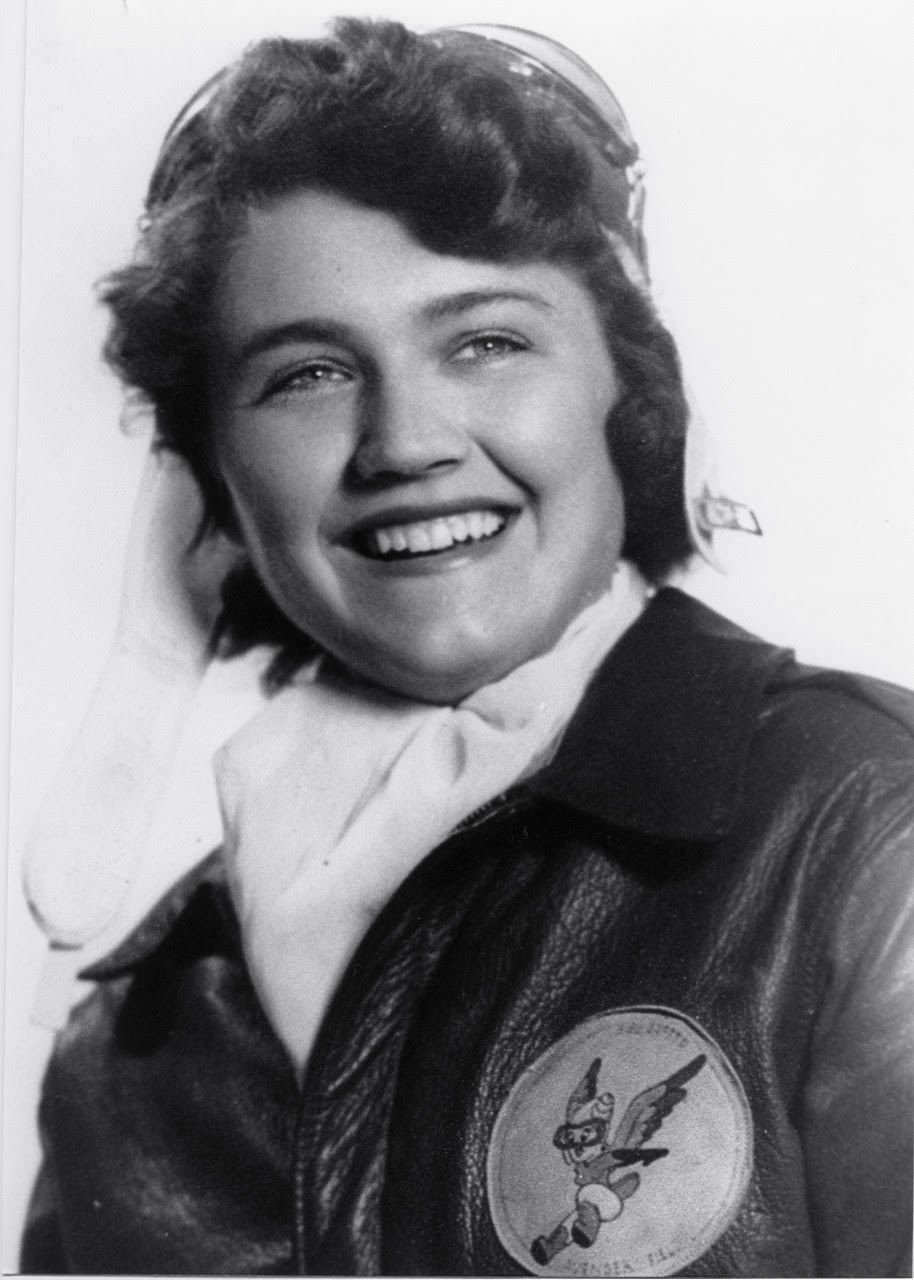 A portrait of Millicent Young taken in 1944, when she was serving as a Women Airforce Service Pilot, or WASP. The WASPs, which performed stateside chores during World War II while male pilots were training for combat and fighting overseas, are known as the first female military pilots in the United States. Photo by Army Air Corps. 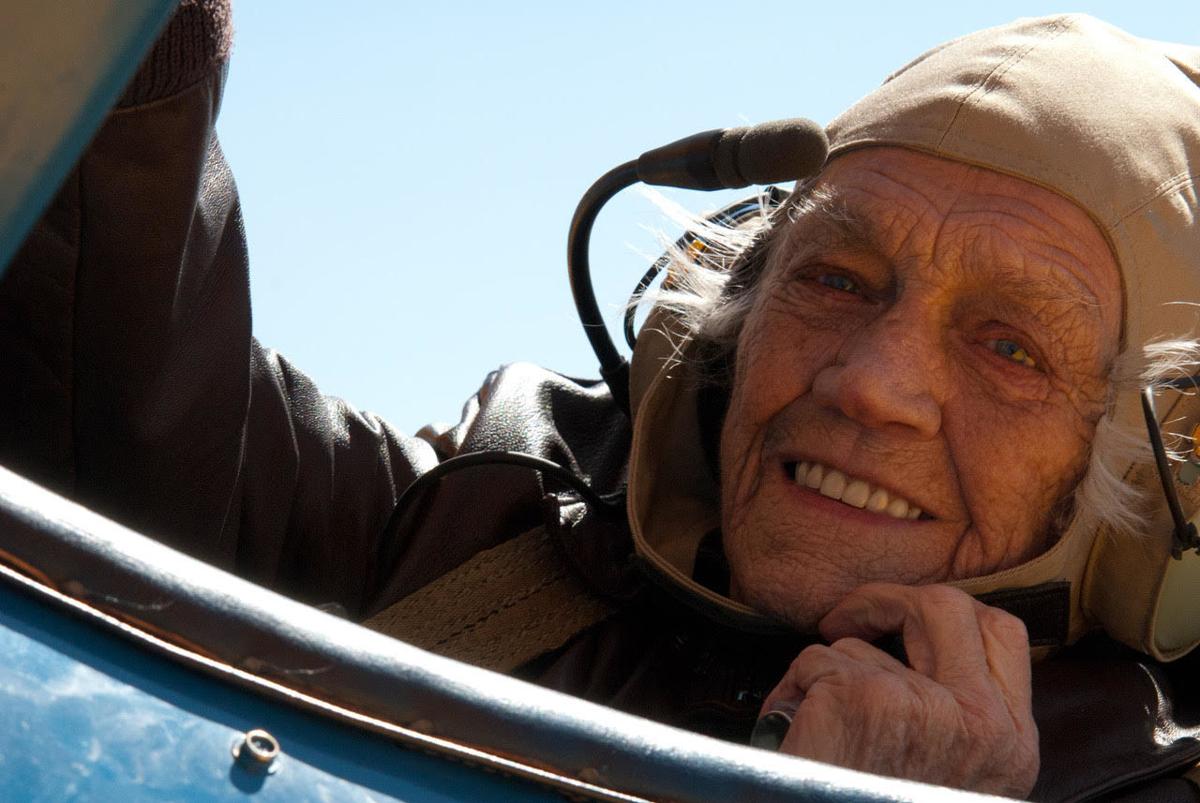 Years after serving as a Women Airforce Service Pilot, or WASP, Millicent Young takes flight. Young, who lived in Colorado Springs for more than 60 years, died on Saturday at the age of 96. Photo by Bill Young of Figurative Photo. 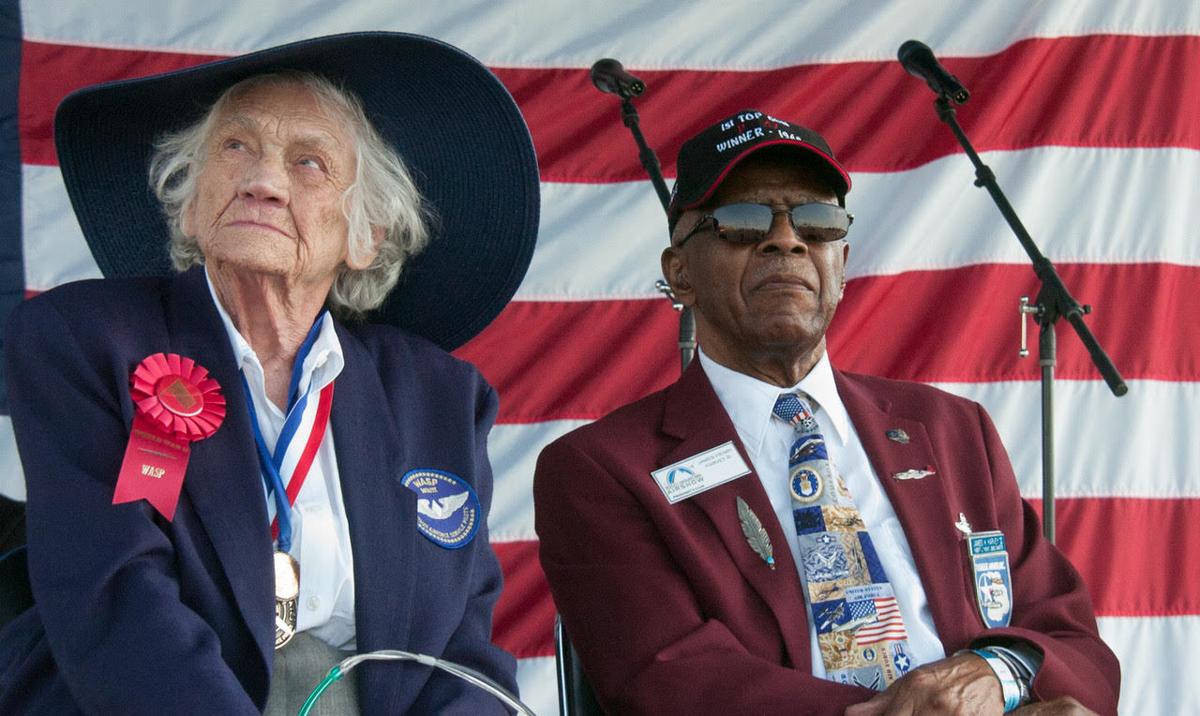 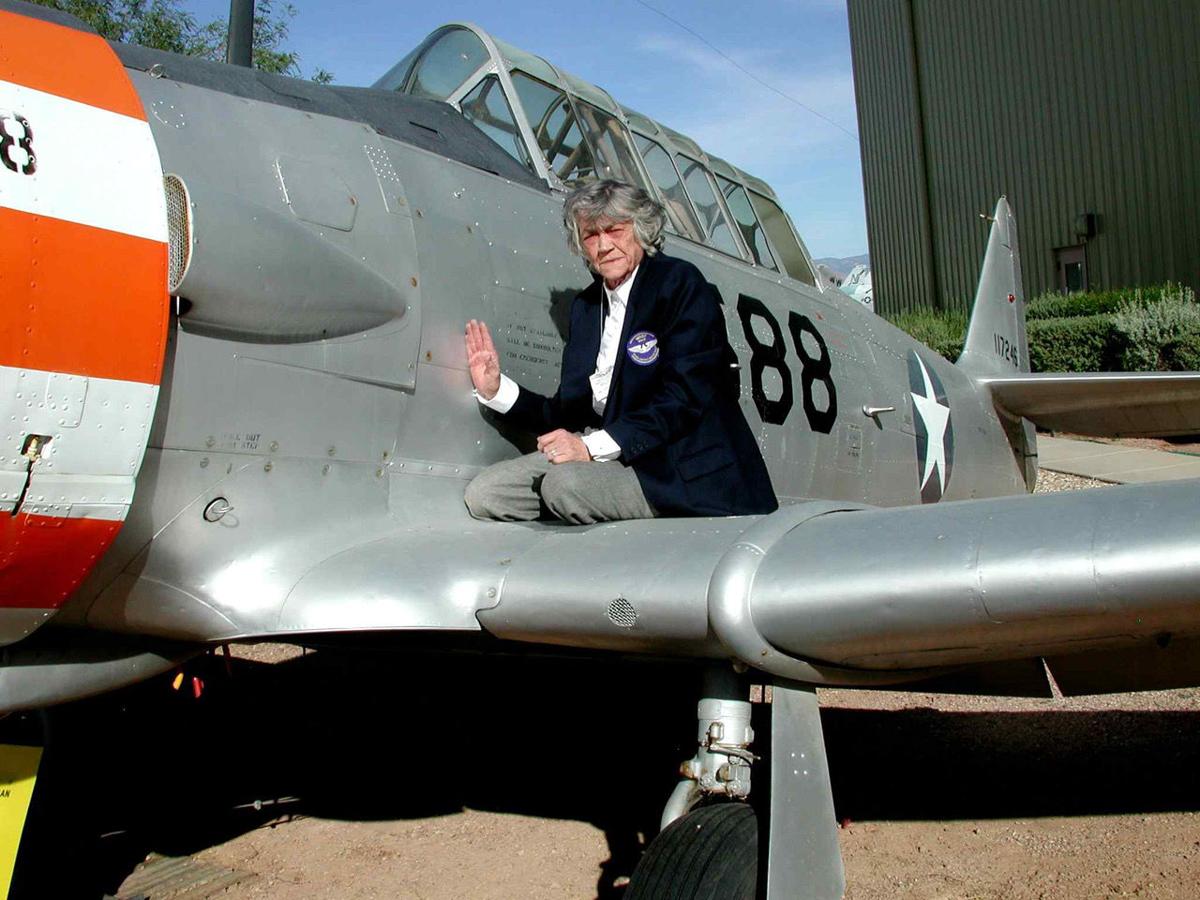 Millicent Amanda Peterson Young sitting on the wing of an AT-6, at Pima Air Museum, Tucson Arizona photo by Bill Young of Figurative Photo 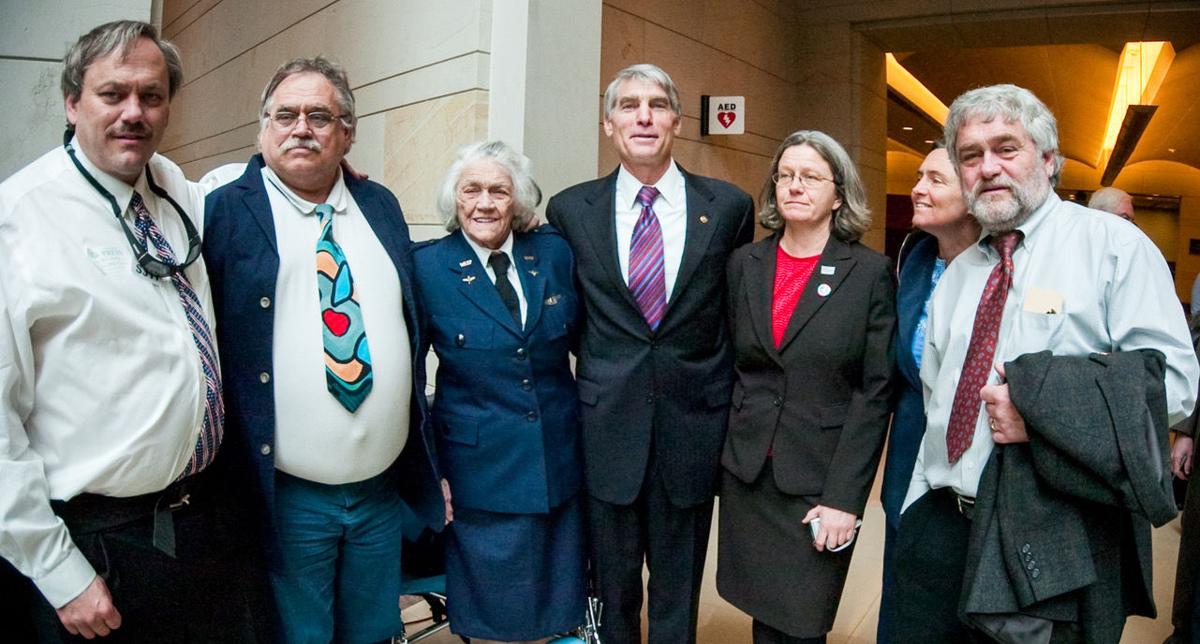 Millicent Young with her children (Bill, Steven, Martha, Amanda, and Kent) with Senator Mark Udall. Photo by Bill Young of Figurative Photo
1 of 4

Years after serving as a Women Airforce Service Pilot, or WASP, Millicent Young takes flight. Young, who lived in Colorado Springs for more than 60 years, died on Saturday at the age of 96. Photo by Bill Young of Figurative Photo.

Millicent Amanda Peterson Young sitting on the wing of an AT-6, at Pima Air Museum, Tucson Arizona photo by Bill Young of Figurative Photo

Millicent Young had dreamed of flying since she was 6, after a pilot who had landed a plane on her family’s Nebraska farm told her: “Don’t touch that plane, little girl.”

“That was the wrong thing to say to her. She went right up and started touching everything,” said her son Bill, who recalled the story after his mother’s death Saturday at age 96. “That day, she decided she was going to learn to fly.”

Young was among the first women to fly for the U.S. military during World War II. She and her fellow Women Airforce Service Pilots, or WASPs, performed stateside chores while their male counterparts were training for combat and fighting overseas.

Of about 1,000 women chosen for the job, fewer than 30 are believed to still be alive today, Bill Young said.

“They literally changed the world for women,” he said. “They opened so many doors for women.”

In 2010, Millicent Young and about 300 other living WASPs were presented the highest civilian honor given by Congress, the Congressional Gold Medal. The same award has gone to icons including George Washington, Nelson Mandela and Mother Teresa.

Young, born near Lodgepole, Neb., took her first flight when she was 14, thanks to a crop duster who was offering rides for $5. She envied the neighbor boy who got to sit beside the pilot, assuming he was granted the opportunity because of his gender, she would later tell her children.

She learned to fly in Ogallala, Neb., paying for lessons with money she earned growing wheat on land leased from neighbors. When she asked for a ride to a bus stop to get to the Nebraska city, she initially told her mother that she needed to buy clothes for school.

After being selected out of about 25,000 WASP applicants, she received her wings from Gen. Henry “Hap” Arnold, who led the Allied air campaign that toppled Hitler.

She spent a year as a female aviator in Texas before the program ended in 1944, mainly flying an AT-6 Texan, towing a target so male pilots could train in air-to-air combat, her family members said.

“She liked to say our side shot at her,” said her daughter Martha Young.

She often recounted to her children an exchange with a man refueling her aircraft in Carlsbad, N.M., who said he should be flying the plane.

“I’m the man,” he told her, according to her children’s retelling.

To which Millicent Young replied, “If you were, I would have noticed.”

After she left the service, she continued to fight to get WASPs full military status. It finally happened in 1977. She pledged to gather 1,000 signatures for that legislation, visiting bars across Colorado and Nebraska to collect them from men who often offered to buy her a drink after they had given their autograph, Martha Young said.

Young attended the University of Nebraska in Lincoln after the war, studying home economics on a scholarship from the Union-Pacific Railroad. There, she met Bill Young Sr., who was a service pilot for the Army Air Corps.

The couple had five children and, after spending some time in California and other parts of the West, moved to Colorado Springs in 1952. Her husband died in 1959.

Millicent Young worked various jobs, parking cars at the Antlers Hotel, selling encyclopedias, even penning a food column for The Gazette, then called the Gazette Telegraph. She spent more than two years working for the El Paso County Department of Human Services, being named “Working Woman of the Year” by the state in 1985.

“She accepted everybody, and she felt that community was important,” Martha Young said.

She is survived by daughters Martha and Millicent; sons Bill, Kent and Steven; four grandchildren and a great grandchild.

Her funeral will be at 2 p.m. Tuesday in Evergreen Cemetery. The family also plans a celebration of life, but the date has not been set.

George Harvey Fellows, the longest-serving city manager of Colorado Springs and a strong advocate for those with developmental disabilities, d…