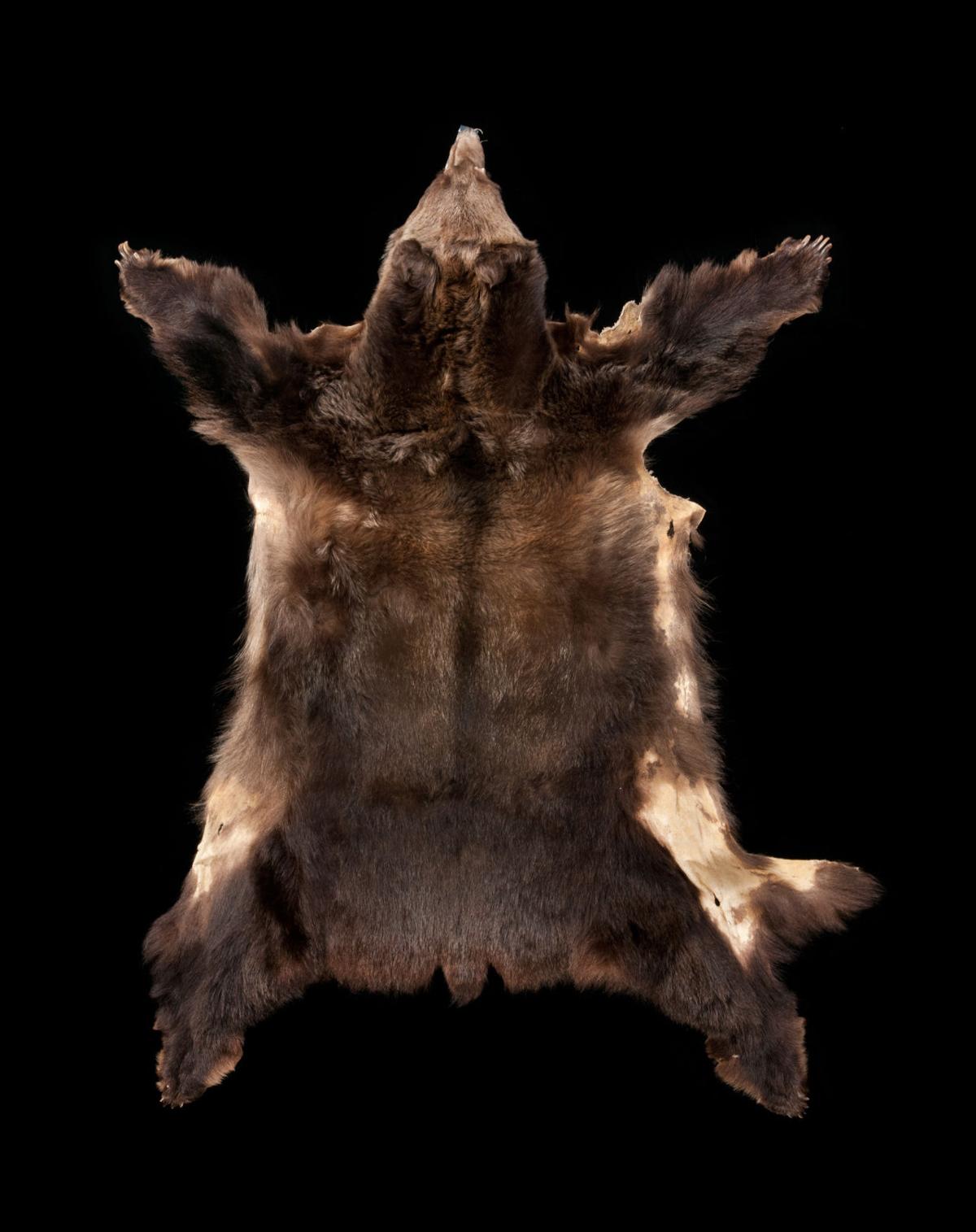 The pelt of last Grizzly known to live in Colorado. (Courtesy of Denver Museum of Nature and Science.) 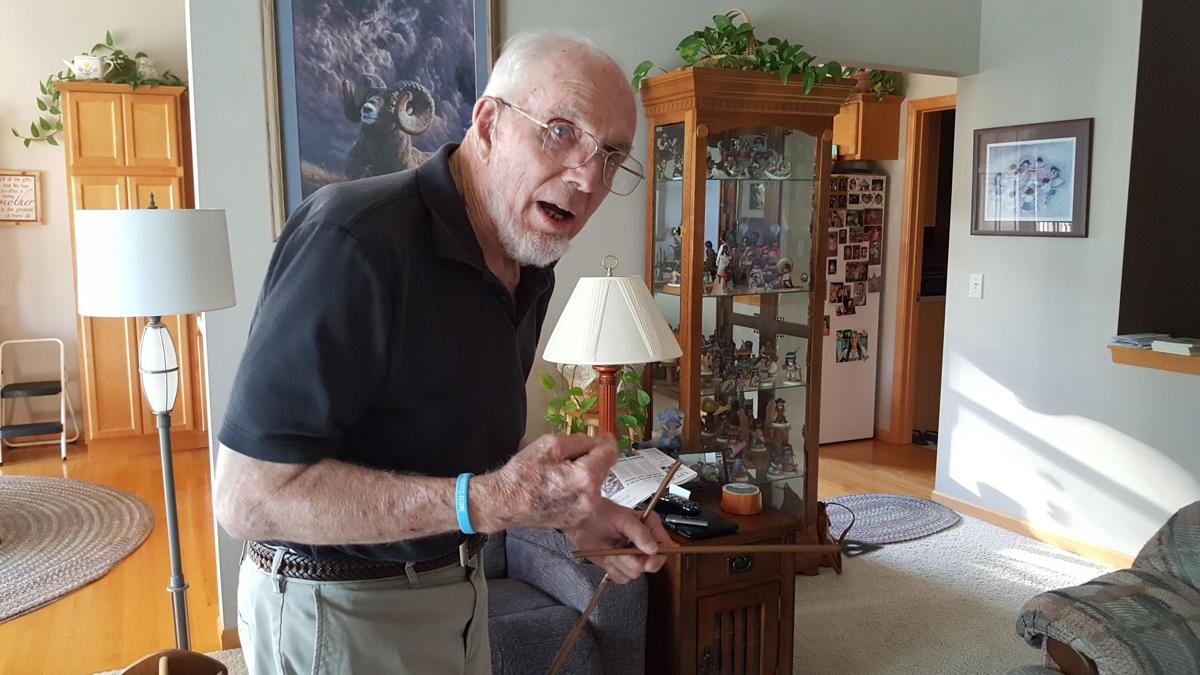 Ed Wiseman at his home in Marion, Iowa. In his left hand, he holds the arrow used to kill Colorado’s last grizzly.

Grizzly skeleton with skul of Ursus arctos horribilis, female. The last confirmed Grizzly in Colorado. (Courtesy of Denver Museum of Nature and Science.) 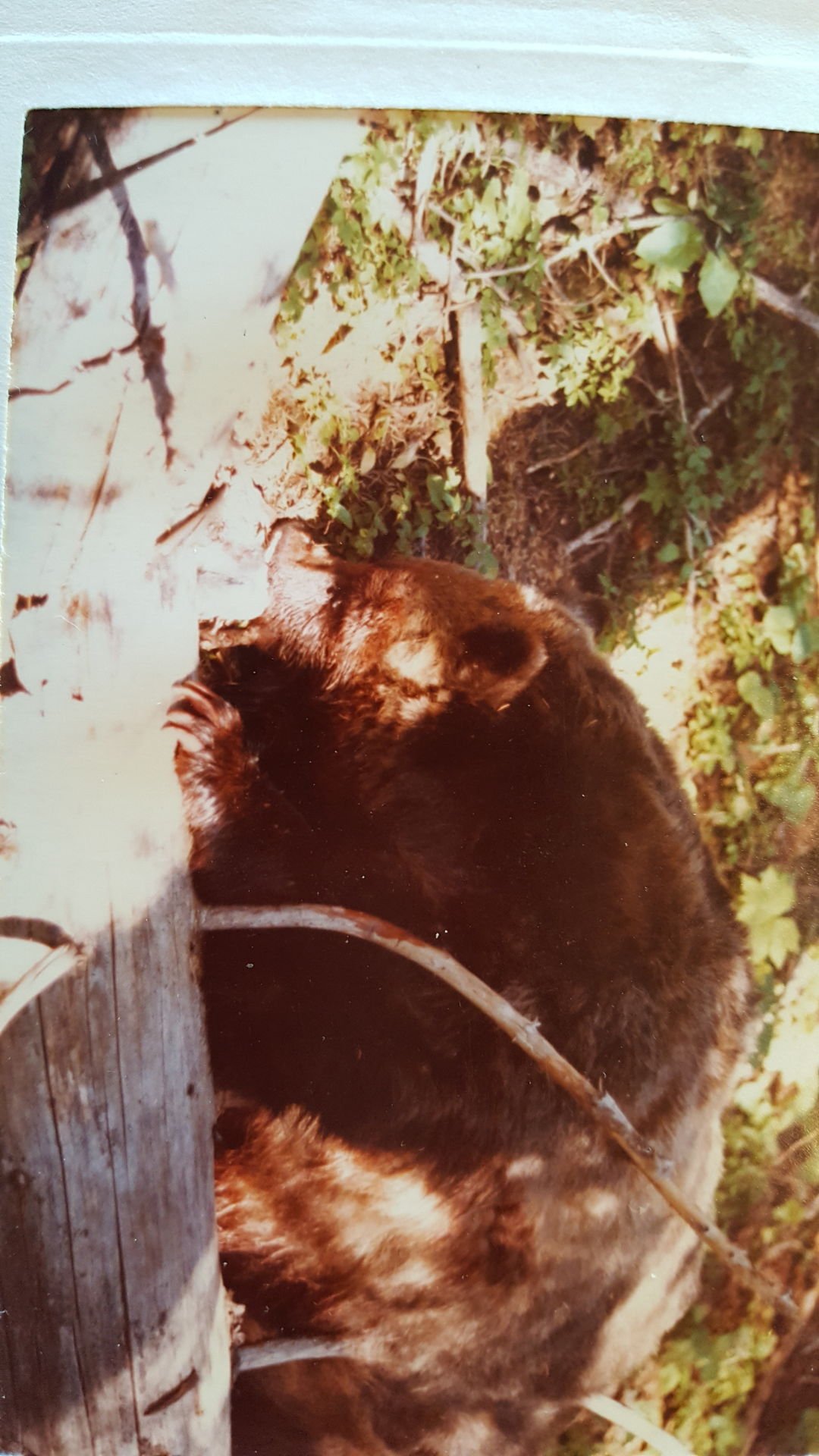 The corpse of Colorado’s last grizzly. 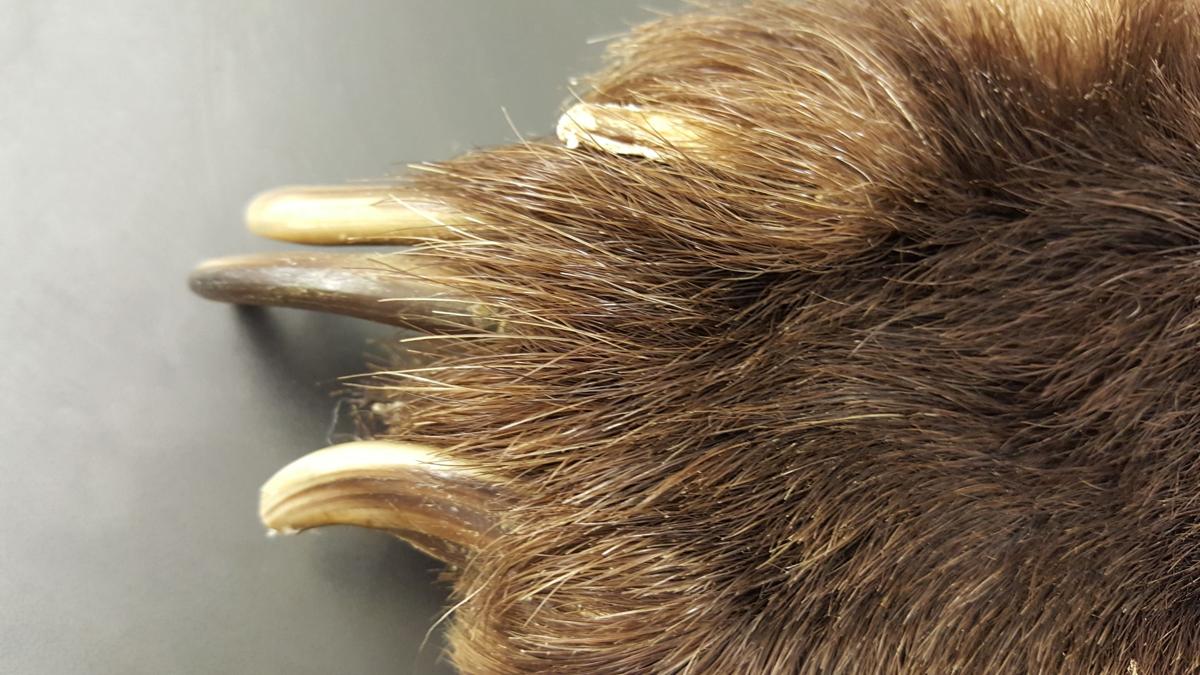 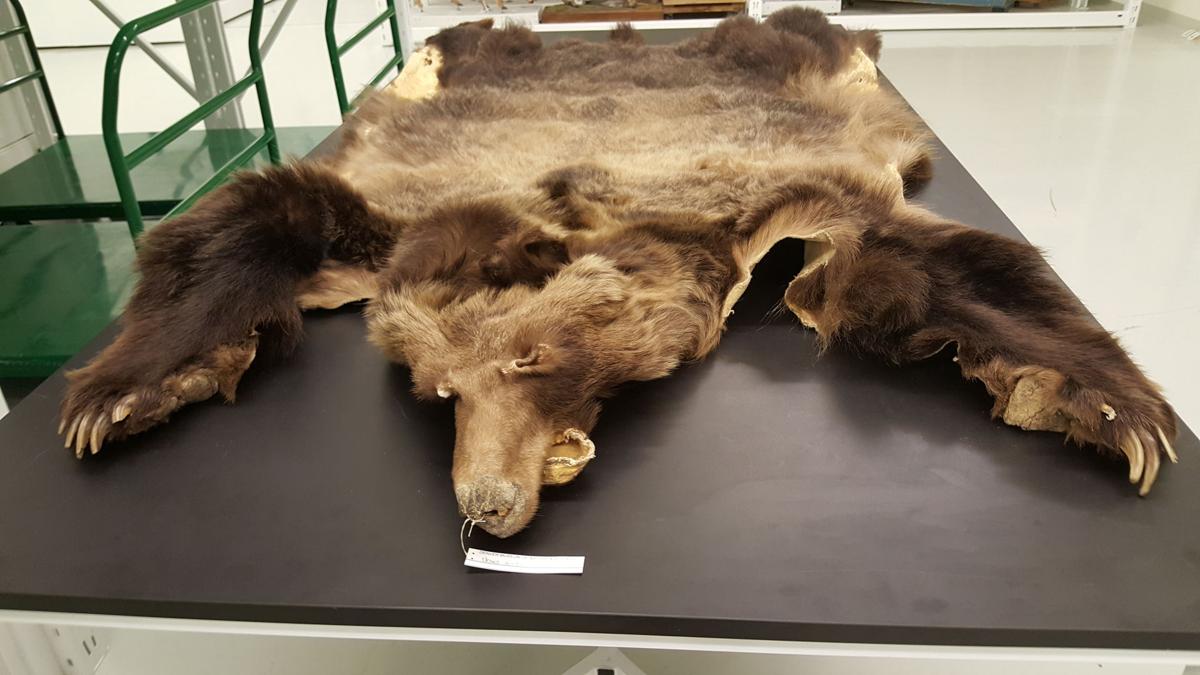 The pelt of Colorado’s last grizzly at the Denver Museum of Nature and Science.

The pelt of last Grizzly known to live in Colorado. (Courtesy of Denver Museum of Nature and Science.)

Ed Wiseman at his home in Marion, Iowa. In his left hand, he holds the arrow used to kill Colorado’s last grizzly.

Grizzly skeleton with skul of Ursus arctos horribilis, female. The last confirmed Grizzly in Colorado. (Courtesy of Denver Museum of Nature and Science.)

The corpse of Colorado’s last grizzly.

The pelt of Colorado’s last grizzly at the Denver Museum of Nature and Science.

The mystery of the lone grizzly.

It’s a bloody and heroic tale that begins on the evening of Sept. 23, 1979, 40 years ago Monday. It opens as Ed Wiseman — mountain man and native Coloradan — hunts for elk in a pine forest near the headwaters of the Navajo River in the San Juan Wilderness about 60 miles south of Del Norte.

And turns to see Colorado’s last grizzly rushing toward him. He’s surprised, which makes sense. It’s the first time a human has encountered a grizzly in Colorado since government trapper Ernie Wilkinson killed a grizzly in 1951.

First, Ed plays dead, but the 400-pound female grizzly isn’t fooled. She savagely bites his right leg and shoulder, leaving deep wounds. Ed, in severe pain, realizes he must attack his attacker. He’s a bow hunter and searches the ground for aluminum arrows he sharpened that morning.

Ed, 5-foot-10, 190 pounds, grabs hold of an arrow with his left hand and with all his strength plunges the tip into the grizzly’s neck. He strikes with such force the arrow breaks in two. His strike finds the jugular vein, and blood spurts in his face.

Still, the grizzly continues her assault. After a few seconds, Ed finds the strength for another plunge, striking the grizzly in the armpit. This blow finds her heart.

The stunned grizzly embarks on a short, slow, final walk. She falls to the ground, rests her head on her paw and stops breathing.

‘Goes with the territory’

It’s a breezy, bright evening in Marion, Iowa, and Ed sits in the living room of his spacious home. He’s 86, but still works full time, standing all day while chatting with customers in the Walmart recreation department.

“I enjoy people,” he says. “I still don’t like to sit around and do nothing and working at Walmart gives me something to do and helps pay the bills and that kind of thing.”

The broken arrow used to kill the grizzly is a few feet from his easy chair. Judy, his wife, is knitting and listening at the dinner table. The mood is light, and Ed’s voice bounces as he talks of the night a giant bear nearly killed him in the San Juan Wilderness.

“It’s a fact of life,” he says. “As far as it bothering me, as near as I can tell, it doesn’t. I lived in the woods. That’s what I did. And if you live in the mountains and you’re around wildlife and in remote country and all those things, well, you have to accept what goes with the territory.”

Ed’s body is here in Iowa, but for nearly two hours his mind returns to a night of pain and courage in southern Colorado. The past has joined us in this living room.

Ed, his right leg and shoulder a bloody mess, is on the elk hunt with 25-year-old Mike Niederee from the flatlands of Kansas. A few minutes before the attack, Mike searches for elk hundreds of yards from Ed and sees the grizzly 100 yards away, but believes it’s a common black bear. The grizzly catches Mike’s scent and hustles away, straight toward Ed.

Mike hears a scream and returns to where he left Ed. First, he sees his guide’s bloody black wool cap. He believes the grizzly has killed Ed and dragged him away.

From a few dozen yards away, Mike hears a call for help and runs to the call. It’s a jolting moment. Ed’s body is mangled, with exposed tendons and broken bones, but his mind is filled with plans for rescue. He wants Mike to ride his appaloosa horse, Freckles, back to camp, where hunters are preparing to eat supper.

In Ed’s mind, the rescue will be simple and swift. An emergency helicopter from Fort Carson in Colorado Springs will be summoned and rapidly fly to this remote location. Ed expects to be lifted to a hospital, and warmth and safety, by midnight.

“I just believed,” he says. “I first said, ‘Well, I’ll be fine until midnight, and they’ll be here by then.’ And when they didn’t get there by midnight, I said, ‘Well, it’s dark out, it’s black, they’ll be coming in at daylight and I can make it until daylight.’”

His fire goes out at 10 p.m. His thirst is intense after losing so much blood. But his faith never wavers. He’s a tough man. It’s in his blood. His father, Sherman, spent his youth as a boxer before working 42 years in the open hearth of a Pueblo steel mill. His mother, Virginia, shrugged and said fine when 16-year-old Ed told her he would be spending four nights in the Colorado mountain wilderness with friends. Fear was never allowed to enter the Wiseman home.

Has Ed been scared?

“Well, I don’t know if I’ve ever been,” he says, chuckling. “I’ve been apprehensive, I would guess.”

Ed has spent dozens of nights alone under the stars. Bloody and helpless, he tells himself this is just another one.

A little after sunrise, the copter arrives and Ed is taken to a hospital in Alamosa. By this point in the story, you’ve grown to know Ed, so what arrives next is no surprise. After a week in the hospital, he’s relatively pain free and confident full recovery is close at hand. He begins lobbying with nurses for release. He has hunts scheduled. He needs to return to empty spaces and skies filled with stars.

“I’m doing pretty good,” Ed tells himself. “I’m about to get out of here.”

That afternoon, a doctor enters his room, puts on rubber gloves and removes the surgical towel that covers Ed’s leg. The doctor’s index finger disappears in Ed’s right leg, and an ugly mixture of blood and fluid oozes from the wound.

“The vision of seeing a man’s finger totally disappear in your leg, that really upset me,” he says. “The whole world changed at that point.”

He spends another three weeks in the hospital. Doctors tell him he will require a cane to walk. They say he never will return to nights in the wild. They seek to be honest and helpful as they map the limits of Ed’s future.

Ed is not listening.

In March, he guides a lawyer on a mountain lion hunt near La Veta, and they bag one of the big cats. Nine months after the attack, Ed returns to the remote clearing where he almost died. He walks to the site without aid of a cane.

He spends the next 20 years working as a guide in the Colorado wilderness, spending carefree nights in the woods. He wanders the open spaces without worry. He sleeps soundly.

“Everything rolls off of him,” Judy says. “That’s just his way of life, which is probably a good thing.”

And so we return to the mystery. How to explain Colorado’s lone, last grizzly from 1979?

The pelt and skeleton of Colorado’s last grizzly rest in the basement of the Denver Museum of Nature and Science, and the skull is on display on the second floor, a few dozen yards away from the museum’s vast collection of dinosaur bones. A few days after the grizzly’s death, experts examined her corpse and determined she was 16-to-20 years old, suffered from arthritis and likely never delivered cubs.

But no expert can explain how a grizzly wandered, apparently alone, for more than a decade. It remains a mystery.

The grizzly is the star.

“Every time I bring people to see this bear, there are so many questions,” Demboski says. “They are just in awe of it, and the sensationalism of the story takes it to another level.”

Demboski often encounters skepticism. Museum visitors doubt a man could kill a grizzly using only an arrow and his bare hands. No way, the visitors say.

Those visitors should talk with Judy.

“He had absolutely no idea how much upper-body strength he had,” she says of her husband. “You didn’t really want to shake hands with him back then.”

Once, grizzlies roamed freely and terrified frequently as far south as Mexico. They were common in Colorado and the rest of the once wild West. A lone grizzly adorns the California state flag, and the giant bears once ruled the state. They were sometimes even seen loping along Pacific beaches. The last California grizzly was killed in 1922.

“They were driven to extinction in the United States and that was human driven and it was quick,” Demboski says.

“The fact that this one bear hung on, yes, the death is tragic but the bigger picture is the story was over a long time before this Wiseman grizzly.”

In his living room, Ed shrugs in his comfortable chair. He never worries, and never worried, during his days and nights in the Colorado wilderness. In his view, it’s next to impossible to suffer two bear assaults in one lifetime.

He worries, he says with a smile, for those who have yet to be attacked.