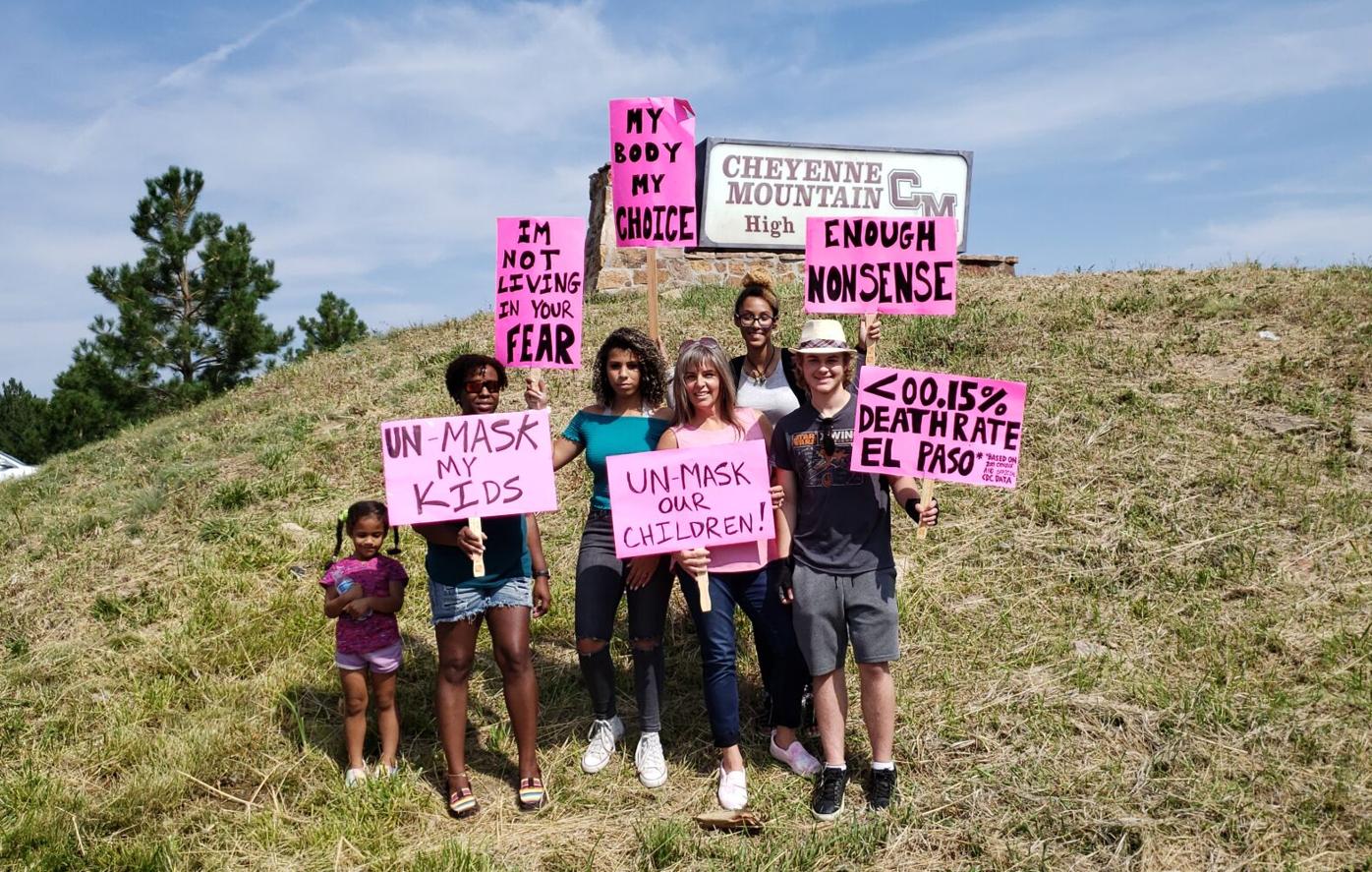 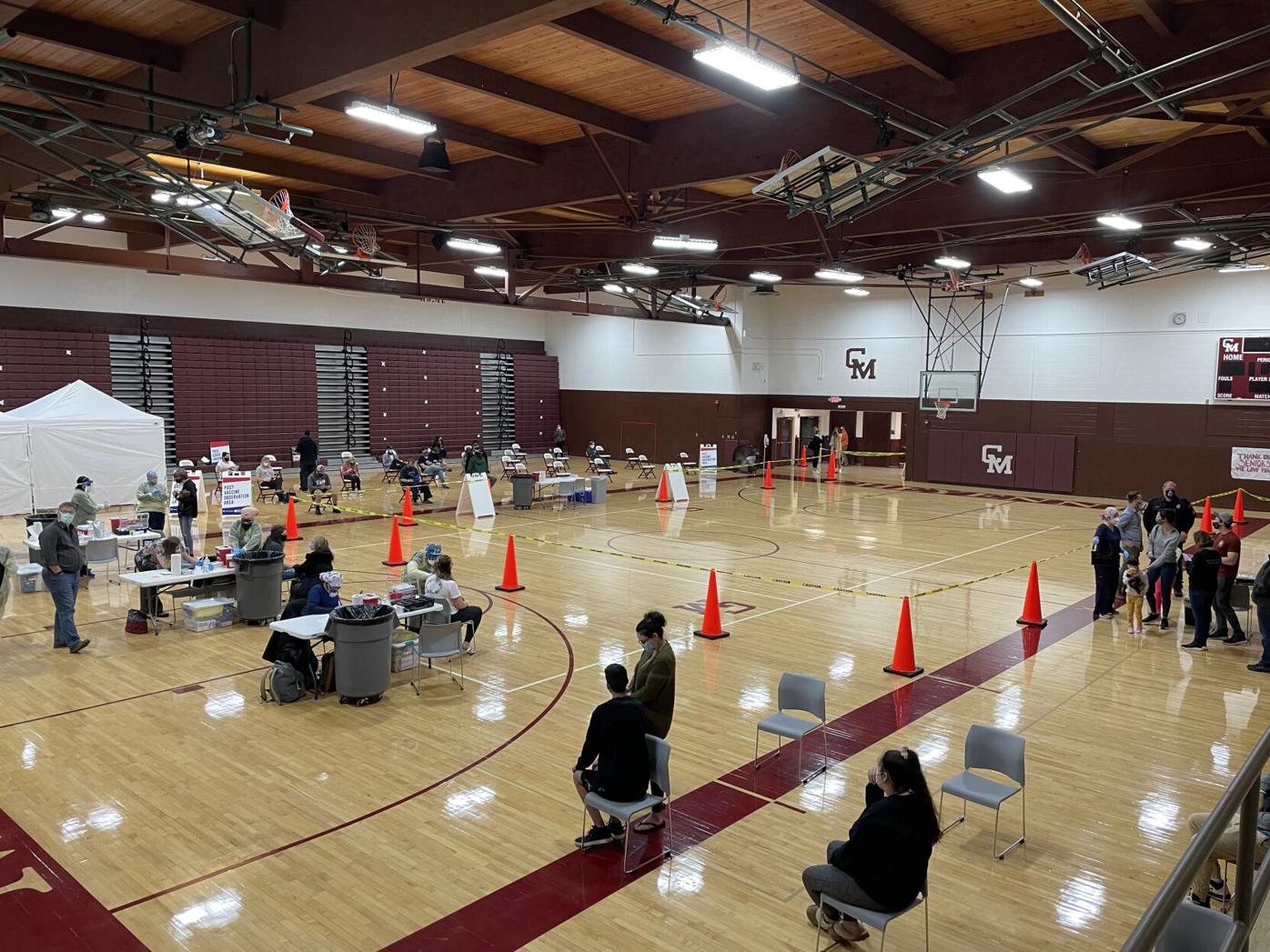 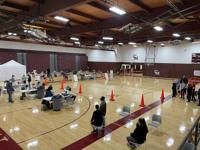 A temporarary COVID-19 vaccination clinic set up in the gym at Cheyenne Mountain High School administers doses of the Pfizer vaccine in April.

Colorado Springs police arrested and cited two after over a dozen protesters, many of them parents with their students by their side, gathered at a Colorado Springs high school Friday morning.

Shortly after, police arrested two women who were protesting near the school’s front doors.

Mary Louise Fiddler, a parent of three students enrolled at Cheyenne Mountain High, said she was one of the women arrested and cited.

Police said they made the arrests after school administration called and asked them to get the protesters off school property and onto a nearby sidewalk. School security had already asked the throng to move, but they had refused.

When police arrived and made the same request, this time threatening the protesters with trespassing charges if they didn’t leave, most of them dispersed. Fiddler and Fuchs were the only ones arrested.

“I’m here because our students are being forced into masks that are ineffective,” Fiddler, who's running for Cheyenne Mountain District 12's school board, said. “Wearing a mask is like wearing a tissue-paper seat belt that’s lined with itching powder. It really does nothing to keep you safe, but it has a negative impact.”

"They lie to these kids, and they intimidate them to getting these vaccines, and it's wrong," said Akena Mitchell, who protested at the event with three of her children. "These kids are standing behind their parents, with their parents, so that they don't get vaccinated, and they don't suffocate and have their lungs damaged wearing these stupid, pointless masks."

Sophomore Josh Fiddler, Mary’s son, said that before a recent school board meeting, he interviewed around 75 middle and high school students on how they felt about the mask mandate.

Some were indifferent to the rule, and four said they were in favor of masking up. But around 50, Josh said, wanted to see the mask mandate tossed.

“People said they sweat, it causes more acne, you can’t exercise,” Josh said, reading from interview notes from dozens of students. “’It’s counterintuitive to the vaccine, you can’t breathe, it causes headaches,’” others said.

“It makes no sense for them,” Mary said about students now being required to mask up. “Zero kids died in El Paso County from COVID.”

Since the start of the pandemic, three people between 10 and 19 have died from the virus, and no children under 10 have died.

At Coronado High School, 20-30 students also walked out of class at around 10 a.m. on Friday, citing issues they had with District 11's recent mask mandate.

School staff said the students walked out of class into a courtyard area, but ultimately went back inside without any commotion. They were supervised by campus security.

But as anger has flared up surrounding a recent wave of school district mask mandates, Colorado Springs-area schools and districts have seen new COVID-19 outbreaks and cases among their communities.

Since the start of classes Aug. 18, Lewis-Palmer School District 38 measured 30 cases of COVID-19 among its students and staff.

Six 6th-grade students were isolated as of Friday in a current outbreak, Mark Belcher said.

"We're fairly confident that the protocols are working to contain our spread," Belcher said.

Lewis-Palmer School District does not require students to wear masks but is "mask supportive" and encourages the use of masks, Belcher said.

Belcher said classes, nor extracurricular activities such as sports, were cancelled due to outbreaks of the virus.

The largest outbreak over the past two weeks was detected at Sand Creek International Elementary School, with 19 cases declared on Aug. 31.

District 20 did not provide comments about the outbreak and District 49 and District 11 did not immediately respond to requests for comment.

O'Dell Isaac contributed to this report.

Polis indicated the state plans to set up small- to mid-scale drive-thru vaccination sites in metro areas once the booster shots are authorized. Otherwise, he said, the Pfizer booster would be available through the same providers who administered the first two doses of the vaccine.