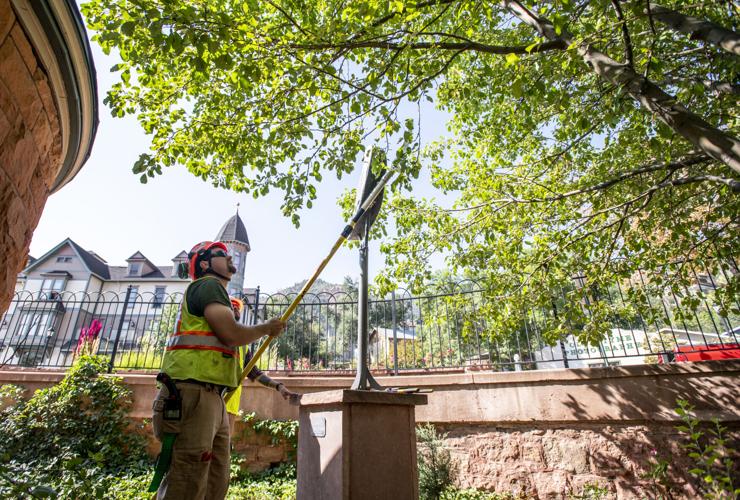 Manitou Springs City Arborist Matthew Weber trims a tree that has grown over a statue next to Shoshone Springs on Manitou Avenue on Friday, Sept. 9, 2022. (The Gazette, Parker Seibold) 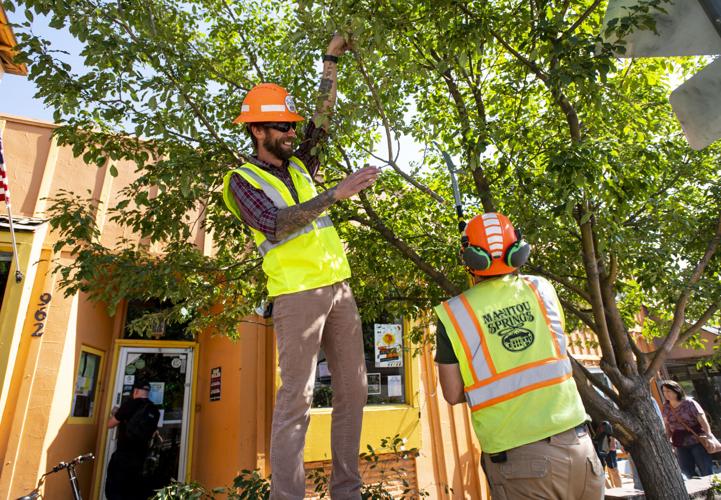 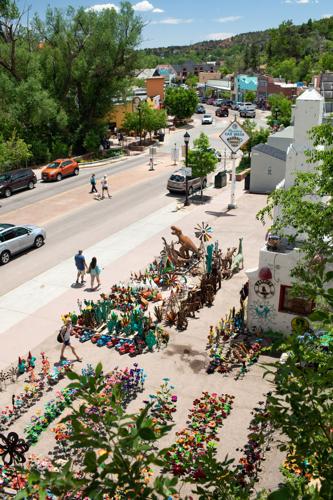 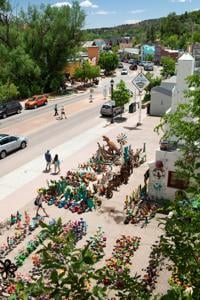 Manitou Springs is considering an ordinance that would create a heritage tree program and aim to ensure trees that must come down are replaced. file John Stembler/The Gazette 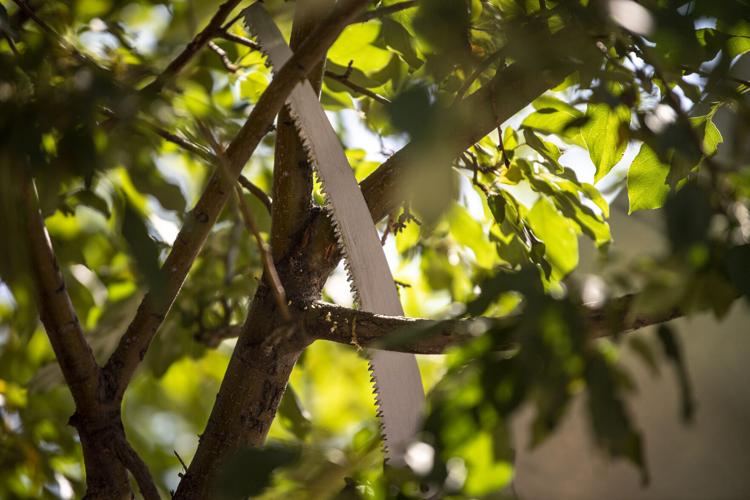 Justin Weber uses a saw to trim a branch and make way for a new seven-foot-tall statue on Manitou Avenue on Friday, Sept. 9, 2022. (The Gazette, Parker Seibold)

Manitou Springs City Arborist Matthew Weber trims a tree that has grown over a statue next to Shoshone Springs on Manitou Avenue on Friday, Sept. 9, 2022. (The Gazette, Parker Seibold)

Justin Weber uses a saw to trim a branch and make way for a new seven-foot-tall statue on Manitou Avenue on Friday, Sept. 9, 2022. (The Gazette, Parker Seibold)

The Manitou Springs City Council approved a local law this week to recognize heritage trees and protect the leafy green canopy that keeps the community cooler in the summer.

The council passed the ordinance 7-0 marking a major milestone in several years of work by community advocates, said Skyler Beck, head of the newly formed parks and recreation department. His department took over parks maintenance from public works.

"One of the needs we have is to really build up our forestry program and give our trees a little more attention," he said, although he noted overall the canopy is healthy.

The ordinance is now headed for a second vote of the council, scheduled Sept. 20, when public comment also will be taken. Once adopted it will help emphasize "the value of trees at a time when the canopy is totally changing," City Gardener Mary Ellen Montgomery said.

Windstorms and snowstorms have battered many trees and drought conditions have left many trees across the region partially dead. As more residents have transitioned from high-water use lawns, some trees that grew up near irrigation are stressed as well, Montgomery said.

It's important to protect and diversify the canopy because trees are key in keeping streets and sidewalks cooler; such paved spaces can contribute to the urban heat island effect. Trees can also keep stormwater runoff cleaner because their roots provide a natural filtration system, Montgomery said.

The new ordinance lays out a plan for residents to nominate heritage trees that may have a distinctive size, shape or location, a prominent place in town, historical significance to a person, place or event, among other qualities, according to the ordinance.

"More than anything it highlights the importance of keeping trees and maintaining them," he said of the heritage program.

In 2017, the city of Manitou Springs took down five elms that were infested with an insect known as the European elm scale, a decision that prompted protests. Residents held signs, wrapped yellow and green streamers around the trees, and shouted at Asplundh Tree Expert Co. workers to "go home please," The Gazette reported at the time.

Pruning by Colorado Springs Utilities to keep branches away from power lines "compromised" the trees, Manitou's arborist at the time said.

The new ordinance prohibits any person, firm or corporation from "topping" a tree, or drastically removing branches of trees. It also emphasizes pruning to preserve trees rather than taking them down.

Pruning often requires more skill and it can sometimes be cheaper to take trees down, so the new ordinance is intended to help prevent compulsive and destructive decisions around trees, Montgomery said.

"We wanted to have some checks and balances in place," she said.

The city's goal of net zero tree loss was first adopted by resolution in 2019, and it was included in the new ordinance as well.

"We want to make sure in the next 10 to 20 years when we start losing the big, big trees we have some younger ones that can start growing up," Beck said.

Editor's note: This story was updated with the date for the second reading of the ordinance.

The last time voters were asked to cut the state income tax, there was little spending by both sides of the ballot question, which Coloradans approved by a wide margin.