The Manitou Springs City Council on Tuesday is set to consider reopening the Manitou Incline through a free reservation system that would limit the number of hikers allowed on the popular trail.

The council has been here before.

"It's as Yogi Berra said: 'It's deja vu all over again,'" said Bill Beagle, president of Incline Friends, the nonprofit steward of the famous railroad ties that ascend 2,000 feet up the mountain. "This could've been done over a month ago."

Representing the land-owning agency that was granted Incline management control in a 2011 intergovernmental agreement, Colorado Springs parks director Karen Palus laid out a detailed plan for no-charge bookings to local leaders in a Zoom meeting June 11.

Since then, council members have discussed the Incline in closed, executive sessions under the basis of "negotiations." Also, staffers from the two cities have been meeting privately.

Now comes the Manitou staff-recommended memorandum of understanding to reopen the Incline.

"I'm hoping we're more on board, I'm hoping there'd be some alignment," mayor John Graham said of council. "But I would say it's premature for me to say it's gonna be accepted completely." 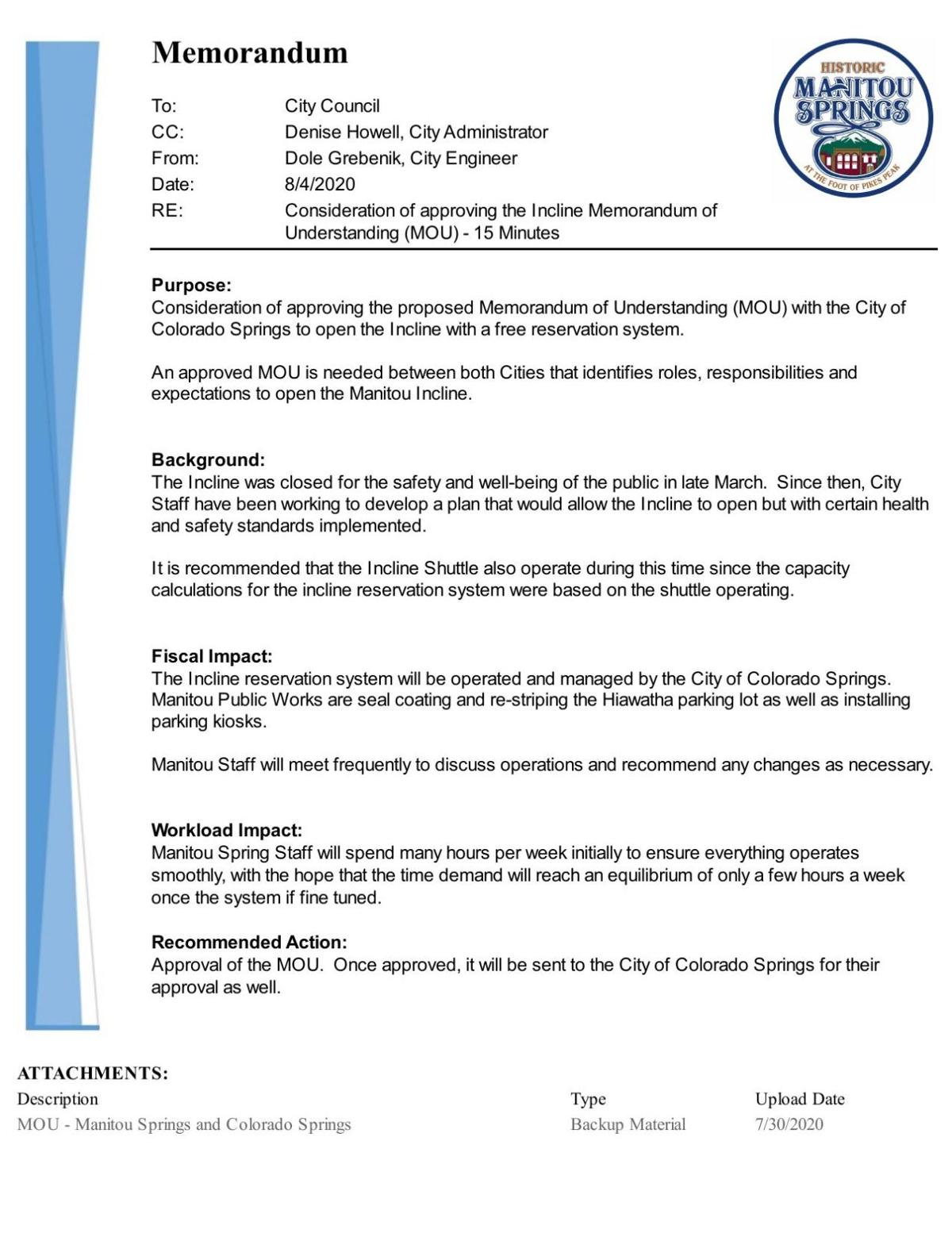 For the first two weeks of operation, reservations made online would be limited to 35 people every 30 minutes between 6 a.m. and 6 p.m. After the first two weeks, that number could go up to 45, outlines the memorandum, which requires signatures by Graham and Colorado Springs mayor John Suthers.

Upon consent of both cities, the understanding states hiker numbers could be altered depending on the availability of parking at Hiawatha Gardens, the lot in downtown Manitou Springs, and at Iron Springs Chateau, the private business selling spots close to the Incline's base.

In a memo to councilors, Manitou staff also recommends the free shuttle — shut down by COVID-19 concerns — resume running from Hiawatha Gardens "since the capacity calculations for the Incline reservation system were based on the shuttle operating." The parking lot was being resealed and restriped this week.

The proposal reads: "It is the intent of the Parties that the reservation system limit access to the number of people that can be reasonably served by the available parking at Hiawatha Gardens and the Iron Springs Chateau."

A new kiosk at Hiawatha Gardens is also mentioned. Asked if this meant a fee coming to the lot, Graham said, "It's certainly an idea that's been kicked around."

He said the kiosk could just as well print receipts at no charge to serve as the "proof of parking" required under the proposed agreement. That's unless hikers show up on foot or bike, it states.

If not at Hiawatha Gardens, it calls for proof of parking at Iron Springs Chateau. The business, long seen by Incline opponents as a point of controversy inviting more traffic on the residential Ruxton Avenue, "is the beast I don't think we've really thought through sufficiently," Graham said.

Chateau owners declined comment for this story. The one overseeing the parking enterprise, Brian Ratterree, "would have to cooperate with us maybe more than he's historically shown," Graham said.

"I don't think we have to hold up the memorandum of understanding because of it," the mayor added, "but there's a bit of unfinished business I think we need to address."

Rather than drive up Ruxton, officials for years have tried to direct Incline seekers to Hiawatha Gardens, where Graham said there is 130 spots. And with other tourists occupying those, "I've got serious reservations on whether that's gonna be sufficient," he said.

That's a concern of Beagle as well. Another was what he predicted to be an unintended consequence of the limited reservations.

Early morning time slots would go fast, Beagle figured. "So now you're forcing people into the heat of the day and running the risk of heat stroke and creating the situation (Incline critics) complain regularly about, which is having to call out first responders."

Hikers would be given wristbands and be advised to wear them throughout their time on the Incline. Under the agreement, the city of Colorado Springs would provide enforcement with "Incline attendants" and possibly El Paso County Sheriff's deputies.

Five attendants, seasonal employees, have been hired and are ready to go, along with the reservation website, Palus said. "We're ready. We've been ready for weeks now."

The deal states Manitou would be able to issue trespassing citations to anyone using the Incline without a reservation or during hours when the Incline is closed.

Beagle wondered about fitness fanatics who do multiple laps on the stairs. He wondered how feasible it would be for someone to make a reservation on a whim — if regulars would be able to freely enjoy the Incline as they always have. It has yet to be seen if enforcement would be stationed at the halfway point of the climb, where people can enter from Barr Trail.

But despite questions, "it's good to be trying out ideas after all these years kicking the can around," Beagle said. "Get something in place, see what works and what doesn't work. You can't make everybody happy. It's just impossible."

The reservations would remain for as long as Manitou's COVID-19 emergency declaration remains. That was ordered March 17.

The city of Colorado Springs is paying for Incline attendants with pandemic-related federal relief money.

"As long as this is during the pandemic, we're prepared" to continue the reservation system, Palus said. "But once that's over, we'd have to decide one, whether it's necessary, and two, whether it makes sense and has worked as potentially intended. I think it's too early to tell on any of that."

Trail Talk: Being inclined to cooperate could save key trails around Colorado Springs

The city of Manitou Springs closed the Incline under an emergency declaration on March 18. As I write this column, it has been exactly four months.