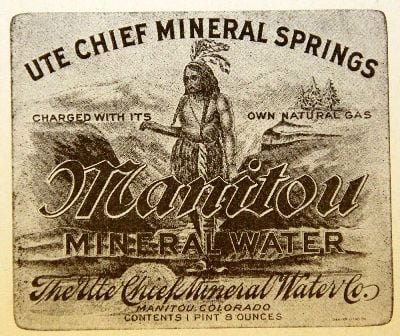 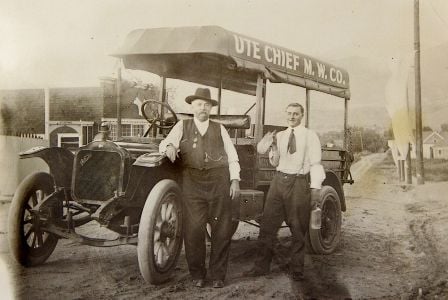 Ute Chief Mineral Water Co. truck, circa 1910. The man on the right looks like he's ready to take a swig! Photo by Manitou Springs Historical Center 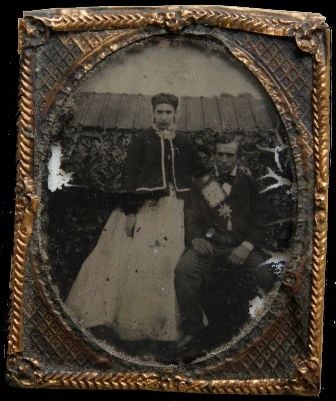 Ute Chief Mineral Water Co. truck, circa 1910. The man on the right looks like he's ready to take a swig! Photo by Manitou Springs Historical Center

If the plant were open, bottles of Manitou spring water would be for sale in local stores. And they are not. So it must be closed.

The brick building at the west end of Manitou Springs has been deteriorating for years. The doors are locked. The spring that once trickled out front is stopped up.

But if it is closed, why is there a light in an upstairs office? Why do trucks occasionally pull up to the loading dock?

“It is the great mystery of Manitou Springs,” said Dave Wolverton, president of Manitou’s Mineral Springs Foundation, a local nonprofit that works to share the history of the springs and keep them flowing. “A lot of people rightly wonder what is going on over there.”

The answer is bizarre.

For almost a decade the plant has been owned by a Korean pharmacist living in New York City who hatched a plan to make millions shipping local mineral water to the other side of the planet.

Details of the plan — the players, the money, and how it all fell apart, leaving the historic plant in near paralysis — became public as part of a lawsuit settled in December in U.S. District Court in New York.

It all started in 2003, when O Yoon Kwon, who had long owned a successful pharmacy in New York City’s Koreatown, decided he wanted to sell mineral water.

“He is very interested in natural medicines; the minerals in the water, very healthy,” said Namin Jhon, a Korean immigrant who became Kwon’s bottling plant manager.

Kwon began searching towns with “springs” in the name, Jhon said, looking for the perfect water source, and stumbled across the empty bottle works of the Ute Chief.

The Chief is one of the relics of Manitou’s halcyon era as a Victorian health resort.

Almost as soon as pleasure seekers arrived in the 1870s, they began bottling and selling the naturally fizzy water, which is laced with such trace metals as magnesium, manganese and lithium.

People drank it for refreshment and to try to cure everything from dyspepsia to depression.

By the 1890s the Manitou Springs Mineral Water Co. was shipping millions of quarts of water and “Ginger Champagne” to customers across the country. Bottles could be uncorked at the World’s Columbia Exposition in Chicago and at tony New York supper clubs.

See a slide show that reveals the intricate designs of the bottles and their labels over the years.

The Ute Chief bottling plant opened in 1893 to cash in on the growing demand for the water. It had its only successful run under Jacob Schueler, a German immigrant who also helped start the Coors Brewery. His family owned the Ute Chief from 1897 to 1944, turning out not just water, but naturally carbonated cola, lime soda and ginger ale.

The plant burned down in 1944, just as the Schuelers were selling the business. The new owners rebuilt the plant adding modern machinery capable of bottling 960 cases per day in 1945, but in the coming years beverage giants like Coca-Cola and Pepsi took over much of the Ute’s market. The plant went in and out of business several times; attempts to revive the business always ended in debt and failure.

Like settlers a century before, Kwon planned to sell the water as a natural cure-all.

“I’ve been looking around the world for this kind of water since 1984,” Kwon told The Gazette that year in a telephone interview from his pharmacy. “This isn’t going to be just for drinking. This is going to be for the good of your health.”

He also bought the nearby Shady Dell Motel for $500,000, which includes the largest spring in Manitou.

Kwon planned to sell the water in Korea, which has a strong tradition of using natural medicines.

He banked on the fact the United States imports far more from Asia than it exports, and many of the ships that arrive in North America laden with goods return almost empty. Shipping rates on those returning ships can be dirt cheap.

Soon, however, the venture ran into trouble.

In 2004, shortly after Kwon bought the spring, he was introduced to South Korean cosmetics giant Hyun-Song Kang, according to court documents from a lawsuit filed against Kwon in 2007.

Kang’s company, Hwajin Cosmetics, employed a door-to-door sales force of 75,000 — the Korean equivalent of an army of Avon ladies.

Kwon convinced Kang that Manitou water was “like no other water in the world,” according to court documents, and had broad-reaching health benefits.

Kang decided he not only could sell his customers on the healing qualities of Manitou water, but could do so at an enormous profit. He offered to buy a million bottles of mineral water per year for $1 each, according to the lawsuit. His sales army would sell each bottle for $15.

His company told the court it eventually hoped to capture a fifth of the Korean bottled water market, worth an estimated $350 million.

Kang and Kwon signed a contract in late 2005 stating Kang would pay $1.5 million for distribution rights and the first year of water.

In 2006 truckloads of water — at least 307,000 bottles — started shipping from the reinvigorated plant.

But that wasn’t the only problem.

In Korea, the $15 water was not selling well, perhaps because other bottles could be had for about 80 cents. The sales force gave away more than half the 307,000 bottles. Court records state there is no evidence they sold the rest.

Still, in early 2007 Kang’s company ordered 133,000 more bottles. The bottling plant had shut down to add a second bottling line and could not fill the order. Kang sued in U.S. District Court for breach of contract, seeking damages of $62 million.

Kang tried to get an injunction in an attempt to keep the plant from selling any water and investigated buying other springs in town to create a supply of his own. He eventually abandoned both maneuvers.

Without Kang’s business, however, the bottling plant screeched to a halt, selling only a few thousand bottles of Manitou Mineral Water in Asian supermarkets in the United States.

In 2009 the plant shipped a few thousand bottles of water to Chile in an effort to find a new market, but it did not sell well. Efforts to market it locally also flopped.

“Most Americans don’t like the Manitou spring water very much. They find it too minerally,” said local author and historian Deborah Harrison, who leads tasting tours of the springs. According to a 2003 analysis, the Ute Chief’s water has about twice the mineral content of San Pellegrino and four times the mineral content of Perrier.

In November, after a week-long trial, Manitou Mineral Water prevailed in court. The judge said Kwon was not responsible for the missing $500,000 and the delivery delays had not breached the contract. But the legal battle ate up much of the money that might have been spent on marketing the water and maintaining the bottling plant.

The bottling plant appears to be limping along. There is no money to fix a broken refrigerator. When pipes for the Ute Chief spring outside started leaking, the staff just shut it down.

The modern bottling machinery rarely runs. The two full-time employees have little to do but wait.

“It’s kind of sad we can’t keep things up,” said Brett McClintock, who runs the bottling line. “It makes no sense to have all this great water here and do nothing with it.”

Jhon said there was talk of selling the plant in 2010, but the deal broke down.

Selling the water in other cities and countries “would be good for Manitou,” he said. “The label with the name of the town going out all over the place. But right now we just wait.”

Reached in New York, Kwon’s wife, Chong Nam Kwon, said her husband, 75, is very sick and could not answer questions.

“Manitou is slow now but water business is slow all over the world,” she said.

She said her husband has no plans to sell the plant or expand production. He still believes in the healing qualities of the water and wants to develop a market.

“At this time nothing is changing. I think the future will be very good,” she said.