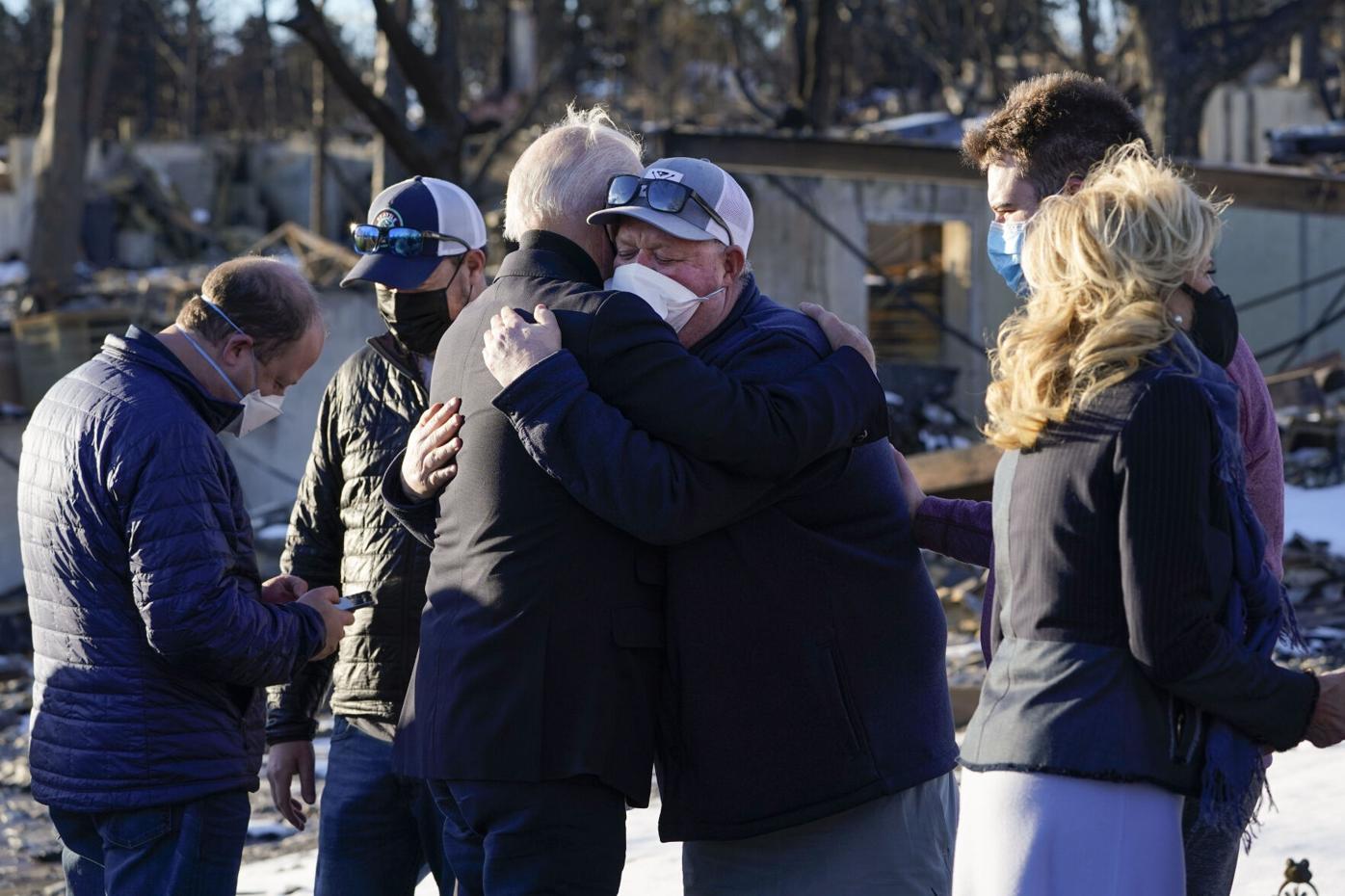 President Joe Biden on Friday gives a hug to a person affected by this past month’s winter wildfire as he tours an area hit hard by the Marshall fire in Louisville. Biden and first lady Jill Biden toured the areas where more than 1,000 structures were destroyed. 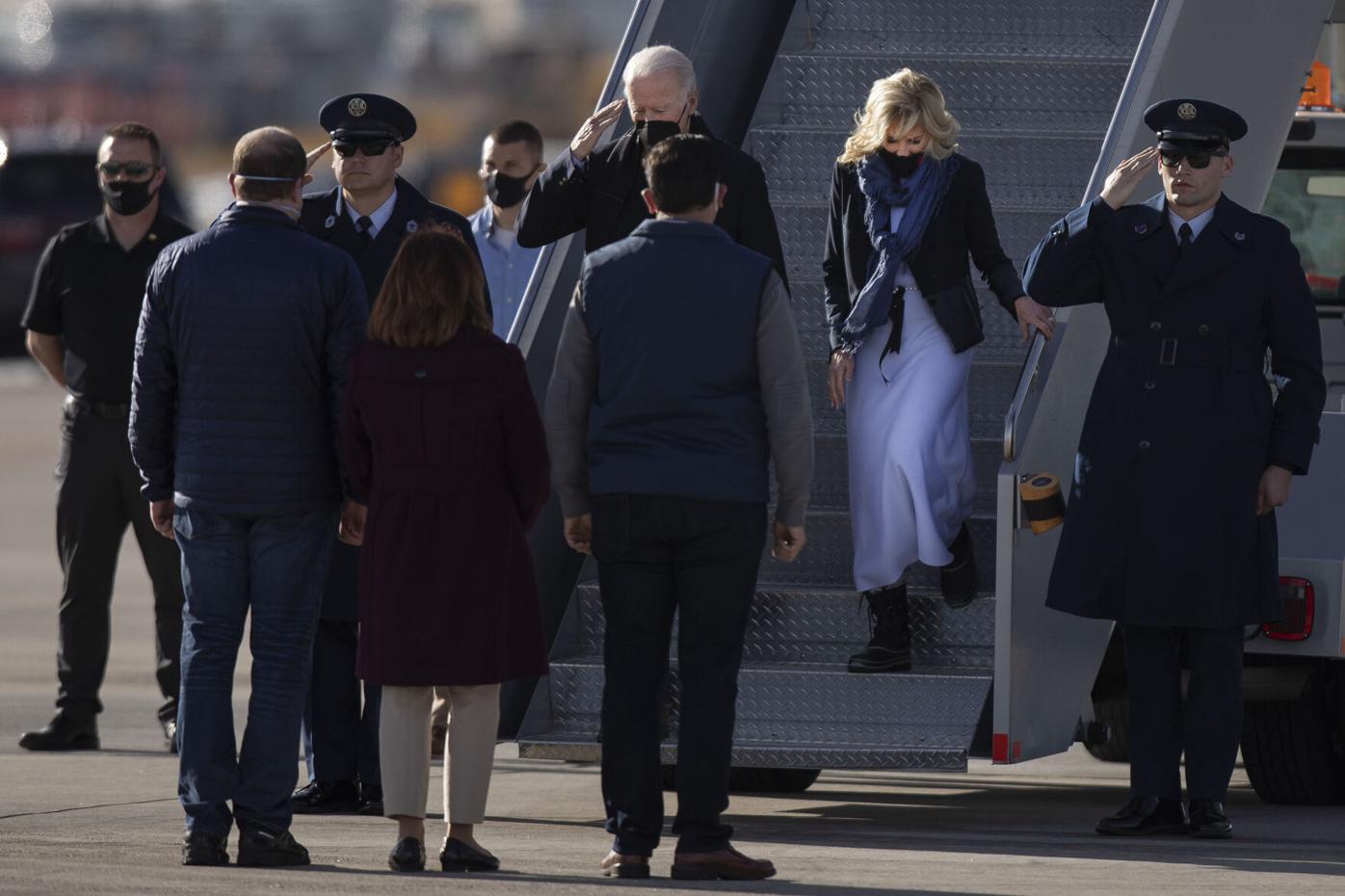 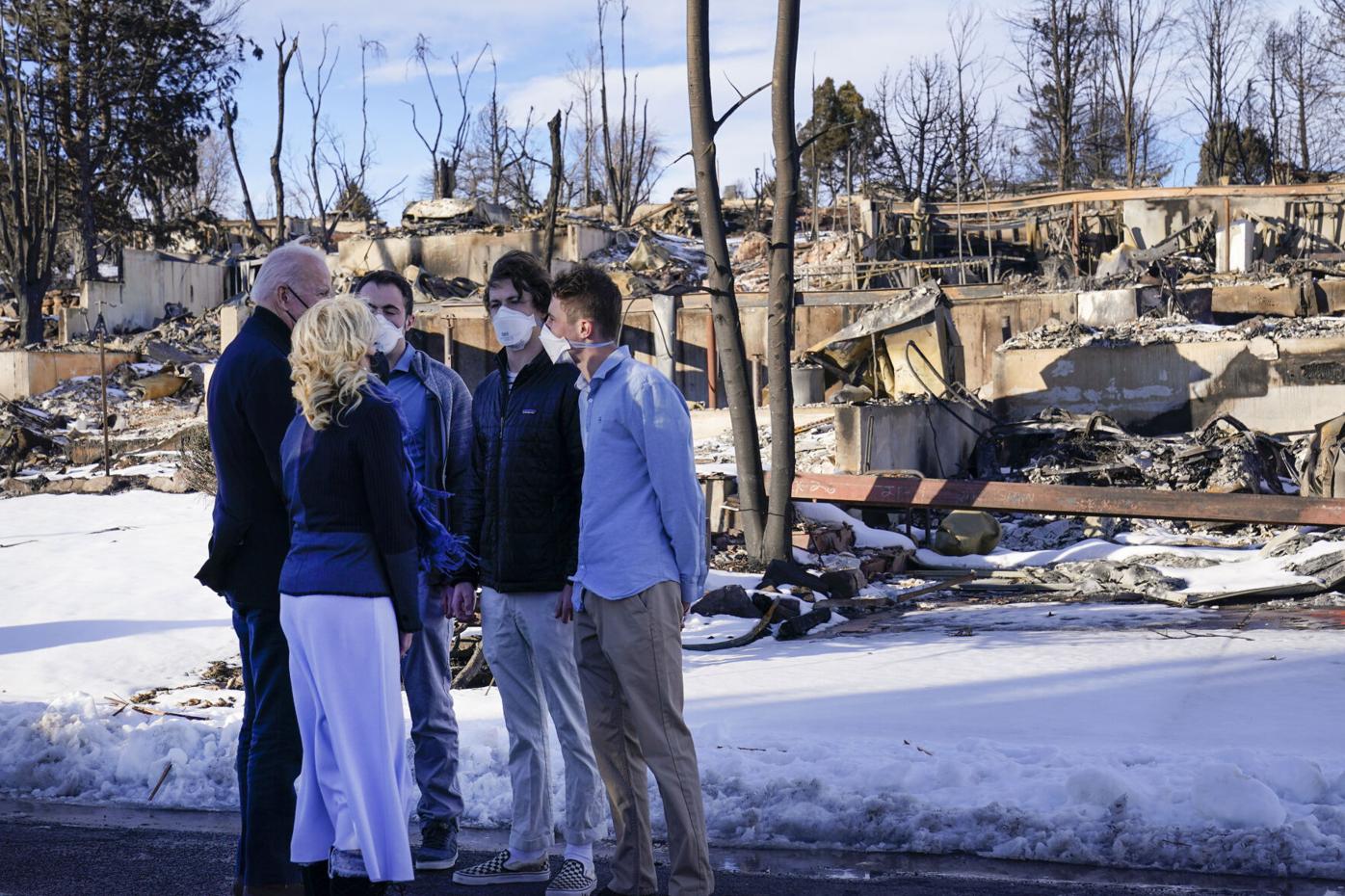 President Joe Biden and first lady Jill Biden talk with people as they tour a neighborhood in Louisville, Colo., Friday, Jan. 7, 2022, that was impacted by the recent wildfire. (AP Photo/Susan Walsh) 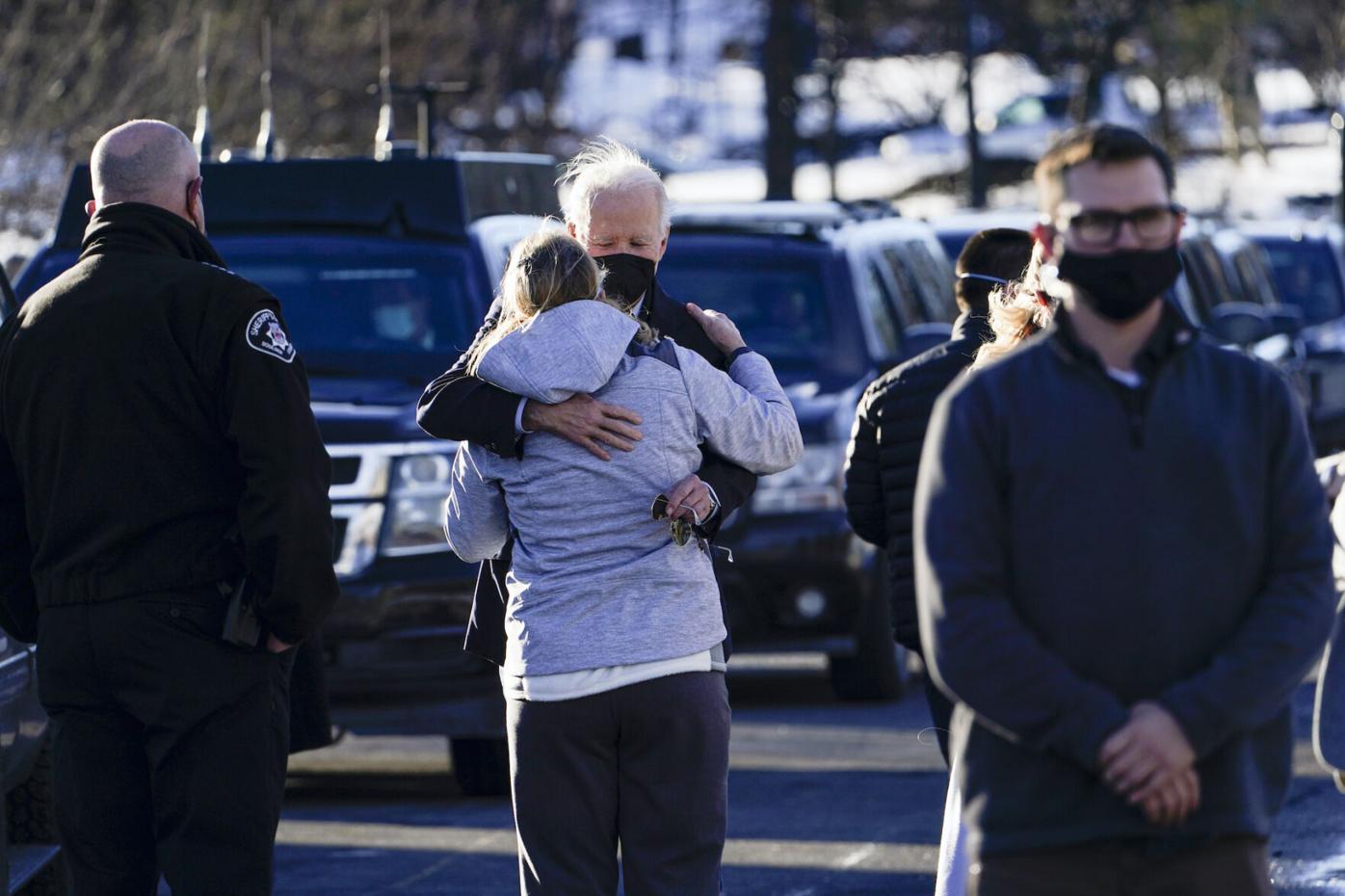 President Joe Biden gives someone a hug as he tours a neighborhood Friday in Louisville that was devastated by the Marshall fire. 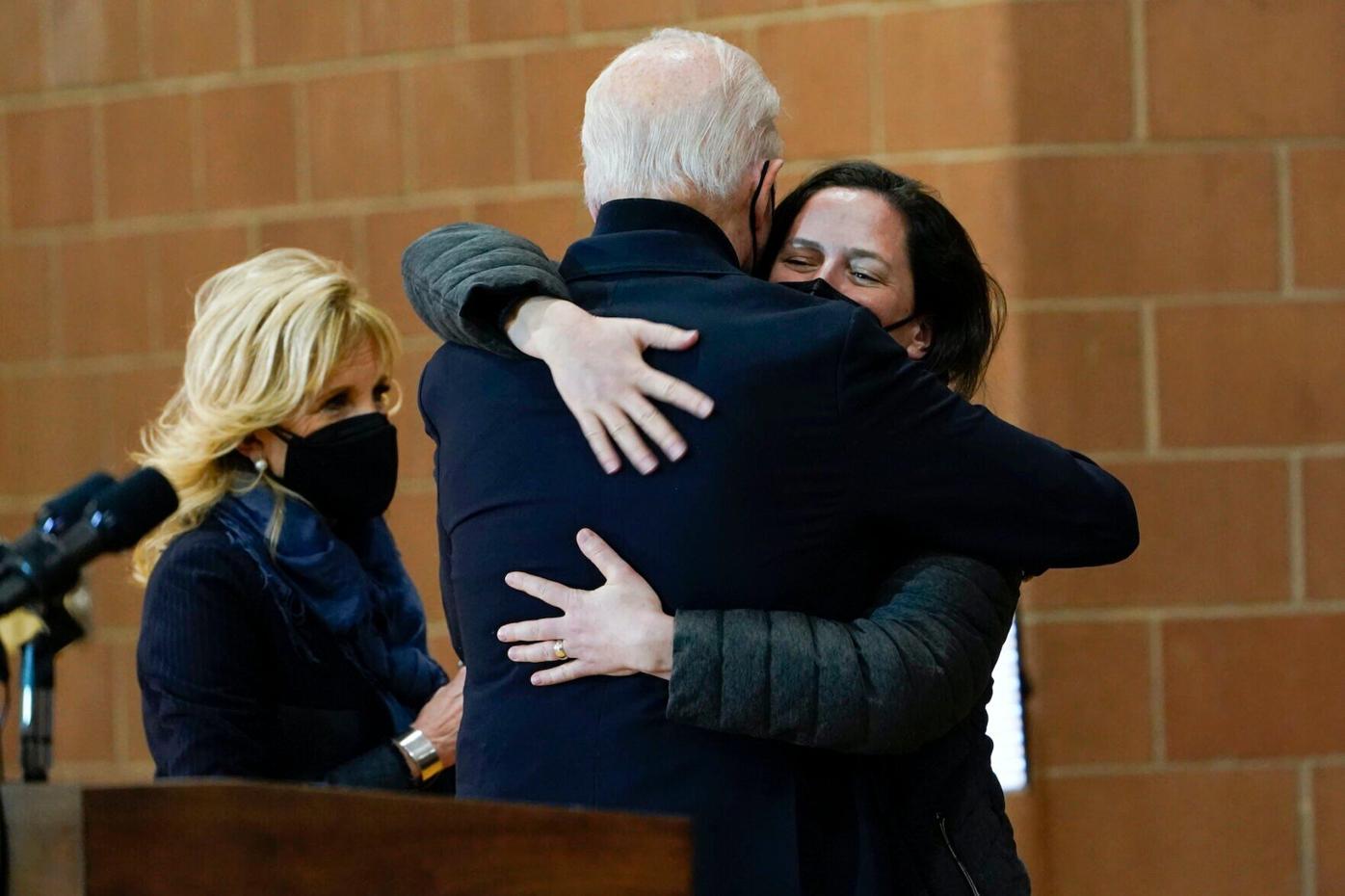 President Joe Biden gets a hug after talking about his administration’s response to the Marshall fire during a visit to Louisville on Friday, Jan. 7, 2022. Biden and first lady Jill Biden met with families and toured a Louisville neighborhood impacted by the blaze, the most destructive in Colorado history.

President Joe Biden and first lady Jill Biden talk with people as they tour a neighborhood in Louisville, Colo., Friday, Jan. 7, 2022, that was impacted by the recent wildfire.

President Joe Biden and first lady Jill Biden tour a neighborhood in Louisville, Colo., Friday, Jan. 7, 2022, that was impacted by the recent wildfire.

President Joe Biden on Friday gives a hug to a person affected by this past month’s winter wildfire as he tours an area hit hard by the Marshall fire in Louisville. Biden and first lady Jill Biden toured the areas where more than 1,000 structures were destroyed.

President Joe Biden and first lady Jill Biden talk with people as they tour a neighborhood in Louisville, Colo., Friday, Jan. 7, 2022, that was impacted by the recent wildfire. (AP Photo/Susan Walsh)

President Joe Biden gives someone a hug as he tours a neighborhood Friday in Louisville that was devastated by the Marshall fire.

President Joe Biden vowed on Friday that Coloradans who lost their homes and businesses to the devastating wildfire that tore through suburban neighborhoods in Boulder County last week can count on the federal government to stand by the communities as they rebuild.

Biden, accompanied by his wife, Jill, and Colorado officials, met with families who lost their homes and businesses in Louisville and Superior after touring areas ravaged by the Dec. 30 Marshall fire, which destroyed and damaged more than 1,000 structures and burned more than 6,000 acres.
Speaking at the Louisville Recreation and Senior Center, Biden said he was struck by the "incredible courage and resolve" on display among residents affected by the disaster, which ranks as the most destructive wildfire in Colorado history.
“It’s amazing, amazing what people do in crises," Biden said. "And my message to them and everyone impacted by this is that not only are you helping each other, but we’re here with you. We're not going to go away. The federal government’s not going to go away."

Turning to Gov. Jared Polis, who stood on stage, Biden added: "The governor’s been an incredible partner."

Polis urged the president to visit the area a week ago, and Biden officially approved a major disaster declaration on Dec. 31. The move makes federal funds available to help provide temporary housing and home repairs, as well as low-cost loans to cover uninsured property.

More than 35,000 people evacuated ahead of the fast-moving blaze, fueled by bone-dry grass and gale-force winds. Officials on Friday identified partial human remains discovered Wednesday as 69-year-old Robert Sharpe of Boulder. One other missing person remains unaccounted for.

The cause of the fire remains under investigation, though investigators have narrowed their search to an area south of Boulder where a passer-by captured video of a burning shed on Dec. 30, when the fire began.

“It’s as devastating as it looks on television,” Biden said after touring the damage, noting that he couldn't imagine anything more frightening than a fire.

"We got a chance to meet with scores of families in the neighborhoods across the street, many of which homes you all live in, and it’s really amazing to see the courage,” Biden said.

He noted that some police officers who lost their own homes stayed at work, helping others.

“It’s a measure of, I think, who are we as a country,” he said. "And we just walked the streets of Louisville and and a whole neighborhood gone. But people here and across Boulder County are stepping up for one another. They're stepping up."

Before his arrival at the recreation center, Biden and his entourage visited with families who lost their homes in the Harper Lake neighborhood of Louisville, where charred foundations stood under a blanket of snow next to burned-out vehicles.

"We're lucky to have a lot of great friends," one man said as he embraced the first lady. After Biden hugged the man, the man's son told the president: "We definitely need help."

At the recreation center, Jill Biden spoke briefly, praising "firefighters and police and EMTs and rescue and recovery teams for doing such a great job for this community."

She also expressed sympathy to families who lost pets in the fire.

"I would like to say, on a personal note, the governor told me how many of you lost their family pet. And you know, they’re members of the family, too, so I want to just say how terribly sorry we are for the loss of your pets because we’re animal people. So, we know what a tough loss that is,” she said.

Biden said that he recognized some of the terrain, recalling his visit in September to the nearby campus of the National Renewable Energy Laboratory, which develops solar, wind and other renewable technologies.

He referred to the climate crisis and the role experts say it played in the rare early winter fire.

“This situation is a blinking code red for our nation,” Biden said. "The combination of extreme drought, the driest period from June to December ever recorded — ever recorded — unusually high winds, no snow on the ground to start created a tinderbox — a literal tinderbox.”

He said the acreage burned nationally in wildfires last year is equivalent to the entire state of New Jersey burning to the ground.

"So there's so much that is gonna be able to be done," he said. "It's also going to create significant number of jobs. The reason I'm telling you this — I know that's no solace that you lost your home now, but it's that we're going to be able to do a lot of renewable things that allow you to not only rebuild but afford to rebuild and rebuild better, to build back better than it was before."

Referring to the effects of climate change, which many blame for extreme weather events, Biden said, “The bottom line here is we have to summon the courage to do something about it, to build back better as a nation."

Concluding his remarks, Biden said the entire nation is thinking about the residents of Boulder County. He added that his grandfather used to tell him, "'Joe, keep the faith,'" but his grandmother would interject, "'No, Joe, spread it.' Let's spread the faith and get it done."

Following Biden's visit, Neguse thanked the president and First Lady in a statement for seeing firsthand "the impact this disaster has had on our community and the ways in which our community is coming together to help each other through this devastating tragedy."

Added Neguse: "In the days and months ahead, our local, state and federal governments will be united to ensure our community and every family and individual impacted receives the help they need.”

— The Associated Press and White House Pool contributed to this article.