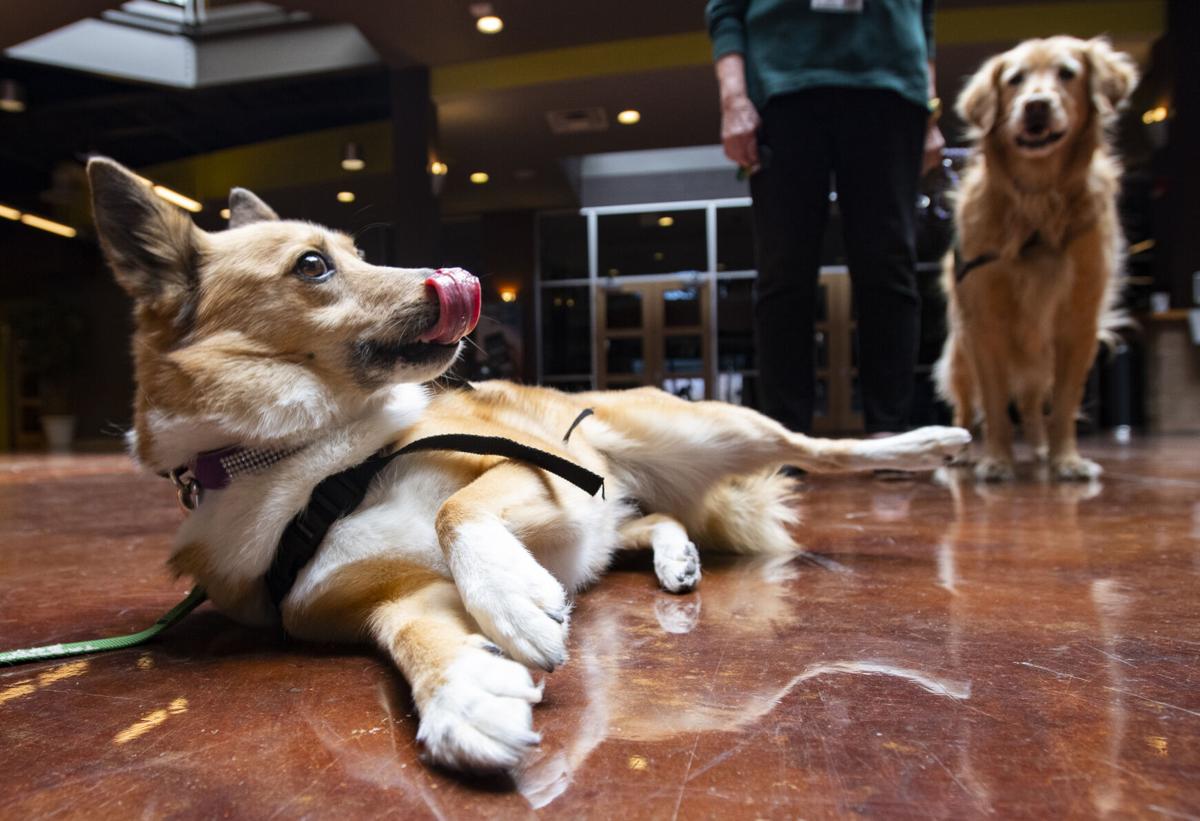 Therapy dog Grace, a Norwegian buhund mix, relaxes on the floor as Lucas, a golden retriever, watches in the background Friday 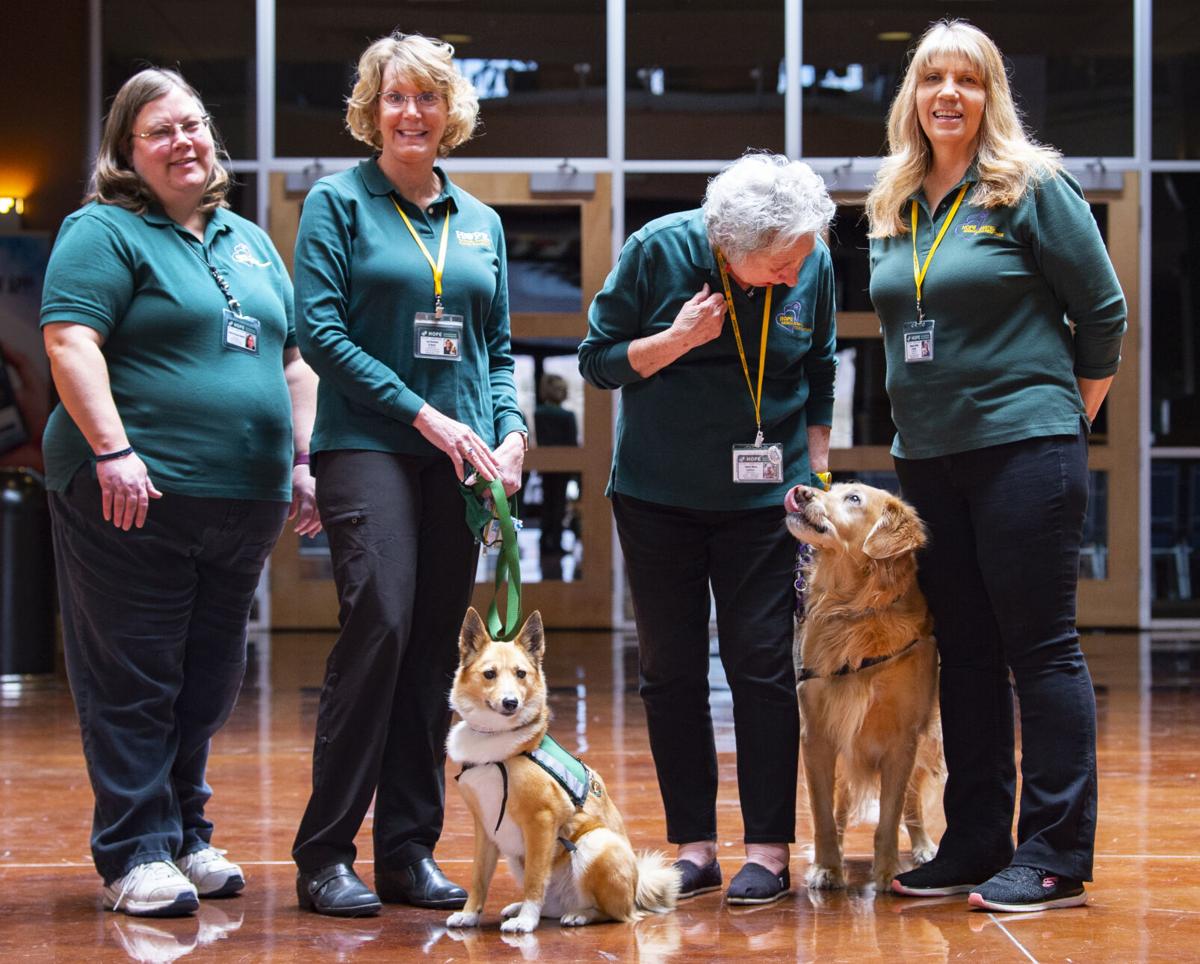 . Pictured with Grace and Lucas are, from left to right, team lead Joetta Graner-Smith, Lee Fernholz, Janice Mann and team lead Sandy Miller. The team responded to the recent mass shooting in Boulder. 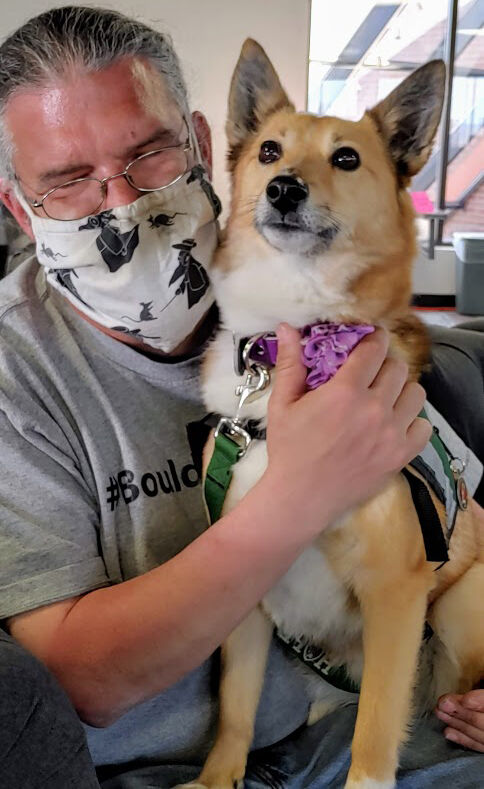 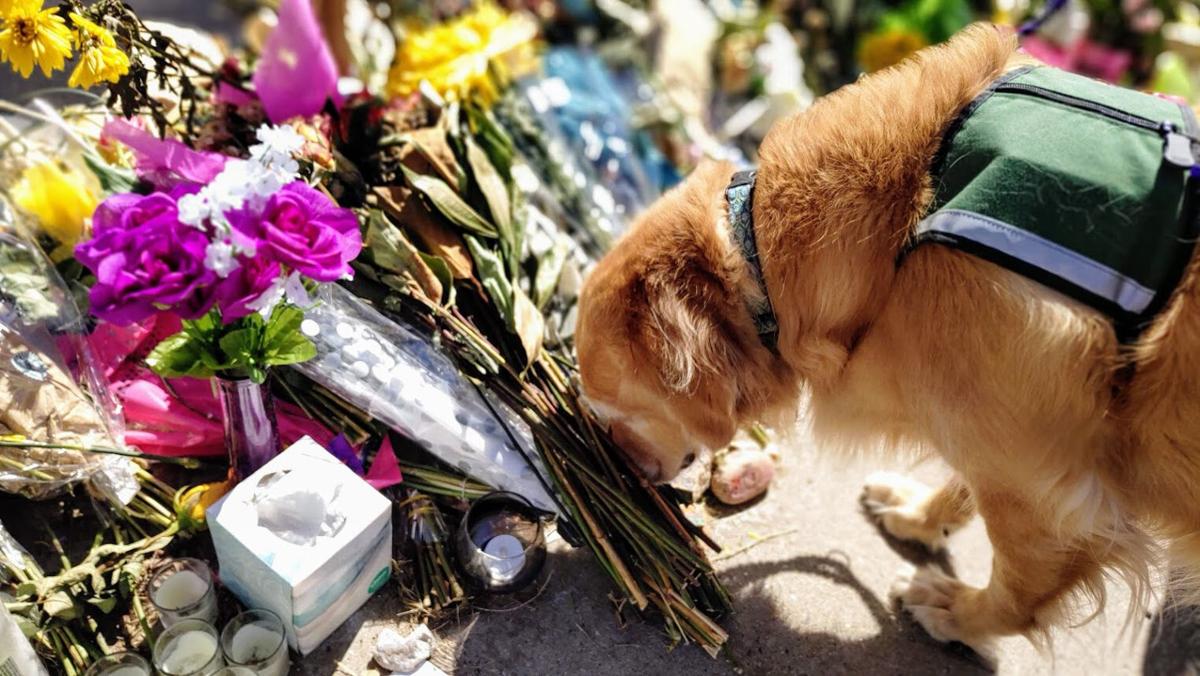 Lucas, a golden retriever, visits the memorial in Boulder. 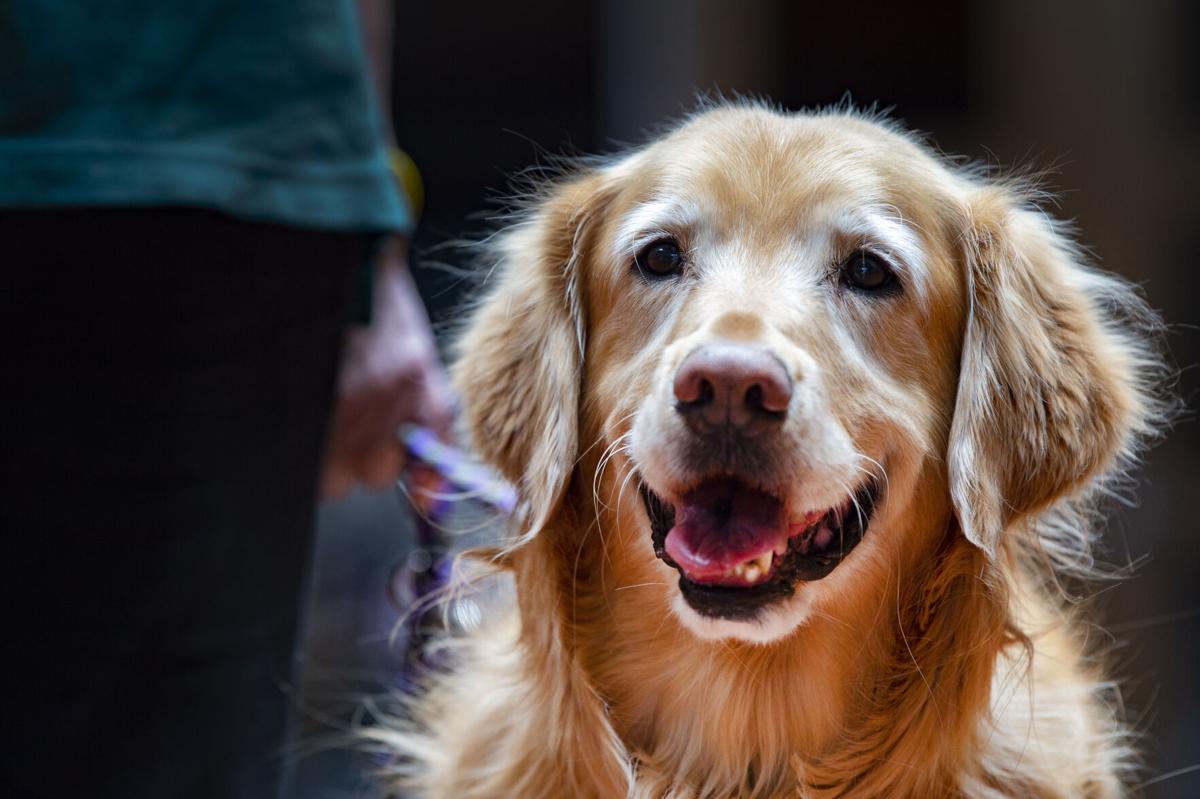 Trauma speaks in many voices, some of them too quiet for human ears.

The friendly man with the salt and pepper hair and glasses came into the family assistance center in Boulder in the days after the March 22 mass shooting at King Soopers.

While he waited for an appointment with one of the many agencies offering victims services, he struck up a conversation with one of the volunteer support teams that was on site.

The man talked about how he’d been outside the store when the shooting started in the parking lot, and how he’d been among the first people to call 911. As he sat and shared his story, he idly scratched the head of a small dog that sidled affectionately up to his leg.

Soon enough, the dog, Grace, made her mostly graceful move.

Grace’s owner and handler, Lee Fernholz, told the pup to get down, but the man said it was OK.

“He was, like, ‘No. I want her up here.’ You could tell that having Grace there was pretty cool for him. It was like a release,” Miller said. “Sometimes our dogs detect anxiety, and they’ll do things like give a paw, or snuggle really close. That’s their job, to comfort people, and that’s what she did.”

When the human spirit is in crisis, sometimes the best emergency therapy arrives on four legs, without any existential questions.

The comfort dog and handler teams with the Rocky Mountain region chapter of HOPE are part of a nationwide nonprofit that taps the healing power of man’s best friend to provide comfort and encouragement to individuals and first responders, in their local communities and beyond.

“Shootings, schools where there has been a death, mud slides, floods, hurricanes, just horrendous things,” said Springs-based HOPE volunteer Janice Mann. “If they think it is a situation where our dogs can help, someone, maybe the Red Cross, reaches out to our regional director and then we are dispatched to the crisis. If it’s out of town, we might be asked if anyone’s available to travel, on short notice.”

In 2015, teams were invited to be part of the crisis center set up after the Planned Parenthood shooting in Colorado Springs, and, in 2019, after the STEM school shooting in Highlands Ranch.

Since March 24, they’ve been at the Boulder resource center, 11 a.m. to 7 p.m., working with the survivors of a national tragedy that claimed 10 lives, including that of a city police officer.

After the family assistance center moved to a repurposed bank on March 30 and became the Boulder Strong Resource Center, HOPE set up camp in a central area with a table, couches and a few chairs, said Mann, who plans to head to Boulder next week with her comfort dog, Lucas, for a third deployment at the center.

“When people walked in the dogs were right there. Once they signed in and were waiting for whatever resource they needed, they could come and sit with us and just kind of be with the dogs before their appointment,” she said.

Mann said that she heard “over and over and over again” how much the dogs meant to the survivors and families who’d lost loved ones and neighbors.

“There was so much emotion. People would come in and they would be crying, they would be so upset,” said Mann. “What we witnessed, what we were told, over and over and over again, is that that store wasn’t just a grocery store it was like a community center, where people went and greeted and caught up with friends. It was just a place where people felt comfortable and safe.”

A dog can make you feel those things, too.

Miller has seen it happen.

“I’ve been involved in a lot of these (gun tragedies) over the years. Some mass, some single. What usually happens … they’re tense, their shoulders are tight. A lot of the time, they’re looking at the ground, not wanting to engage, afraid to engage. And then the dogs just come right up to them, and ahh it’s a different world. They put their hands down. They start petting the doggie. You just see everything relax,” Miller said. “I’ve been involved in interviews where the person just didn’t want to talk. And the dog moves in and crawls in their lap, and the words start flowing, tears start flowing, because they can finally release.

Any dog can be a HOPE comfort dog, but not every dog has the right disposition. They must first go through training and become certified therapy dogs.

From there, they (and their owners) must pass a series of rigorous tests to make sure they’re compassionate and people oriented, as well as on-the-ground trials, including a visit to TSA at the airport.

"They have to be very sensitive to people and not turn their back on them or lose interest, even if something else is distracting them," Mann said.

Once almost a dozen strong, the number of teams in Colorado Springs has dwindled over the years and during pandemic times. Dogs retired and passed away, and it’s been tough adding new teams since the space where workshops are held has been closed due to the virus.

Miller, with her dog Lani, was the first Colorado Springs team to become trained and certified with HOPE, back in 2012. She chose to stay on with HOPE as a team leader after Lani died two years ago, overseeing the other handler-dog teams on deployments.

Two days after the Boulder shooting, she was with the first HOPE teams to arrive at the temporary crisis center.

“It was rather slow those first two days, because people weren’t really aware of the (center) … and it had just happened. People were in shock and maybe not wanting to come,” Miller said.

But then they did come — some, they said, because they knew there would be dogs.

“They usually would have two or three dogs and handlers there, just kind of walking around, and people would gravitate to the dogs,” Dennis said. “What I also saw, during times where we didn’t have a lot of people at the center, just workers, the dogs would gravitate to people. The (volunteers) would tell us that sometimes the dogs have intuition about who’s really stressed. For us, it actually was really nice to have these moments where you could sit down and pet a dog. That’s where we really started seeing the value of having their presence … and not just in a crisis situation.”

“We had one case involving a juvenile victim and during the interview the victim was just petting the dog, and they just seemed to be noticeably less fearful and more calm during the interview,” Dennis said. “We usually call on them when we have any sort of critical incident, just to bring that additional support. That’s when we started having them come to the police operations center more regularly, just to meet with detectives, just having them around.”

It was the beginning of an official relationship Dennis said the department is eager to get back to as COVID worries, and constraints, ease.

“The HOPE dogs and volunteers are probably one of our biggest resources … for officers in doing the jobs they do, and for just providing that break — that moment of calm and peace, in the middle of what often are very stressful days,” she said.

When Sgt. Jason Newton leads his mindfulness training workshops for the CSPD, he opens by showing them a picture of a dog.

“And I ask them, ‘Why a picture of a dog,’” said Newton, the department’s community relations officer.

He then tells them why: “Dogs don’t think about the past, the future; they really only live in the moment. They love that moment,” Newton said. “When you come home from a long day at work, guess what your dog is doing? Wagging tail, they’re happy to be there. They don’t care what happened all day long, they’re just happy you’re there.”

That’s what HOPE dogs bring to his department, and every setting, where they visit.

“They bring us back into just living the moment and enjoying and appreciate that one moment. That might be the only moment you have that day of peace … so it really helps. They're an amazing organization,” Newton said. "A dog just comes into your office and puts its head in your lap and instantly, if you're a dog person, it does something to you.

Studies have shown that “therapy dog intervention” reduces stress and anxiety in people who have suffered traumatic events. Newton's brother leads the Iowa State University police department, which has a therapy dog on staff.

"A dog … it helps you forget about everything in the world except loving that dog in that moment. It’s funny when you see Chief or one of our commanders, our command staff, down there talking baby talk to a dog," Newton said. "You just get totally caught up in the moment, and that’s a good thing."

A visit from HOPE does make for some awkward conversations when he returns home after work, though.

“I’m spending half-an-hour explaining to my dog why I did not cheat on him, I promise," Newton said.

For more information about HOPE Animal-Assisted Crisis Response, and how to become — or request the services of — a volunteer team, visit www.hopeaacr.org

Boulder's grief spills over into public vigils, procession ahead of suspect's court appearance

Boulder's upswell of public grief spilled over Wednesday into public vigils, places of worship and a procession for a police officer slain whi…