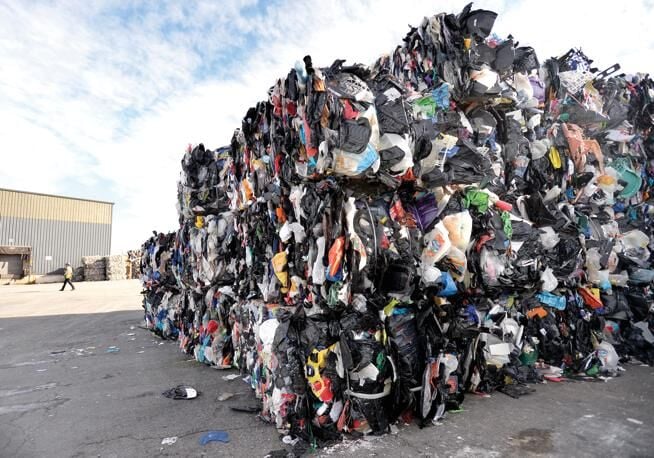 A pile of recycable materials at the Boulder Recycling Center. 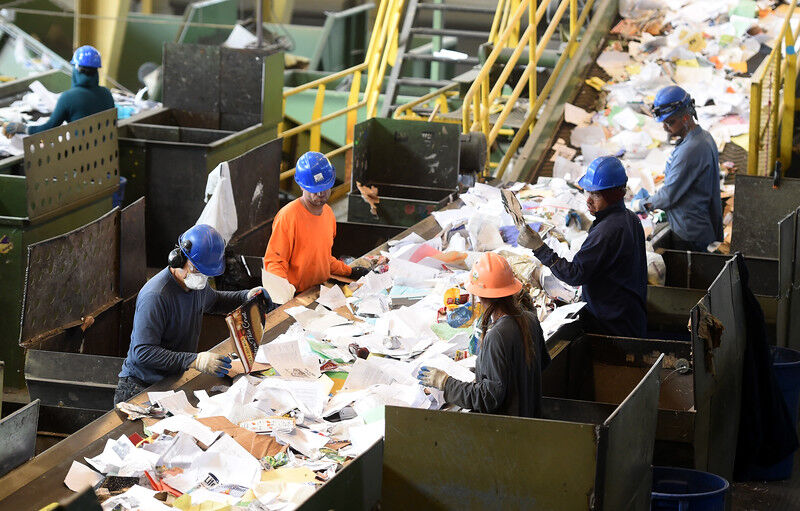 Materials are sorted at the Boulder County Recycling Center.

A pile of recycable materials at the Boulder Recycling Center.

Materials are sorted at the Boulder County Recycling Center.

Coloradans not only recycled less last year than in previous years, but also generated more waste that was dumped in landfills, according to the recently released State of Recycling in Colorado Report.

Recycling fell from a statewide rate of 17.2% in 2018 to 15.9% in 2019, says the report, which was co-authored by Boulder-headquartered Eco-Cycle, one of the nation’s largest nonprofit recycling businesses, and Denver-based Colorado Public Interest Research Group, a nonprofit that advocates for environmental policies.

That means Colorado’s recycling rate is less than half the national average of 35%.

The amount of materials being diverted countywide from landfills through recycling is an estimated 11%, said Alicia Archibald, a municipal consultant on solid waste management and diversion strategies who previously worked for a local trash hauler and recycler.

“We have the infrastructure; what we don’t have is the driver to motivate us as a community,” she said.

The key missing piece, Archibald said, is city oversight that would unify the process.

“Part of the reason we’re not as successful as other cities with recycling is we don’t have municipal management over the waste system,” she said.

“It’s hard to require anything when you don’t control the companies that would be picking it up,” Skorman said, adding that more than a dozen haulers do business in the region.

Many of the waste disposers also provide curbside recycling at an extra monthly fee of about $5 to $15.

While the state’s recycling numbers from last year were disappointing, other communities, including this year’s award winners announced in concert with the latest annual report, have found ways to improve participation, said the report’s lead author, Kate Bailey, policy and research director at Eco-Cycle.

For the fourth year, Loveland came out on top with a 60% residential recycling rate in 2019, followed by Boulder at 51%, Lafayette and Longmont tied at 36% and Fort Collins at 28%.

A decade ago, Manitou Springs became the first community in southern Colorado to contract with a single hauler for residential trash collection and recycling. Residents pay the private company, not the city, for the services.

Other communities attach a waste bill to the monthly utility bill, with the city managing the service.

Decades ago, Colorado Springs had an ordinance asking trash haulers to register with the city, but that has since been removed, Archibald said, because the law wasn’t enforced.

Other than that, “We’ve never had an initiative at the municipal level,” said Archibald, who has lived in Colorado Springs for 30 years.

A local proposal two years ago that came about from Recycle Colorado, a waste-diversion association where Archibald was a board member, to stop businesses from disposing of cardboard in landfills “didn’t go anywhere,” she said.

City leaders considered regulating commercial cardboard because it’s one of the more lucrative commodities and doesn’t involve a lot of shipping, Skorman said. Cardboard is also the state's most recycled material, Bailey said, next to yard waste.

“I’ll be open to it, especially for the commodities that make sense,” he said.

A move to reduce one-time plastic bag use in the city stalled a few months ago.

After being met with opposition, a proposed ban on one-time-use plastic bags at grocery stores and other local businesses turned into a proposition to charge a 10-cent fee per bag, to change personal behavior and promote reusable bags. A portion of the funds would have gone to the city for projects to reduce waste.

City Council in August rejected sending the measure to voters on the Nov. 4 ballot, with opponents saying the charge essentially would be a new tax and not a fee, since the money generated could be used for various purposes.

Skorman was one of three council members who supported the measure; six voted against it.

“The rest felt it was interfering too much with private business,” he said. “There is that problem to overcome; people don’t want to be imposing unnecessary regulations, sometimes to the point of not creating programs that might be a public benefit.”

That’s particularly true in Colorado Springs, which consistently gets labeled as one of the top five or 10 most conservative cities in the nation.

Ideas that seem to work best are those that have some kind of value attached, Skorman said, along the lines of programs that provide a refund to consumers who return containers, for example.

Taking Manitou Springs’ lead, an initiative that might garner support would be for the city to contract with individual haulers to cover only certain areas of the city and including recycling as part of the deal, Skorman said.

Reduced vehicle exhaust and wear and tear on the roads and improved traffic safety would be among the benefits for residents, he said, and would be worth it for the companies because recycling would increase.

It's in the companies' best economic interest to collect as many recyclable materials as they can to resell, Bailey said.

"If the recycler doesn't sell those materials, they have to pay for them to be landfilled," she said.

What’s disappointing to Skorman is that El Paso County residents are passionate about the outdoors, so it would seem to follow that they would embrace conservation efforts.

There have been encouraging signs. During the 2002 and 2003 drought, Colorado Springs residents conserved more water than any other city along the Front Range, Skorman said. It was an accomplishment he often bragged about.

He also touted the community’s 1997 approval of a .01% sales tax increase to fund the Trails, Open Space and Parks program that pays for acquiring, developing and preserving trails, open spaces and parks.

Voters also have supported parks by allowing the city to retain Taxpayer’s Bill of Rights money.

“It’s about education and making it beneficial for people,” Skorman said of gaining widespread backing for such environmental projects.

Archibald believes residents “want and would be more open today to recycling regulations because so much of our community are moving here from other places where they had to recycle.”

El Paso County has made progress.

The county’s Community Service Department Environmental Division runs a large household hazardous waste collection center at 3255 Akers Drive. The site accepts a variety of materials, including toilets, sinks, fertilizers, paints, automotive fluids and batteries, electronics, such as televisions and computers, cleaning products and other goods. Paper, aluminum and cardboard also can be dropped off. Yard waste and slash/mulch programs also are available.

The city of Colorado Springs has been focusing on sustainability initiatives since shortly after Mayor John Suthers was elected in 2015, said Ryan Trujillo, director of support services and the Office of Innovation and Sustainability.

The city provides single-stream, or mixed, recycling at all city facilities and contracts with Creative Outdoors to provide 101 trash and recycling receptacles in public spaces in the downtown area, he said.

The latter calls for the region to make “significant progress toward a zero-waste future” by 2030 by reaching a 70% reduction in solid waste sent to landfills, minimizing household hazardous waste and all businesses and public institutions to follow sustainable procurement guidelines.

The U.S. Environmental Protection Agency announced on Nov. 19 at the third annual America Recycles Summit a first ever national goal to increase the national recycling rate to 50% by 2030.

Statewide, Colorado is not on track to meet its goal of diverting 28% of waste from landfills by 2021, according to the annual report.

Her report recommends that efforts for improvement should be focused on the Front Range communities, which collectively produce 87% of the state's total waste.

Providing curbside service at homes is “one of the most important and proven steps cities can take to improve recycling,” the report says.

Colorado Springs and other cities such as Lakewood, Westminster, Pueblo, Centennial, Greeley, Broomfield and Littleton don’t automatically supply all residents with curbside recycling as a part of their trash service.

“Addressing this deficit is an obvious first step to increasing statewide diversion,” the report says.

“If you have one recycling can on this street and two on the next street, the trucks still have to drive down the whole street, which increases the cost of fuel and collection,” she said.

For those who wonder if recycling is worth the effort, Archibald says, “Recycling creates an estimated 10 jobs for every one job at a landfill.”

Bailey gives this example of how each resident can make a difference. A glass beer bottle that's tossed in a recycling container gets routed to a materials recovery facility, where the glass is sorted and transported to Momentum Recycling in Broomfield, where it's cleaned and divided by color and size.

The glass is then sold to Rocky Mountain Bottle Company in Wheat Ridge or Owens-Illinois in Windsor, where it's manufactured into new beer bottles.

“Your used beer bottle can be back on store shelves in just a few weeks, without leaving the state,” Bailey said.

The process creates local jobs and tax revenues, she said, and helps the environment.

Landfills in El Paso County have plenty of space to continue to expand, Archibald said. The question becomes "is that what we want?"

“We’re the second-largest county in the state; why aren’t we in second place for landfill diversion?” she said.

Colorado’s recycling rate dropped between 2018 and 2019, falling to 15.9% and remaining well short of the national average of 35%.