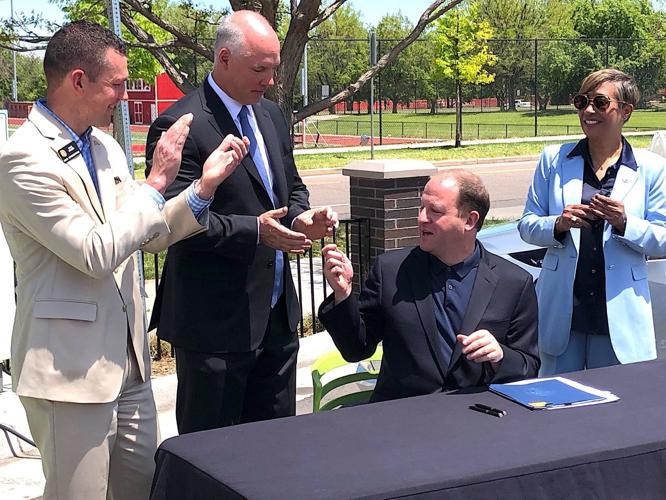 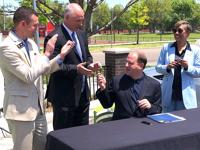 Gov. Jared Polis, seated, presents the pen he used to sign a bill that will urge utilities to build more charging stations for electric vehicles to Sen. Kevin Priola, R-Henderson, as co-sponsors of the bill, Sen. Angela Williams, D-Denver, and Rep. Chris Hansen, D-Denver, look on. 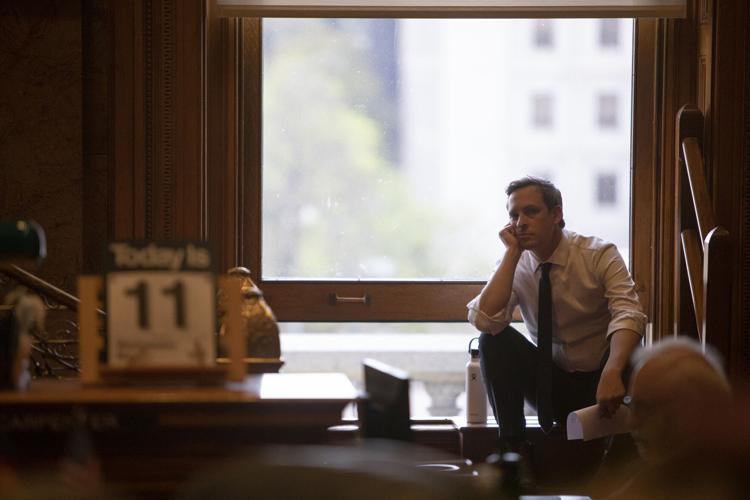 President of the Senate Stephen Fenberg looks on during the last day of the legislative session on Wednesday, May 11, 2022, at the Capitol building in Denver, Colo. (Timothy Hurst/The Denver Gazette)

Gov. Jared Polis, seated, presents the pen he used to sign a bill that will urge utilities to build more charging stations for electric vehicles to Sen. Kevin Priola, R-Henderson, as co-sponsors of the bill, Sen. Angela Williams, D-Denver, and Rep. Chris Hansen, D-Denver, look on.

President of the Senate Stephen Fenberg looks on during the last day of the legislative session on Wednesday, May 11, 2022, at the Capitol building in Denver, Colo. (Timothy Hurst/The Denver Gazette)

In the week prior to Colorado Sen. Kevin Priola announcing that he was flipping political parties, the soon-to-be-Democrat said in a text message to his soon-to-be party leader that he would share certain information with him but wanted to avoid the state’s email system so as not to leave a paper trail subject to public scrutiny.

Priola’s Aug. 14 text message with Senate President Stephen Fenberg, D-Boulder, about avoiding the Colorado Open Records Act was prompted by a Denver Gazette request to interview Priola about electric vehicles and Fenberg’s inquiry about what was asked, according to copies of the exchange provided to The Denver Gazette by a political watchdog group.

The newspaper’s interview request also appears to have prompted Priola to accelerate the announcement that he was switching political parties, according to the exchange. He announced the switch in late August.

Effort to recall Sen. Kevin Priola has 60 days to collect over 18,000 signatures

In it, Priola said he would share The Denver Gazette's email request with Fenberg, but only through their cell phone’s text messaging system.

“I was going to forward it to you but didn’t want any cora issues,” Priola texted Fenberg, apparently referring to the Colorado Open Records Act. “Can I send a photo via text?”

Fenberg approved the approach: “Sure.”

Priola then passed along a snapshot of The Denver Gazette email request for an interview with him.

It’s unclear why Priola thought the information was important enough to bypass Colorado’s official email system and, more importantly, sidestep the state's open records law. Political watchers wonder whether it was meant to avoid proof of any cross-aisle communications between the two senators before Priola’s party flip was announced.

“I thought I reviewed those carefully and don’t remember any of that,” he told The Denver Gazette on Monday. 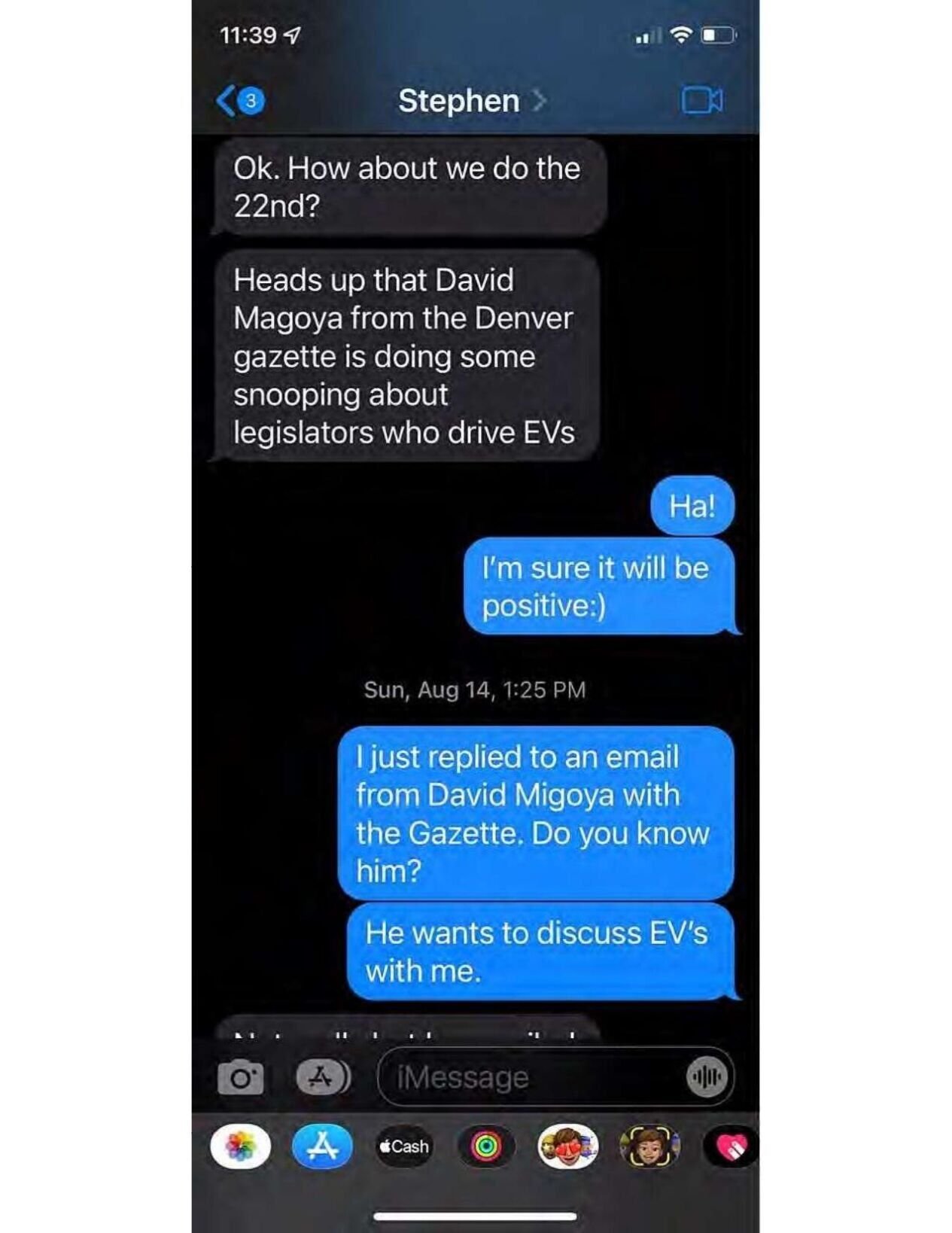 He said he would review the material and contact the newspaper with any explanation, but Priola did not respond to further efforts to reach him Tuesday.

Fenberg did not immediately return telephone messages left for him Monday and Tuesday by The Denver Gazette.

In their exchange, Priola and Fenberg also discussed moving up the timeline for Priola's switch to the Democratic Party as a direct result of The Denver Gazette's interview request.

Democrats sues Jena Griswold, one of their own, over Kevin Priola decision

“We are thinking now given something is up with the Gazette, it might be better to move on the state and party exchange asap,” Priola texted. “I wouldn’t want it to look like I changed because of whatever is published in the coming weeks.”

Later in the exchange, Priola said “a possible negative Gazette story changes our perspective on the timeline” of when to make the announcement.

Priola on Aug. 22 announced he was leaving the Republican Party after 30 years because it had not fully distanced itself from “a violent attempt to overturn a free and fair election,” referring to Jan. 6 attack on the U.S. Capitol, and the GOP “continues to peddle claims” of a stolen election.

Petitions were circulated within days to recall the Henderson legislator.

A week after his announcement, The Denver Gazette published a story about state legislators who drive electric vehicles – Priola and Fenberg among them – and regularly collect taxpayer-funded mileage reimbursements tied to the costs of operating more expensive gasoline-powered vehicles. The story pointed out that the state's reimbursement rate is determined by the legislature and tied to a federal IRS rate, which does not distinguish between the two types of vehicles.

With some exceptions, the Colorado Open Records Act applies to all government communications, no matter how it's created or where it is stored and transmitted, particularly when official business is discussed.

“It’s weird they somehow thought texting would avoid (CORA). It’s still communication for their job and it doesn’t matter the manner in which it’s done,” according to Suzanne Taheri, an attorney with Defend Colorado, which obtained the text messages and forwarded them to The Gazette.

Taheri explained that Defend Colorado frequently files open records requests “to look for issues of transparency, financial spending and accountability of elected officials.” The advocacy group does not disclose its contributors and largely supports Republican-aligned issues.

In this case, the organization was interested in communications between the two senators prior to Priola announcing he was changing political parties, Taheri said.

“It was about conflicts of interest and how they related to each other, how it was being planned out, so we ‘CORAed’ the communications to see how that worked,” Taheri said.

Part of the request included text messages, Taheri said, “because lately we don’t notice a lot is being done by email.”

“Our thought is the purpose is to get around CORA, and, in this case, they’re pretty much talking about it openly,” she said. “We’ve never seen legislators openly discussing it like this before.”

The public officials would plot a way to circumvent laws designed to give insight into how government works is disconcerting, according to Jeff Roberts, executive director of the Colorado Freedom of Information Coalition in Denver.

“The point of CORA is that there is a trail, a record, of public business being done by our elected officials and other public officials,” Roberts said in a telephone interview. “You would hope they’re not trying to circumvent that, but realistically, however, I know it happens and they use things like disappearing message apps. We already know it’s going on and it doesn’t surprise me that a public official would sometimes think that way.”

There were media accounts in 2019 about Colorado legislators relying on private-messaging apps, such as Signal and Confide, in which their communications were encrypted or destroyed, often discussions of the public business they conducted.

Roberts wondered at the time about the significance to the state’s transparency laws.

“It’s hopeless to request public records that self-destruct or can’t be accessed,” Roberts wrote in a blog post at the time. “If this is how some public officials now conduct official business, doesn’t that subvert the purpose of a statute meant to combat government secrecy?”

Democrats sue Jena Griswold, one of their own, over Kevin Priola decision

A lawsuit filed in Denver District Court Monday against the Colorado Secretary of State challenges her decision to allow voters in the new Senate District 13 to determine the fate of state Sen. Kevin Priola, the Republican-turned-Democrat from Henderson.