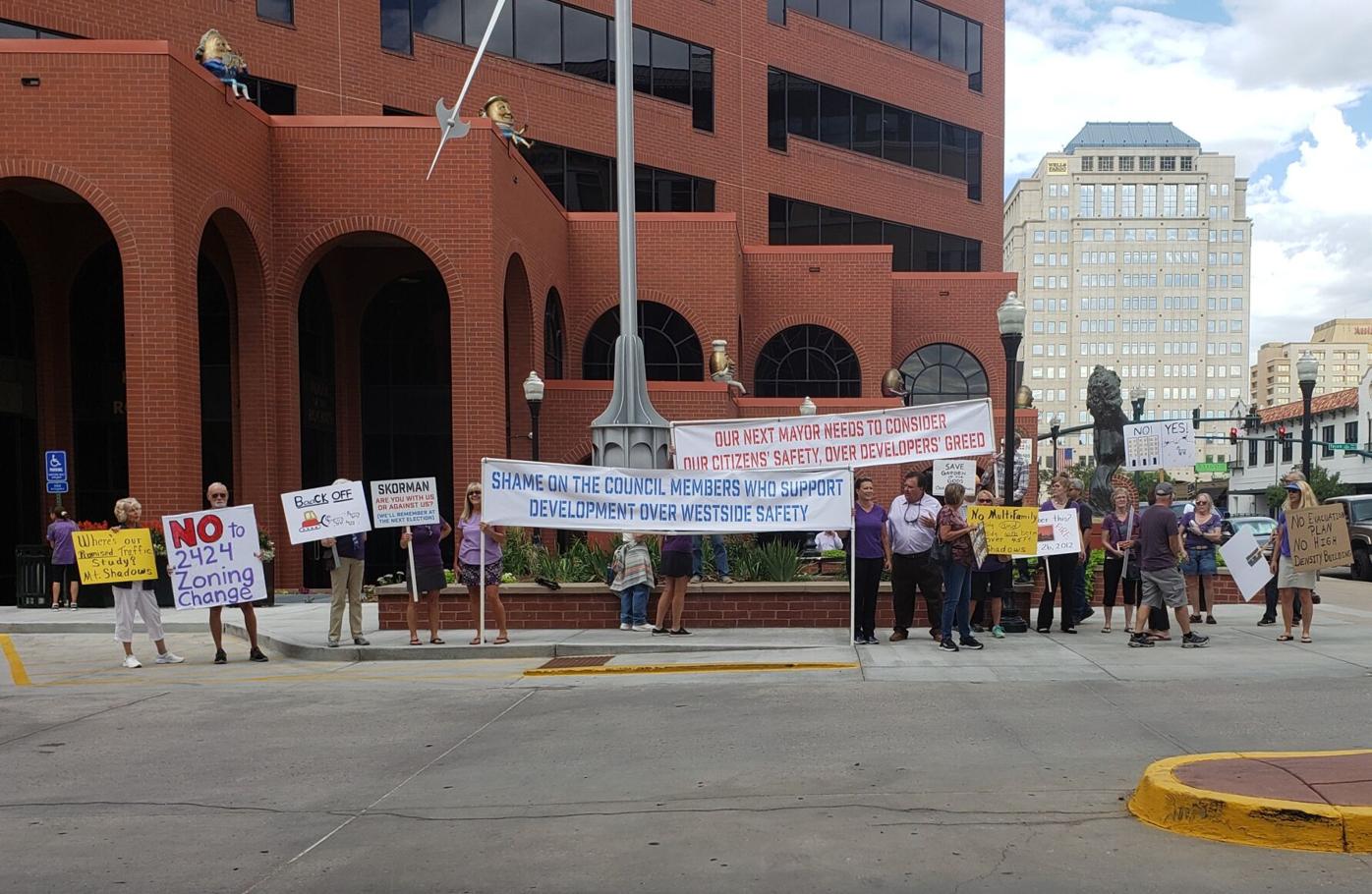 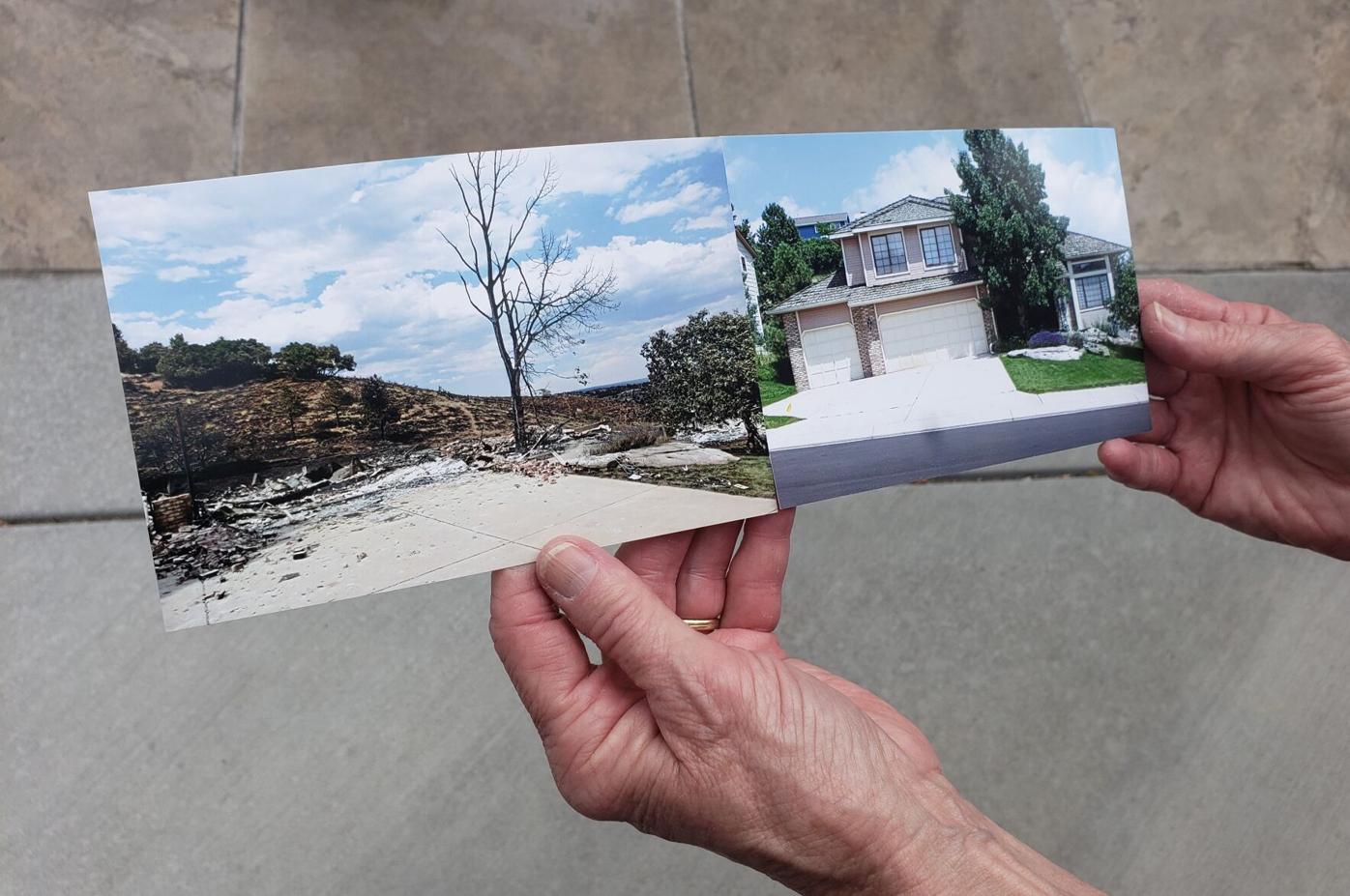 Maribeth Netherton brought photos of her home before and after the Waldo Canyon fire to the Monday protest of the proposed 2424 Garden of the Gods apartments. The neighbors are worried the apartments could make their neighborhood less safe in an evacuation.

Maribeth Netherton brought photos of her home before and after the Waldo Canyon fire to the Monday protest of the proposed 2424 Garden of the Gods apartments. The neighbors are worried the apartments could make their neighborhood less safe in an evacuation.

In a win for neighborhood advocates, the Colorado Springs City Council voted Tuesday to deny plans for a controversial apartment complex and business space along Garden of the Gods Road that residents opposed because they feared it could make wildfire evacuation more dangerous, among other concerns.

The council voted 5 to 4 to deny up to 420 apartments and additional commercial space planned for 2424 Garden of Gods Road in front of an existing 750,000-square-foot office building along north 30th Street on underused parking lots.

Those in favor of the project valued the additional market-rate housing, while those opposed were concerned that even more residents on the westside could make it less safe in a wildfire.

Councilman Dave Donelson, the northwest Colorado Springs representative, was among those who voted against rezoning the property, in part because it could lengthen evacuation times for residents in a wildfire. He also noted that even though the property is on a major roadway, the new residents could still slow down an evacuation process for those living in more dangerous areas.

"Those exposed homes get even more exposed. ... You can’t get as many people through that door if we fill the room up," he said.

In May, the necessary zoning for the project was approved on a 5 to 4 vote, along with other necessary documents. The project was then delayed by a vote of council in June to allow for additional traffic and safety analysis to address concerns residents raised about evacuations and daily traffic.

Councilman Richard Skorman was swayed Tuesday and changed his vote to side with the opposition, noting that the city might be getting ahead of itself by approving the housing without knowing what an appropriate level of density is for the west side or having evacuation planning software in place.

"I can’t support this kind of a dense project right now for health safety reasons," he said.

Board members in favor of the project noted that the community is in a housing crisis and that the housing would generate less traffic on a daily basis than if fully the property is built out as an office complex.

"I think this is a desperately needed project. … We need to provide housing for our community," Councilman Wayne Williams said.

Following the denial, the developers could appeal the decision to district court or resubmit a proposal, said Steve Mulliken, a lawyer representing developers.

Mountain Shadows Community Association President Bill Wysong, who helped lead the charge against the development, said he was thankful for the vote and expected residents through the newly formed Westside Watch would continue to push the city to analyze how long evacuations on the westside neighborhoods could take, to help govern development in a more wholistic way.

The association led the charge against the project, collecting more than 6,000 signatures from residents opposed to new homes and commercial development and raising $11,800 to fight the project. In addition to concerns about evacuations, residents also argued the development block views of the ridgelines, new residents would disturb the nearby bighorn sheep herd, and the new apartments wouldn't meet the true demand for housing.

City staff did not complete a safety analysis of the area as a City Council motion called for in June, a point that the several Mountain Shadows neighbors pointed out.

"A verbal statement saying, 'Don’t worry,' is not a plan," Mountain Shadows resident John McLain said. A simulation and modeling specialist, McLain consulted with the developers of Fast Local Emergency Evacuation Times, or FLEET, software to estimate how long it could take evacuate the neighborhood and found it could take 5 hours and 20 minutes.

Fire Chief Randy Royal could not say what the appropriate total residential density of the westside could be, but he emphasized that homes built near wooded areas need to be hardened to help prevent fire, and that residents need to take responsibility for fire mitigation.

He also said that his department is ready to deal with another large fire.

"I am confident in our abilities along with the police and emergency to be able to do large evacuations," he said.

Police Chief Vince Niski and Royal said while those staffing shortages exist, the departments could pull in staff from other departments to help in an emergency.

Council President Tom Strand promised to continue working on evacuation issues, noting that the fight over the apartments had raised the board's awareness around fire safety.

"I am going to keep my foot on the pedal to keep everybody safe," he said.