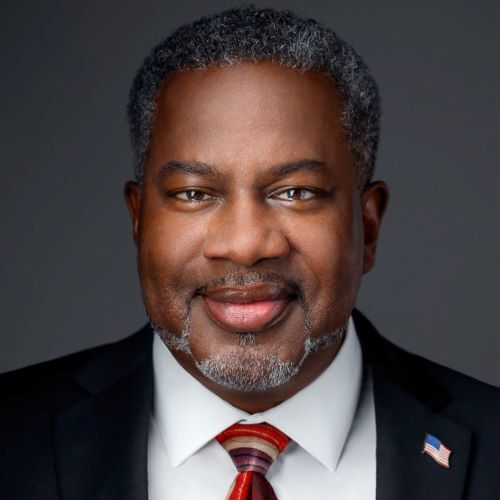 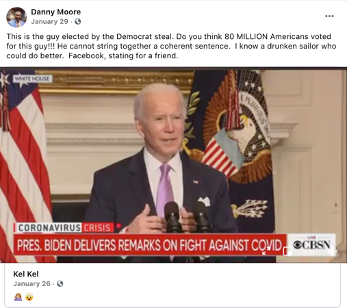 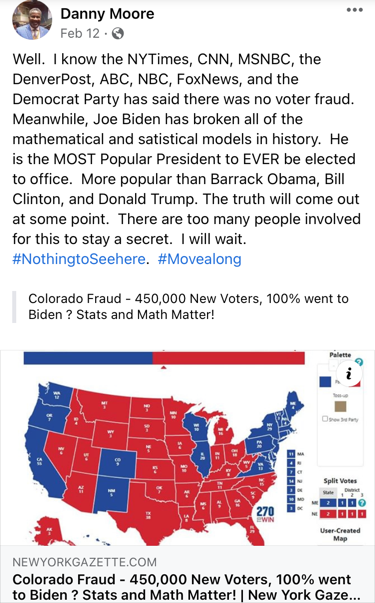 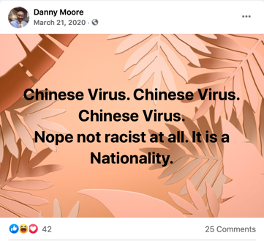 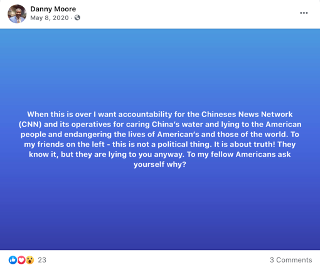 Colorado’s inaugural Congressional Redistricting Commission chairman Danny Moore has been voted out of his leadership position, days after his inflammatory social media posts were reported by The Gazette and other media outlets.

Moore authored posts that questioned the 2020 election outcome and called it “The Democrat steal,” as well as posts defending using “The Chinese virus” to describe COVID-19 as not racist, posts accusing media of lying about the coronavirus pandemic and posts accusing a Denver TV station of staging a confrontation that led to a security contractor hired by the station shooting and killing a man at a protest in the summer of 2020.

Two Democratic Party-affiliated redistricting advocacy groups asked people to sign a petition for Moore's removal. And the commission's public comments page had in recent days became a forum for outcry. Most called on Moore to resign his position. Some came to his defense.

Monday morning, prior to the commission's meeting, Moore posted on his Facebook page that an effort by "the left" was trying to get him removed from his chairmanship, and he called on people to write into the commission's public comment page in his support.

Moore said in an interview Monday morning he planned to fight any calls for his removal or resignation.

Later, at the first commission hearing since reporting on Moore’s social media posts, he defended his words as the expression of his First Amendment rights and his right to his opinions. He also attacked 9News, the same local TV station that hired the security guard he mentioned in his posts, saying their coverage of his social media use had selectively quoted him. He accused the statiob of being motivated to “smear” him because of what he had written about it in his Facebook posts. Moore also read comments he said were from his friends, who called the recent coverage racist because he is Black.

Following Moore’s statement, seven of the 11 other commissioners — Democrat, Republican and unaffiliated — expressed their disappointment with and disapproval of Moore’s online comments, and called on Moore to resign as chairman.

Democratic Commissioner Paula Espinoza read aloud from some of Moore's posts, including the post defending the use of "The Chinese virus" to describe COVID-19 as racist, saying that his comments are part of a trend of anti-Asian sentiment online and anti-Asian violence in public.

"How then can the people of Colorado believe Commissioner Moore will be able to determine fact from fiction, when he's repeatedly asserted unsubstantiated claims that the presidential election was stolen, the Colorado election in particular was fraudulent, and that 'Blue state officials' in Colorado disenfranchise some voters by manipulating the vote," she said.

Republican Commissioner Bill Leone, a former U.S. Attorney for Colorado and former member of the state's Independent Ethics Commission, said Moore's defense of his posts as his expression of his First Amendment rights, and Moore's assertion that his critics were attacking him personally instead of his ideas, was not convincing.

“I find them relentlessly partisan. I find them personally offensive, and if the standard for political discourse is that we should attack the issue and not the person, then the social media I read in the Gazette and other sources fail that test because they (include) personal ad hominem attacks on President Biden, and I think they were devoid of evidence," Leone said.

“Your resignation of chairman of this commission will allow us to move forward with the important task of the redistricting process,” party-unaffiliated commissioner Lori Smith Schell said.

Moore rejected their requests, and instead asked the commission to vote on the matter.

Moore was voted out in 11-0 vote. Moore abstained.

Carly Hare, unaffiliated, who was previously the vice-chairwoman of the commission, has taken over as chairwoman.