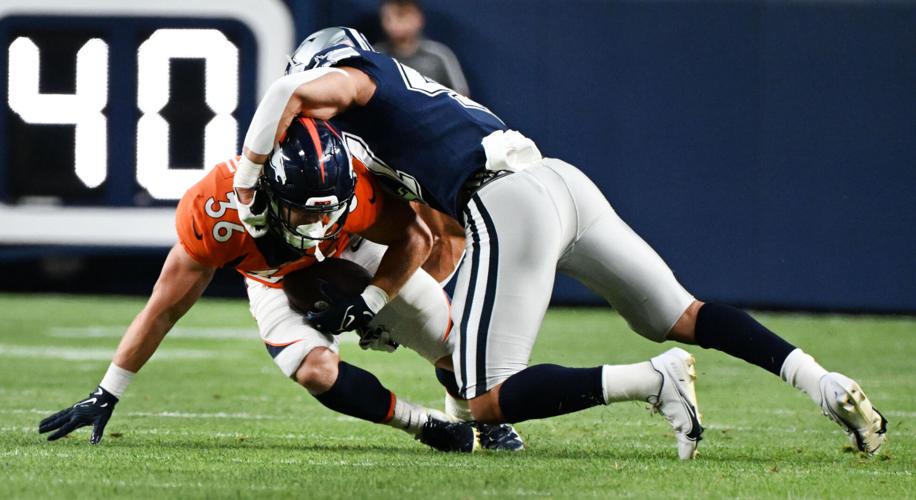 Denver Broncos running back Max Borghi (36) is tackled by Dallas Cowboys linebacker Storey Jackson (47) after a short gain during the second quarter Saturday, Aug. 13, 2022, at Empower Field At Mile High in Denver. (The Gazette, Christian Murdock) 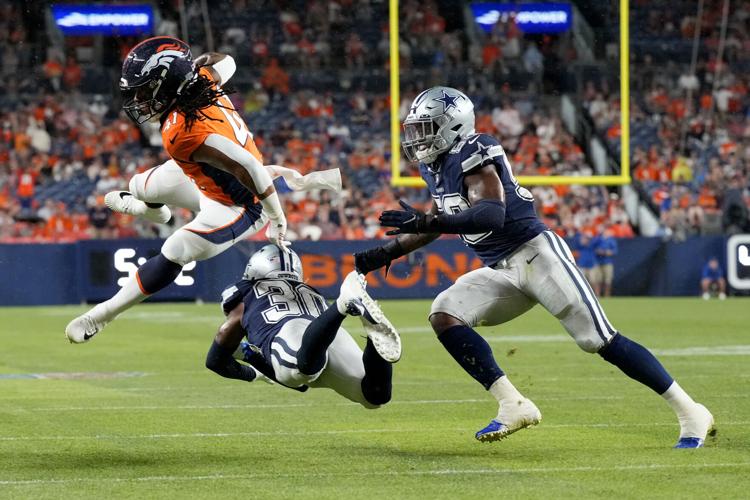 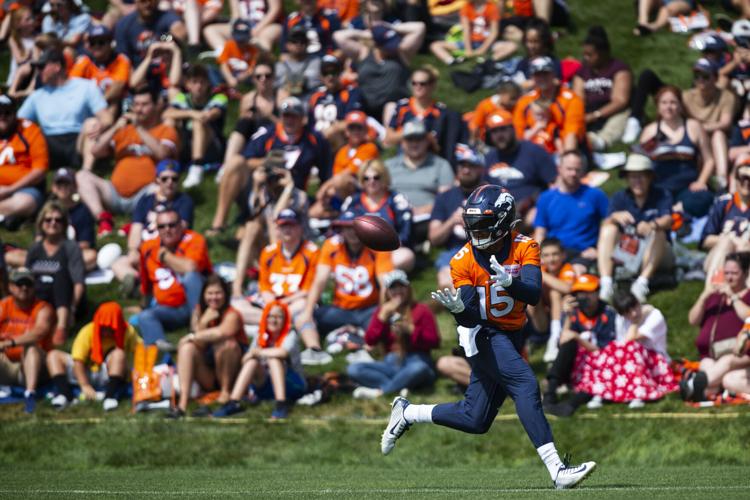 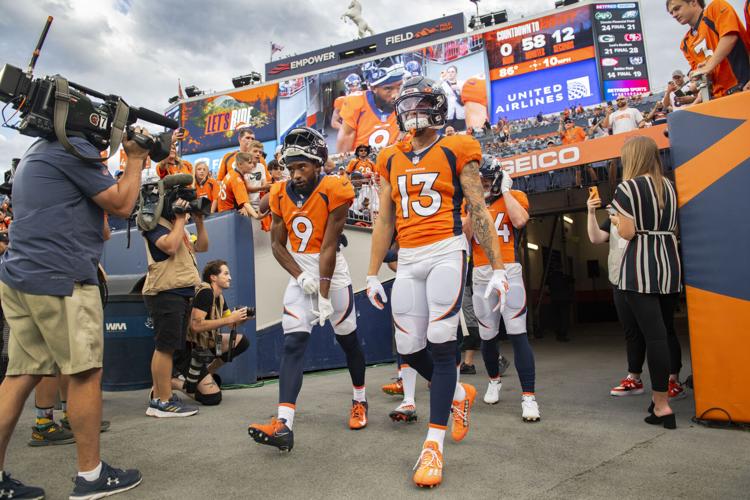 Denver Broncos wide receivers Kendall Hinton (9) and Kaden Davis (13) run onto the field for warm ups before the Broncos preseason game against the Dallas Cowboys Saturday, Aug. 13, 2022, at Empower Field At Mile High in Denver. (The Gazette, Christian Murdock)

Denver Broncos running back Max Borghi (36) is tackled by Dallas Cowboys linebacker Storey Jackson (47) after a short gain during the second quarter Saturday, Aug. 13, 2022, at Empower Field At Mile High in Denver. (The Gazette, Christian Murdock)

Denver Broncos wide receivers Kendall Hinton (9) and Kaden Davis (13) run onto the field for warm ups before the Broncos preseason game against the Dallas Cowboys Saturday, Aug. 13, 2022, at Empower Field At Mile High in Denver. (The Gazette, Christian Murdock)

ENGLEWOOD — The Broncos cut their roster down to 85 players Tuesday.

By 2 p.m. Tuesday, the Broncos and the 31 other NFL teams had to cut five players from their 90-man rosters. The Gazette confirmed that the Broncos waived the following players Tuesday: safety Jamar Johnson, running back Max Borghi, wide receiver Kaden Davis, tight end Rodney Williams and wide receiver Travis Fulgham.

"First and foremost, it sucks," coach Nathaniel Hackett said after Tuesday's practice. "These guys have been busting their (butts) — you go all the way back to Phase I. They're a part of our group, a part of our family and we appreciate everything those guys have done. And there is a human element."

Borghi attended Pomona High School in Arvada before continuing his college career at Washington State. The 5-foot-10, 205-pound running back was a standout in high school, rushing for 3,512 yards and 50 touchdowns. The Broncos signed Borghi after Damarea Crockett tore his ACL the second week of training camp. In his lone preseason game, he ran for 10 yards on four attempts.

But the biggest surprise of the cuts was Johnson, who the Broncos drafted in the fifth round of the 2021 NFL Draft. The safety from Indiana was expected to compete for a roster spot this season after spending most of last year on the practice squad. He played in three games in 2021, contributing on special teams. Last year, the Broncos kept five safeties on their original 53-man roster.

At wide receiver, the departures of Davis and Fulgham means the competition for the final couple spots in the receiver room is a little clearer. Courtland Sutton, Jerry Jeudy and K.J. Hamler have secured their spots, while Montrell Washington and Kendall Hinton appear to be the other frontrunners. But Jalen Virgil, Brandon Johnson and Trey Quinn are making a real push to make the roster.

The next cut day will be Tuesday, Aug. 23, when the roster will have to go from 85 to 80. And the final cut day, in which the Broncos will have their official 53-man roster, is Tuesday, Aug. 30.

"It’s a hard time, regardless. Anytime you make any cut, you’re always making hard decisions because the guys have really done a great job — everybody," Hackett said. "I think I’m very lucky to have a guy like (General Manager) George (Paton) that you can communicate with, you can talk with. If you have a disagreement, you can work it out and try to figure out what’s best for the team in the long run. Talking about the football aspect, the person is another thing. All those different things — we want to be sure that we’re having the right people here that are doing their job and we’re on the same page from that standpoint."

Starting center Lloyd Cushenberry didn't practice Tuesday, along with rookie center Luke Wattenberg. Hackett said Wattenberg is day-to-day with an ankle injury and that they're "just resting (Cushenberry) out and just making sure he’s good. We’ll just take that day-by-day."

The Broncos did have outside linebacker Jonathon Cooper (hand) practicing Tuesday for the first time this preseason. Cornerback Ronald Darby (chest) is also expected to be a full participant in practice again soon.