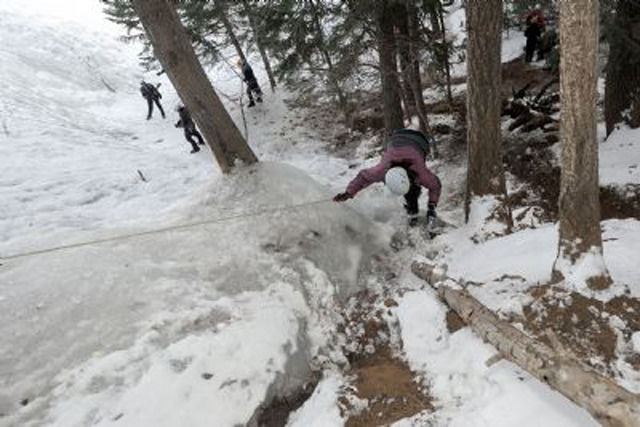 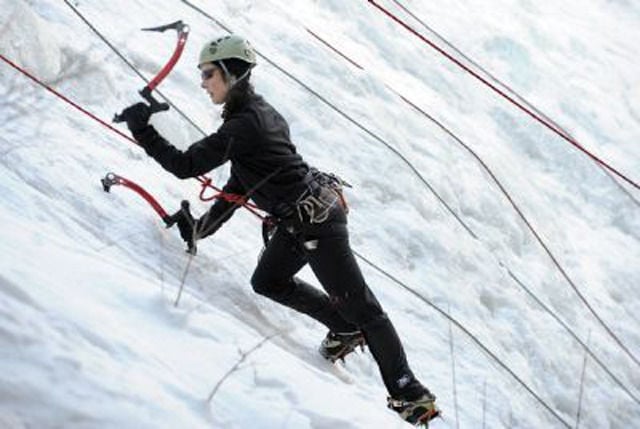 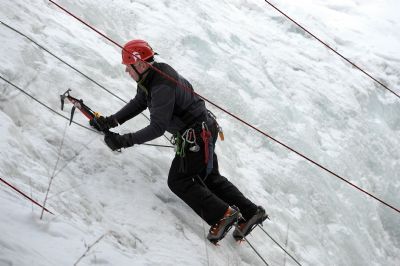 As far as Stewart Green is concerned, there are two ways to experience ice climbing.

The daunting nature of the sport — pulling yourself up a slick, frozen surface that can break loose at any time — meant that until recently, the handful of waterfalls in the Pikes Peak region that could be climbed in winter mostly weren’t.

“You usually had the place to yourself, but probably over the last 15 or so years, as the equipment has improved, ice climbing has become a lot more popular as a mainstream activity for climbers,” Green said.

Nowhere in the region is the transformation of the sport more evident than at Silver Cascade Falls, a summer tourist spot that becomes a 165-foot-tall ice slab in the frigid, shaded valley of North Cheyenne Cañon Park in winter.

“Silver Cascade is probably the closest destination there is in the Pikes Peak region for true ice climbing,” said park ranger Jeff Haley.

Fed by rain and snowmelt on the slopes of Mount Rosa, Buffalo Creek cascades down St. Mary’s Falls, a popular summer destination, before reaching Silver Cascade Falls. The ice usually forms in mid-November, and in the dead of winter it might see 100 climbers a week. It has a difficulty rating of 2, on a scale of 1 to 5 (5 is most difficult), and never reaches more than a 70-degree angle.

“It’s not real challenging,” said Brian Shelton, owner of Front Range Climbing Co. in Colorado Springs, who teaches beginner classes there. “It’s an excellent place to teach because it’s a lower angle and there are a lot of opportunities on the ice.”

It also has easy access — a few minutes’ walk from the Helen Hunt Falls parking lot — and two sturdy trees at the top for anchoring ropes. The falls are wide enough for two groups to climb simultaneously, and climbers talk of seeing as many as six ropes on the face at once.

“We get climbers from all along the Front Range, even the Denver area, that come down, because it is so easily accessible and more a beginner route for a lot of people just getting into the sport,” Haley said.

Arid and temperate Colorado Springs as a regional ice climbing destination? Believe it. The falls can get crowded on winter weekends.

Silver Cascade Falls is the only reliable ice-climbing spot in the region. Some climb at Hully Gully, a much more difficult (4 rating) waterfall off Old Stage Road that is harder to reach, and while there are whispers of other spots in the area, little evidence exists.

For Green, who climbed at Silver Cascade Falls as a young man, the area has become too popular. The beginners chop up the ice by using their tools and crampons too heavily, and commit the climbing faux pas of leaving their ropes, he said.

Green would like to see a man-made ice climbing park, similar to the one in Ouray, but it would have to be on private property — and local climbers have not found a good location.

“That’s one of the main problems, just not enough ice for the number of people around here who want to go ice climbing.”Silver Cascade FallsGetting there: Take Cheyenne Road to North Cheyenne Canyon Road. Turn right and drive into the park. Park at the Helen Hunt Falls parking lot and walk across the bridge. Look for a trail to the left running down to the creek bed and follow it to the base of the falls.Details: A free permit is required to climb. Permits can be obtained at the Garden of the Gods visitor center. Crampons or grippers such as Yaktraks may be needed for the hike in, as the trail can be icy.More: Check out “Colorado Ice Climber’s Guide” by Cameron M. Burns or go to mountainproject.com.