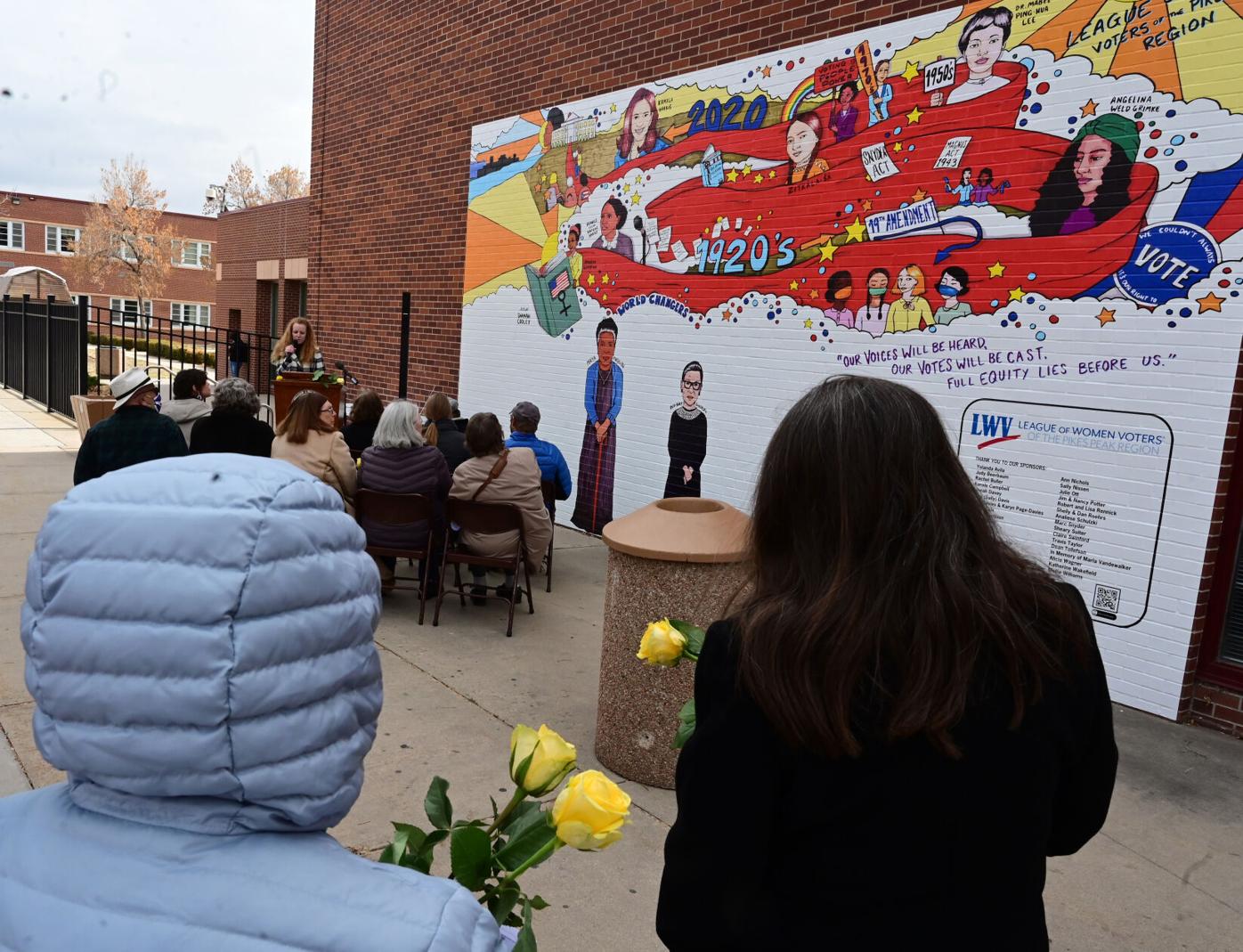 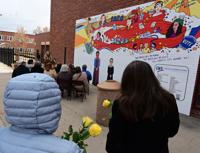 The League of Women Voters put a mural on the side of Palmer High School and held a dedication for the mural on Monday, Nov. 1, 2021. Palmer graduate Shanah Cooley was the artist. The mural was done on vinyl and then attached to the building. (Photo by Jerilee Bennett, The Gazette) 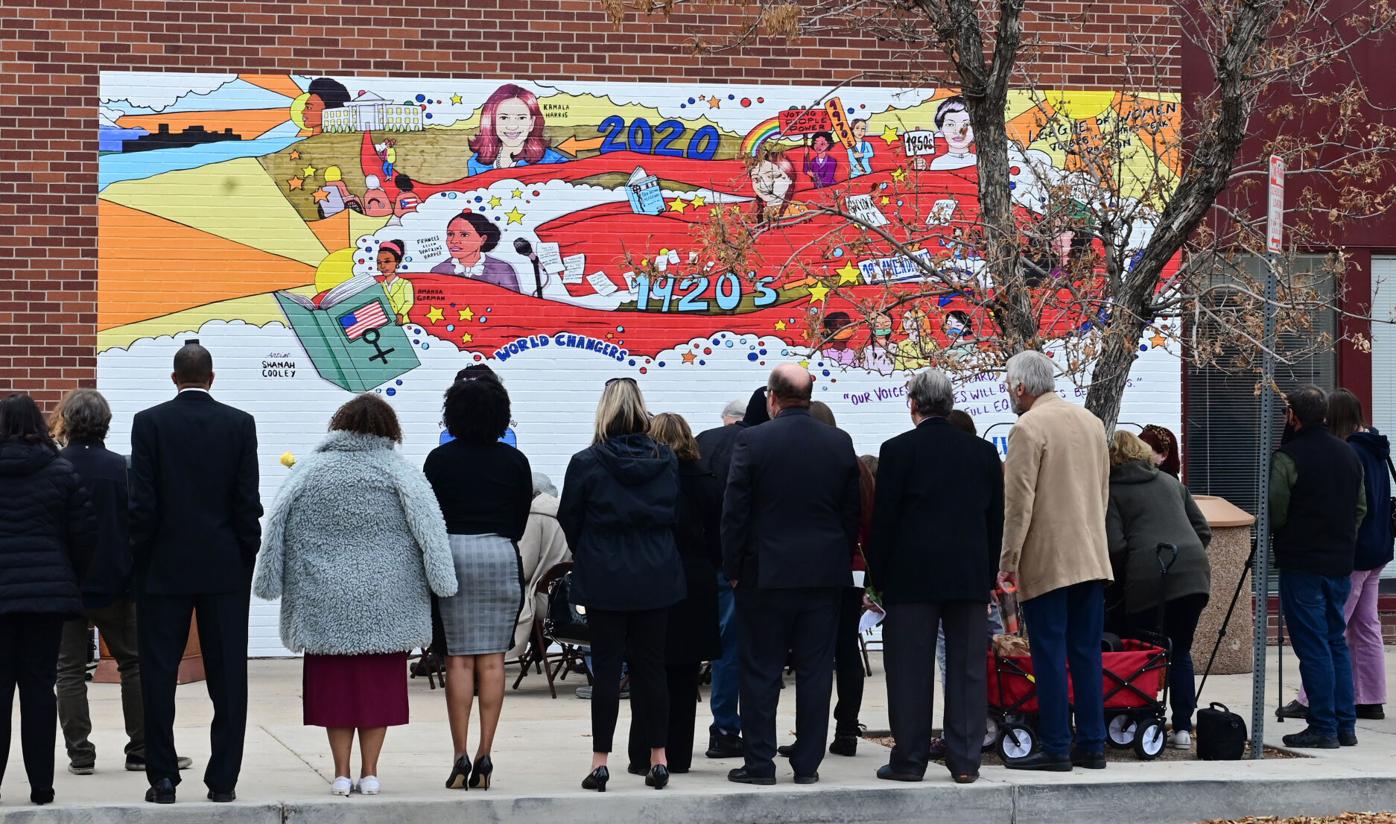 Palmer graduate Shanah Cooley was the artist. The mural was painted on vinyl, which was then attached to the building. 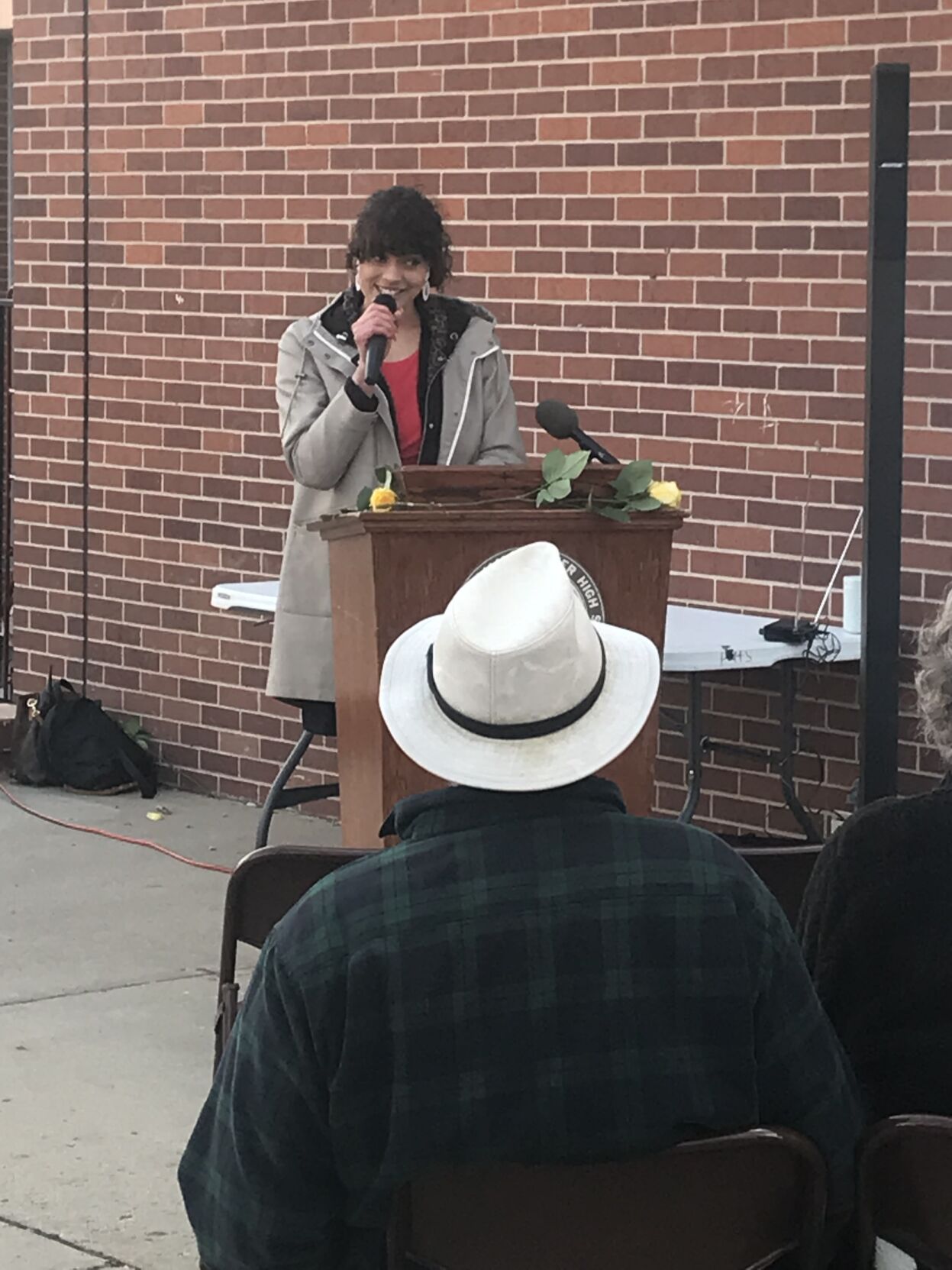 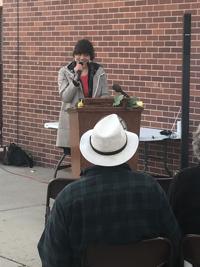 The League of Women Voters put a mural on the side of Palmer High School and held a dedication for the mural on Monday, Nov. 1, 2021. Palmer graduate Shanah Cooley was the artist. The mural was done on vinyl and then attached to the building. (Photo by Jerilee Bennett, The Gazette)

Palmer graduate Shanah Cooley was the artist. The mural was painted on vinyl, which was then attached to the building.

Colorado Springs School District 11 and the League of Women Voters of the Pikes Peak Region on Monday unveiled a mural celebrating a century of women’s suffrage.

The dedication, held in front of the mural outside Palmer High School, was a “soft opening” aimed at sparking public interest and awareness of the mural, according to league spokeswoman Shelly Roehrs. The official opening and ribbon-cutting is scheduled for Dec. 10.

“When I saw that the League of Women Voters was looking for a local artist to create a mural that celebrates the 100th anniversary of women’s right to vote, I jumped on the opportunity,” Cooley said.

The artwork features several well-known women like Maya Angelou, Ruth Bader Ginsburg, poet Amanda Gorman and Vice President Kamala Harris. It also includes a handful of names that are lesser known but were key figures in the struggle for voting rights: Zitkála-Šá, a writer and activist who fought for Native American citizenship and suffrage in the early 20th century; Angelina Grimké, who championed women’s rights in the 19th century; writer, abolitionist and suffragist Frances Ellen Watkins Harper; and Dr. Mabel Ping-Hua Lee, who led a parade in support of women's voting rights in 1912, when she was just 15 years old.

“I’m one of the privileged ones — I got the right to vote in 1920,” said Roehrs, who is white. “Other women didn’t get that right until much later.”

Vickie Tonkins, chairwoman of the El Paso County Republican Party, said she is concerned that the mural represents the advancement of a political agenda and therefore should not be on a public school.

“I probably would not have had any issue with this had it been on another building,” said Tonkins, who did not attend the ceremony. “But with it being on a school — that’s why I have the problem.”

Tonkins took particular issue with a quote featured on the mural: “Our voices will be heard, our votes will be cast, full equity lies before us.”

“That’s a talking point for Democrats,” Tonkins said of the word “equity,” which has become a central point of contention in a battle that has been raging in school boards across the country concerning “critical race theory,” a graduate-level concept not typically taught at the K-12 level. Tonkins said she believes certain tenets of the theory are making their way into local curricula.

“Some people need to look a little more closely at that word, stop being so narrow-minded and negative about it, and maybe listen to someone who doesn’t have the full equity that the white man does,” Roehrs said.

A red ribbon winds its way through the mural, mentioning the 19th Amendment, which guaranteed that “the right of citizens of the United States to vote shall not be denied or abridged by the United States or by any state on account of sex”; the Snyder Act of 1924, which granted citizenship to Native Americans born in the U.S.; and the 1943 Magnuson Act, which repealed the Chinese Exclusion Act of 1882 and allowed Chinese people already in the United States to become citizens. The ribbon morphs into a red carpet that leads a young girl toward the front door of the White House.

“Our sisters, daughters, our friends can now actually dream of pursuing any career that they want to pursue — literally any career,” Cooley said. “This mural really is representing a small portion of history in the last 100 years, but it is a history worth honoring and worth celebrating.”

The Colorado Supreme Court has approved the eight-district congressional map crafted by the state’s inaugural independent congressional redistricting commission, setting up the new map to be used for the next 10 years.