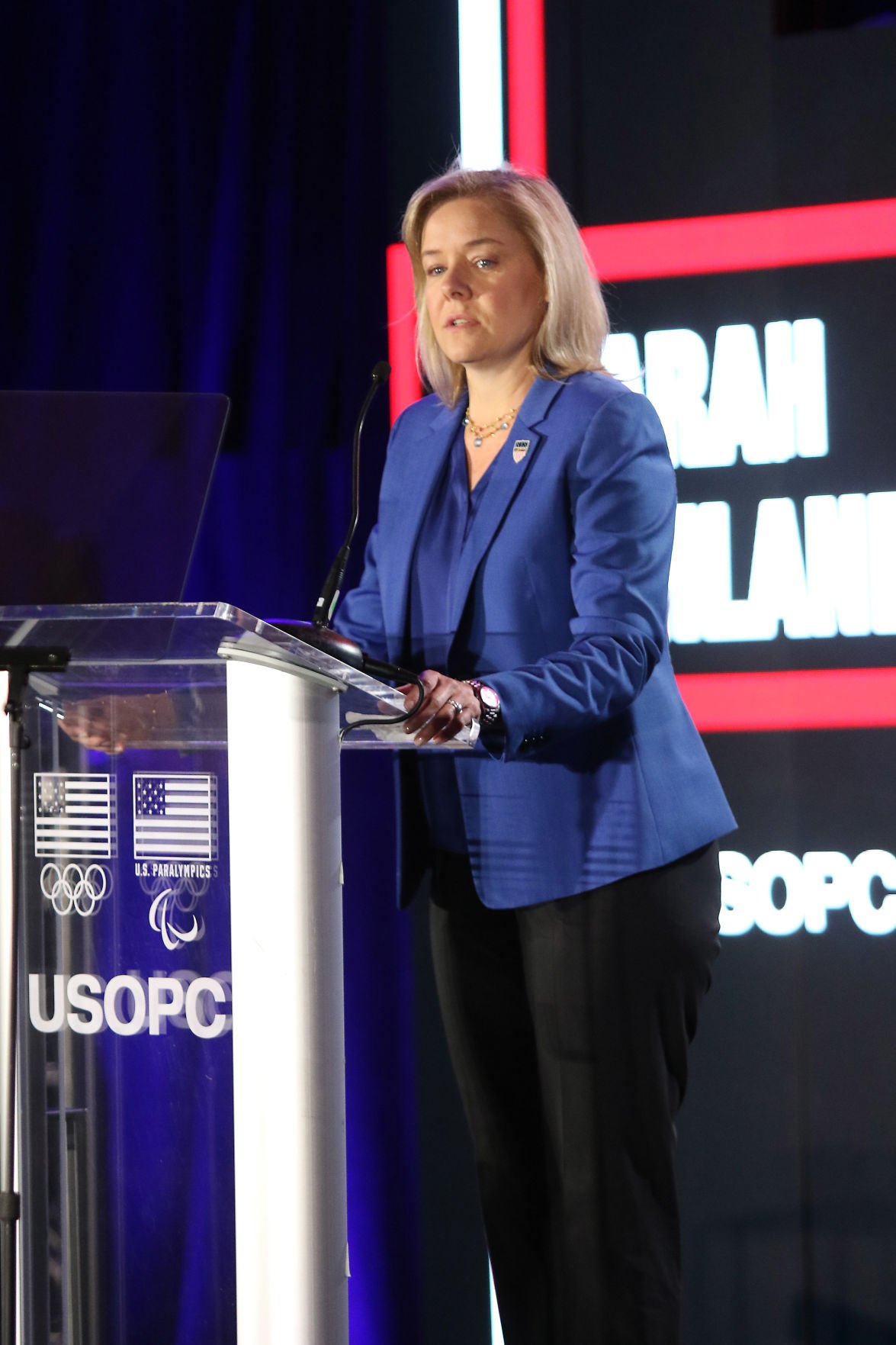 U.S. Olympic and Paralympic Committee CEO Sarah Hirshland discussed the federation’s overhaul and recovery from sex-abuse scandals in an address Thursday at the group’s annual assembly. The gathering ran through Friday at The Antlers Hotel in Colorado Springs. 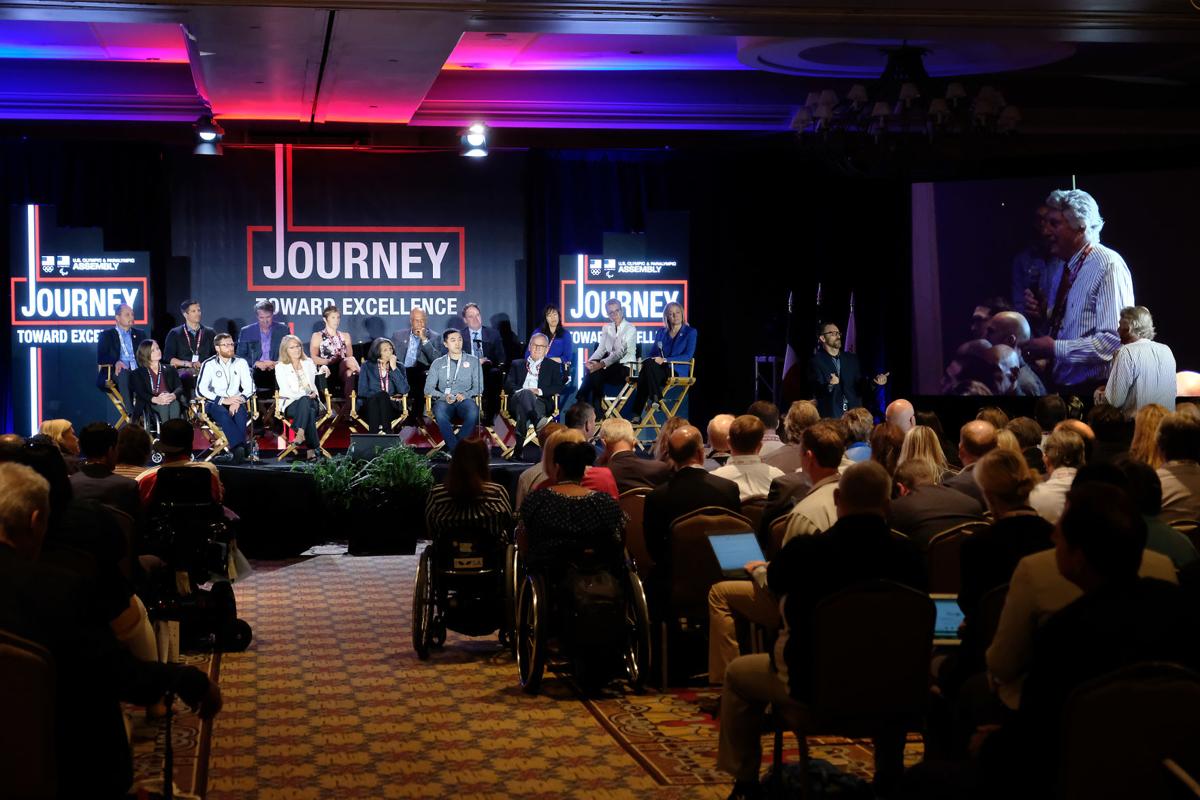 Members of the board of directors of the U.S. Olympic and Paralympic Committee take questions during a town hall session Thursday morning at the committee’s annual assembly. The gathering wrapped Friday evening at the Antlers Hotel in Colorado Springs. (Photo courtesy {span}United States Olympic & Paralympic Committee/Tom Kimmel){/span} 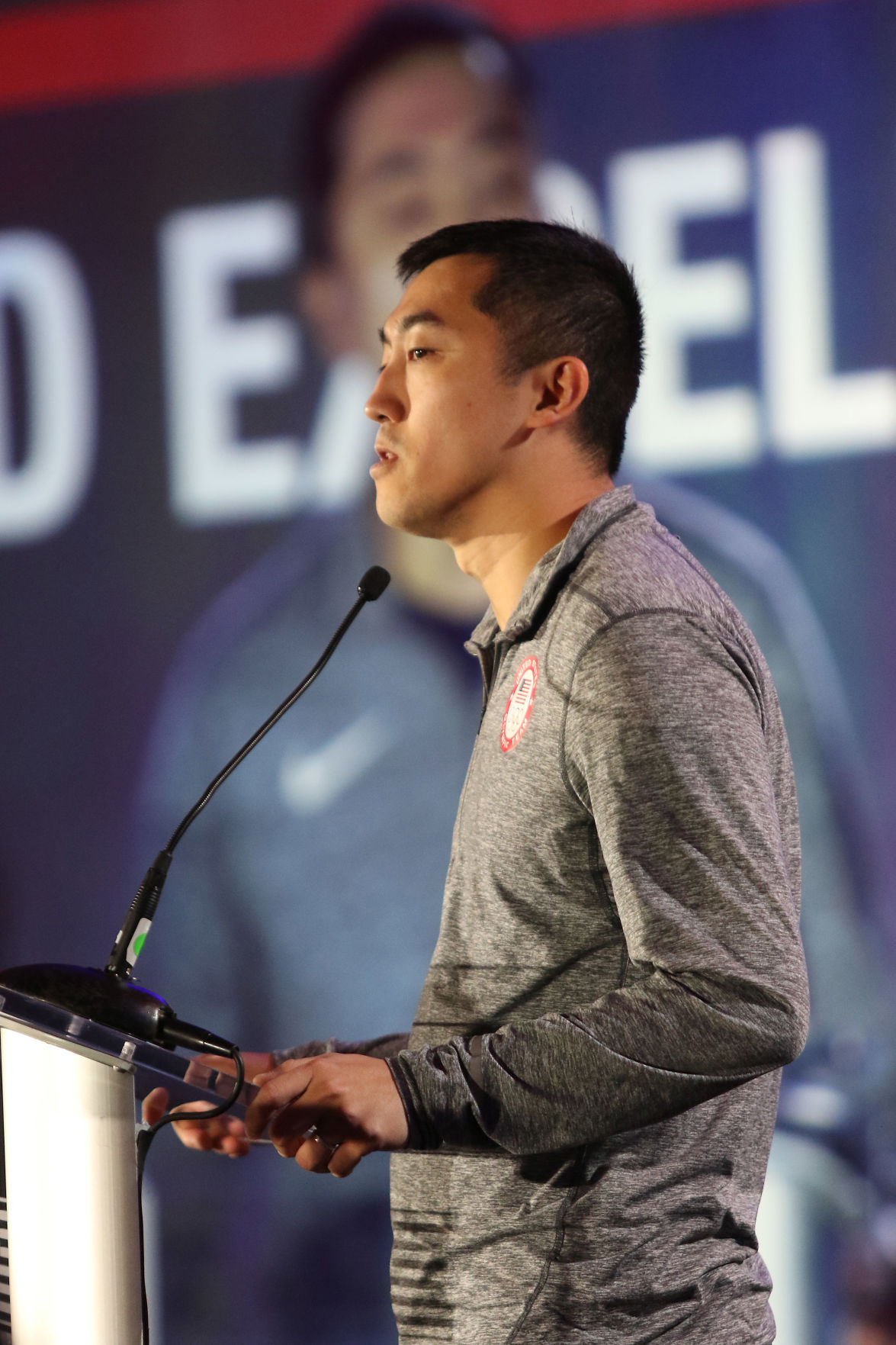 U.S. Olympic and Paralympic Committee CEO Sarah Hirshland discussed the federation’s overhaul and recovery from sex-abuse scandals in an address Thursday at the group’s annual assembly. The gathering ran through Friday at The Antlers Hotel in Colorado Springs.

Members of the board of directors of the U.S. Olympic and Paralympic Committee take questions during a town hall session Thursday morning at the committee’s annual assembly. The gathering wrapped Friday evening at the Antlers Hotel in Colorado Springs. (Photo courtesy {span}United States Olympic & Paralympic Committee/Tom Kimmel){/span}

‘We must open our ears, our eyes’

Almost three years after the sex-abuse crimes of Team USA gymnastics doctor Larry Nassar turned a damning spotlight on America’s most elite sporting brand, and a month-and-a-half after Congress introduced a bill that would revamp and infuse more federal oversight into amateur sports, U.S. Olympic and Paralympic Committee leaders took to the stage at the group’s annual assembly in Colorado Springs with messages of hope, contrition and fundamental change-in-the-works.

“Over the past year I have listened and learned many things, but perhaps none more important than the following: If our community is going to address the abuse crisis in this country, then we must start by believing those who tell us when it occurs,” CEO Sarah Hirshland told a crowd made up largely of Olympic and Paralympic athletes in a ballroom at the city’s Antlers Hotel during a conference that ended Friday.

“We must open our ears, our eyes and our minds to create a culture in sport that believes a young boy or girl, man or woman, when they try to tell us something isn’t right. Even when our own experiences might steer us to another conclusion.”

Hirshland and USOPC Chair Susanne Lyons stepped into their respective roles at the Springs-based federation about a year ago, after an executive shake-up cued by the exposure of Nassar’s gross misdeeds and a corrupted culture that allowed such atrocities to persist across seemingly the breadth of Olympic sports. The ensuing revelations — from trials, lawsuits, multiple federal inquiries and internal USOPC investigations, one dubbed the Borders report — left many questioning whether the congressionally established committee, which broadened its name to include Paralympic athletes in June, was capable of policing itself and prioritizing the interests and well-being of its most vital, and fragile, assets.

The latest shoe to drop comes from the Wall Street Journal, which reported Friday — the final day of the assembly — on multiple federal grand-jury subpoenas issued this year to entities including the USOPC and the Center for Safe Sport, the Denver-based agency the committee set up in 2017 to protect athletes and follow-up on abuse reports. The subpoenas sought more information on alleged skewed “power dynamics” and systemic failures that led leaders to turn a blind eye to “signs of widespread child abuse,” according to the Journal report.

USOPC spokesman Mark Jones shut down further inquiry and reiterated a statement issued by the committee before a media rountable with Lyons and Hirshland on Friday evening.

“Every incidence related to potential or actual abuse of athletes warrants thorough investigation. We have cooperated with all government inquiries and will continue to do so,” he said.

What is clear is that with the 2020 Tokyo Summer Games less than a year away, the USOPC continues to face cascading fallout and an internal — and national and global — audience demanding more than cheerleading from the group in charge of a tainted and billion-dollar cultural mainstay.

“I don’t need to tell any of you that it’s been a challenging couple of years, but there are still many good things happening right now, even as we enter a time of change, renewal and reform,” Lyons told the crowd Thursday.

How the group plans to achieve that “renewal and reform” is outlined in a 92-page bylaw rewrite posted to its website in August, three weeks after federal lawmakers released their strong-arm approach for a fix.

The USOPC’s plan includes a promise to add more athletes to its board and a new mission statement reflecting a focus on athlete health and safety. The proposed seachange is envisioned as a five-year plan that reflects broad input from multiple perspectives — including those of critics, Lyons said.

“We’ve worked very closely with Congress over the past year-and-a-half (and) they have, through some of their reports and many of our individual interactions, been very helpful in putting together some of their suggestions that have been coincident with many of the suggestions we’ve had from the Borders Commission and others,” she said.

“So I would say we’ve had quite a lot of outsiders who have opined on what we needed to do (and) have helped us to kind of look at what the root causes of issues are, and now the work (is to) take all of those inputs and put them into action and into plans that are practicable.”

Some athlete advocates, however, say the USOPC’s recent and proposed future steps aren’t enough. A number continue to call for a purge and rebuild of the group’s leadership — and financial — model.

“Since the Nassar revelations, starting in 2016, detailing Scott Blackmun and the USOPC Board’s willful failure to protect Olympic athletes — as a matter of standard operating procedure — the Board has been trying desperately to ‘move on,’ without changing its governance structure. Now the USOPC has released changes to their bylaws, without listening to their elected Athlete Reps, to the Borders Commission, or to Team Integrity, an active group of more than 250 Olympians and Paralympians, experts and survivors,” three-time Olympic swimming gold medalist Nancy Hogshead-Makar, now CEO of Champion Women, said in an email. “This fundamental USOPC failure to listen to and respect athlete-leadership is even inconsistent with the goals stated in the release itself, to become an ‘athlete first’ nonprofit.”

The Colorado Springs-based USOPC oversees national governing bodies for Olympic and Paralympic sports, 20 of which are based in the Springs. By years’ end, that number will rise by one: USA Diving has announced plans to move its national office to the Springs from Indianapolis where it’s been based since 1981.

The committee’s power over sport in America is broad. And its critics want broad, sweeping change.

“Board members were complicit in the prolific sexual abuse happening in the Olympic Movement; and yet here they are writing demonstrably athlete-last bylaws,” Hogshead-Makar said. “I didn’t need another reason to repeat myself but here it is; the USOPC Board must resign.”

Colorado will halt its use of QR codes on ballots, citing concerns over the potential for hostile actors to manipulate voting data.