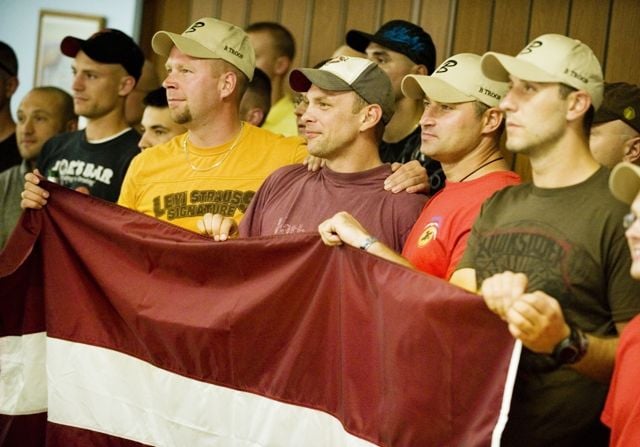 Sgt. Eric Harder, third from right, held a Latvian flag Sunday along with Latvian soldiers, from right, Cpl. Martins Dabolins, Sgt. 1st Class Janis Lakis and Capt. Agris Liepins as the Latvians reunited with some of the 4th Infantry Division soldiers who served alongside them in Afghanistan. Photo by Mark Reis, The Gazette 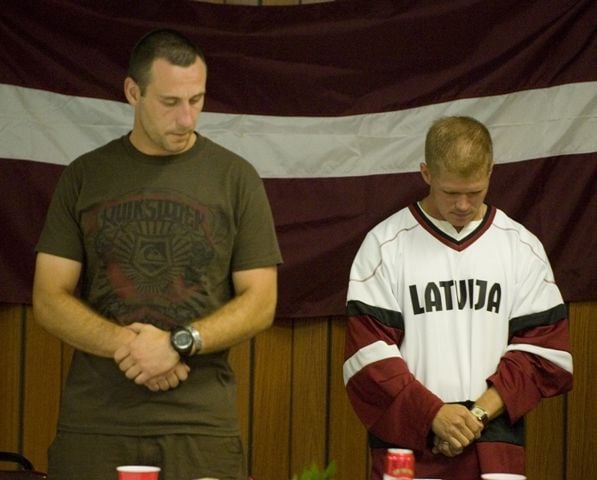 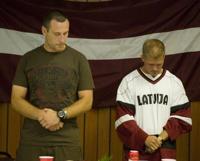 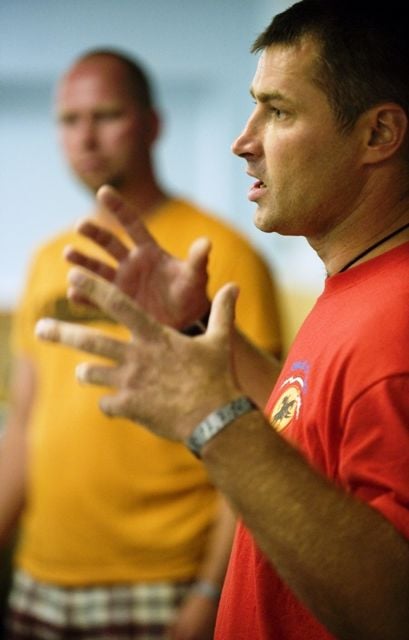 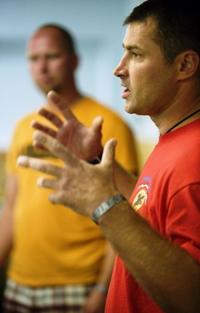 Sgt. Eric Harder, third from right, held a Latvian flag Sunday along with Latvian soldiers, from right, Cpl. Martins Dabolins, Sgt. 1st Class Janis Lakis and Capt. Agris Liepins as the Latvians reunited with some of the 4th Infantry Division soldiers who served alongside them in Afghanistan. Photo by Mark Reis, The Gazette

Sgt. 1st Class Janis Lakis woke up at 5:30 a.m. on Oct. 3, 2009, sipped some coffee and waited patiently to train Afghan soldiers, a routine set to begin in just an hour.First, though, came the mortars, the screams of attack and the sight of shells exploding like popcorn.Nearly 10 months after the deadliest battle in 2009 for U.S. forces in Afghanistan, the two Latvian soldiers who fought there, along with their commander, reunited with their “American brothers” on Sunday, sharing their stories to attentive family members and quietly remembering those who lost their lives that autumn day.Gathering at VFW Post 3917 in Security with friends and family — many from the northeastern Europe country — Capt. Agris Liepins led many of the roughly 100 people in attendance in the singing of the Latvian national anthem.Then, he asked everyone to stand silently as they remembered the eight Fort Carson soldiers  killed in the attack.“On that day, we were family, we were brothers and everybody fought for each other,” Sgt. Ty Carter said.In the months leading up to the battle, Americans had been tasked with running reconnaissance missions in northeast Afghanistan, providing intelligence on the enemy Taliban forces, Capt. Stoney Portis said.The Latvian soldiers’ mission was to train the more than 100 Afghan troops and act as mediators between U.S. and Afghan forces.On Oct. 3, 2009, however, roughly 350 enemy fighters — more than five times the number of U.S. troops on hand — stormed Combat Outpost Keating, near the Pakistan border.Afghan soldiers fled the compound, Portis said, leaving the U.S. soldiers and their two Latvian counterparts to fend off the attack for an hour and a half before helicopters and jets arrived.Even then, the battle raged on for more than 10 hours, Portis saidWith little time to think, Lakis and a fellow Latvian soldier Cpl. Martins Dabolins evaluated their choices, remembering all along of their nearby “American brothers.”“In that case, it’s only one decision: It’s stay and fight,” Dabolins said.Lakis grabbed his weapon while Carter and Dabolins — both snipers — worked together to protect their fellow troops by having one person serve as the eyes and the other pull the trigger, then switching.When the battle was finished, 80 percent of the compound was destroyed, leaving only three buildings standing in the center of the complex.But everywhere Sunday, the U.S. and Latvian troops shook hands, sipped a cold beer together and mingled with their families, all the while thanking each other for making sure no one else died that day.And only a month removed from returning to the United States, the meeting had a way of capping their long and bloody tour in the war-torn country.Wearing a white and maroon Latvian hockey jersey, Portis offered one last compliment.“The last thing I’m going to do is get into a fight with a Latvian or American,” he said.