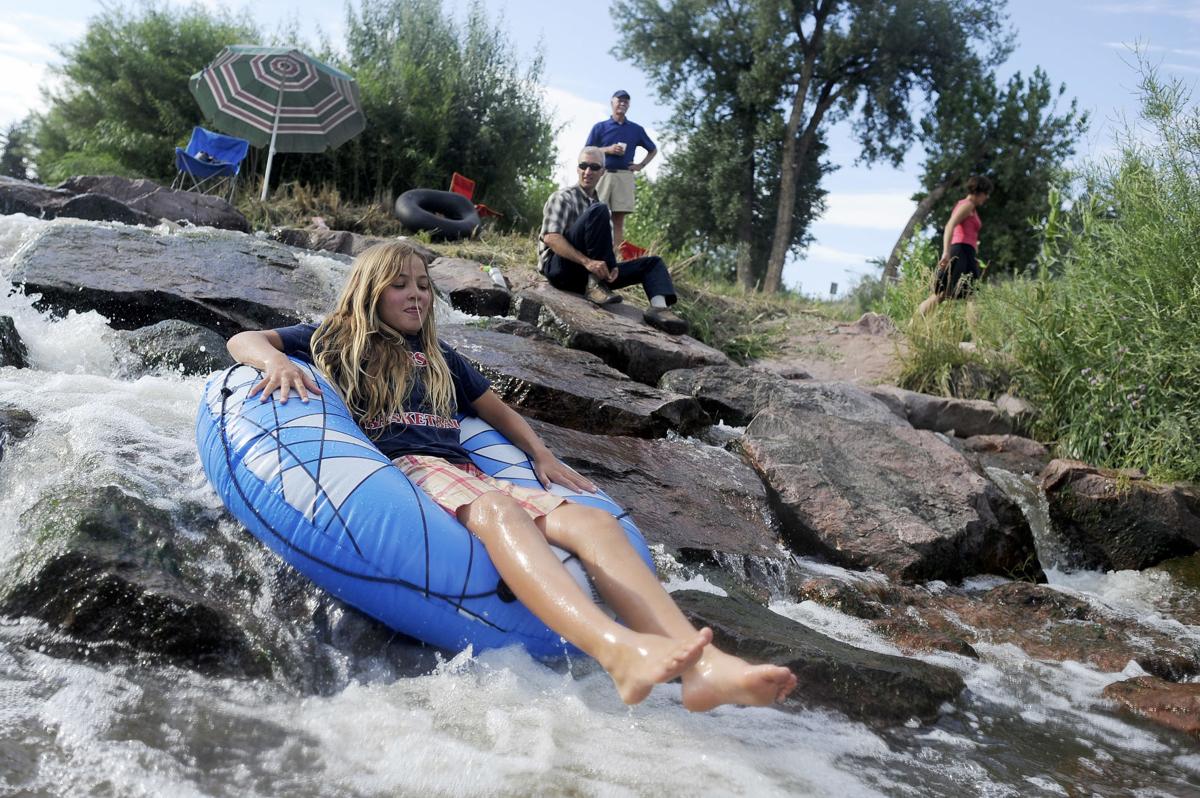 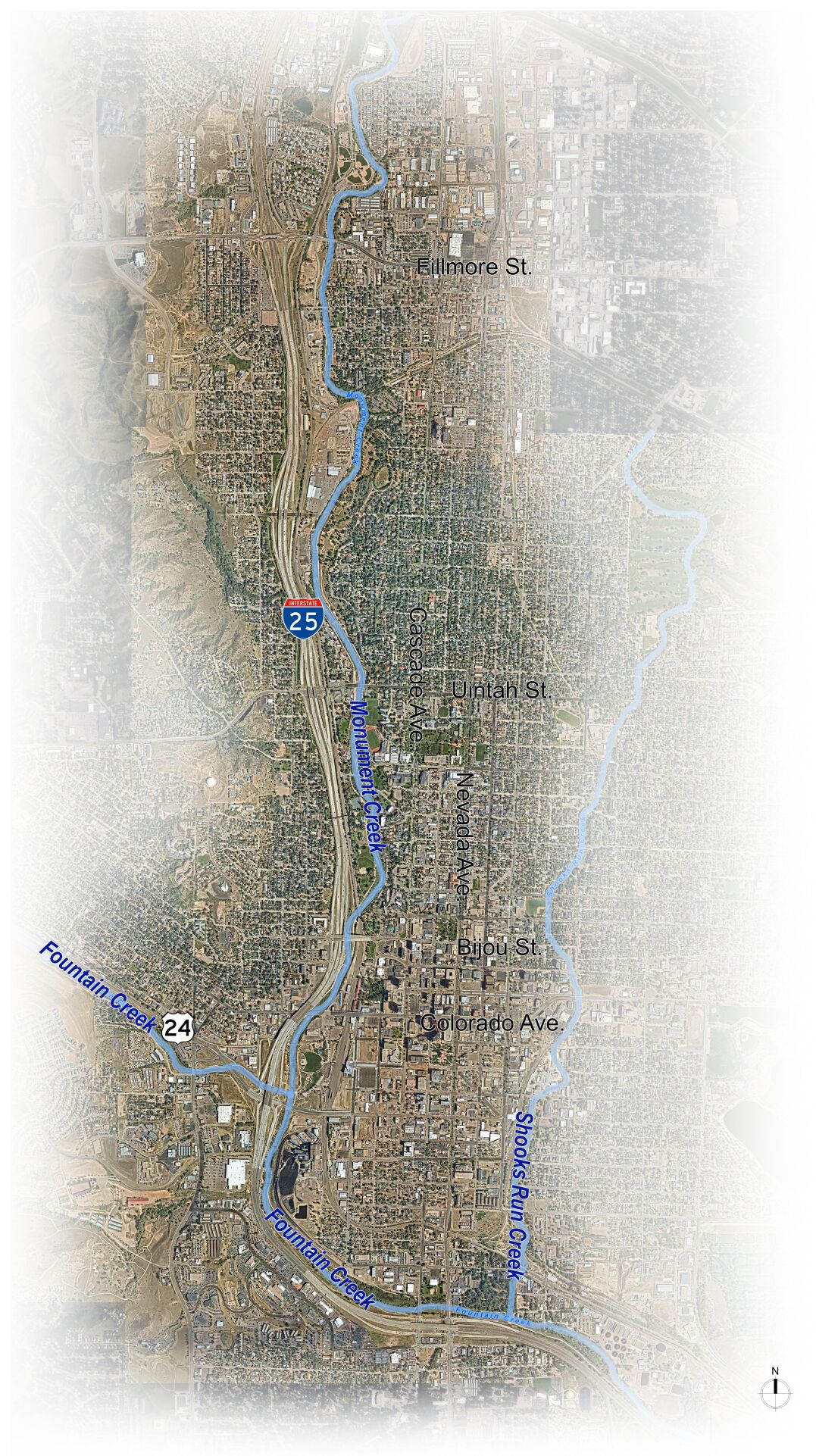 The planning effort will focus on the stretches of Monument and Fountain creeks depicted.

A privately funded group wants to re-envision how residents could gather along and play in Monument and Fountain creeks near downtown Colorado Springs.

A new year-long planning effort to write the Fountain Creek Watershed Vision and Implementation Plan will be funded by Lyda Hill Philanthropies and will focus on Monument Creek from the Popcycle Bridge in Monument Valley Park to its confluence with Fountain Creek at Cimarron Street and then focus on the Fountain Creek until it reaches at Dorchester Park near South Tejon Street.

The plan would outline how to improve the greenway's ecosystem, recreation potential, development opportunity and infrastructure, said Chris Lieber, with NES Inc., a company working on the project.

The planning effort along about 7 miles of waterways is expected to be more holistic than planning efforts in the past and will help shape the future of the corridor as the Martin Drake Power Plant is set to be decommissioned by 2023, he said. Most of the property included in the study is publicly owned, he said.

"These kinds of opportunities are almost once in a generation to put a big vision on the table," Lieber said.

The Greenway Foundation, a Denver-based nonprofit, expects to help lead the project and hopes to recreate some of the same success it had along the South Platte River and Cherry Creek, said Jeff Shoemaker, executive director. The South Platte River had seven dump sites along it as well as problems with raw sewage and paint pollution, he said. Now it draws people to kayak, fish and go tubing.

The problems facing Monument and Fountain creeks, such as sedimentation, make them look like "candyland" compared to the conditions along the South Platte River, he said.

"Fountain Creek is just an absolutely untapped jewel in terms of its potential," Shoemaker said.

The plan will identify five or six projects that could be completed along the waterway and as well as funding sources, he said. The planners expect to work with funders over the next year to ensure they support the ideas, he said.

If the projects can draw more people to the creeks it will naturally make the areas feel safer, he said. Tracts along Fountain Creek, in particular, have been a hotspot for homeless campers for years.

"Eyes and ears on your waterway is your first step," he said.

The planners expect to work closely with the city on plans for the creeks, because features to control stormwater can also serve recreation and the ecosystem, Shoemaker said.

The city is already planning a few projects in or near that area, including one in Fountain Creek next to the Drake power plant, that could fit into the new plan, said Richard Mulledy, Stormwater Enterprise manager for the city.

The city's stormwater control projects have shifted over the last 15 to 20 years from hard structures, such as concrete channels, to more natural features, like streamside willows and areas where the water will naturally pool, he said. Where possible, the city stormwater features can draw residents down to the creek, such as large streamside boulders, he said.

The city's focus on rebuilding more natural creeks, is a welcome change for Dave Leinweber, owner of Anglers Covey Fly Fishing Shop. He remembers when the creeks were treated more like drainage ditches and culverts. He expects improving the 7 miles of waterway will be challenging, especially because of sedimentation, but it could be a great recreational area, he said.

"Wouldn’t it be great 10 years from now if people could go flyfish that creek?" said Leinwber, chair of Pikes Peak Outdoor Recreation Alliance.

Planners expect to involve residents in the new plan, but opportunities for input haven't been announced.

I spent some languorous late-summer hours up in Salida last weekend at the Boathouse Cantina, part of which hangs over the Arkansas River, and…