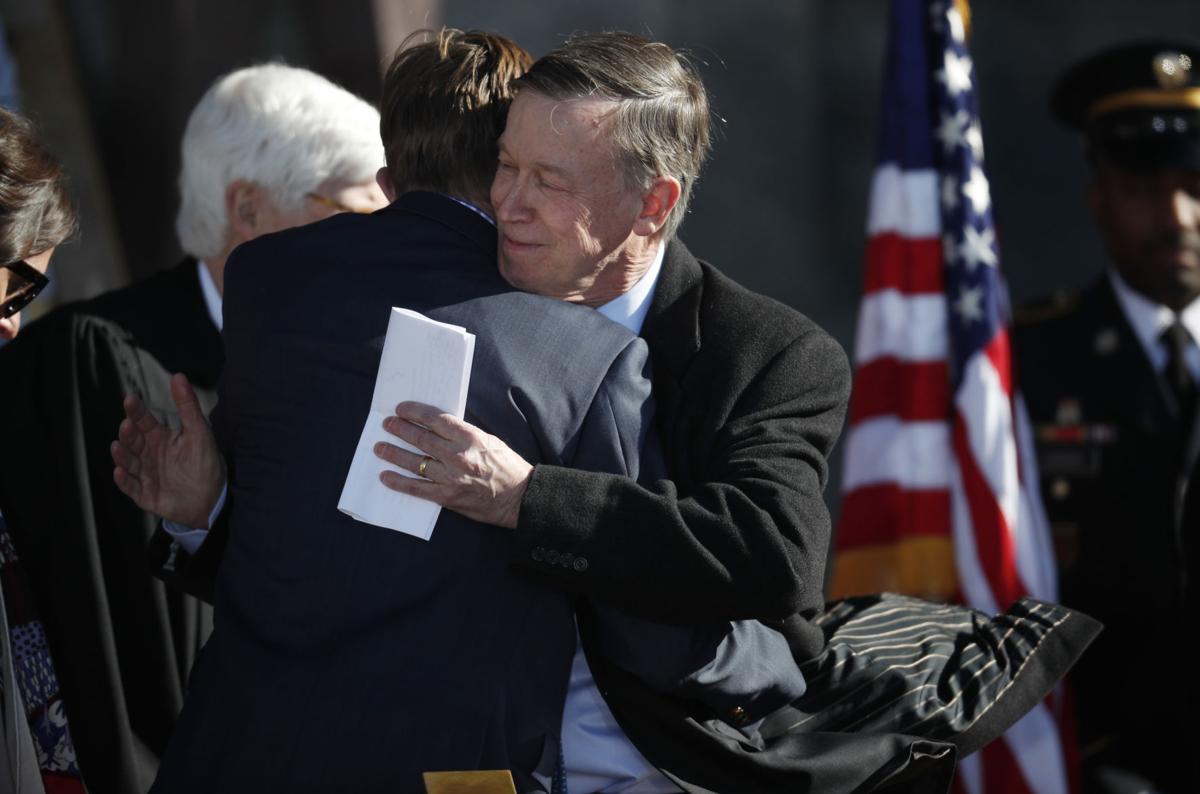 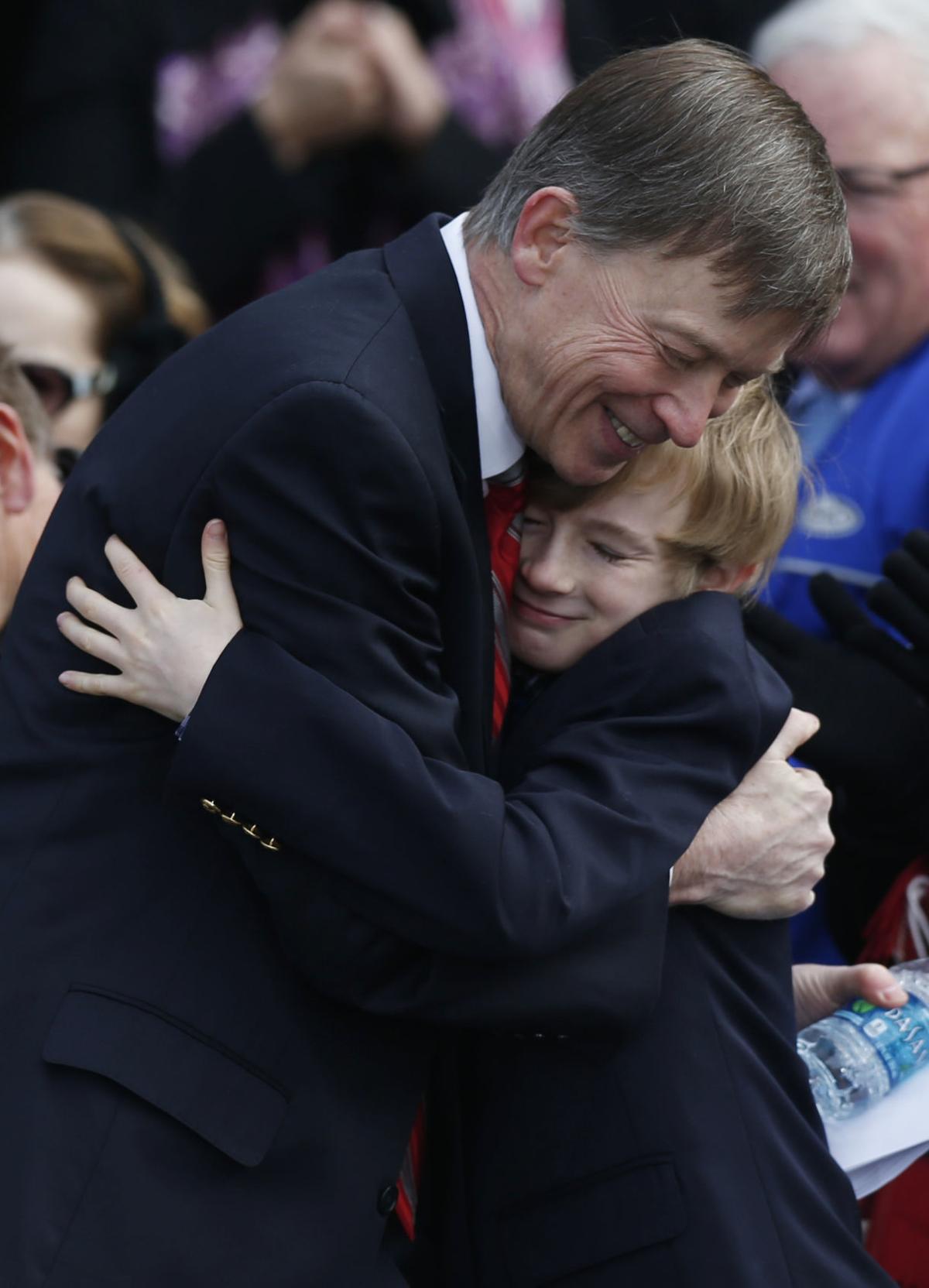 Colorado Gov. John Hickenlooper, left, is hugged by his then-12-year-old son, Teddy, after making his first speech of his second term in office during inauguration ceremony on the west steps of the Colorado State Capitol, Tuesday, Jan. 13, 2015, in Denver. 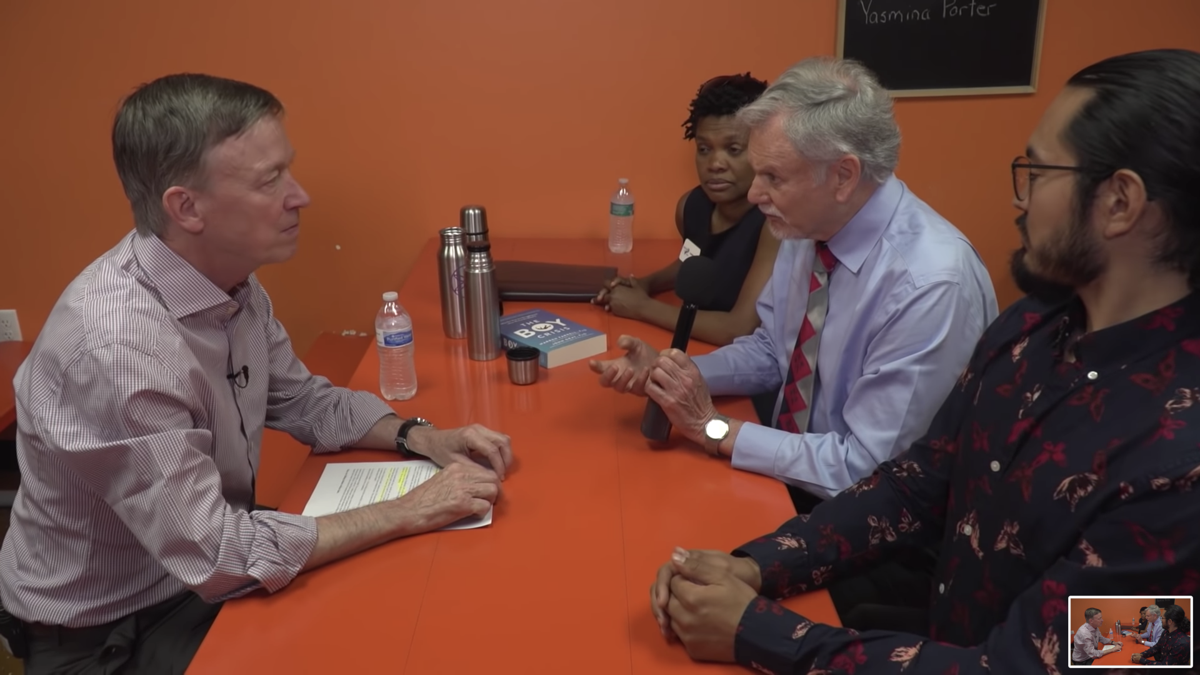 Former Colorado Gov. John Hickenlooper, at left, speaks to Warren Farrell, in the center at right, while campaigning in Iowa in June.

Colorado Gov. John Hickenlooper, left, is hugged by his then-12-year-old son, Teddy, after making his first speech of his second term in office during inauguration ceremony on the west steps of the Colorado State Capitol, Tuesday, Jan. 13, 2015, in Denver.

Former Colorado Gov. John Hickenlooper, at left, speaks to Warren Farrell, in the center at right, while campaigning in Iowa in June.

If former Colorado Gov. John Hickenlooper becomes president, his administration will have a White House Council on Boys and Men.

He said so when he met in Iowa with Warren Farrell, the author of the 2018 book “The Boy Crisis: Why Our Boys Are Struggling and What We Can Do About It.” Dottie Lamm, the former first lady of Colorado, suggested Hickenlooper read it.

The premise Farrell laid out to Hickenlooper in Iowa in a video on Farrell's YouTube channel is that boys are a neglected entity in society, and society, families and men eventually pay a steep price for that. Farrell and Hickenlooper agreed that what America has is a crisis-level shortage of men doing the job of father.

It's good advice to address some of the ills of society by focusing on the future and the men (and women) who will lead it. But Farrell is much more to Hickenlooper, including a political asset. And Hickenlooper's capitalistic pragmatism might put him at an uncomfortable arm's length from the  wing of his party that's more attuned to identity politics.

Farrell was part of the 1970s feminist movement and served on the New York City governing board of the National Organization for Women. His eight books sell well, and he’s a in-demand lecturer on relationships.

“In fact, he is a very important figure in the cultural history of the late 20th and early 21st century if only because of that extremely important insight concerning male disposability, a topic which runs through ‘The Boy Crisis’,” according to a Psychology Today profile last year.

Farrell told Hickenlooper that the vast majority of men in prison and boys who become mass shooters are “father-deprived.” Hickenlooper raised a son, Teddy, while serving of mayor of Denver for eight years and governor of Colorado for eight more, spanning two marriages.

Hickenlooper's father died when he was 8 years old in 1960. Hickenlooper says he grew up an awkward boy with no self-confidence. Though he was a good talker and loved sports, he didn't like the way he looked. He couldn’t bear to look at himself in the mirror to comb his hair or tie a tie, so he learned how to get by without looking at his reflection.

Men in his life stepped up -- his grandfather, a couple of uncles, a sixth-grade teacher named Mr. Miller who “took the time to kind of talk to me and went out of his way,” the governor recalled. His best friend’s father, a cigar-smoking factory worker who dyed fabric, always bought the future political leader a gift at Christmas, something a boy would like, because he knew Hickenlooper didn’t have a father.

Those were the men who taught Hickenlooper how to be a father and how to be a man, and there aren’t enough of them today willing to help young boys along a path away from trouble.

Hickenlooper drifted astray from the topic in his conversation with Farrell, as he is prone to do, to tell a story that's too good not to repeat here.

When he was a kid, he played Wiffle Ball with the Baird brothers down the street all summer long. Sometimes Hickenlooper would seek to negotiate new rules -- like, if the wind was blowing in, then hitting the ball into the hedge should be a ground-rule triple instead of double.

Today one of those boys, Douglas Baird, is a professor at the University of Chicago School of Law. The former Colorado governor said his old friend brings up Hickenloopholes when he talks about contract law, about how different words mean different things to different people.

“I tried to play down the Hickenloopholes business when I was somebody in government,” Hickenlooper said. “We don’t believe in loopholes.”

He likened the White House Council on Boys to President Kennedy’s Council on Physical Fitness, another initiative Hickenlooper would like to re-energize.

He showed his Colorado roots, turning to the outdoors.

“The outdoors is a powerful connector for fathers and kids, whether it’s going out hiking or bicycling, all those outdoor activities are a great way to transcend that generational divide,” Hickenlooper told Farrell.

And it doesn’t have to cost a lot of money, he said. Raising awareness is the goal, not a costly mandate.

“I think you’d get the payback a million times,” he said.

But Hick’s not thinking small.

“These symbolic things don’t have to have a big government bureaucracy,” Hickenlooper said. “All they have to do is try to have roots that go out to these states, every county, every municipality to build awareness more than anything else.”

Government will always be on the periphery of the relationships within families, but there are things government can do in certain circumstances.

For instance, when he was governor, Colorado prisons would work to reduce child-support payments to what an inmate could afford, because his administration wanted to help fathers stay connected to their kids.

Child support was an extra barrier imposed by the courts, Hickenlooper said. Fathers also got priorities on job training, he said.

Farrell agreed with those approaches, especially that they would save society misery and taxpayers dollars by helping boys mature into productive young men with more encouragement and better male role-models.

And that's not a Big Government concept.

Democratic sources tell Colorado Politics that none of the Hickenlooper staffers was fired, stressing that the shuffle amounts to a campaign reset.

INSIGHTS | The best of Joey Bunch

Here's a look back at Joey Bunch's Insights columns for Colorado Politics from recent months.

As the president ramps up his reelection campaign, his son Donald Trump Jr. will be in Denver this weekend.