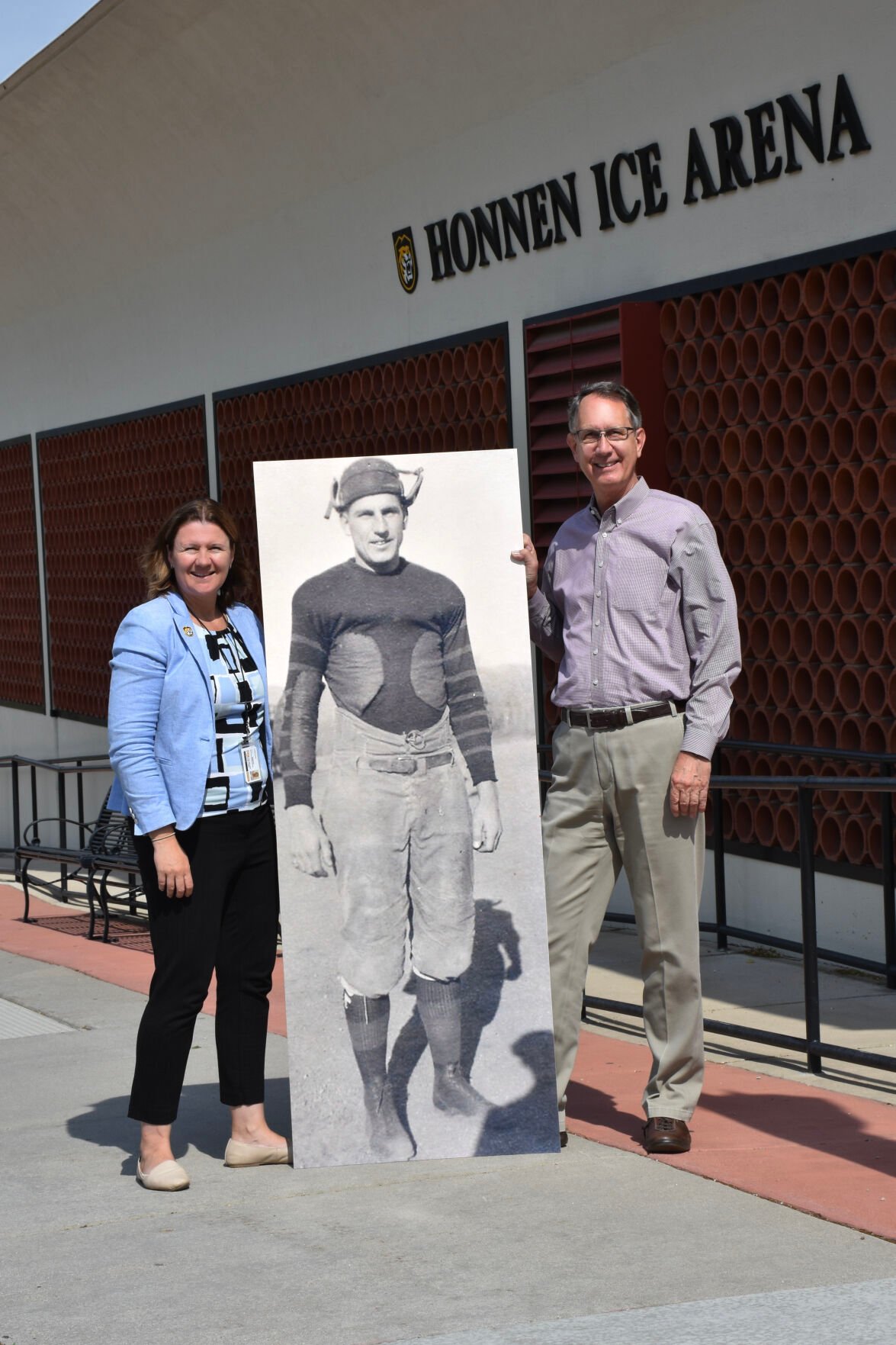 Colorado College Athletic Director Lesley Irvine and R. Thayer Tutt Jr. hold a cardboard image of Edward Honnen in his Colorado College football uniform that had been hanging inside Honnen Ice Arena. Campus officials are closing the ice rink and turning it into space for an arts program. (Courtesy photo/Melani Tutt) 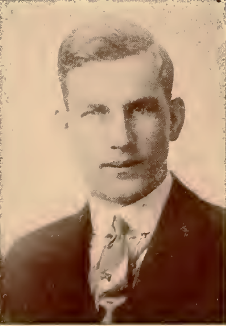 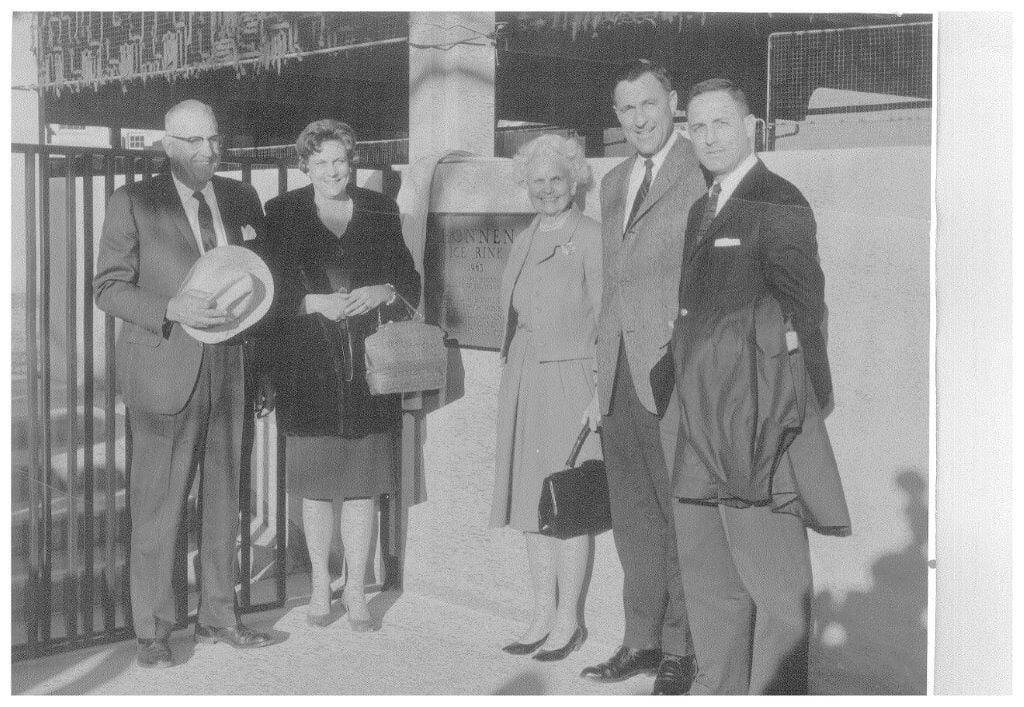 Colorado College Athletic Director Lesley Irvine and R. Thayer Tutt Jr. hold a cardboard image of Edward Honnen in his Colorado College football uniform that had been hanging inside Honnen Ice Arena. Campus officials are closing the ice rink and turning it into space for an arts program. (Courtesy photo/Melani Tutt)

Edward Honnen didn’t play hockey, but when Colorado College leaders decided nearly 60 years ago that they needed an on-campus ice sheet for team practice, Honnen handed over $750,000 for an open-air rink to be built.

It was a lot of money for Honnen, said his grandson, R. Thayer Tutt Jr., vice chairman and chief investment officer for El Pomar Foundation.

Minimum wage was $1.25 an hour when construction started in 1963, and the average cost of a new home was $19,300, according to historical accounts.

But the generous donation was typical for the unpretentious philanthropist who made his money moving dirt, first with horse-drawn implements and then with heavy motorized equipment, as technology advanced.

Honnen — a 1921 Colorado College graduate who sat on the school’s governing board as an alumni trustee from 1946 to 1950 and as a charter trustee from 1960 to 1983 — was a true cowboy who “loved the traditions of the American West,” Tutt said.

As his wealth grew from clearing land for development such as Camp Carson and selling Caterpillar and John Deere equipment, the rugged outdoorsman financially backed his passions.

“My grandfather was a champion of sport and thought public art was important,” Tutt said. “He did things quietly for the community.”

One of his notable gifts now is fading into history.

Thursday was a sad day for Tutt, one of Honnen's nine grandchildren, as he retrieved items signifying Honnen’s heritage.

A life-size cardboard image of his grandfather in his Colorado College football uniform had hung on a wall inside the rink for decades. Tutt also kept two plaques marking major renovations to the building, which Honnen also funded.

A bronze plaque dated 1963 on a wall on the east side of the building lists Edward Honnen, his wife, Margaret Eppich Honnen, and their three children, Earle and Pete Honnen, and Louise Honnen Tutt. Louise was Tutt’s mother.

The building will remain known as "Honnen," said Stephanie Wurtz, assistant vice president for communications. At some point, the words "Ice Arena" will be removed from the sign, she said.

But recognition of Honnen’s contributions will live on, Wurtz said, in the new Edward Robson Arena, which is nearing completion a few blocks to the east.

The Honnen History Wall will wrap around the second-floor club level seating of the multi-purpose arena, which will become the new home of the Tigers hockey team in the fall.

The tribute will include Honnen’s biography, and the story of college athletics will play out on the wall, emphasizing sporting successes over the college’s 147-year history.

College Athletic Director Lesley Irvine said the old ice arena has "such a tremendous amount of history associated with it" and "we look forward to honoring the history as well as building new traditions."

Honnen, the son of German immigrants who in the late 1800s landed in Pueblo, broke his nose so many times playing college football that it had a predominant crook.

He left college to enlist in the military during World War I, but fighting had ended by the time he was activated, Tutt said.

That wasn’t the case during World War II, when as a Naval civil engineer Honnen designed the D-Day landings on Omaha Beach during the 1944 Battle of Normandy, Tutt said.

Honnen, pronounced with a short "a" sound, not a long "o," had a gruff personality, Tutt said, but loved his family and Colorado.

He raised and raced quarter horses on his Quincy Farm in south Denver, which became the origin of Quincy Avenue. The old ranch is now part of the Cherry Creek subdivision.

“One of his great failings, he used to tease, was that his grandson is scared of horses,” Tutt said.

At a summer camp in 1969, Tutt got stuck with a horse that hated flies and would roll over whenever he felt bothered.

“I got real good at jumping off as the horse went down,” Tutt said, “and I vowed never to ride a horse again.”

That was disappointing, Tutt said, to Honnen, who loved competing in rodeo events. In 1983 he won the world championship title in team roping in the “over 60” division, adding another belt buckle to his vast collection from winnings.

He donated his personal Western art collection in the 1970s to the city, which now is on public display at the Colorado Springs Fine Arts Center at Colorado College.

Honnen also built the outdoor sculpture garden in front of the museum because he thought it needed “a grand entrance,” Tutt said, and he commissioned the bronze sculpture of a gold miner on West Cimarron Street, beckoning travelers heading to Cripple Creek.

“He was a big believer in public art,” Tutt said. “He didn’t advertise it, he didn’t like self-promotion. It was just something he did for the community.”

On a family side note, Tutt’s paternal grandfather — Charles Leaming Tutt Jr., also is a familiar name around the Colorado College campus. The campus library is named after him, along with the alumni house and the science building.

Honnen Ice Arena at Colorado College to close for good, as meltage begins this week

Bleachers, scoreboard, side boards, refrigeration system and other equipment from Colorado College in Colorado Springs, which last month began dismantling its 55-year-old Honnen Ice Arena, have found a new home in southern Colorado.