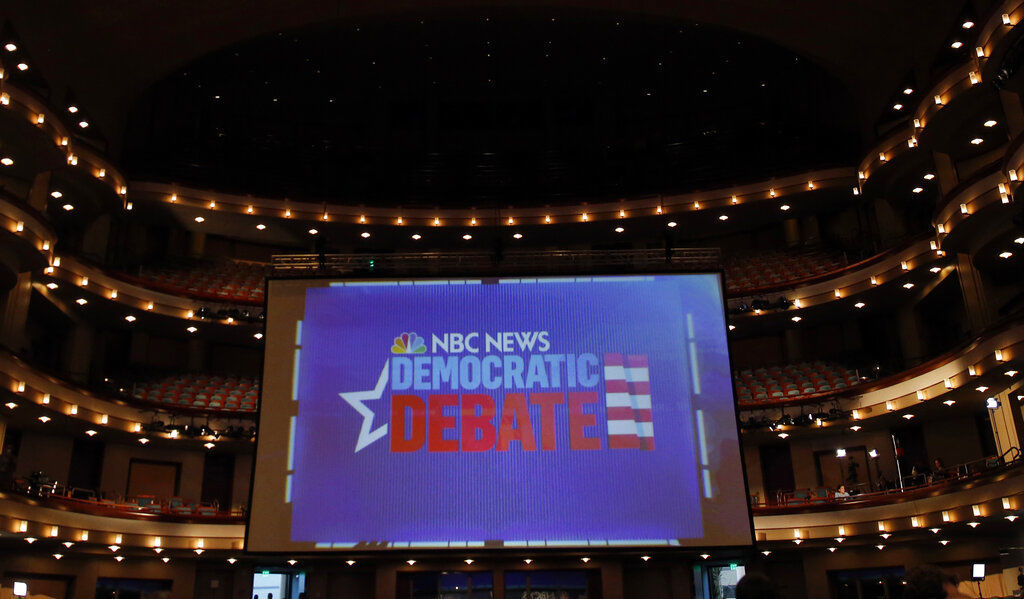 A large screen is displayed inside the media room at the Democratic primary debate hosted by NBC News at the Adrienne Arsht Center for the Performing Art, Wednesday, June 26, 2019, in Miami. (AP Photo/Brynn Anderson) 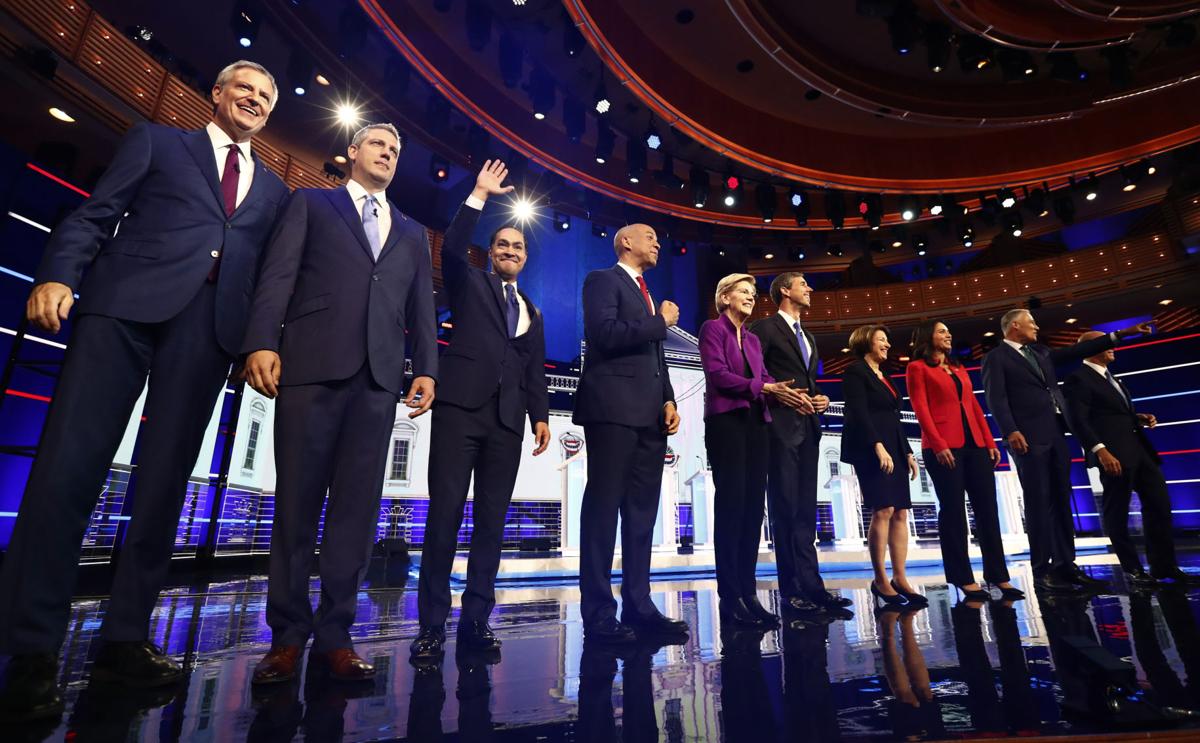 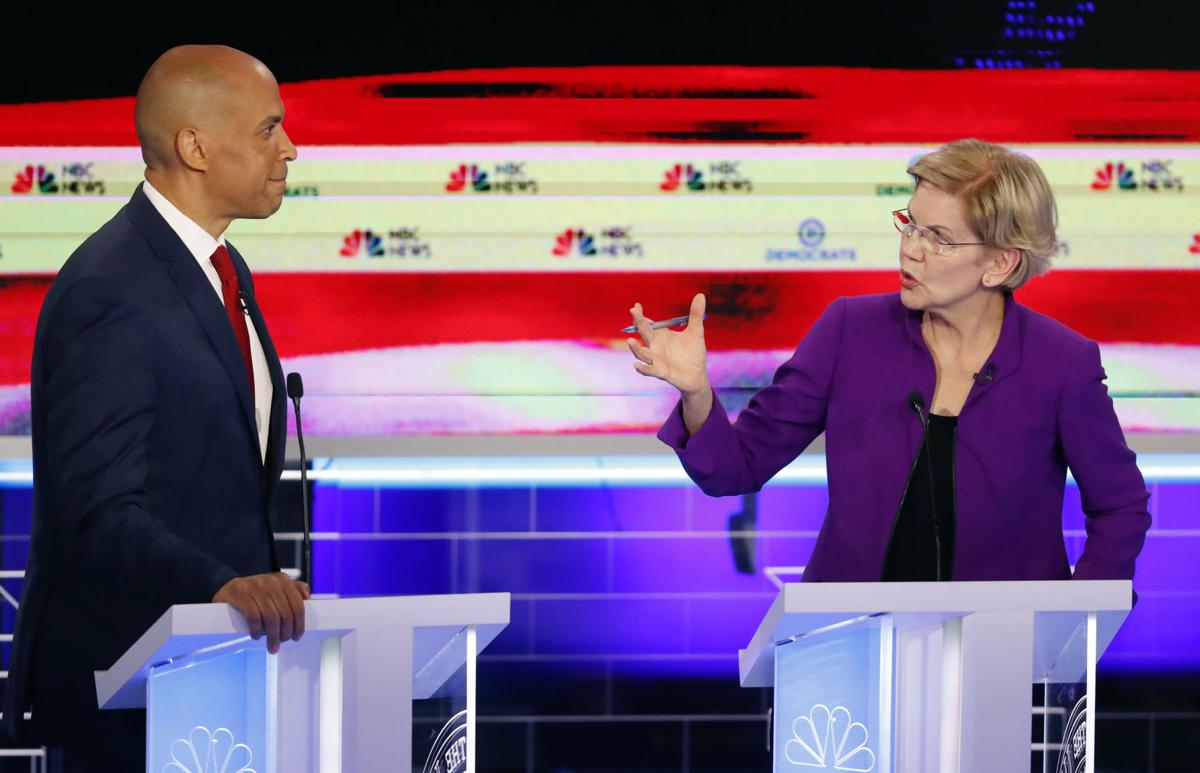 A large screen is displayed inside the media room at the Democratic primary debate hosted by NBC News at the Adrienne Arsht Center for the Performing Art, Wednesday, June 26, 2019, in Miami. (AP Photo/Brynn Anderson)

Stay with ColoradoPolitics.com and Gazette.com for more coverage from tonight's debate.

MIAMI — The two Coloradans seeking the 2020 Democratic presidential nomination get their minutes in the spotlight Thursday night at the second of two nationally televised primary debates in this city.

John Hickenlooper, a former two-term governor, and Michael Bennet, Colorado's senior U.S. senator, will have the chance to make their pitches to voters along with eight other candidates, including early polling frontrunners former Vice President Joe Biden and U.S. Sen. Bernie Sanders of Vermont, and a passel of Democrats who have been nipping at the septuagenarians' heels.

Thursday's debate also features U.S. Sen. Kamala Harris of California and Pete Buttigieg, the 37-year-old mayor of South Bend, Indiana, who have both flirted with double-digit support in some polls.

NBC is carried on KUSA-9News in Denver and KOAA-News5 in Colorado Springs. Telemundo is carried by KDEN in Denver, on digital channel 29 and virtual channel 25.

Candidates qualified for the first round of debates by meeting polling or fundraising thresholds set by the Democratic National Committee.

The candidates will be arranged on stage according to their support in public opinion surveys, with Biden and Sanders center-stage, flanked by Harris and Buttigieg.

The two Coloradans, who have been stuck at or below 1% in most polls this year, will be standing near the edges on Thursday night. Hickenlooper, on the left, will stand between political novices spiritual advisor Marianne Williamson and entrepreneur Andrew Yang. Bennet will stand on the other side of the stage, next to U.S. Sen. Kirsten Gillibrand of New York and U.S. Rep. Eric Swalwell of California.

If Wednesday's free-wheeling debate is any guide, each candidate will get between five and 10 minutes of speaking time.

Hickenlooper said Thursday he intends to talk about what his administration was able to achieve in Colorado without "a massive expansion of government or socialistic policies" — continuing the criticism he's leveled at Sanders, who calls himself a democratic socialist.

"I plan on being myself and talking about how we made Colorado the most progressive state in the nation — with near universal healthcare, the strictest restriction on methane emissions in the country, and tough gun laws that include universal background checks and limits on high capacity magazines," Hickenlooper said on an "Ask Me Anything" session on Reddit.

"I will also note that we did not get there through a massive expansion of government or socialistic policies — we got there by bringing people together — nonprofits and business, Democrats and Republicans, urban and rural communities — to find progressive solutions to our toughest problems."

Bennet told Colorado Politics he hopes to distinguish his experience while making a case for a series of government reforms he's made central to his campaign.

"We're all going to be on the stage together — the rules apply to all of us equally, and I think it's an opportunity for me to be able to demonstrate that, unlike any other candidate standing on that stage, I have experience in business, I have experience at the local level running a billion-dollar school district, and I've spent 10 years in the Senate, which is long enough time to figure out how to get things done but also long enough to understand why it doesn't work on so many fundamentally important issues that we have to [tackle]. And frankly, there's nobody else on that stage that can say that," he said in an interview Wednesday.

The debate — spread out over two nights to accommodate the crowded primary field — is the first of six the DNC has said it plans to sponsor this year. Moderators are NBC’s Lester Holt, Savannah Guthrie and Chuck Todd, along with MSNBC’s Rachel Maddow and Telemundo’s José Díaz-Balart.

Takeaways from the Democratic presidential debate

MIAMI — Democrats hoping that Wednesday night's first presidential debate of the 2020 campaign would be clarifying probably came away disappointed. There were no major stumbles but few standout moments as 10 candidates vied for the nation's attention.