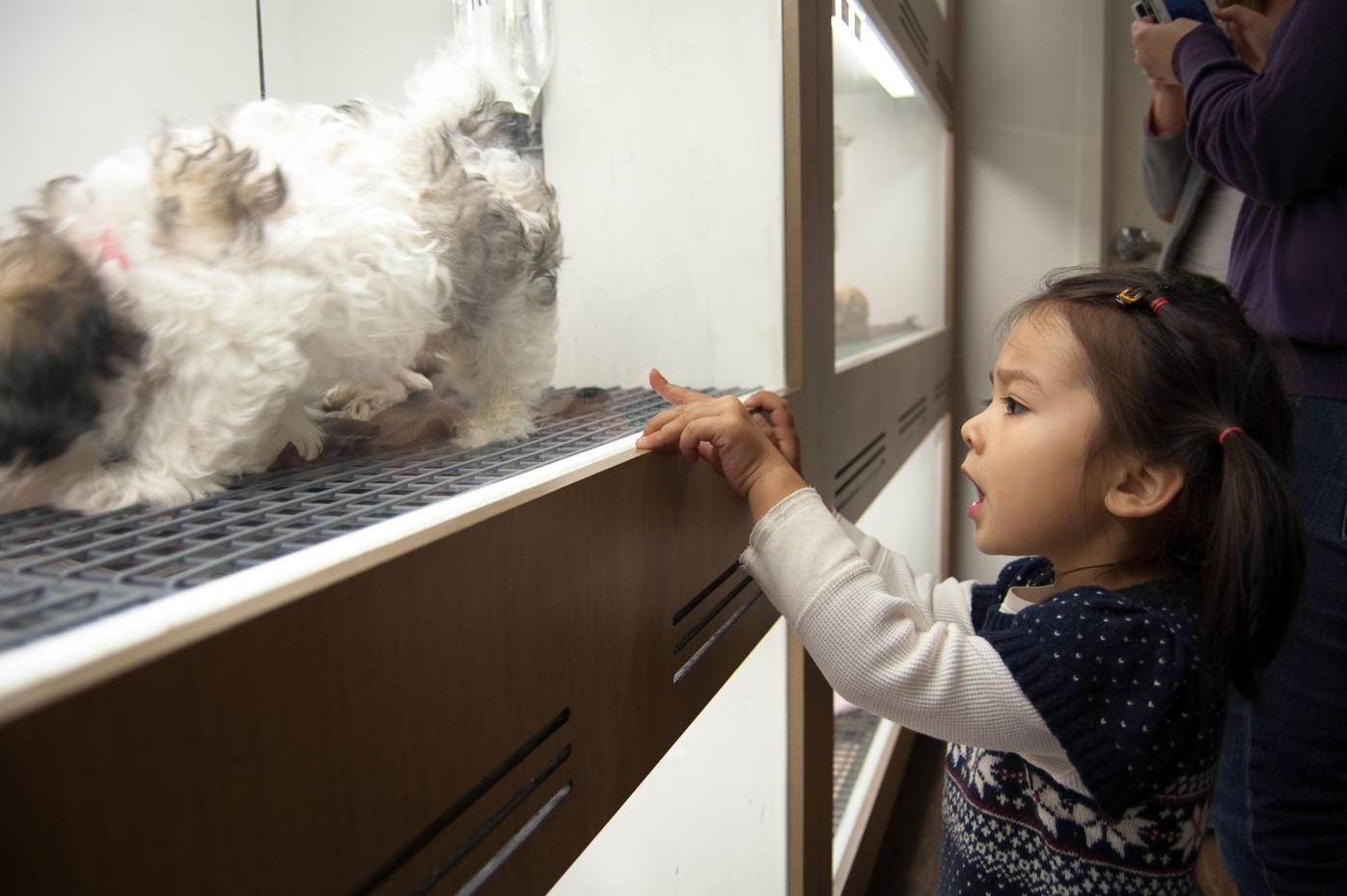 The Colorado Springs City Council agreed to explore rules Monday that aim to restrict the sales of puppies and kittens from breeding mills in shops. 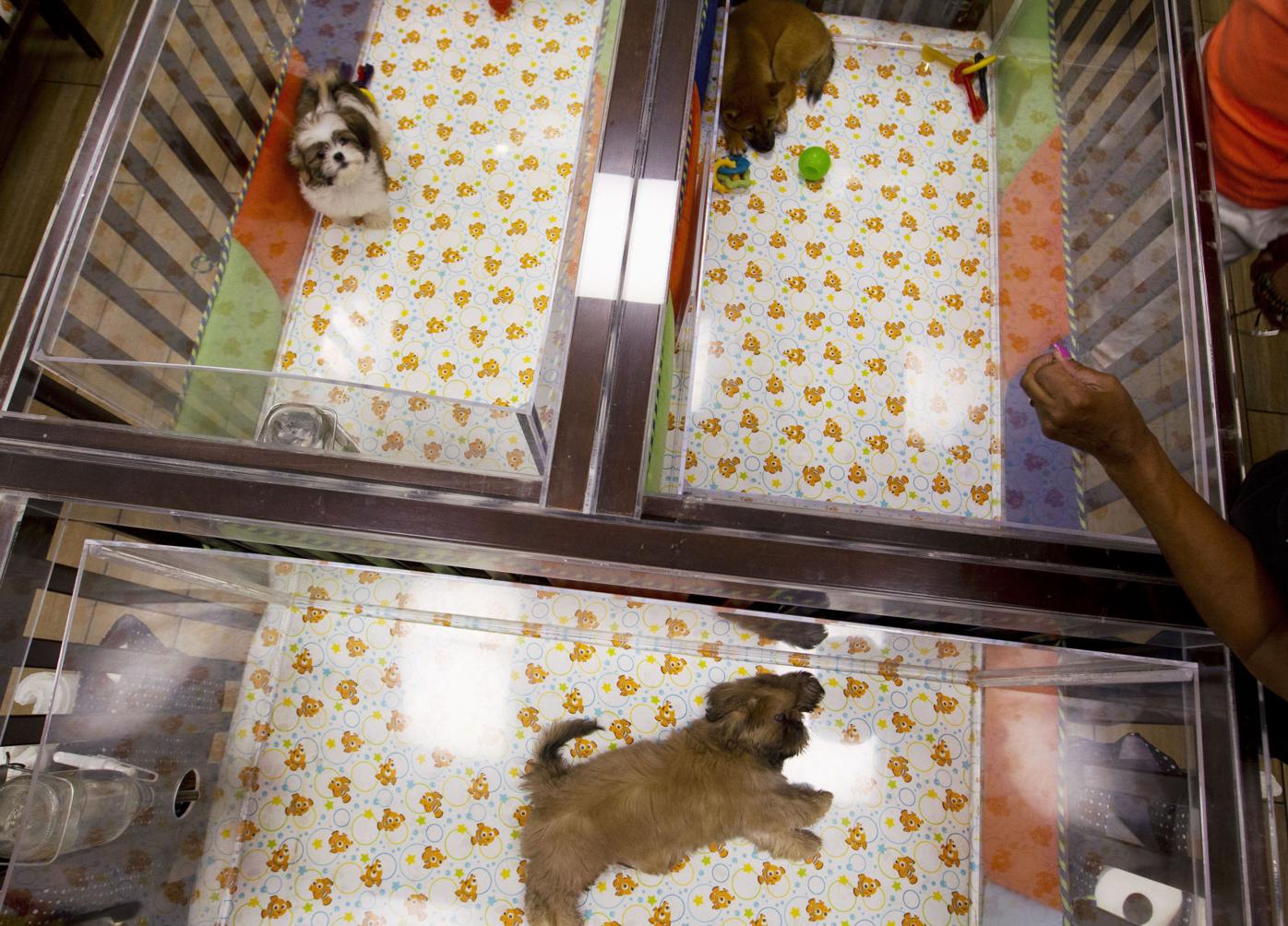 People watch puppies in a cage at a pet store Monday in Columbia, Maryland. The owners of Pet City stores in Colorado Springs and animal-rights activists say they are working on a compromise after facing off in front of the Colorado Springs City Council over a possible ban on commercially raised dogs in stores.

The Colorado Springs City Council agreed to explore rules Monday that aim to restrict the sales of puppies and kittens from breeding mills in shops.

People watch puppies in a cage at a pet store Monday in Columbia, Maryland. The owners of Pet City stores in Colorado Springs and animal-rights activists say they are working on a compromise after facing off in front of the Colorado Springs City Council over a possible ban on commercially raised dogs in stores.

Animal-rights activists seeking to ban two Colorado Springs pet stores from selling puppies say they are on a path to a compromise with the store owners.

"All parties involved want to put in the effort to see if a compromise is something that can be done," said Vicki Allinger of Bailing out Benji, a nonprofit that works to shutter puppy mills.

At a contentious meeting Monday, two advocacy groups called on Colorado Springs City Council to ban the sale of puppies in pet shops because they argue the stores financially support large puppy mills in other states and that cutting off those sales helps close mills.

Pet City owners Bree Maestas and Dustin Haworth countered the dog breeders they work with are reputable and regularly inspected. The two Pet City shops they operate are the only retail businesses licensed to sell puppies in Colorado Springs.

Rather than wade into the argument , city council members  asked the two sides to work with a mediator, potentially provided by the city, to come to an agreement that would protect dogs from mistreatment. The  council members also asked the business to respond in writing to claims by advocates that they work with breeders who have violated U.S. Department of Agriculture regulations.

The groups didn't push for a ban on kitten sales because Pet City stores obtain their kittens from the Humane Society of the Pikes Peak Region and not from breeders.

Both sides of the debate say they hope they can reach a compromise that will protect pets.

Allinger said she would like to see Pet City stores post on each animal enclosure the name of the animals' breeders and the breeders' license numbers so that anyone can research the breeders' history.

"We want to verify that they are sourcing from humane breeders," she said.

Pet City store owners Maestas and Haworth said posting breeder information on animal kennels might be problematic because of the potential for backlash against breeders.  But they would be open to working on increasing transparency about breeders in general.

Customers purchasing a puppy can currently request breeder information and the Pet City stores are required to disclose it, Maestas said.

The pet store owners said they are preparing a  a response to claims they work with problematic breeders .

Drawing on Department of Agriculture records, activists told the council that Pet City breeders had unsafe and unsanitary conditions, including wires poking into kennels, poor medical care and a buildup of dog feces.

"We have  (raised) our standards in-house and those of our breeders," Haworth said.

Amy Jesse, puppy mills policy director for the Humane Society of the U.S., was among those  asking the council to consider a ban. She said her organization generally opposes all dog sales in pet shops.

"An 8-week-old puppy does not belong in a pet store," she said.

But Jesse said she would be willing to work on a compromise that could avoid a ban.

"If the council isn’t prepared to make the move that we feel will be most effective, we can look at a middle ground," she said.

The Humane Society of the U.S. was among the groups advocating for a proposed state ban on puppy and kitten sales at stores that died in committee this month. While House Bill 1084 started out as  a potential ban, it was amended to require stores to use state-licensed breeders, limit the number of litters per dog and ensure animals are treated humanely, Colorado Politics reported.

Jesse didn't know  if a similar ban proposal would be reintroduced next year. But she said citywide bans  provide a strong foundation for a potential state ban. More than 340 local governments have banned pet shops from selling puppies and kittens, and California and Maryland enacted similar bans, Jesse said.

If a compromise can't be reached , some city council members seemed interested in hearing from advocates again and considering action.

"If puppies are being harmed, I just think that is a really important issue to the community," Council President Richard Skorman said.

Electric scooters could be zipping along Colorado Springs' bike lanes and some sidewalks this summer.