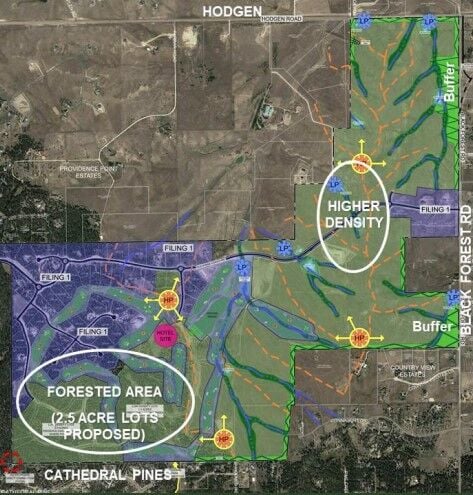 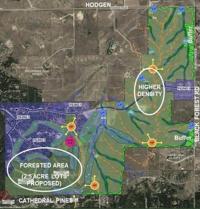 A map of Flying Horse North provided to El Paso County shows how the layout of the proposed community. 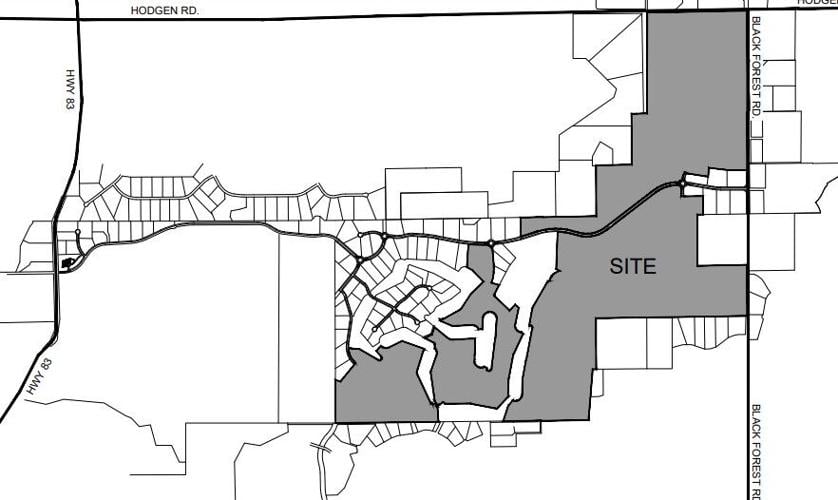 A plan to add hundreds of homes and a luxury hotel to Flying Horse North took a big step forward Tuesday.

The El Paso County commissioners voted 3 to 1 to approve a sketch plan for major changes for the future of about 912 acres southwest of Hodgen and Black Forest roads. The approval allows Elite Properties of America, and Flying Horse Country Club to go forward with plans to add 644 more homes to a plan approved several years ago that could bring the community up to 846 homes. The new plan also includes a luxury hotel with 225 rooms and 50 additional rentals, such as stand-alone casitas on about 60 acres. Developers will need to clear additional stages in the approval process before going forward with plans.

Commissioners Carrie Geitner and Cami Bremer spoke to the importance of respecting private property rights ahead of their votes in favor of the development. Geitner also expressed concern that if property was annexed by Colorado Springs the density could be higher. They also found that the plan was in general conformance with the county's master plan, a major point of contention among the neighbors.

Commissioner Stan VanderWerf, who also supported the project, said it was one of the largest and most contentious he had ever worked on and there is room for change ahead of construction.

"I encourage the developers to continue to work with the neighborhood," he said.

Commissioner Longinos Gonzalez opposed the project saying the hotel was not in conformance with the master plan, a point confirmed by El Paso County planning staff.

"If we are not going to follow it ever, why do we have it?" he said.

Commissioner Holly Williams recused herself from the hearing because she had a conversation that she felt could effect her ability to vote fairly on the matter. She represents the district where the project is planned.

During a hearing that ran into the evening, numerous residents argued the hundreds of homes and hotel do not comply with county's master plan for the Black Forest area that calls for large residential lots and that it would bring an incompatible density to the area. The residents also raised concerns about water supply for the future homes. The developers do not have to prove long-term water quality and quantity at this stage in the approval process, although they do need to show probable water supply, county staff said.

Terry Stokka, president of Friends of Black Forest, said he heard from nearly 700 residents who are opposed to the development for numerous reasons.

"It simply puts too much stress on a place in the Black Forest, in a place that was not intended for it," Stokka said.

Phil Stuepfert, with HR Green, said developers revised their plans for development to help address residents' concerns by reducing the number of homes, eliminating plans for attached homes, such as townhouses, and placing large lot homes on the edges of the development. In addition, all of the home sites within forested area will be 2.5 acres, he said.

"We built in the compatibility on the edges of our property," Stuepfert said.

The denser properties, less than an acre, would be internal to the site and the hotel would be close to the golf course well away from neighbors, he said. On average, the project will be .6 units per acre. The developers also plans to set aside about 22% of the property as open space, he said.

Some residents who opposed the project bought land in Flying Horse North after it was originally approved by the county in 2016 with only 283 lots and said they felt misled about the developers' true intent.

Stuepfert presented a statement given to original property buyers that stated greater density and a hotel was possible if the property was annexed into the city.

Doug Stimple, CEO of Classic Homes, who was not asking for the sketch plan change Tuesday, explained developers were interested in annexation into Colorado Springs, but there is no path forward for annexation at this time unless an agreement with Pueblo changes. He spoke up because he is partnered with company asking for the sketch plan change. Classic Homes will also likely build in the area.

Plans for possible annexation and densification were shared in an effort to be transparent, Stimple said.

Residents were well organized in their opposition pointing out how the developers plans did not align with other subdivisions in the area.

"Clearly the proposed density of one lot per acre does not match the existing character of the surrounding developed communities," said

She also pointed out that the luxury hotel is not consistent with the commercial development called for in the master plan for this area.

"What is the purpose of having a master plan if we don’t abide by it?" Correa said.

Other residents raised questions about where the water to support the development could come from and how it could place pressure on existing groundwater supplies.

The Cherokee Metropolitan District is interested in providing water to the development, but it does not have adequate capacity or infrastructure currently, El Paso County staff wrote in their report. The district could also provide waste water services.

Stimple also pointed that it is not usual for water providers to not have all the water needed to serve neighborhoods at full build out. For example, Colorado Springs Utilities does not have all the water to serve all the property in the city, he said. Other members of the development team said they also are in negotiations with other water districts in the are to provide water.

VanderWerf said the county has one of the strictest water policies in the state and the developer will have to meet those rules before construction can begin.

He also noted that concern ahead of major projects is quite common.

"If we only built in communities where they invited us in, we would never build," he said

Colorado Springs is working to close a gap, nicknamed "No Man's Land," between the existing city boundary and Manitou Springs along West Color…