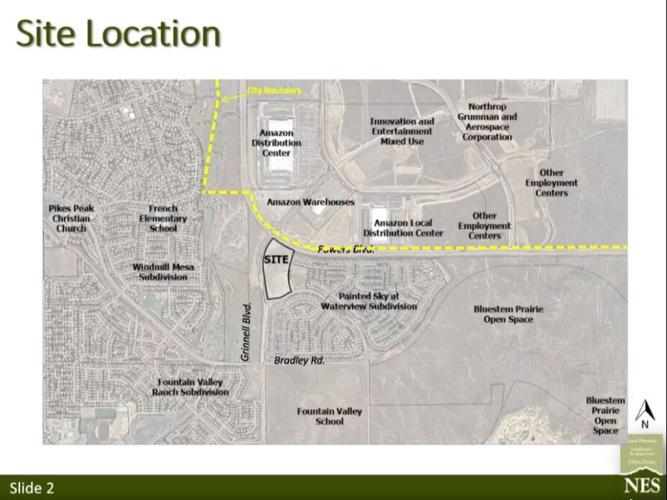 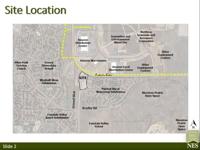 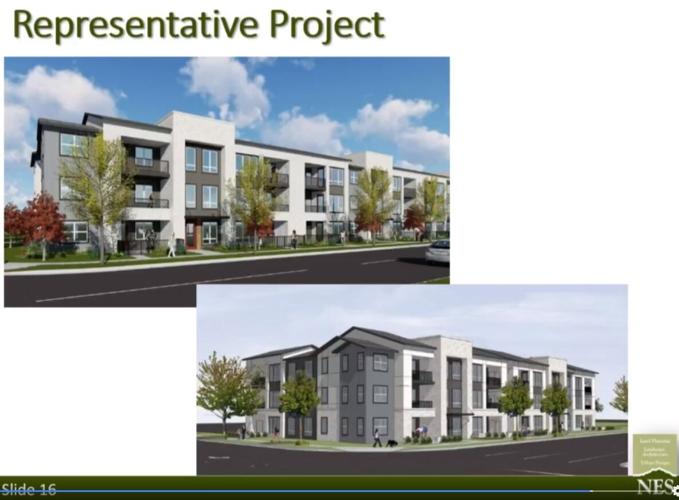 A rendering of what the proposed multifamily unit buildings will look like at the southeast corner of the intersection of Powers and Grinnell boulevards.

Plans to build about 300 new market-rate apartment homes in Security-Widefield are moving forward after El Paso County commissioners on Tuesday unanimously approved a request to rezone the approximately 23-acre parcel where they will be built to allow multifamily housing.

Colorado Springs-based owner Cygnet Land wants to build about 300 to 350 apartments in approximately 10 multifamily buildings on the parcel at the southeast corner  of Powers and Grinnell boulevards, just south of the Amazon warehouse, said Chris Lieber, a principal with N.E.S. Landscape Architects. N.E.S. is the owner's consultant on the project.

Each three-story building will include about 20 to 40 units built on about 16.75 acres of the parcel. On-site parking, a clubhouse, pool, open space and play area also could be developed on the site, planning documents show. The remaining 6.37 acres will be used for rights of way.

The proposed building density is about 18 to 21 units per acre, well under the maximum 30 units per acre allowed by the new land designation, Lieber said.

The land was previously designated for agricultural use, county planner Kari Parsons said. It is surrounded by urban residential developments to the east and the south, consisting of single-family homes on 7,500-square-foot and 5,500-square-foot lots. The property to the west is undeveloped agricultural land constrained by shallow groundwater and ponded water.

The master plan also recognizes a shift toward and a need for more rental units, Lieber said.

"This provides that in kind of a unique way along the corridor," he said. "We think this is a great place for that, quite honestly, given (the site's) proximity to the work centers directly to the north with Amazon ... certainly the high-tech uses within the airport area and, of course, the entire Powers corridor."

The property also lies within the Waterview Sketch Plan originally approved in 2001 and amended several times in the decades since — most recently last July, Parsons and Lieber said. The approved sketch plan has always allowed the development of multifamily units, they told commissioners.

Primary access to the development will be from Grinnell Boulevard via Goldfield Drive, Parsons said.

Off-site road improvements are required on Grinnell Boulevard, Goldfield Drive and Cudahy Road. Crews will build a signalized intersection at Grinnell and Goldfield as part of the new development. They also will widen Grinnell from a two-lane to a four-lane road to accommodate additional future traffic, Parsons said.

Lieber also said the developer and the Colorado Department of Transportation are working to dedicate or reserve right of way at the northwest corner of the property, at South Powers and Grinnell boulevards, for a future planned interchange. Powers is a state highway.

During neighborhood meetings in the spring, residents living adjacent to the property expressed concern that the new development would include more parks space while the existing surrounding residential developments do not.

But the community is close to several parks and trails within walking distance, Lieber said, including Windmill Mesa Park to the west, Widefield Community Park to the south, Bluestem Prairie Open Space and Big Johnson Reservoir to the southeast, and a secondary regional trail along Grinnell Boulevard.

Parsons said planned regional trails in the area will connect the new development to the Bluestem Prairie Open Space and, via sidewalk, to the Windmill Mesa Park.

Plans to add more than 1,200 homes in the Waterview North development near Security-Widefield are going forward.