Such review is important, given the racial tensions across the nation and questions raised by some city residents, Polis said in a statement.

“I encourage the El Paso County District Attorney’s Office to consider turning the investigation’s findings over to another local jurisdiction for independent review, and if warranted, additional information gathering,” he said in the statement.

THREAD: My statement on the investigation of De’Von Bailey’s death:

“Our nation is grappling with difficult challenges concerning race and how we treat one another. It is more important now at this moment in time that our law enforcement agencies go above and beyond to maintain 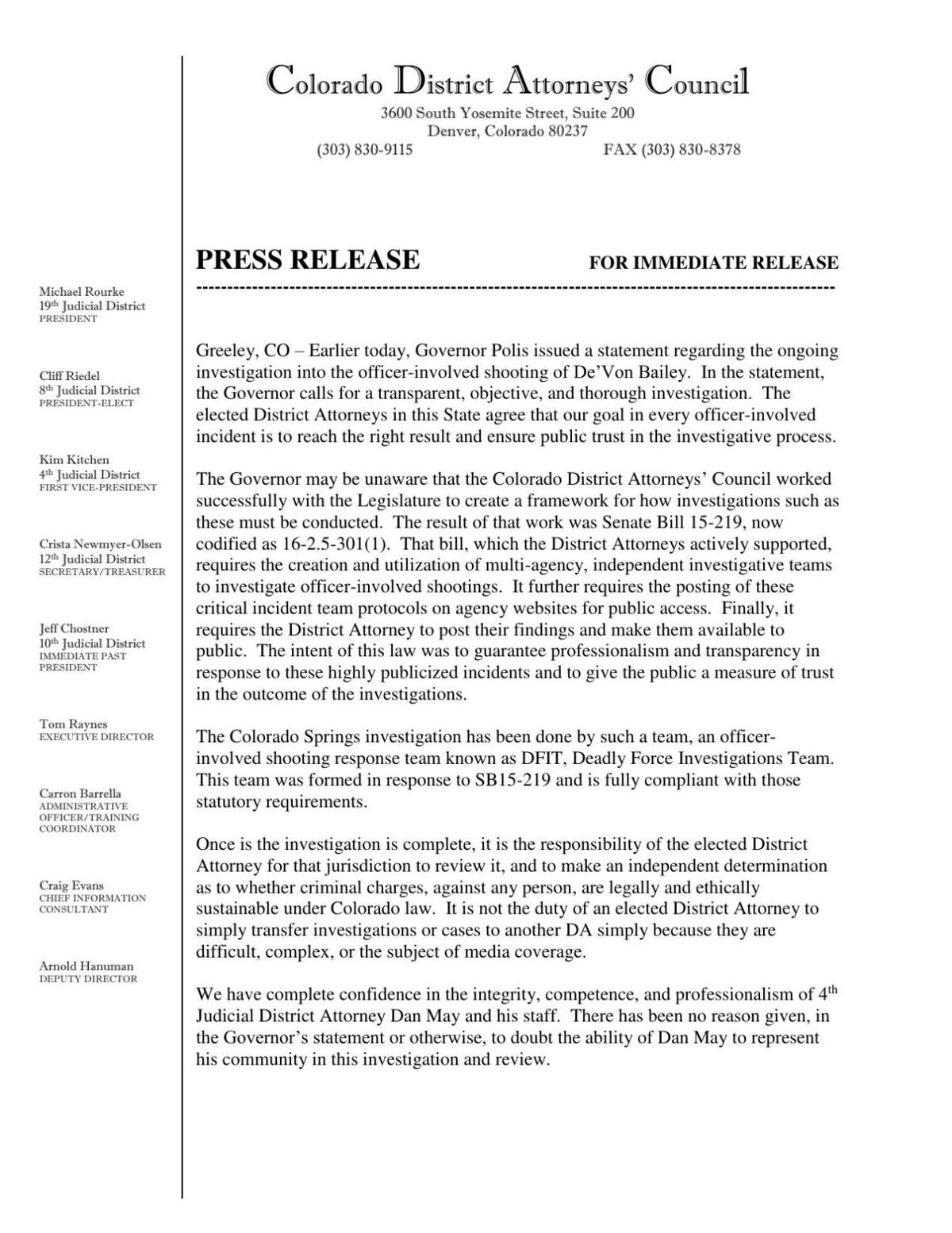 Bailey, who is black, was shot four times in the back Aug. 3 by two officers investigating a reported armed robbery.

Polis’ call for an independent investigation was opposed by Colorado Springs Mayor John Suthers, a former prosecutor, who issued a statement accusing Polis of being “politically motivated.”

“I’m concerned that he suggests a precedence with impacts he has not yet considered and does not understand, to include undermining the will of the people, who elected the public officials charged with carrying out legal responsibilities,” Suthers said in a statement Thursday.

He said the governor’s statement fails to cite “legal or ethical basis” that would require 4th Judicial District Attorney Dan May to recuse himself.

In a series of tweets Thursday afternoon, May defended the impartiality of his office and briefly outlined what the possible outcomes of the investigation are.

“The 4th Judicial District Attorney’s Office is committed to a thorough, fair and neutral review,” May said. “At the completion of the review, and as with all officer-involved shootings reviewed by this office, we will release a statement detailing our findings — either criminal charges are filed, the shooting is ruled justified, or the case is sent to a grand jury.”

He added that his office has been communicating with Bailey’s family throughout the process.

3 of 3) And as we’ve said, the 4th Judicial District Attorney’s Office has been in contact with De’Von Bailey’s family (and their local attorney) and we will continue to keep the family apprised.

Suthers acknowledged the emotion the shooting is causing but again urged patience.

“Some in our community are experiencing a great deal of emotion. I recognize that and empathize with all impacted. But this is a time for healing and allowing legal processes to run their course and not to act with political expedience.”

Mari Newman, an attorney representing Bailey’s family, said they are “in total agreement” with Polis that an independent investigation is necessary.

“In order for the community and the family to have any faith whatsoever in the integrity of the investigation, it needs to be a truly independent body,” Newman said.

A rally was planned later Thursday at City Hall to call for an independent investigation.

The shooting was investigated by the El Paso County Sheriff’s Office, which turned over its findings last week to the DA’s Office, which will determine if the shooting is justified and if the officers should face criminal charges.

Under Colorado law, a neutral agency typically investigates whenever deadly force is used by a law enforcement officer. But the close ties between the city Police Department, county Sheriff’s Office and the DA’s Office has led some to question whether the agencies can be unbiased.

Bailey was shot and killed after he and a cousin, Lawrence Stoker, were stopped by officers on Preuss Road near Adams Elementary School after a 911 caller reported being robbed by two men, one of whom had a gun. Bailey and Stoker matched the description of the suspects in the armed robbery, police said.

Protests over police brutality and racial discrimination erupted the same night after witnesses posted on social media that Bailey was shot numerous times in the back and didn’t appear to be armed.

A surveillance video obtained by The Gazette two days later showed part of the confrontation between Bailey and officers. In it, Bailey is seen running toward the school, then falling to the ground as two officers come into view with their guns drawn.

After that video was released, about 60 people demonstrated outside City Hall, then marched to the Police Operations Center. Two white bail bondsmen were arrested outside police headquarters when they drove up on their motorcycles and drew handguns while arguing with the protesters.

Both are ordered to raise their hands, and Evenson tells them he is going to search them for a gun. Before he can do so, Bailey turns, drops his arms and runs with his back to the officers and his hands in front of him.

The officers draw their guns, order him several times to raise his hands, then open fire at his back. Bailey was hit four times, three times in the back and once in the elbow, according to the autopsy report.

Bailey is the fifth person killed by Colorado Springs police this year. The DA’s Office has ruled two of the shootings justified; the other three remain under investigation.

Using the word "murder" to describe the police killing of a 19-year-old black armed robbery suspect earlier this month, about 60 people protes…