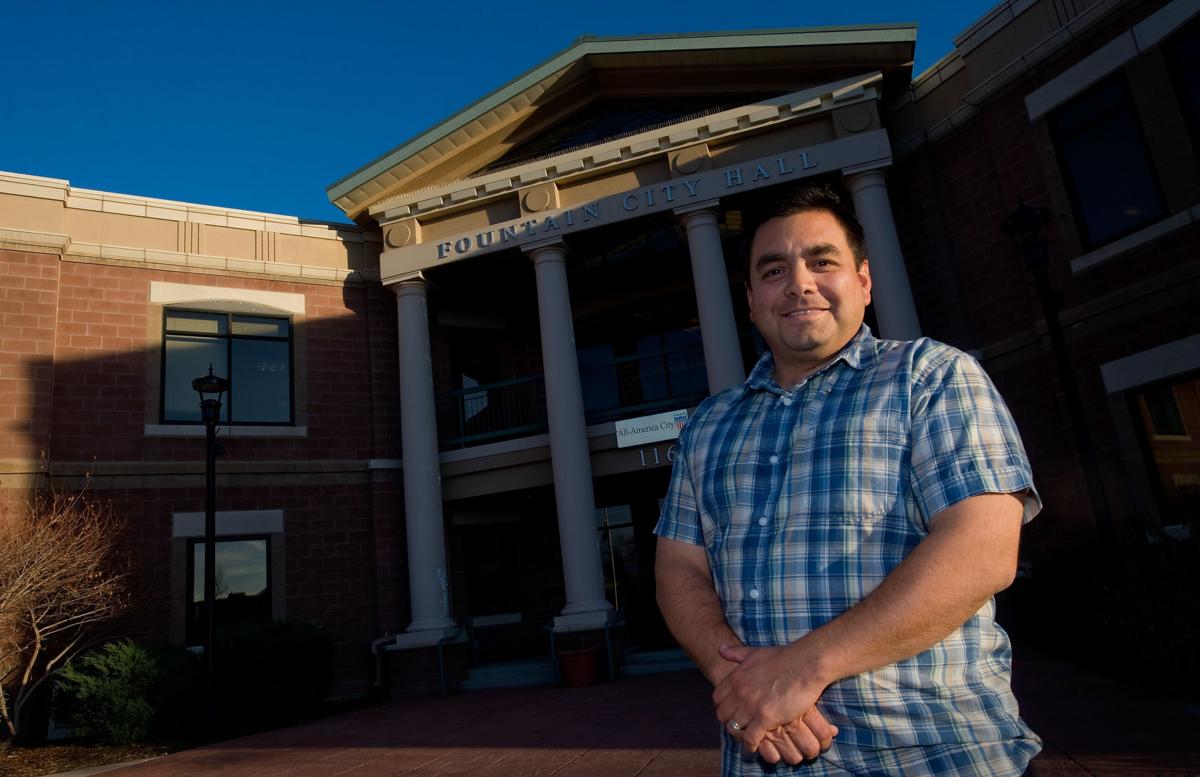 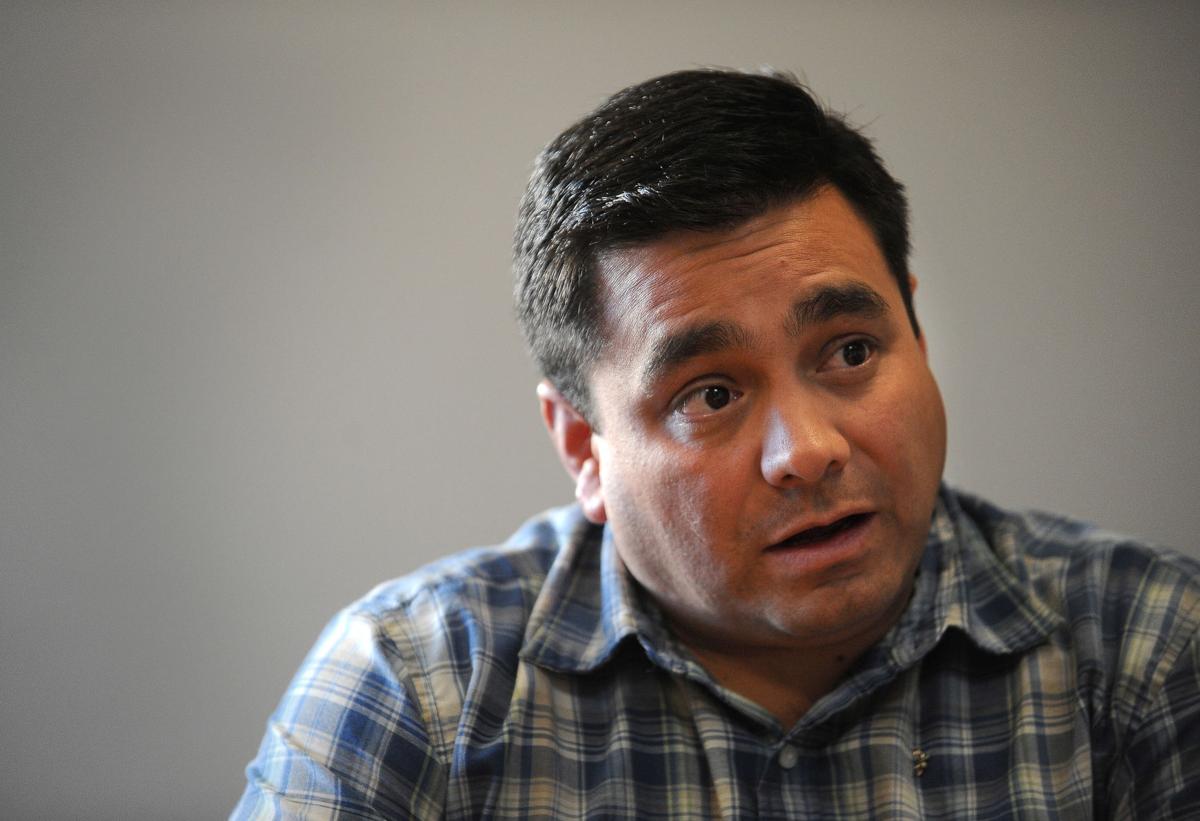 Ortega served on City Council for the last seven years, including four as Mayor Pro-Tem. He is a husband to Abby and father of three kids - Isabella 10, Sofia 8 and Nick 1.

The Fountain native and graduate of Fountain-Fort Carson High School sat down with The Gazette on Thursday and shared his thoughts on the challenges that face the city, him as mayor and the incoming city council.

Q: What major things have been done since you've been on council to move Fountain in a positive direction?

"We've been dealing a lot with growth. We're one of the fastest growing cities in the county, if not the fastest. We've just been dealing with growth and providing services for everybody involved. We've been working with urban renewal and we've started the Fountain Valley Foundation, in which I was a founding board member, to help bring in money for other projects in the city."

Q: What are the pros that came along with the rapid growth in Fountain?

"We've been able to offer a lot more variety to our residents. We're obviously a bedroom community to Colorado Springs. Before, if you wanted to do anything, shop, eat, whatever, you had to go into the Springs to do that. And so we lost a lot of our sales tax that way. That's the way it had been for ages. Once this growth came in, we were able to start offering more things down here for people to stay and spend their money. And in turn that helped with our growth financially. And so we've been able to provide a lot more in services for the city as well. We've been able to build our new fire station and expand our police station. We're still hurting in our fire department as everyone knows, so we need to work on that."

Q: And what are the cons of growth?

"It came really fast and there was a lot of learning we had to do. So things we may not have done so great, so we've had to learn and fix along the way. I think it helps us the further we get along. We're able to use those experiences. We are looking at growth to continue. With the helicopter brigade coming to Fort Carson, we are expecting to see that growth happening here."

Q: How important is downtown revitalization to Fountain right now?

"I think it's very important. There's a strong part of the community who really feel like we've kind of neglected that area, and rightfully so. Most of our growth has been to the north part of town. That has lent itself to bringing in the box names like Lowe's and Safeway and the bigger monies. Here we're really landlocked with what we have, but I think it's a commodity that we're really missing out on. You have Manitou Springs that has its downtown that is really vibrant. You go to a lot of smaller communities and they really use that for the tourists and getting people to come in. So we think that it's a big deal. The good thing we have right now is that a lot of those businesses and those partners are the ones doing the work. We as a city are there to support them and help guide them, but its really those business owners that are doing the work. I think it means more to them that it's not a city responsibility. We're here to help and so it's been really positive. We're hoping it's going to bring a lot more people down to this area as well."

Q: What are a few of the most important things the mayor and council need to do to ensure that more businesses and visitors will come to downtown?

"Just keep the focus on that revitalization. We have a number of people who are concerned enough that we've put a committee together we've done some things and it's over a couple of months later. This has been a real strong-willed committee. They see the value. It's been one of those things that we're hoping people are going to come in and they'll want to stop, maybe grab something to eat, get some ice cream. We're also targeting the area near 7-Eleven to the south to get people to come in and stop for a little bit."

Q: Has the growth in public safety departments kept up with growth in the population?

On the fire side of things, we have an equally good chief. The issue there is we've been finding it hard to grow with the town. We brought the (ballot) initiative (for more money) back this year, we tried last year. We only have at most six paid firefighters on during the day for a city of close to 27,000 people. And so, trying to grow with that is hard. The other issue that has happened is all the growth is happening away from our stations. All of our residential growth is to the east of town. We have no fire station. We don't have anything out there. Our streets to get there are only two lane roads. It's a problem trying to get to the east where we have an elementary school and a high school. We've really been struggling in that area. I think we're all committed to figuring out how we're going to fix that problem."

Q: In the next year, what do you and the council need to do to make sure those fire needs get handled?

"That's the big question. It's a struggle. We were really counting on the taxpayers to help us out. We're going to have to go back and look at the overall budget as a city. And figure out what we need to do as far as moving some of that money around if we can. Secondly, we need to look at what our service is as well. How are we going to keep that service going with the little manpower we have? It's going to be a long year trying to figure that out. We're going to have to put our heads together and bring in some community members to solve it at least for the short term."

Q: What's your opinion on smart meters and the attempt to ban them?

"For me smart meters are an upgrade to the system that we had. I personally do not feel there's a health risk, anymore than driving down the road. The big brother aspect, while there's a valid concern for many people I think there are ways for us as a city to make sure those issues never happen. It's been our commitment that we want to work with everybody in moving that project forward. The simple matter is that we needed to replace our meters. The majority of the people I talked to didn't see the concern. I think that's why that (ballot) measure didn't do too well."

Q: Why is opting out of recreational marijuana sales a good thing for Fountain?

"It's still an unknown. It's still something that there's not a lot of clarity on. It's still illegal federally. We've heard a lot of concerns coming from Fort Carson. And that was enough of a concern for us here as well. We're not ready to try to tackle that problem. We went through a pretty large ordeal when it came to medical marijuana. It actually divided the council. It divided the city at the time. It was very conflicting for a lot of people. Personally I think there is some value in medical marijuana, but there's some research that needs to be done. With recreational, I would rather see federally and with the state for them to get there ducks in a row. And we'd follow them if that's where we decide to go in the future. I don't know if that's ever going to happen. It's too big of a bull in a china shop.

We have told that our soldiers are going to be held accountable if they're caught with it whether it's legal or not. While they're off base, if they get caught, they're going to face some pretty heavy penalties. Is it going to go away? No it's not, but we don't want to get those guys in trouble. They're dealing with a lot and we don't want to add to the problem."

Q: What are the biggest challenges for the city in helping the military residents of Fountain face?

"We've really tried hard to offer them a place they can call home. When I was a kid, a lot of my friends, it was never really their home. It was just the place that they were at for the time being. When dad or mom are deployed that they know their kids are taken care of. We offer a lot of downtown events. We offer a lot of sports and things so the kids and the families can know they're really a part of Fountain. I've met a lot of people the past few years who have said, 'We're getting out of the army. We're going to stay here. This is a great place to be.' That's a tribute to both the city and the school district."

Q: As you move from council to mayor, what do you see as the biggest challenge?

"Bringing a common vision to council, to the staff and then to the community at large. My hope is to kind of bring people back together and understand why we're here in Fountain together, why we're a community. We're not about going to Colorado Springs. We're not about Pueblo. We are about Fountain."