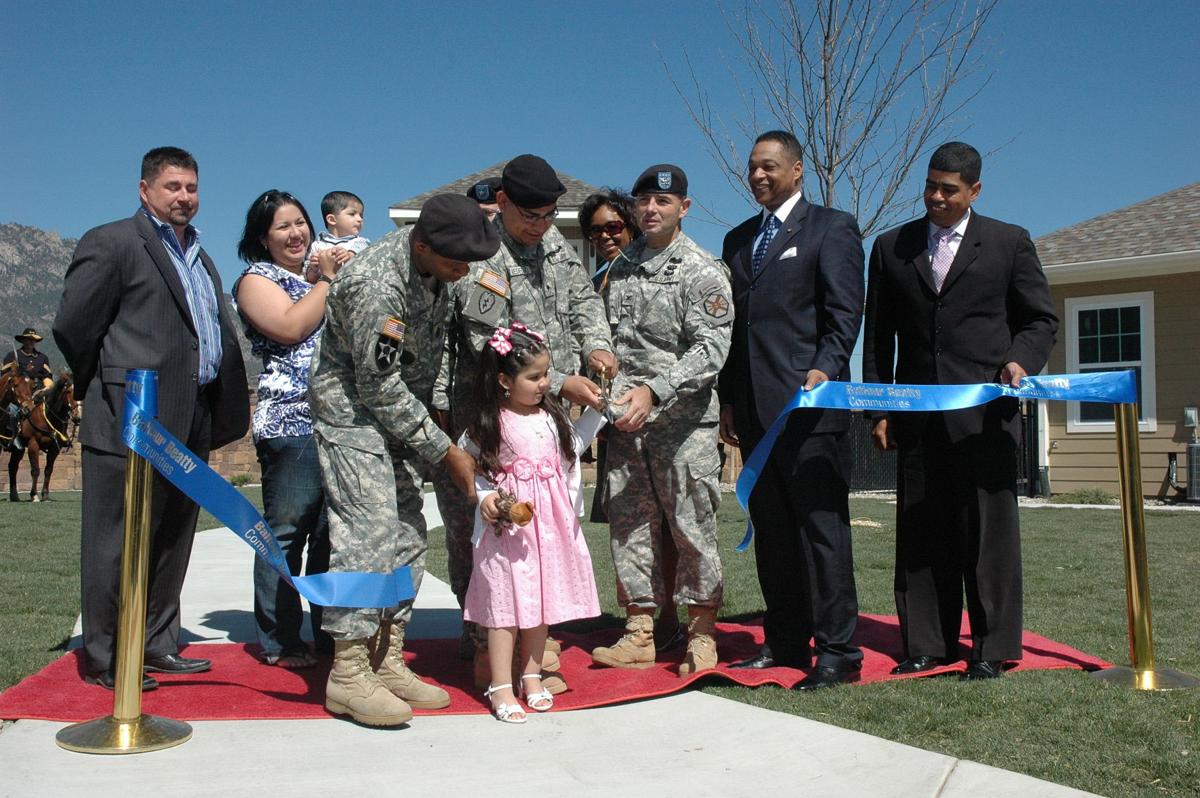 Esmeralda Medrano, 4, helps her dad, Spc. Jesus Medrano, cut the ribbon at Thursday's ribbon-cutting ceremony for Chippewa Village, Fort Carson's newest housing development, while her mother, Angelica, and brother, Jesus IV, look on (second from left). Once completed, the development will provide the families of 180 junior-enlisted soldiers with four-bedroom houses. 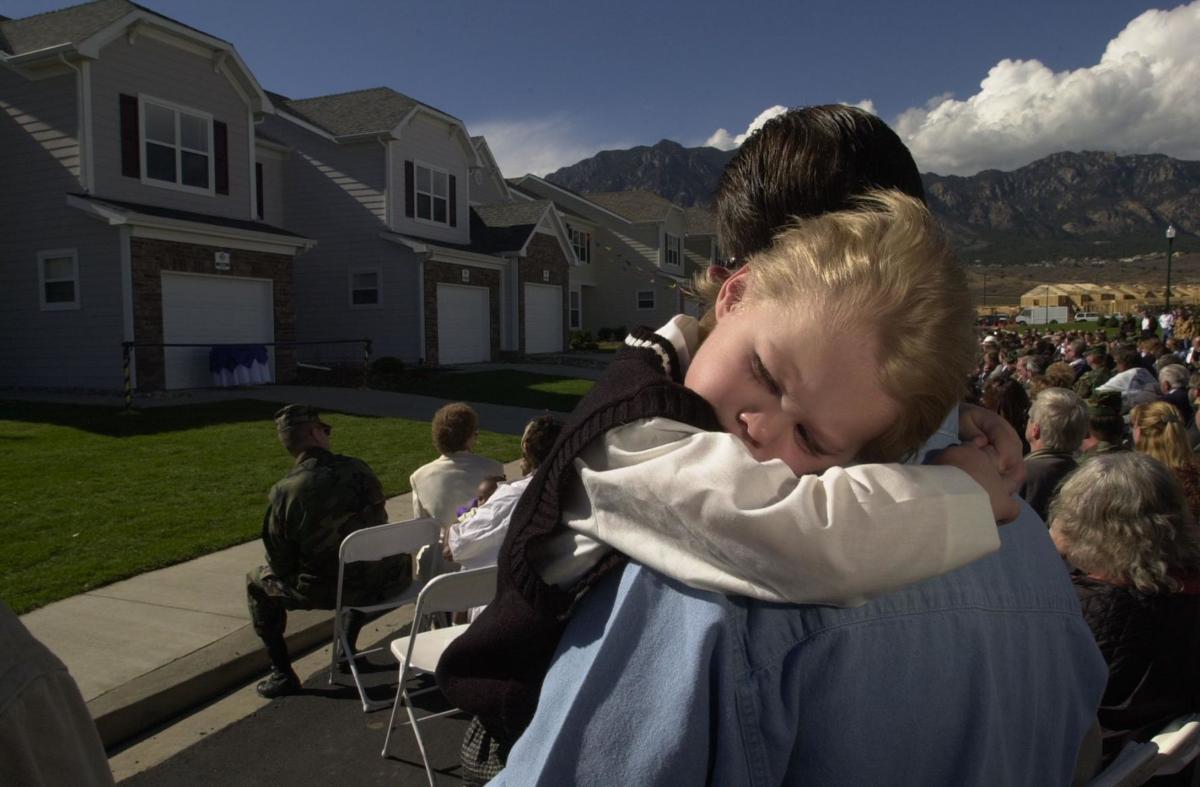 Three-year-old Austin Smith rests on his dad's shoulder during a ceremony at Fort Carson Tuesday cutting the ribbon on the post's new housing units. Austin's dad, Rocky Smith is one of the contractors building the new homes. Reis

Esmeralda Medrano, 4, helps her dad, Spc. Jesus Medrano, cut the ribbon at Thursday's ribbon-cutting ceremony for Chippewa Village, Fort Carson's newest housing development, while her mother, Angelica, and brother, Jesus IV, look on (second from left). Once completed, the development will provide the families of 180 junior-enlisted soldiers with four-bedroom houses.

Three-year-old Austin Smith rests on his dad's shoulder during a ceremony at Fort Carson Tuesday cutting the ribbon on the post's new housing units. Austin's dad, Rocky Smith is one of the contractors building the new homes. Reis

Fort Carson officials vowed to improve on-post housing after a scathing report found decrepit conditions and poor maintenance at installations across the country, prompting an outcry from some congressional leaders.

“Are we perfect? Absolutely not,” said Col. Brian Wortinger, the post’s garrison commander. “Are we trying awfully hard? Yes, we are.”

The move came after a survey by the nonprofit Military Family Advisory Network found problems at more than 160 locations across the U.S., including every installation with privatized housing in Colorado. By far the most complaints came at Fort Carson, which has about 18,000 people living on post — roughly 10,000 of whom live in privatized family housing, the focus of the report’s concerns.

The report logged 147 complaints, topped by concerns about maintenance and service by the company that oversees post housing, Balfour Beatty Communities. Nearly 2½ times as many people gave the company negative scores, compared with positive reviews.

Wortinger acknowledged that more needed to be done to help soldiers’ families who sacrifice so much through their service.

“We absolutely owe our service members and their families the absolutely best quality housing that we can provide, because they are my brothers and sisters,” Wortinger said.

From mid-February through Wednesday afternoon, 10,995 work orders had been submitted for improvements to housing on the post, Wortinger said. All but about 500 of those had been completed, with “the vast majority” of them done within preset timeliness standards for that work.

The fixes included 253 emergency work orders, such as flooding from faulty plumbing or someone being locked out of their unit.

The rest ran the gamut, including bad carpeting, electrical issues, faulty smoke alarms, leaking faucets and broken blinds, Wortinger said. Many people also complained of mice in their units — leading the post to establish a system for responding to rodent concerns within 24 hours.

Many of the work orders came during inspections of all 3,446 family housing units during a three-week stretch this year, when criticism of on-post housing was mounting by the Military Family Advisory Network.

The nonprofit’s most recent report, released in May, found that across the nation, maintenance issues topped the list of concerns by respondents, including at each Colorado installation with housing.

At Fort Carson, for example, 63% of respondents said their units needed better maintenance, repairs or remediation — slightly higher than the national average of 56%.

Every existing unit was renovated in 1999, when the Army privatized its housing, said Hal Alguire, the post’s director of public works. But maintenance of those units has since lagged — leading to the current complaints.

Fort Carson’s public works department also added four staff members to help ensure that work orders are being processed. He said the post is working to ensure all concerns affecting the life, health or safety of family members are being addressed, and that all units are properly serviced before anyone moves into a unit. He also said 5% of work orders are being followed up by Army personnel after their completion, to ensure they were completed correctly.

An after-hours call by The Gazette to Balfour Beatty Communities on Thursday was not returned.

The response comes as Fort Carson also grapples with extensive damage from a powerful storm that pummeled the post in August with baseball-size hail.

Repairs to the military’s infrastructure is expected to cost $50 million, and another $30 million is being spent replacing the roofs and thousands of windows of houses damaged in the storm. Those repairs are expected to continue through January.

Wortinger, the post’s top officer in charge of the post’s infrastructure, as well as family and recreational programs, said he hasn’t been immune to issues with Balfour Beatty’s work, either. A worker replaced a mirror with a smaller version — leaving untouched a vast area of unpainted wall where the old mirror had been. He had to contact the company again to have the wall repainted — a request that was quickly answered.

But he knows that unfortunately hasn’t been the case for everyone.

Wortinger emphasized that if residents have not received help through Balfour Beatty or the post’s housing office, to contact his office directly.

“If residents feel they have not achieved satisfaction with where they are in their home, reach out,” Wortinger said.

On this day 75 years ago, soldiers from Fort Carson's 4th Infantry Division stormed Utah Beach on the Normandy coast of France amid chaos and conspicuous valor. The day started badly for the division when its ships arrived at the wrong point on the coast. But a hero arose who braved heavy enemy fire and became the highest-ranking member of the division to ever earn the Medal of Honor. He was also the first member of the division to earn the nation's top decoration for battlefield valor. The division's deputy commander, Brig. Gen. Theodore Roosevelt Jr., son of the famous Rough Rider president, took charge on the beach despite gimpy knees. Wielding his cane, he led the 4th Division soldiers inland to victory.