Construction on the Life Time Fitness Center at Powers Boulevard and Briargate Parkway, shown Dec. 16, has been put on hold because of the economy. Photo by Jerilee Bennett, The Gazette 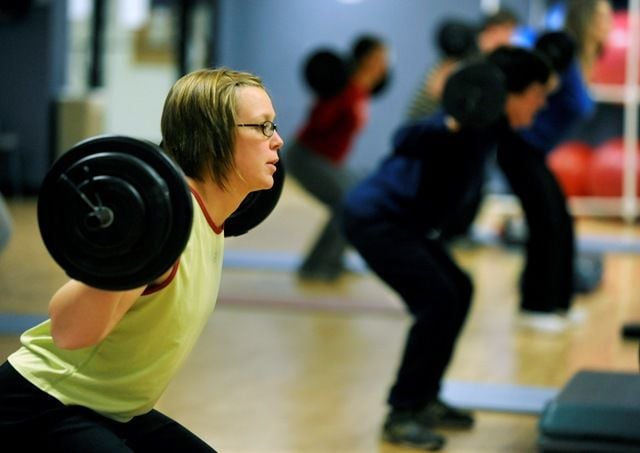 Some fitness centers are thriving in Colorado Springs despite the economy. At Westside Fitness, Tamara Sobin lifted weights in a popular exercise class on Dec. 16. Photo by Jerilee Bennett, The Gazette

Construction on the Life Time Fitness Center at Powers Boulevard and Briargate Parkway, shown Dec. 16, has been put on hold because of the economy. Photo by Jerilee Bennett, The Gazette

Some fitness centers are thriving in Colorado Springs despite the economy. At Westside Fitness, Tamara Sobin lifted weights in a popular exercise class on Dec. 16. Photo by Jerilee Bennett, The Gazette

The fitness industry typically starts the new year with a bang as couch potatoes, fired up by New Year’s resolutions, head to the gym.

About 12 percent of gym memberships are added in January, the most of any month, said Rosemary Lavery, public relations manager for the International Health, Racquet and Sportsclub Association, a Boston-based trade group. While this isn’t necessarily a make-or-break period for fitness clubs, she said, “it’s definitely an important time of year.”

And this year, the January rush should offer some clues as to how the fitness industry is faring as the economy gingerly steps from recession to recovery.

According to the IHRSA, the industry has been long thought to be, if not recession-proof, at least recession-resilient. The numbers seem to bear that out. Though figures aren’t in for 2009, revenue from North American fitness clubs rose nearly 4 percent in 2008 from the year before, and membership grew by more than 10 percent, according to the IHRSA.

“Obviously, the recession has affected every aspect of business,” Lavery said. “There have definitely been clubs that have done well, and others that haven’t.”

“I would estimate that we probably have grown 15 to 20 percent in the last four months,” said Duane Johnston, co-owner of Accolade Fitness, 4390 Arrowswest Drive, on the city’s northwest side. He’s looking at expanding the operation.

That’s not to say the sour economy has had no effect. Life Time Fitness planned to open a $33 million, 180,000-square-foot club at Briargate Parkway and Powers Boulevard, on the city’s far north side, last summer. Instead, the building sits unfinished and construction is in limbo — a victim of the economic slowdown.

The company has not walked away from the facility, said spokesman Jason Thunstrom. “This is a project that very much remains part of our plans,” he said. But he could not offer a time frame for the resumption of work and the opening of the club.

“Once the capital markets started to seize,” Thunstrom said, “we made a decision to pull back from doing eight, nine, 10, 11 facilities a year — each of which is in the $30 million to $35 million range — to three.”

“We’d like to be adding clubs, which we certainly aren’t doing at this point,” Poling said. But he said business is healthy and membership is growing at the one Gold’s Gym in town, in the Briargate neighborhood at 7655 N. Union Blvd.

About a year ago, Money Magazine surveyed readers to learn what they would not sacrifice in the recession. Nearly half said they would not give up their health club membership — ahead of categories such as eating out or big vacations. Research by IBISWorld, a market-research organization, has shown similar results, Poling said.

Johnston, of Accolade Fitness, tells the story of a couple of people who came in about a month ago after losing their jobs. Instead of canceling their memberships, he said, “It was along the lines of, ‘Well, no excuses, now we have time to work out.’ ”

“I think our key is that we are $20 a month, and it’s just one of those things that really doesn’t hit people that are having problems with money,” Johnston said. “Twenty dollars isn’t what’s hurting them. It’s a $60 dinner or a $100 car payment or whatever.”

Accolade Fitness opened on Arrowswest Drive last April, after two months down the street at Garden of the Gods Road and Centennial Boulevard, where it took over the operations of a Planet Fitness. Another Planet Fitness, at 1785 S. Eighth St., became Westside Fitness; a third location, on Austin Bluffs Parkway, closed.

At Westside Fitness, membership has grown by about 30 percent since the change, owner Zach Hoerth said. He attributes that to a high emphasis on customer service and cleanliness, along with the addition of exercise classes. Planet Fitness, he said, was “bare bones, the big empty room with the equipment and come and get your workout.”

Westside Fitness and Accolade Fitness are among gyms that are reducing or eliminating sign-up fees this month as they seek to woo customers.

“We’ve been fortunate to do well and I’m definitely anxious to see what happens in the traditionally strong part of the year for this industry,” Hoerth said.