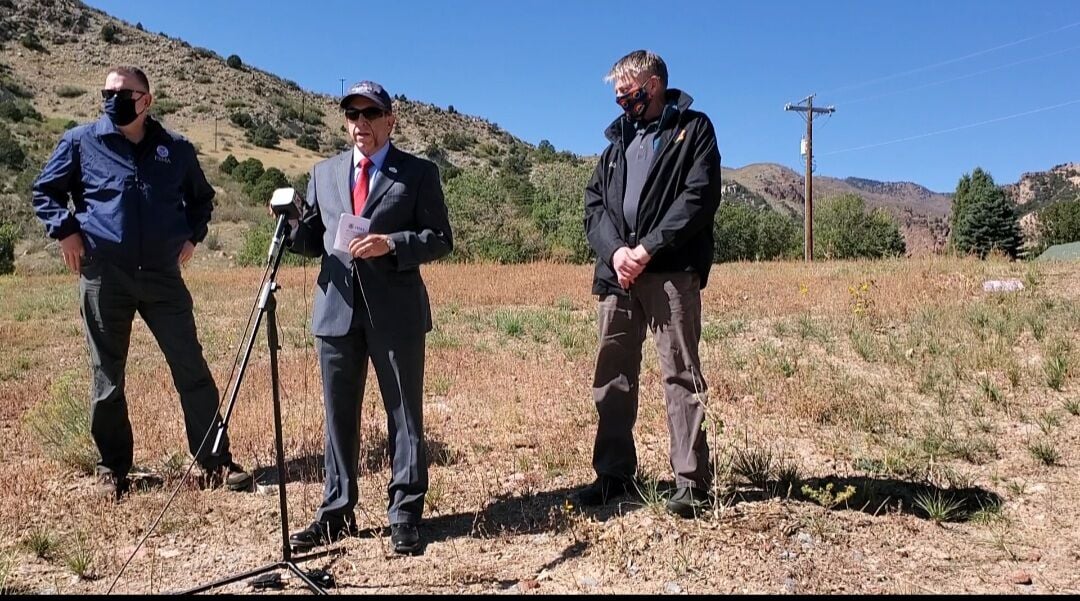 Federal Emergency Management Agency Administrator Pete Gaynor toured the Garden of the Gods Flood Mitigation Facility on the city’s west side Monday, noting the importance of preventing floods to avoid having to clean up after them.

"The more we can invest in mitigation upfront, the less we have to worry on the back end about not only the cost, but the damage to property and lives that we’re trying to save," Colorado Division of Homeland Security and Emergency Management Director Kevin Klein said.

Klein also noted changes in weather that have made flooding and fires more severe.

"It's all part of a bigger picture. We're seeing more extreme weather events, more fires and post-fire flooding," Klein said. "So not only is it important to invest in fire mitigation, but we need to invest in these (flood mitigation) projects."

He recalled the devastation of the 2012 Waldo Canyon fire that burned through 18,247 acres of land, including 10 square miles of what is the drainage basin for Camp Creek, which runs through the area to Fountain Creek and eventually to the Arkansas River. The fire’s burn scar, coupled with downpours common in the summer, created an increased risk for flash flooding along Camp Creek and the North and South Douglas Creek Watersheds, according to the Garden of the Gods Flood Mitigation Facility website — and the previous detention facility on site was inadequate, Suthers said.

“When we saw the aftermath of the Waldo Canyon fire, it was very clear we needed to do something much more dramatic,” Suthers said.

The stormwater detention and sediment collection facility in the far northeastern portion of Garden of the Gods has the capacity to hold 169 acre feet — or 330,000 gallons — of water, city leaders said.

Totaling nearly $9 million, it was completed in 2019 to protect the park, Rock Ledge Ranch and downstream residents by reducing flood risk, according to the website. Most of the funding for the project — $6.6 million — came from FEMA.

The facility temporarily stores a portion of Camp Creek’s floodwaters before releasing the water downstream at a lower rate and over a longer period, reducing flooding. The facility also captures the large volumes of sediment that race down the hillsides, improving water quality before it’s released into the channel running through the park, Rock Ledge Ranch and the 31st Street corridor.

Completion of the facility allowed about 100 properties to move out of FEMA’s regulated floodplain through a map revision process, said Public Works Director Travis Easton. Not only are residents saving money because they are no longer required to carry flood insurance they're safer because the floodplain footprint has been changed, Colorado Springs Stormwater Enterprise Manager Richard Mulledy said.

Colorado Springs ranked no. 1 in a recent survey that studied 100 of the best fall vacation destinations and COVID-19 safety measures nationwide.