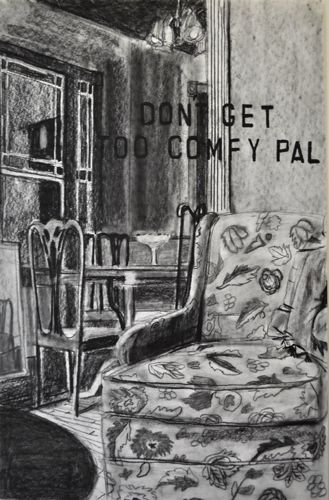 "Don't Get Too Comfy Pal" by Liz Maugans Photo by 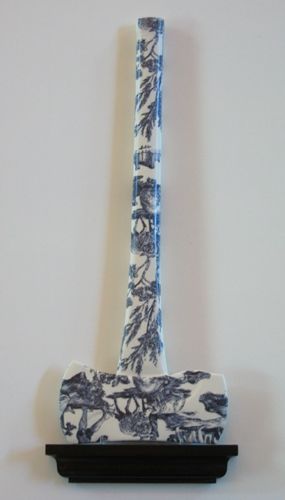 "Everyday is Like Sunday" by TR Ericsson Photo by 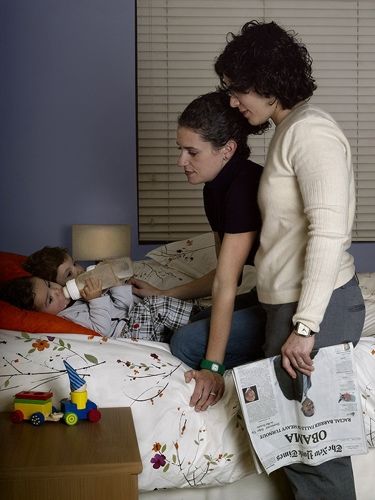 "States of Union No. 3" by Alix Smith Photo by

"Don't Get Too Comfy Pal" by Liz Maugans Photo by

"Everyday is Like Sunday" by TR Ericsson Photo by

"States of Union No. 3" by Alix Smith Photo by

Three pieces in “A Family Affair” were used as inspiration for writers who entered “Rough Writers: A New Play Fest,” which is also part of the multi-disciplinary project and will debut in April. Playwrighters’ scripts had to be based on one of the three works pictured: “States of Union No. 3,” “Don’t Get Too Comfy Pal” and “Everyday is Like Sunday.” The work, “Enough,” from the “Mother” exhibit, is Carol Dass’ favorite. All four artists provided a bit of back story for each piece.One word can press your buttons like no other: Family.

The Fine Arts Center will explore its permutations in “Families,” their fourth multi-disciplinary project since 2009 that includes art, theater, dance, films, art classes and lectures.

“It’s a hot topic,” says Sam Gappmayer, president and CEO of the Fine Arts Center. “I’ve read major articles in Atlantic Monthly and three to four other publications about families and issues that sociologists have raised on so many levels.

“What does constitute a family? What should? What shouldn’t? It’s clear it’s all changing very rapidly.”

Though our definition of family is ever changing and expanding, it is a starting point of conversation for all of us.

“With limited exceptions, we all grew up in families. It’s a core experience we all have. There is value in talking about it and drawing from those.”

In the multi-disciplinary tradition, a wide range of events will surface under the “Families” umbrella, including the Colorado premiere of the 2012 Pulitzer Prize finalist and Tony-nominated play, “Other Desert Cities,” on March 14. In the play, a woman goes home to her family on Christmas Eve, carrying a tell-all memoir that reveals a family secret.

“It gives us the opportunity once a year to come together and talk about how we can enhance each other’s programming,” say Levy, who is director of performing arts and producing artistic director the FAC. “For the broader audience, it gives people the opportunity of different ways of accessing the work at the Fine Arts Center.”

In April, Ormao Dance Company and The Story Project will set performances around the theme, and throughout the next few months, there will also be lectures, workshops and art classes.

“There’s value in creating crossover experiences and offering visitors multiple points of intrigue,” says Gappmayer. “It can take them into arts that they’ve never been to before. They can see ‘Other Desert Cities’ in the the theater, and then explore the theme in the galleries. They can have a deeper, richer experience with the subject.”

The Fine Arts Center began their multi-disciplinary series four years ago with “NASA | Art: 50 Years of Exploration.” “Conflict | Resolution” went up in 2010 and “Resilience” in 2012. Some visitors may realize the interconnectedness of the multi-disciplinary project, and attend all of the events, Gappmayer says.

“There are some who know they just went to a great play or exhibit.”

The two exhibits will speak to how family shapes our lives. Biological, nuclear, friends or a family you’ve married into, they’ve all had an influence on us, says Joy Armstrong, who curated the Fine Arts Center exhibits.

“It’s always a good time to talk about acceptance, tolerance and love,” says Armstrong. “The world is so traumatized ... How can we better come together as a community, and look at that as a family unit? How can we better love and support each other and create a culture not of hate, but of acceptance.”

Selections from The Progressive Art Collection are courtesy of Progressive Corporation, an insurance company based in Cleveland, OH, but with local offices. The collection was started in 1974, and now includes more than 7,800 pieces of work from emerging artists. About 70 of those will be featured in the “Families” show, says Armstrong.

Local photographer Carol Dass, a photography instructor at the University of Colorado at Colorado Springs, will show 29 photos of her mother Mary as she goes about her days.

“This body of work, I use the word heartwrenching, and not in a sad way. There’s this beautiful, sentimental quality to it,” Armstrong says. “They’re tender, and in some cases, they’re funny. It’s a testament to how our family relationships change from being a parent and a child to those roles completely reversing later in life.”

“Everyday is Like Sunday” is a modeled on an ax given to him by his dying uncle during a four-year span when his family slowly disappeared. His grandfather and uncle died and his mother committed suicide.“He had all kinds of projects going at once, he wanted everything in order, and he was trying to fix every single thing that was wrong before he wasn’t around to fix it anymore,” writes Ericsson, who spent a lot of time with his uncle during his illness. “He said he’d worked too much and he regretted not spending more time with his family.”

Ericsson made a plaster cast of the ax, then created a porcelain model and fired it in a kiln. The linen pattern on the ax came from a set of curtains he found as he cleaned out his mother’s attic. After he made a digital scan of them in Photoshop, the pattern was applied to the ax and refired.

“‘The Everyday Is Like Sunday’ work is totemic, an artifact left over from a time and a mood and a certain set of personal circumstances,” Ericsson says. “Now, of course, these were members of my family, but none of us related to one another in any conventional sense of the word ‘family.’ One could say we were stuck with each other. There was love and loyalty and sacrifice, but none of these catch phrases were experienced in the elevated greeting card manner in which they’re often contextualized.”“Don’t Get Too Comfy Pal”Charcoal drawing, 2010Liz Maugans, Bay Village, OH

A woman’s role in the family and society, plus a bout of insomnia, led to the creation of artist Liz Maugans’ piece “Don’t Get Too Comfy Pal.” The working mother of three decided to put her hours of wakefulness every night to good use, and began to draw the places of her life.

Maugans inherited the chair in the drawing from her parents, who have been divorced for almost 30 years. When she was young and they were still married, though, Maugans remembers how her father would come home after work, plop himself into the chair and try to unwind with a couple of martinis. Her stay-at-home mother made house redecoration her job. She would accost him with patterns and swatches of cloth as soon as he sat down, Maugans says.

“There is major disconnect that can happen in a marriage,” she says. “A third of you is the mom, a third is the wife and a third is your own self. If any of that gets out of whack, and you take on the responsibility of being a mom and wife, you lose yourself. That proportion of my mom’s life was whacked. She became so obsessed with the disconnect between her and my father, and I think that ultimately ruined their marriage. This chair became a sort of legacy.”“States of Union No. 3”Color photograph, 2009Alix Smith, New York City

The photo, “States of Union No. 3,” by Alix Smith, is part of a larger body of portraits that “give historical background and social credence to the validity of family life among the gay community,” she writes.

Based on Norman Rockwell’s works, Smith’s photo pays homage to the classic nuclear family of two parents and two kids at bedtime, but with a noticeable change. Here, two women are partners and parents.

Portraits of gay families creates a wave of validation for the subjects involved that they are indeed a family, Smith writes. The finished product also shifts the definition of what family is for viewers, affirming that these are as much families as any heterosexual one.

“In this instance, it’s less that I ‘created’ an image, and more that I captured a moment in time - one in which the tenderness and love between parents and children is evident,” Smith writes.

Smith resonates with the photo even more today. She and her wife had their first child in June.“Enough”Carol Dass, Colorado SpringsColor photograph, 2010

When  photographer Carol Dass visits her mother, Mary, in Columbia, MO, she always drives her mom, 84, to her Wednesday hair appointment. Dass always brings her cameras. It’s the daily life and routine of her mom that interests the photographer most, though it took the death of her father and the passage of a few decades to get to that point.

“When we grow up, we don’t see them as individuals,” Dass says.

It didn’t help that her childhood was less than idyllic.

“She was always busy. She wasn’t one of those June Cleaver moms waiting at home with a plate of cookies,” Dass says. “As a teen, I saw her more as a mother that wasn’t present a lot. I’d go spend nights with friends, and their moms were making big breakfasts, and I was envious of that.”

But as she grew older, Dass realized nobody’s family was perfect, and in her mid-30s, she decided to get to know the woman behind the mother. Now the two travel frequently, to places like Switzerland and Nova Scotia. They go to the doctor, the grocery store, to cataract surgery. And all the while, she takes photos of her mom in the small, mundane moments. Occasionally, though, those moments become a bit too much for her mom, as in “Enough.”

“My mother has been a good sport putting up with my camera always in the periphery,” Dass writes. “Sometimes enough is enough.”

When Dass looks at the “Enough” photo now, she sees the generousness of her mom, who allows the camera to be a third wheel. But she also feels some sadness.

“It’s painful, on some level, thinking about how I yearned to be close to my mother growing up.”